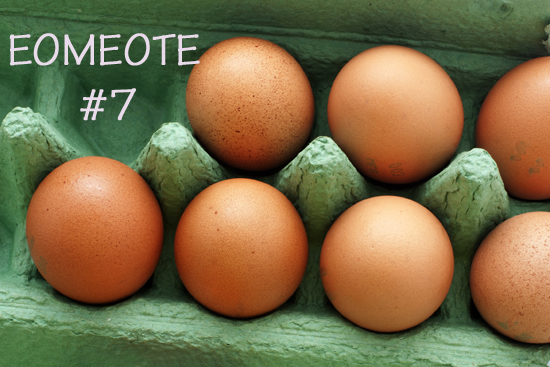 OK, you’ve waited long enough, are you ready for this?? Today you finally get to see the EoMEoTE#7 round-up! Apologies once again for the delay in getting it out but, as explained elsewhere on this blog, events kind of overtook me. But I hope that you will forgive me when you see the sheer number of entries and the mind-bogglingly bad limericks I’ve composed to go with them all…! This month, we had (wait for it) thirty contributions!  Al all time record – well done to all of you!

Karen from The Pilgrim’s Pots and Pans:

Thought she’d give egg on toast a whirl.

Her breakfast of pistou

Just makes you wish you

Could taste all the flavours unfurl!

Our Julia (who’s not from Nantuck)

Focaccia did she toast,

All topped with otak-otak.

Chose to do omelettes with praline.

So delicious is sounds,

There was drooling all round,

But it certainly ain’t lean cuisine!

“I’ll use pizza instead of bread!”

A pizza with egg?

Must be pulling my leg…

But it seems she was very well fed!

Saffron from Writing on a Paper Napkin:

Posts from Saffron just seem to get better:

She followed my instructions to the letter.

What she threw on a plate

She’s the eggy chef with the most.

With onions for flavour,

More toast on egg than egg on toast!

The first thing that our Nicole said,

The minute she got out of bed,

But I got a sandwich maker,

Young ‘Cocoa in Sydney was craving

Egg rolls, and some veg she was saving.

Bread and veg got wrapped

And her culinary audience is raving!

Clare (we hear!) loves to eat

And decided she needed a treat:

French was the toast,

She loves it the most.

Gwenda from Taott was torn:

Egg of mushroom? An idea was born.

Made egg, mushrooms AND toast.

From Noodlebowl we have Sue

Who knows just what to do.

When it’s eggs she bakes,

No shortcuts she takes

Moira from Who Wants Seconds:

Moira, we just wanna be ya!

You’re so fab – so we just wanna see ya

All wrapped in a flour tortilla!

In Baja our Jennifer found

The loveliest dish around.

She tried it at home –

Add an egg and there’s cheers all around.

With the ‘Flower , food’s an adventure

Just the pictures could make me drool!

It’ll all stick together,

‘Cos cheese between layers is the rule.

Augustus Gloop from Grab Your Fork:

In Sydney an idea was born.

A recipe from Bill

Her tastebuds did thrill:

The ideal breakfast in the morn!

The Hubby from Singapore

Made a sandwich I would adore.

If you bite, chew, or lick it.

Please, Sir, can we have some more??

An omelette full of legumes

Is what Catherine cooks and consumes.

She ate and ate,

The taste was great –

But now how to get rid of the fumes??!

To make eggs that were hard-boiled.

The dish was a star –

Her hunger pangs had been foiled!

A chance did Andrew take

When walnut bread he did bake.

It turned out just right

But then he got a fright –

Never toasted the bread: his mistake!

Her eggs in nests are the biz!

But my eye was caught,

I had only one though:

My! What a big chopper that is!!

Shows what egg toasts are all about.

Viv went out – she had no time to spare.

Ate ham with eggs and Gruyere.

For my tongue would be good –

But bad for my big derriere!!

With saffron she likes them a lot.

Are they boiled? are they fried? I think not!

Nupur from One Hot Stove:

There was a young girl from Noo Yawk

Whose parents would often tawk

Of dishes they made

In their own student days:

Sarah from The Delicious Life:

This recipe Sarah’s been saving

With sausage and gravy,

Johanna from The Passionate Cook

Had an eggy idea that’s a runna:

And herbs she diced –

With olives and eggs it’s a stunna!

Bringing up the rear on this bumper edition of eggcelence we have the two co-founders who, all those many many months ago, planted the seed that grew into the mighty oak that is EoMEoTE:

He’ll always be pulling your leg.

But we’re begging you please

We’re down on our knees:

Just tell us: who exactly is Greg??

A girl from London’s East

Felt that her inspiration had ceased.

Then she hit some luck,

And last but by no means least, we have the lovely Elizabeth.  Well, she didn’t actually have any eggs and despite her well-reasoned argument, I don’t accept vaguely egg-shaped mushrooms as a reasonable facsimile of eggs. 😉  However…  she is the only one of you who remembered my decree last month that all this months’ entries were to be submitted as Petrarchan sonnets (that is, before I took pity on myself and everyone else and downgraded that to limericks!!) and wrote one!! Just for that, she gets an honourary place in this month’s round-up.  Elizabeth – you’re a star!!

Elizabeth from Blog from our Kitchen:

Cooksister demanded (and got) a sonnet

And Elizabeth now has to con it:

The sonnet was there

But the fridge was bare!

So though there’s toast, there’s no egg on it!

And just to show that I share your suffering, here’s my sonnet:

To boil or to scramble or to fry:

These questions occupy my every thought.

I rummage through old cookbooks I have bought –

A brand new eggy dish I have to try.

And all my friends, perplexed, are asking why,

In what strange fascination am I caught?

Why is it that each month-end is so fraught,

And tons of eggs and bread I have to buy?

I turn around with my mysterious smile.

So come and play along just for a while

You’ll soon get bitten by the cooking hen.

So I collect a growing band of friends

Who egg me on and join in each month-end.

I hesitate to suggest something even scarier next month – maybe an EoMEoTE submission in the form of a short dramatic work??  The imagination runs wild.  One flew over the chicken’s nest.  Layer Cake. Cluck back in anger.