You are here: Home / Recipes / Gluten-free / Curried chicken salad – a cool salad for a hot night 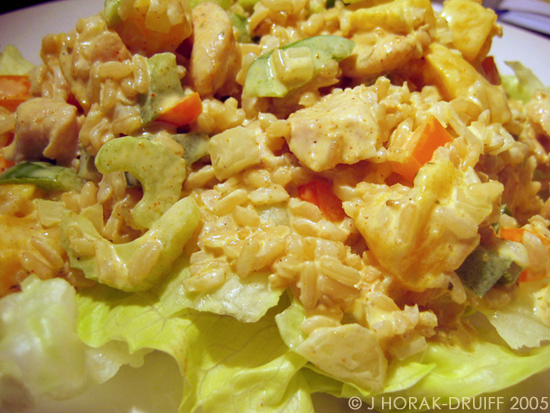 Well, summer has finally arrived here in London – with bang.  At the beginning of last week I was still carrying a jersey and a jacket to work with me and moaning about how it’s still chilly although it’s the middle of bloody June.  And then Friday… BAM!  Summer finally hit these shores!  It was somewhere in the region of 30C and it hasn’t really dipped mych since then.  Everybody is asking me whether I’m happy now that the weather is so hot, and don’t get me wrong, I am deeply grateful for the sun, the warm breezes and the delicious summer evenings.  But it isn’t the same as home.  For a start, it is ridiculously humid, without the cooling summer breezes of my home town.  And for another thing, the houses here aren’t designed to lose heat but to retain it – so when you walk into your house after a day at the office, it’s like a sauna!  And of course, the heat is concentrated upstairs in our west-facing bedroom…  Let’s just say sleeping is difficult!!

Obviously, there is no way that I’m going to be cooking big hot meals in this weather.  Being trapped in our poorly-ventilated little kitchen with a boiling pot for an hour sounds like hell on earth.  And besides, who wants to eat hot food when the sweat is already pouring off you?  So while walking home from the station last night I was mentally going through the contents of our fridge to see what our cool options for supper were.  I did consider a Caesar salad, but thought that Nick might need some more sustenance (he is training for a regatta and needs his carbs!).  I could do salade Nicoise… but then I ALWAYS end up doing that when it’s hot.   Then I remembered the can of peach slices in the back of the grocery cupboard, bought for some dessert that was never made.  Hmmm, now what goes with peach slices?  Well, if you grew up in my mom’s house, it was curried chicken salad.  In fact, I think everybody’s mom had their own recipe when I was growing up – some added peas, some didn’t.  Some preferred a bed of lettuce, some didn’t.  Some opted for apricots instead of peaches.  Either way, it was a stalwart of our summer menus.

WHat I didn’t know when I was growing up was that the whole ensemble is based closely on Coronation Chicken, a dish created by Constance Spry in 1953 for the foreign guests who were to be entertained after Queen ELizabeth II’s coronation.  The food had to be prepared in advance, and Ms Spry proposed a recipe of cold chicken in a curry cream sauce with a well-seasoned dressed salad of rice, green peas and mixed herbs.  Constance Spry’s recipe won the approval of the Minister of Works and has since been known as Coronation Chicken.  For those of you who are interested, here is a recipe for the Real Thing.

For those of you who are more interested in the Cooksister version pictured above (considerably simpler to make and heavier on the vegetable ingredients…), here’s what I used:

And if you are once again marvelling at my lack of posts, the answer is that I’m too busy living the culinary good life to have time to blog (I’ve always wanted to say that…!).  Have a look at the pic below and guess where I was last weekend… 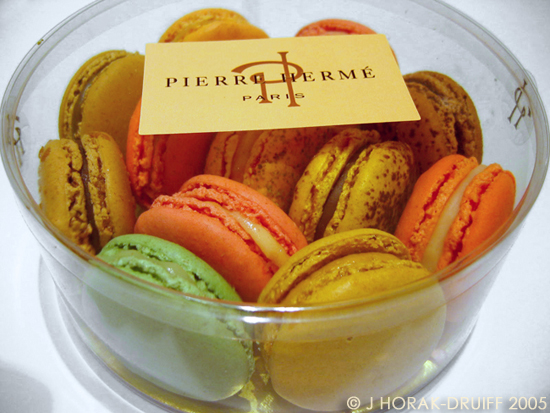