You are here: Home / Wine & beer / Australian Shiraz for WBW#3 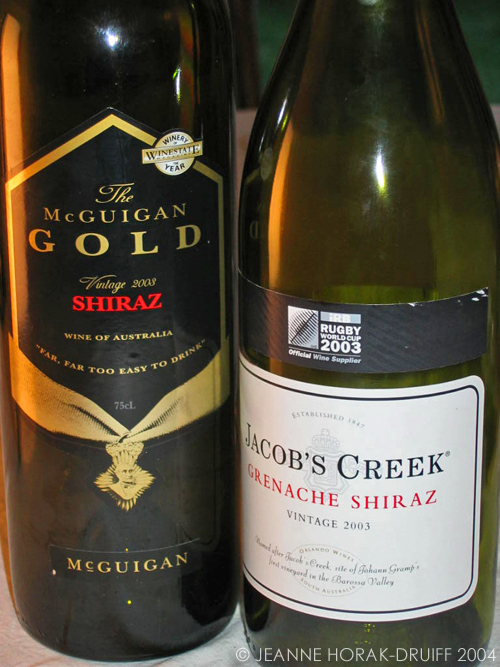 I was pretty excited about Viv from Seattle Bon Vivant’s choice of Australian Shiraz as the theme. Coming from a New World wine-producing country myself, I find Aussie reds very accessible and very much suited to my palate. Because of their worldwide popularity, there is an abundance of Australian wines on the shelves here in London, so it didn’t look as if it would be too difficult to find something nice to drink for this month’s event. As I have mentioned, on the day of the terrine edition of Is My Blog Burning I was having a little lunch party and was planning to wow everyone with the terrine before launching into a nice wintry main course. Having decided that said main course would be beef in Guinness stew, it dawned on me that this was a dish that might play very nicely with Aussie Shiraz… so I told the guests each to bring at least one bottle of Aussie Shiraz and planned for a little impromptu horizontal tasting. So far so good. I went shopping for my Shiraz and found that it is quite hard to steer clear of the Hardy’s and Jacob’s Creek wine behemoths and try to find something a little more off the beaten track. What I really wanted to try was the Penfolds Shiraz – I think it was one named after a Bin number, but can’t quite recall the name now. In any event, it cost £40, so I didn’t think that was justifiable!! In the end I settled for a Shiraz from the McGuigan vineyards.

But before we uncork/unscrew anything, a few words on Shiraz. There is some dispute as to the origins of Shiraz – some say it originated in Persia (modern day Iran) from near the city of Shiraz and was from there brought to France where it is still planted as Syrah, but tests on French Syrah grapes show no evidence of this theory and confirm that Syrah originated from two ordinary French grapes, Mondeuse Blanche and Dureza, both from the Northern Rhône region. But the tenuous connection between the Iranian city and the grape lives on, if only in name, in Australia and South Africa where it is called Shiraz as opposed to the French and American Syrah – but it is one and the same grape. Shiraz is a very vigorous growing grape. It produces large bunches of anywhere up to 130 berries per bunch. They are long and loose bunches with very good disease resistance. Shiraz does very well in a cool climate and thrives in warm spring weather to produce a strikingly peppery wine. Here is some more info on Shiraz if you are interested.

OK, so we were all set for a nice Shiraz tasting last Sunday. Plans started to come undone when two of our guests called at the last minute to cancel because of illness. Not a problem – there was still another guest coming, and of course I had a bottle of Shiraz. But when said guest arrived, she had brought a Grenache-Shiraz blend as opposed to a 100% Shiraz – so after all my planning we were left with exactly one bottle of Shiraz! Anyway, undeterred, we opened and tasted both before pronouncing them sound and finishing them off 😉 For those of you who are interested, here are my tasting notes:

Colour: Very very deep garnet with purple edges. Almost opaque.
Nose: Almost exactly like port! If it had been a blind tasting I would have guessed port…
Palate: Quite a big wine but with fairly soft tannins. Ripe berry fruits on palate, very little spiciness. Medium bodied (more body than the McGuigan though!) and medium finish. Pleasant and uncomplicated.

In summary, I was disappointed with my wine. This is probably partly due to the fact that I really took pot luck when I bought it (no advance research – I just headed for the booze aisle in Tesco…) and partly because I was not willing to spend a lot of money! I was brought up on Shirazes that displayed all the peppery, spicy characteristics that one expects of the grapes, made with enough tannins to add complexity and structure. The McGuigan wine, however, was clearly made to enjoy now, which is fine, but it would have been nice to have SOME varietal characteristics showing… For your money, I thought the Jacob’s Creek was the better deal. It also illustrated why single cultivar wines are not always better – sometimes a wine positively cries out for some blending to add complexity, and this was the case here.

As my parting shot, I would like to share with you the little slogan printed on the McGuigan bottle: “Far, far too easy to drink”. I could not have said it better myself, sir!