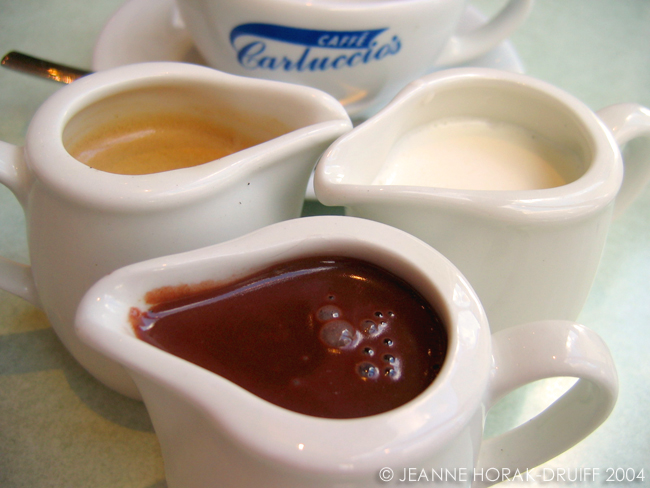 The sun sets at about 4 pm, my garden is dying, I am wearing my winter coat every day now and fantasising about new gloves… yep, it must be winter in London.  And coming from sunnier climes, I find this the most, erm, challenging time to live here.  The only things to get me through it are:

Mmmmmm, hot chocolate – my favourite sinful hot winter drink (well, that’s if we’re talking non alcoholic.  Gluhwein is also a pretty strong contender otherwise!!).  If I make it at home I use only Ghiradelli hot chocolate mix (currently, the chocolate mocha flavour) for which I make a special trip to Fortnum & Mason.  This is mainly because I don’t know where else stocks it, but it also has the side effect if making people terribly impressed when I tell them I buy (some!) groceries there.  I know, I need to get out more.

But I’m not writing this post to tell you about my shopping habits – I wanted to share with you two of the most heavenly chocolate drinks that I have recently discovered.  I have tried hot chocolate in a variety of places, from 5 star hotels to greasy spoons to fast-food caravans on public squares (note to self – never again!) and like to think I have become somewhat of a connoisseur in this department.  More often than not, I am disappointed by hot chocolate served to me in restaurants, so this increases my great pleasure in telling you about these two little gems.

A month or so ago, I met up with a friend for breakfast at Carluccio’s in Canary Wharf.  I love Carluccio’s as it lets me combine shopping for Italian delicacies with eating out – they have a deli section where you can get everything from Italian ham to exotic pasta to Vin Santo. But we were there to eat, not to shop, so we settled in at our table to look at the menu.  There is a lot to tempt you – I particularly liked the look of the scrambled egg topped with crispy pancetta, but in the end we were more conservative – I had a chocolate croissant and my friend had muesli with yoghurt and honey.  Where we did go to town, though, was the drink.  On the menu was something I had never seen before called bicerin. 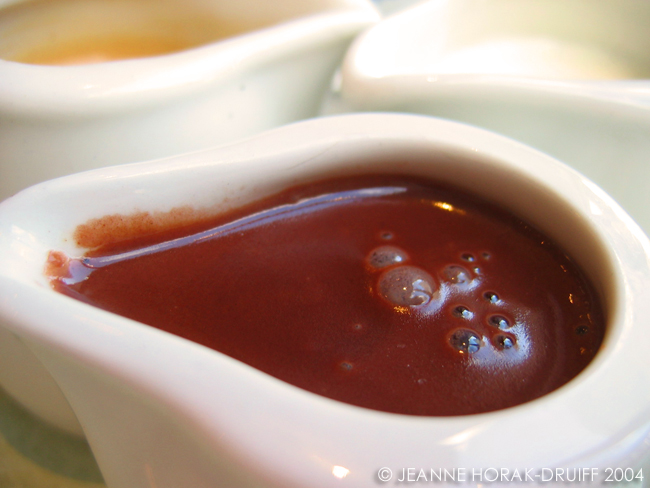 This is a drink which originated in Piedmont in the 19th century and is named after the small glass (or bicchierino) in which it was traditionally served.  Its main ingredients are coffee and (you guessed it) chocolate, which was already enough to attract my attention, but the way in which Carluccio’s serves it made me fall head over heels in love.  You are presented with a little tray containing an empty coffee cup and three little jugs.  In the first is freshly brewed espresso.  In the second is fresh cream.  And in the third is chocolate – of the consistency you would normally pour over ice cream!  You then have the task of composing your own combination of these ingredients to your specifications in the empty cup.  More chocolate for the sweet lovers, more espresso for the caffeine addicts and loads of cream for the cholesterol cravers.  The taste was just heavenly – very rich and decadent, thanks to the chocolate and the cream, but at the same time with the dark, smoky espresso saving it from being overpoweringly sweet.  I just wanted it to last forever!  The only way of improving it for me would be to provide a little food burner so you could keep the three jugs warm as you contemplate the composition of your second cup…  But that’s a minor complaint.  Do yourselves a favour and before the end of winter, make sure you track down a cafe that sells this nectar!

The other happy discovery was made yesterday when I visited the Tate Modern gallery on the South Bank with my friend Bronwyn.  She had free tickets to the Members’ room, so after our stroll around the Turbine Hall to see the new exhibit, Raw Materials by Bruce Nauman (a fascinating “aural collage” making full use of the amazing dimensions of the Turbine Hall) and a quick tour of the Landscape/Matter/Environment and  Still Life/Object/Real Life displays, we headed for the Members’ Room on the 6th floor.  It’s a lovely space with windows on both sides – one side offers a panoramic view over the Thames and the other side offers a sunny roof terrace where people were relaxing with their Sunday papers.  We got a table by the view and ordered hot chocolate.  The cups seemed disappointingly small but oh boy, the chocolate was delicious!  Tasted as if it had been made with proper melted chocolate and hot milk, not hot water and some flavoured sugar like many other places.  And the price for this heavenly little cup with a view of the Thames and St Paul’s?  £1.80 – a bargain!  For this chocolate and the use of the lovely Members’ Room I would gladly pay the £49 per year membership fee.  Gift ideas for Cooksister…!

So this winter I will have two new places to go when the weather is getting me down, and I know that my hit of hot chocolate will cheer me up on even the gloomiest of London winter days.  What more could I ask for?