You are here: Home / In my pantry / Paris food souvenirs 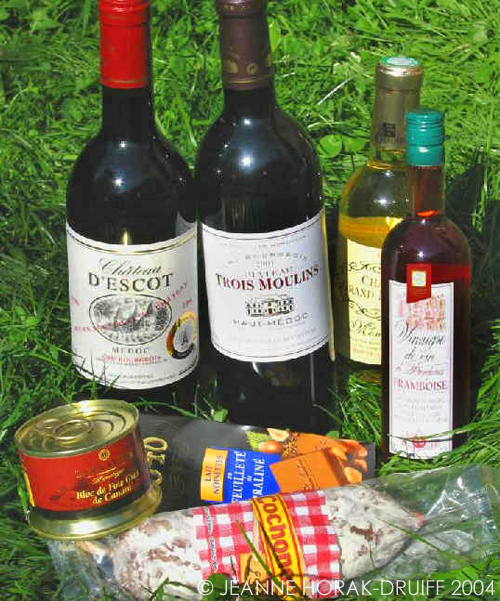 As you will know from previous posts, Nick and I recently went to Paris for a long weekend. Now one of our favourite things to do when we travel is to trawl the food stores of wherever we happen to be, and we are always amazed at the variation between what’s on the London shelves and on the Continental shelves. In London, grocery shopping is just another chore, but in a foreign land it becomes a wild adventure of hedonistic pleasure. This visit in particular, I was mesmerised by the pork rillettes and duck fat and all the things that are considered (and priced as!!) speciality items in London, but freely available on the shelves of a nondescript suburban supermarche in Paris.

So given our fascination with foreign grocery stores, it’s hardly surprising that we invariably come back with food – in fact, this time we took an extra bag especially to carry home our moveable feast! What did we get? Well, as you see from the picture, there was a definite tendency towards things in bottles, which is a really, erm, interesting choice when you consider the fact that we had to haul them home on our backs… but then I’m convinced you enjoy the delicacies all the more if you had to struggle to get them home! 😉

From the back, then, we have:

So that’s it – our little hoard of delicacies (already depleted as the chocolate and saucisson are now only a fond memory…). But never fear – tomorrow morning I am off for a week in the south of France! Lots to see, do, eat and drink. And of course a whole lot of food shopping to do!