It’s that time of the month again – the time when I spend a week agonising over recipes, talking to friends and generally wracking my brains for suitable dishes. Am I talking about lunch with crotchety relatives? No – it’s time for Is My Blog Burning?, the worldwide food blogging event dreamed up by Alberto of Il Forno. For those of you who don’t yet know, IMBB now also has its very own home page – check it out for info on past, present and future events!

This time round it was the turn of Derrick from An Obsession With Food to host and as a theme he selected Layers and Layers, aka terrines. As I mentioned when I first announced IMBB9 on this blog, I have never even considered making a terrine – and it appears this is not an uncommon response because Derrick helpfully included a terrine primer in his post! I do remember making rather a lot of cheat’s chicken liver pate (no actual cooking involved, apart from frying the chicken livers & onions a bit!) and I do a mean cheat’s smoked mackerel pate, but that’s about as close as I get. So you could say that this was my most challenging IMBB to date! Unfamiliar terrain so to speak. I did a bit of research and found out that:

As always, my first choice was to make something with a South African slant, but sadly, terrines are not the traditional food of my people as far as I can tell! I could probably have tried something experimental with biltong and blue cheese but a) I didn’t fancy my chances of getting affordable grated biltong in London (Harrods to sell it but we haven’t yet arranged that second mortgage on the house…) and b) I reckoned seeing as I had not even got to grips with basic terrine-making, experimentation was probably a little over-enthusiastic. So I abandoned that idea and decided to see what else was on offer.

I gathered recipes from the ‘net and from various friends and slowly a pattern began to emerge. My options were, roughly:

After reading all the terrine recipes in the Western World (or so it felt!!) I eventually decided to put together a composite recipe of what sounded nice to me. The decision was also partly informed by what was lurking in my fridge… I had sun-dried tomatoes and roasted red peppers in brine left over from a week or 2 ago and I am always in the mood for cheese, so I thought what the heck, how hard can this be – what I came up with was a soft cheese and Mediterranean vegetable terrine. I must add that while I was preparing to make this, our good friend John (visiting for the weekend from Jersey) was busy alongside me in the kitchen, demonstrating his frankly impressive fresh pesto-making skills! So while I was putting together my terrine my nose was being assailed by the delicious smell of garlic and fresh basil – heaven!! 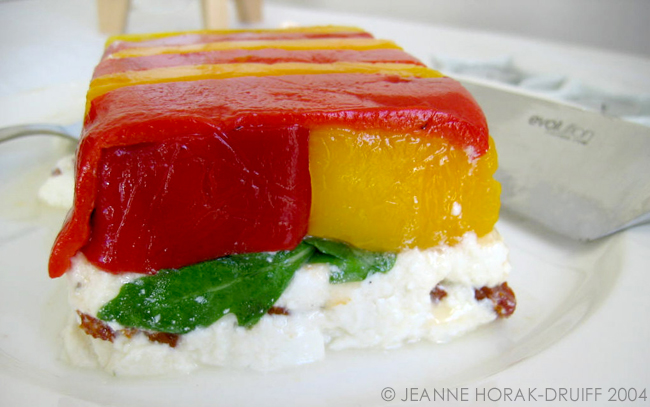 As I said, this was virgin territory to me. I had quite a lot of fun layering all the layers, wrapping the terrine and putting him to bed in the fridge. I was somewhat more tense at lunchtime when it came to unmoulding… but my terrine behaved beautifully! It unmoulded without a word of protest and looked quite amazingly beautiful. The only complaint I had came with the slicing. Due to the lack of binding ingredients (aspic, custard etc.), the terrine’s cohesive abilities were somewhat limited – in particular, the layer of rocket leaves was probably a mistake. A single layer would probably have been OK, but multiple leaves on top of each other simply had nothing to hold them together and so the two halves of the terrine separated on slicing. So I’m afraid, no pics of the sliced product!! If I make it again I would go for multiple single layers of leaves, separated by cheese mix rather than one thick layer of leaves. I might also pop the terrine in the freezer for half an hour before serving to firm up for the challenge of slicing.

And the taste? John had been concerned that it was going to be incredibly rich – but it was surprisingly light and delicious! The tartness of the pickled peppers, the sweetness of the home-roasted peppers, the creaminess of the cheese, the crunch of the leaves, the nuggets of tomato… a perfect marriage! I would definitely recommend this as a starter, with maybe some of the adjustments mentioned to improve aesthetics at slicing!!

So – terrine terrain conquered (largely!!). What will the next challenge be?

NOTES:
* I used the different cheeses to get the mildness of the ricotta and the flavour of the others in equal measures. If you wanted to be picky, you could use just ricotta and flavour it as you like, or use plain Philly/Boursin and flavour as you like. I was just saving time!
* I used half peppers in brine and made sure to dry them on paper towels before using them – didn’t want to terrine to be waterlogged.
* I also used sun-dried tomatoes in oil which I rinsed under warm water and dried on paper towels before using – same reason as above.

1. If (unlike me) all the peppers you are using are raw, roast the peppers – I only had to roast the yellow one. Halve and seed the peppers and place skin-side up under a hot grill until the skin begins to blacken and bubble. Remove them as soon as this starts and place them in a sealed plastic bag to cool and sweat. When they have cooled completely, you can pull the skin off easily. Cut into strips about half an inch wide and put to one side. Cut the sundried tomato pieces into bite-sized chunks or strips and put aside.

3. In the base of the tin and running up the sides as far as you wish, lay the strips of red and yellow peppers, alternating colours. In a separate bowl, mix 2/3 of a tub of ricotta, 1/3 of the Boursin and 1/3 of the Philly. When smooth, spread this mixture carefully over the peppers without dislodging them.

5. On top of the cheese layer, place a layer of sun-dried tomato strips. Then make a final batch of the cheese mixture and spread it on top.

6. Fold the clingfilm over the cheese mixture and press down on it lightly and evenly so that the layers are slightly compressed.

8. Slice and serve on green salad.