You are here: Home / Recipes / Roasted Brussels sprouts with sesame and ginger 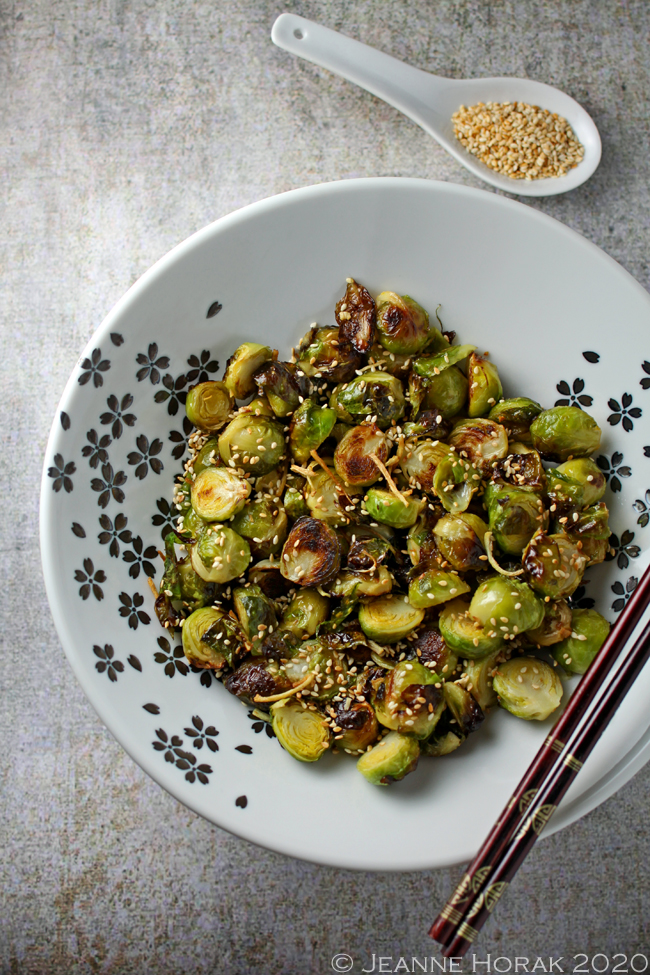 Jump to Recipe Print Recipe
Synonyms. Antonyms. Possibly even homonyms. It’s fair to say most readers will be able to hazard a pretty accurate definition for each of these.  But how about eponyms? Would it help if I told you that your Achilles tendon is an example of an eponym, and so is Fahrenheit?

If you guessed that an eponym is something named after somebody/somewhere/something else, you get a gold star! And when you start digging a bit, the food world is littered with eponymous foods or dishes – but some are more obscure than others.  Fairly obvious examples include Sriracha sauce (named after the city of Si Racha in the Chonburi province of Thailand); padrón peppers (named after the town of Padrón in Galicia, Spain); or Tabasco sauce (named after the Mexican state of Tabasco).  Others are more obscure: satsumas take their name from the historical name of the modern Kagoshima Prefecture in Kyushu Japan; damsons (or archaically, Damascene plums) are named after the city of Damascus, Syria; and quince is the sole member of the Cydonia botanical genus, named for the ancient city-state of Kydonia, Crete. Then there are the inexplicable – nobody really knows why we call them Swiss chard or Swiss rolls.  And I wonder how many of you know the Dorset knob (rusk-like crumbly savoury breadrolls) or the Manchester tart (a raspberry & custard tart with coconut & maraschino cherries).  What did you think I meant…? 😉 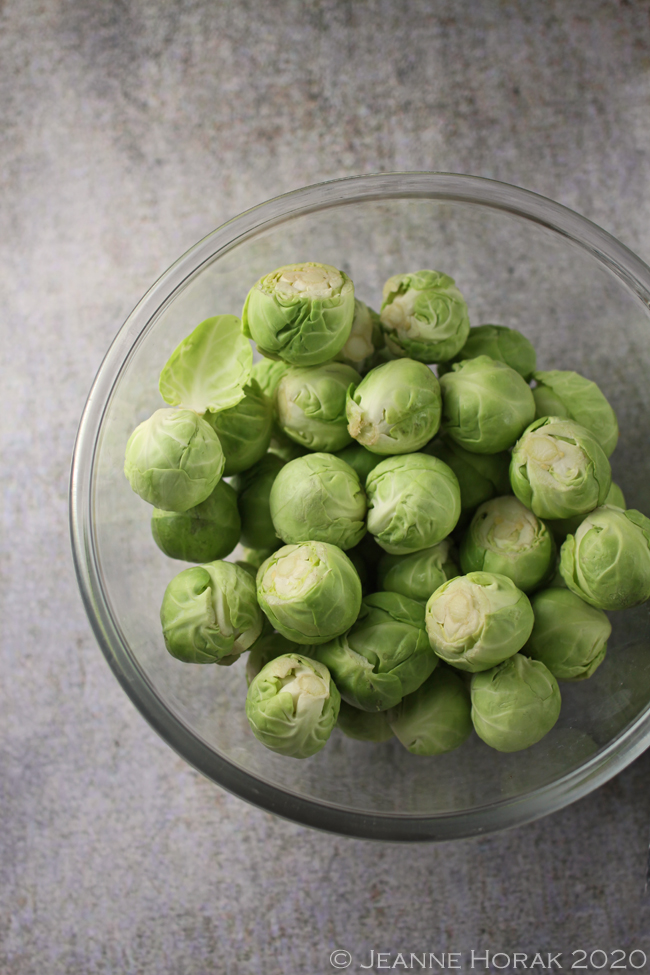 Eponymous Brussels sprouts are pretty obviously named after the Belgian capital of Brussels, which is why they are correctly called Brussels sprouts, not “Brussel” sprouts, even when only referring to one sprout. They didn’t originate there though – early forerunners of these little bonsai cabbages are thought to have been cultivated in ancient Rome.  But by the 13th century it is thought that Brussels sprouts were being cultivated in Belgium and the Netherlands.  The first written references to them appear in the late 1500s and from the Low Countries their popularity spread throughout the rest of northern Europe where their growing characteristics make them particularly well-suited to the climate. Brussels sprouts grow in temperature ranges of 7–24°C but they produce highest yields at 15–18°C. Harvest season in the northern hemisphere is September to March, making Brussels sprouts an ideal and very forgiving winter crop when not much other greenery is flourishing. It also makes no difference if harvest is delayed – quality does not suffer and in fact, sprouts are considered to be sweeter if harvested after a frost. 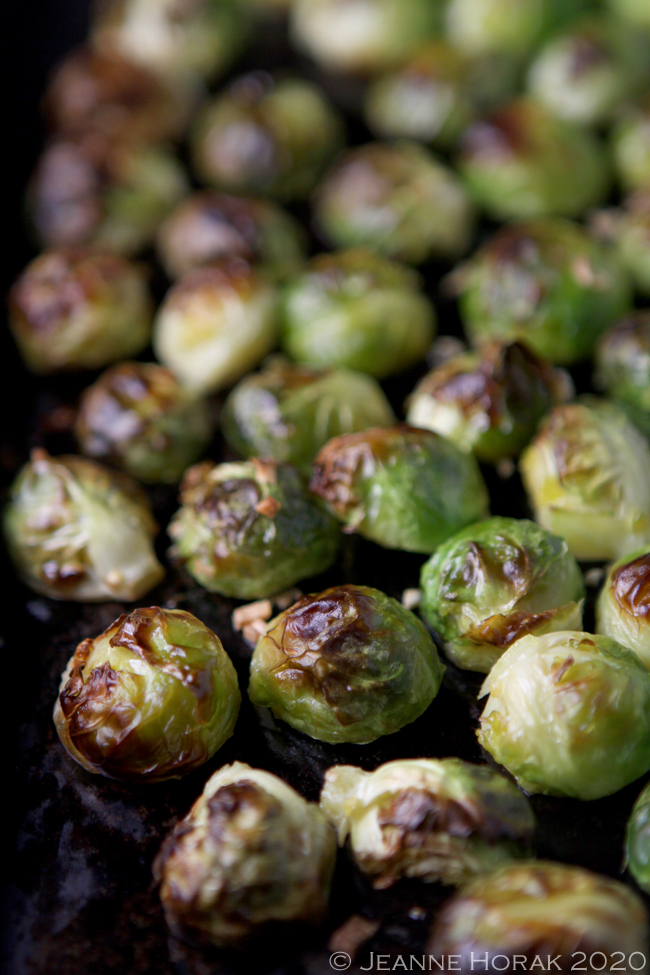 Brussels sprouts belong to the same species and family (the Brassicas) as broccoli, cabbage, kohlrabi, cauliflower and kale, are low-calorie, high-fibre and are packed with nutrients. Sprouts contain high levels of vitamins A, C and K; folic acid and dietary fibre – an 80g serving of Brussels sprouts contains four times more vitamin C than an orange, and a cup of cooked Brussels sprouts contains only about 60 calories. And despite it being a time-honoured British tradition to  bemoan the presence of Brussels sprouts on the Christmas menu, Britain consumes more sprouts than any other European country per year: around 40,000 tons, which is is almost the weight of the Titanic! The bitterness that some people taste in Brussels sprouts (and the root of much of their bad reputation) comes from the presence of chemical compounds called glucosinolates, which occur naturally in Brussels sprouts and which break down into (amongst other things) sulforaphane.  But sulforaphane in lab tests has been shown to reduce the size and growth of cancer cells; reduce inflammation that causes heart disease; and lower blood sugar. And the good news is that if you don’t overcook sprouts (so long, tired, grey, stinky boiled sprouts), the bitterness is reduced so stick to faster cooking methods like sautéed Brussels sprouts or roasted Brussels sprouts, my new favourite way to cook a big batch of sprouts.

This recipe for Asian-inspired sesame and ginger Brussels sprouts was adapted from a recipe that I saw in Tesco magazine and it is the antithesis of the boring, bitter boiled Brussels sprouts of your youth.  Roasting gives the sprouts a sweet caramelised nuttiness which is enhanced by the toasted sesame, while the fresh ginger balances the nuttiness with a bit of zing. It’s low in fat and calories but high in fibre and deliciousness – and even though we’ve fallen out of love with the politics of Brussels, this recipe will ensure that we’ll always love their sprouts! 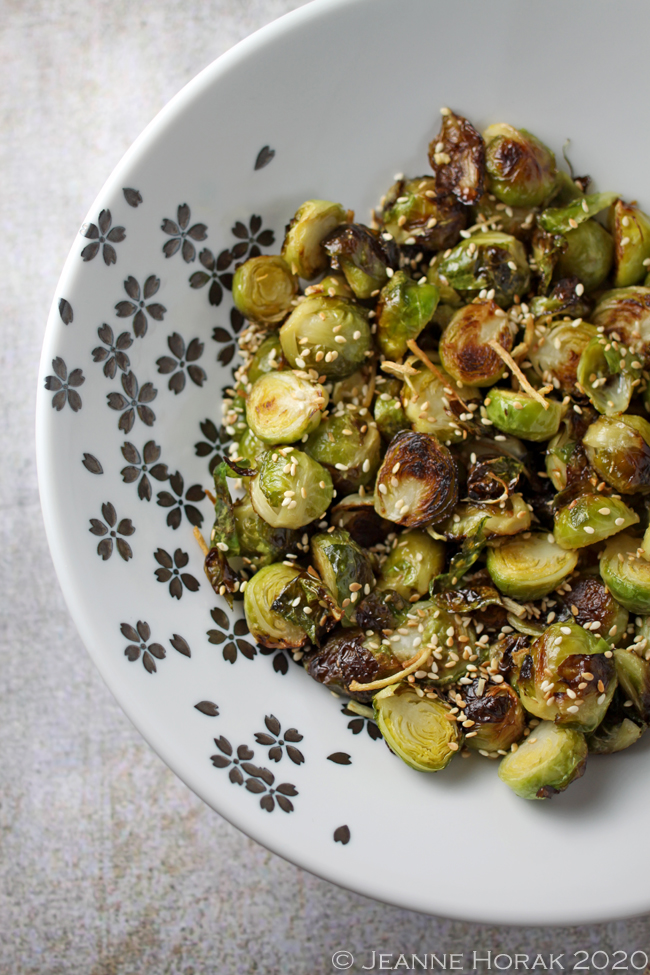 If you love this recipe, why not try…

This super-simple Asian-inspired recipe for roasted Brussels sprouts with sesame and ginger will convert even the most ardent sprout-hater!

Pin the recipe for later! 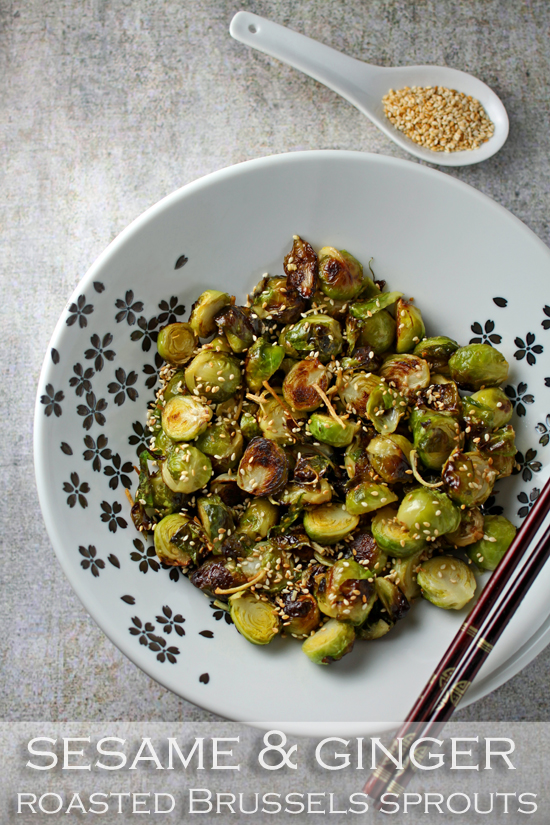