You are here: Home / Restaurants / London restaurants / Pret a Diner (Italians do it Better) 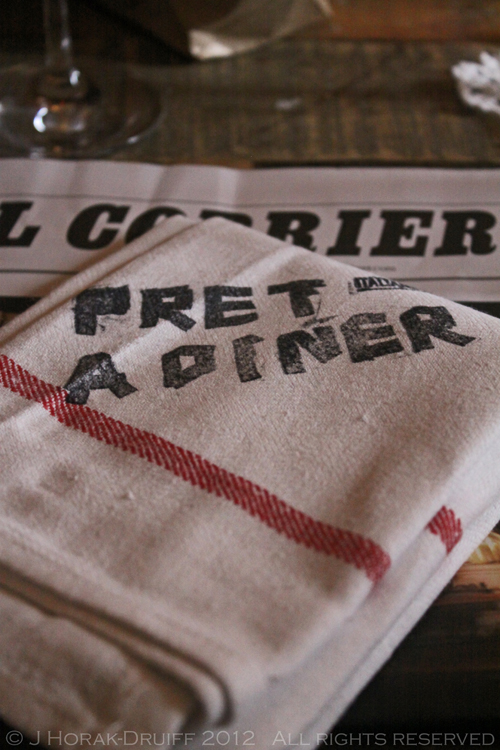 “This is not a pop-up restaurant – this is a real Italian Dining experience” read the blurb on the Pret A Diner website. Having already had what I consider to be a quintessential Italian dining experience, involving long tables on a village square in Zibello; plates of freshly made pasta;much laughter and banter over the prosciutto slicers; and a loquatious nonna in the background making sweet pasta fritters with a hankey tied around her head, I was intrigued to see how Pret a Diner might approximate this in a historic central London building.  Pret a Diner is the brainchild of Olivia Steele and offbeat chefs Kofler and Kompanie, and they have previously created pop-up restaurants dining experiences in Munich, Berlin, Frankfurt, and right here in London last summer. This summer’s London incarnation of the concept, Italians do it Better, comprised a 52-day opening in the faded grandeur of 50 St James, a Grade II Listed building just off Piccadilly and round the corner from Prince Charles’ digs.  Italian chefs chosen by Giorgio Locatelli and with an impressive 10 Michelin stars between them would be in the kitchen and the idea was to fuse innovative Italian food with cutting edge art and music – or to “satisfy all the senses” in the organisers’ own words.

Entering the building is a somewhat surreal experience.  The shell of the building dates back to 1827 and has been home to a luxurious gaming house frequented by the Duke of Wellington, as well as home to the Devonshire club.  But when Pret A Diner came to town, they brought a small army of carpenters and craftsmen and built what can only be described as an interior within an interior.   The ambience in the lobby is pure Baz Luhrman’s Romeo & Juliet, with candles, sweeping staircases and Vittorio Orsini’s glowing red neon cross at the top of the stairs.  To the left is a gallery featuring art installations from Monica Bonvincini and Giovanni Ozzola, and to the right, a bar operated by 69 Colebrooke Row.  Ascend the stars and you arrive in the dining rooms, one of which is situated in a “basketball court” where the hoop is dripping with jewels and neon slogans wink at you from behing the chainlink fence.  Long tables come complete with outsized floral arrangements, rustic brown paper menus and hand-crocheted doillies as coasters. In our room, large photographic prints of movie stars incluiding Jack Nicholson, Angelina Jolie and Madonna gaze serenely down on us as we settle into out Philippe Starck “Louis Ghost” perspex chairs. The attention to detail is pretty phenomenal. Bread soon arrives in paper bags printed with the Pret a Diner logo and as we sip prosecco, the chefs for our visit (the charming and clearly passionate Costardi brothers, Christian and Manuel) arrive to explain the concept of their menu to us (traditional foods from their childhood, given a modern twist). First up is an amuse bouche of a raw beef crostini, topped with shaved Parmesan.  This is a delightful take on the ingredients of a traditional beef carpaccio – delicate, packed with flavour and delicious. This is rapidly followed by our first course of asparagus, celery and scallops – a beautiful presentation of pale, buttery scallops nicely offset by the crunch of celery ribbons, the freshness of seasonal asparagus, and an unusual tang of… liquorice!  Not a combination I would ever have suggested, but here it worked really well. The next course was the one that the Costardi brothers had seemed most passionate about.  They described it as a nursery food that was incredibly common where they grew up, but apparently largely unknown elsewhere – tomato risotto with basil. It certainly isn’t something I had ever thought to make, a sentiment echoed around our dining party. But two mouthfuls in and we were all wondering why we had not made this before as it is deceptively simple yet addictively delicious. The carnaroli rice was perfectly al dente yet coated in the creamiest of smooth tomato sauces, topped with a chunk of blanched tomato and a swirl of rich homemade basil pesto.  It was so simple, yet so effective, and spoke of truly good ingredients.  This was followed (rather rapidly, once again) by the meat course consisting of slow-cooked veal cheeks with creamed potato. Veal cheeks are, to my mind, a tremendously underrated dish and perfect for those who find most veal to be insipid.  There is nothing inspid about these butch, gelatinous chunks of meat, cooked to fork-tender consistency.  Alongside them came the creamiest potato that I have had since I dined at L’Atelier Joel Robouchon – another perfectly simple dish, elevated to greatness by spot-on cooking techniques. Dessert was described as a peach tribute to Nonna Sandra and consisted of a sort of peach custard, topped with crumbled amaretti and a spiral of excellent dark chocolate.  This was unusual yet comforting, and again not something that you will see on most menus.  I also liked thet fact that it was not too sweet, and that the scuptural chocolate garnish was made from really good quality chocolate, and was not just a visual afterthought. After dinner (which, to my astonishment, took 90 minutes or less), I decamped to the bar downstairs, packed with the trendy young things du jour and awash with witty retro jackets, vertiginous platform sandals, outsized designer handbags, and air-kisses, sweetie-daaaahling. I felt a little like I was on a Richard Attenborough film set, where he was fliming some rare and alien species in their natural jungle environment – an impression added to by one lush, ivy-coated wall in which glowed a neon sign that read “Let’s go get lost.”  Indeed.  After a couple of very fine cocktails I headed out into the twilight, standing on the Mayfair pavement blinking as if in surprise to find that the real world had been just outside the front door all along, like Alice emerging back out of the rabbit hole. And the verdict?  Tough question.  First, the good stuff.  The Costardi brothers and door staff were super-nice and smiley and not at all pretentious, keen to explain the concept and not batting an eyelid at my terminal uncoolness (!). The building itself is sumptuous, with the art and decor providing a constant stream of visual stimulation. Clearly a lot of thought has gone into creating and executing the concept and attention to detail is pretty high. I also really enjoyed all the food – the ingredients were good, the combinations interesting, and the platings attractive.  So then why did I leave feeling so curiously unsatisfied? Firstly, we seemed to be rushed in and out with haste bordering on the indecent. I do not know whether this was because I was at a table of journalists, not paying for our places, or because they enforce that hateful 2-hour table-turning policy so common in London – but the meal seemed to be over before we knew it.  Secondly, for organisers whose stated intention is to democratise the world of Michelin-starred fine dining, pricing the menu at £75 for three courses and another £9 on top of that for dessert seems to be an odd way of going about this. And although I had eaten more than enough, if my husband and his healthy appetite had come along, he would have left still hungry – and after blowing £80 on a meal, that is not ideal. To put it in perspective, you can dine at most Michelin-starred restaurants for less – so I am not sure how the democratisation is actually working. Sure, you serve your bread in a paper bag rather than with silver tongs, but at that price I’ll take the tongs, please! Lastly, places that try quite this hard to be cool, cutting edge and trendy provoke bouts of giggles in me, rather than mountains of admiration.  But judging by the trendy crowd in the bar, I am guessing that this is not a universally held opinion 😉  Would I go again?  Probably not.  But if you are tired of same-old same-old fine dining and like your Michelin-starred dining with a bit of sideshow, make sure you catch Pret A Diner at some point on its world tour.

Liked: the food, the door staff, the eclectic decor
Disliked:  the prices, the over-speedy service
On a scale of 1 to 10:  6 out of 10

DISCLOSURE:  I enjoyed this meal as a guest of Pret a Diner Don’t forget – I am hosting Meeta’s Monthly Mingle this month and the theme isA Taste of Yellow to honour our friend and ellow-blogger Barbara Harris of Winos and Foodies who passed away last month after finally losing a long battle with cancer.  In honour of her annual Taste of Yellow event which raised cancer awareness, we have decided to paint the food blogs yellow with dishes in every shade of yellow, and we hope you can join us! Feel free also to share memories and pictures of Barbara in your post if you wish. You have until 6 August to get your entries in – click here for detalis of how to take part.