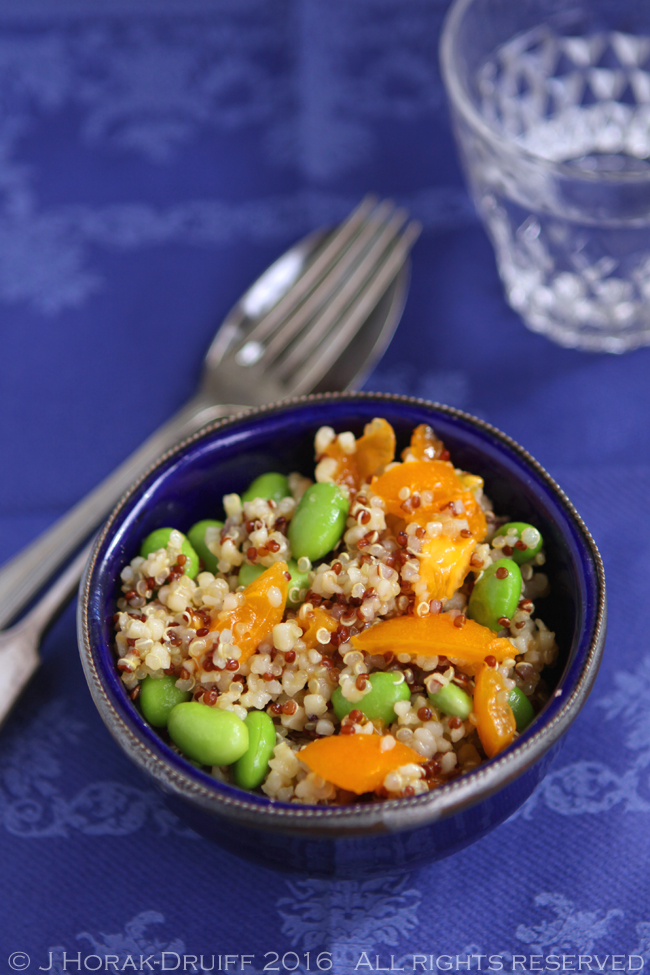 “The world can be divided into two kinds of people…” – it’s one of those sentences that we have all uttered at some point in our lives.  And although at first it seems like a rampant oversimplification, I find that it is uncannily accurate and I have over the years become an inveterate collector of ways in which the world can in fact be divided into two types of people.  Let’s see…

I have recently also added another division to my list:  people who prefer their food on a plate and people who prefer their food in a bowl. Of course, the reason why I noticed this is because of another immutable law of nature: if you are a toe-toucher, you will marry a non-toe-toucher and so forth.  Me, I am a plate person.  I think it probably stems from my early childhood when my mom used to make my brother and I the ’70s kiddie equivalent of a tapas meal: rolled up pieces of ham, cubes of cheese, chunks of apple, Hellmann’s mayonnaise and crackers all served in one of those retrotastic 1970s faux wood compartmentalised picnic plates. I am sure that this early compartmentalisation of food is what led to my penchant for keeping foods separate today – I like my sauce or dressing separate from my food and I always sprinkle salt in a little pile on the edge of the plate, dipping my food rather than dousing it. Nick, on the other hand, is a bowl person all the way.  If it can feasibly be served in a bowl, that’s exactly how he eats it: pastas, salads, curries – everything except a standard meat-potatoes-two-veg sort of meal.  My latent food OCD shudders slightly at the disorganisation of it all. 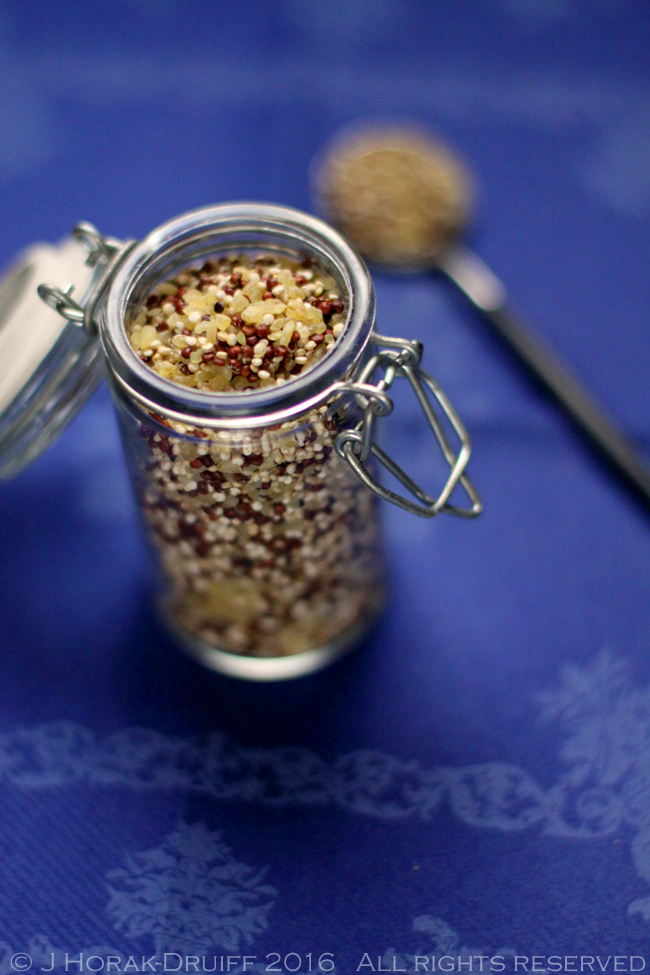 But just as they say owners start resembling their dogs, spouses over the years do start to adopt each other’s habits. Sadly I can’t say I have adopted Nick’s boundless enthusiasm for competitive sports; and happily I have managed to avoid his limitless capacity for old Westerns.  But on the food front he has gradually persuaded me to try hotter and hotter foods (bearing in mind that when I met him I found a korma a bit challenging); and I have to admit that every now and again, I see perfect sense in eating from a bowl rather than a plate. I hasten to add that I am not jumping on the smoothie bowl bandwagon anytime soon. It seems that the latest trend is to make an extra thick smoothie, bung it in a bowl, sprinkle with fruit, seeds & nuts and call it a breakfast bowl (a.k.a The Key To Instant Health).  No – for me bowlfood is more about comfort and convenience and requires rather specific foods.

I like my smoothie in a glass, thanks very much, and I like my steak on a plate.  But for some reason, anything carby or legume-y that I plan to consume on the sofa on a Friday night while catching up on Gogglebox just seems to taste better in a bowl. I’m thinking chickpea and chorizo stew; or a soupy green Thai chicken curry; asparagus & smoked salmon pasta; or even a spaghetti squash risotto. On cold nights, I totally get the joy of cradling a hot, sustaining bowl in your hands rather than balancing a plate on your knees, and so my slippery slide towards bowl meals began. Lately, there has been a massive rise in the popularity of the so-called Buddha bowl which is basically a healthy meal in a bowl: a grain, a legume, some vegetables and a dressing, all in one handy bowl. It’s a trend  much beloved by fans of superfood and it seems there is an unspoken competition to see just how many superfoods you can squeeze into one bowl. But for me, it’s more about the colours, the textures… and what’s in the fridge on a night when Nick is out and I want to whip up a quick bowl before snuggling up on the sofa! These quinoa bowls are my current go-to option.  I love the nutty combination of quinoa and bulgur; I love both the colours and the crunch of the vegetables; and I love that I can cook a big pot of quinoa and make variations of this for lunch all week. In these images I didn’t, but I often top it with a scoop of creamy hummus or sprinkle with some toasted sesame seeds – feel free to experiment!  Are you a bowl or a plate person, and have you tried Buddha bowls? 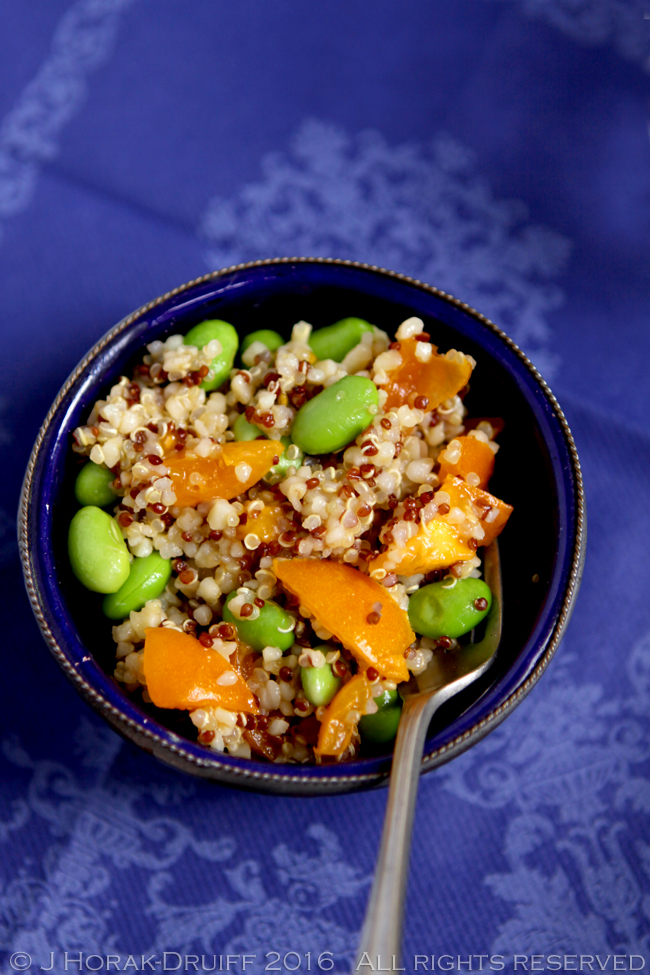 5.0 from 6 reviews
Quinoa & bulgur bowls with edamame and peppers 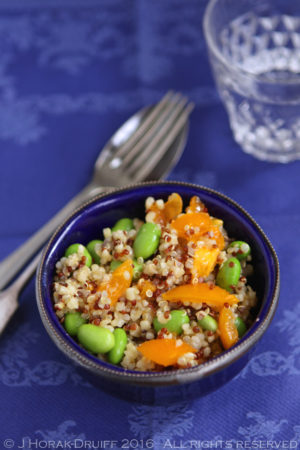 Print
Prep time
5 mins
Cook time
20 mins
Total time
25 mins
These quinoa & bulgur bowls with edamame and peppers are quick to whip up and packed with goodness and flavour. Make extra and have it for lunch the next day!
Author: Jeanne Horak-Druiff
Recipe type: Entree
Cuisine: Vegetarian
Serves: 4
Ingredients
Instructions
Notes
In the recipe above, the dish is served warm (not hot) but you can also chill the quinoa for a few hours after cooking and make this into a substantial cold salad.
Wordpress Recipe Plugin by EasyRecipe
3.5.3208

Love quinoa as much as I do?  Here are some more recipes from the web: