What do you think the following words have in common, other than the fact that they are all food items:

Give up yet? Apparently, according to surveys, they are among the top 20 words that diners struggle most to pronounce correctly, and the fear of mispronunciation means that people are hesitant to even attempt to order these items from a menu.  Some might say that it would take a brave man to name a restaurant after one of the foodstuffs on this list… but that’s exactly what Kurt Zdesar has done.

Kurt came to the UK from his native Australia at the age of 14 and credits an early stint at McDonalds with teaching him all about efficiency on the hospitality trade. After a very successful stint at a Canary Wharf hotel, he went on to found Nobu, arguably one of London’s most enduring restaurant success stories.  This was followed by more success – he not only launched Hakkasan with alan Yau in London but also the hugely successful Ping Pong chain which has done much to popularise dim sum in the capital.  In 2013 he founded Chotto Matte, a trendy restaurant serving Nikkei fusion cuisine designed to bring the energy of underground Tokyo to London. So given his history of founding Asian restaurants, Bouillabaisse comes as a surprise. The premise is that, together with chef Jordan Sclare (which whom he launched Chotto Matte), Kurt went on an extended working holiday around the coastlines of the world, collecting the best bits of coastal cuisine from everywhere he visited in order to create a menu that would remind diners of a carefree holiday. 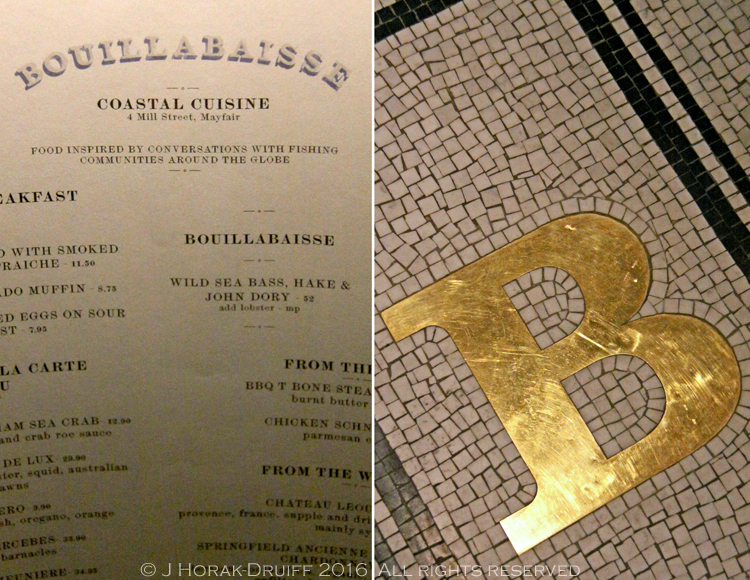 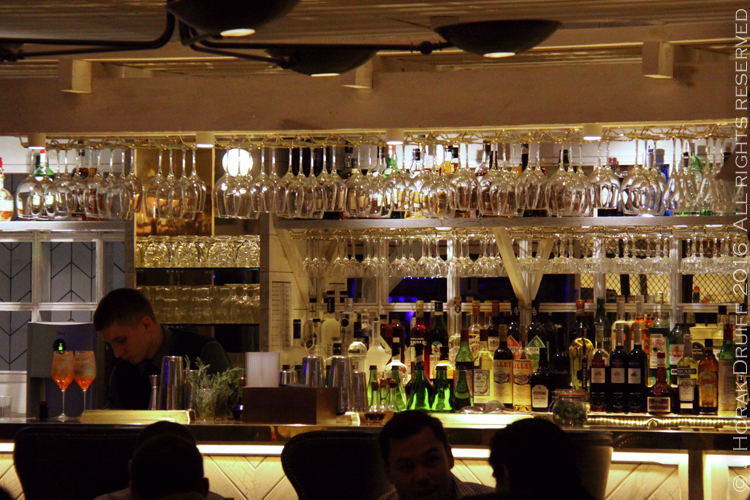 From the street, the restaurant is light and airy, with the name in a classic French bistro font on the front window above a display of sunbleached wood and seashells.  The simplicity continues inside with distressed wooden clapboard wall cladding, bare wooden tables and market specials on a retro diner-style changeable letter board.   Once seated, we were fortunate to have a chat with Jordan (himself an alumnus of Gordon Ramsay Royal Hospital Road and Nobu) who told us that the restaurant’s eponymous bouillabaisse took them months of research, development, reverse-engineering and tasting to perfect.  He feels that the restaurant’s concept is unique in focusing not on a country’s cuisine but drawing together the best recipes from a multitude of coastlines. He also introduced us to a tray of fresh crustacea – not on our menu tonight, but always available to customers wishing to splash out on a seafood platter.  For my money, I’d rather not meet my dinner before it arrives cooked on my plate, but if you’re into looking your dinner in the eye, you most certainly can at Bouillabaisse. 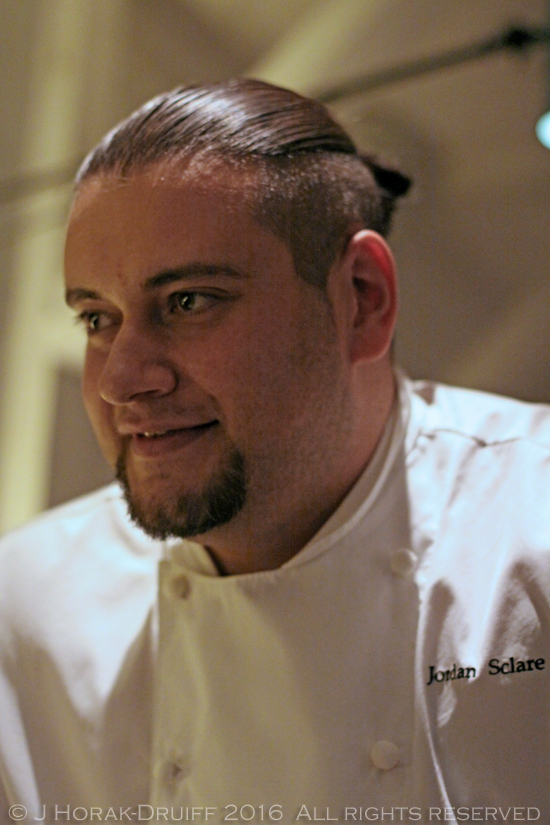 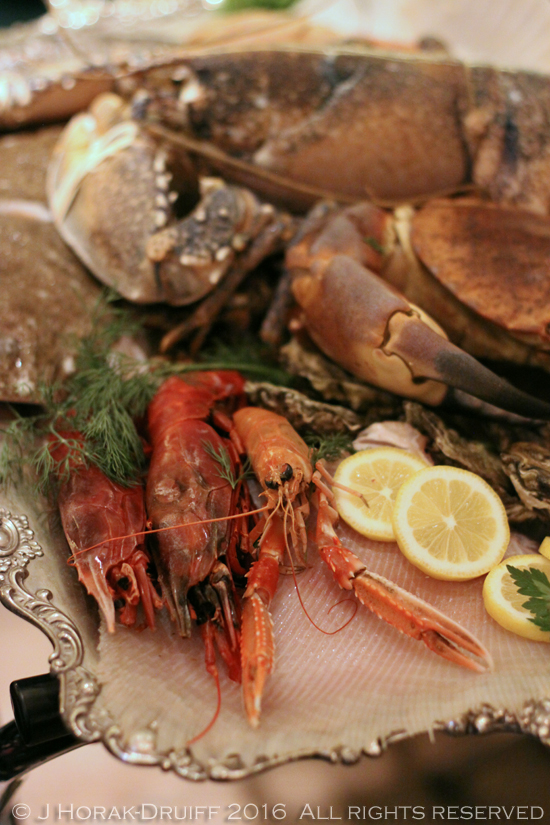 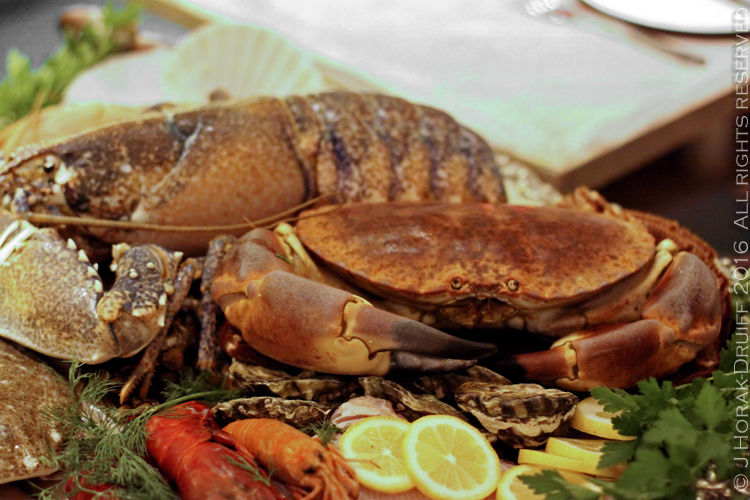 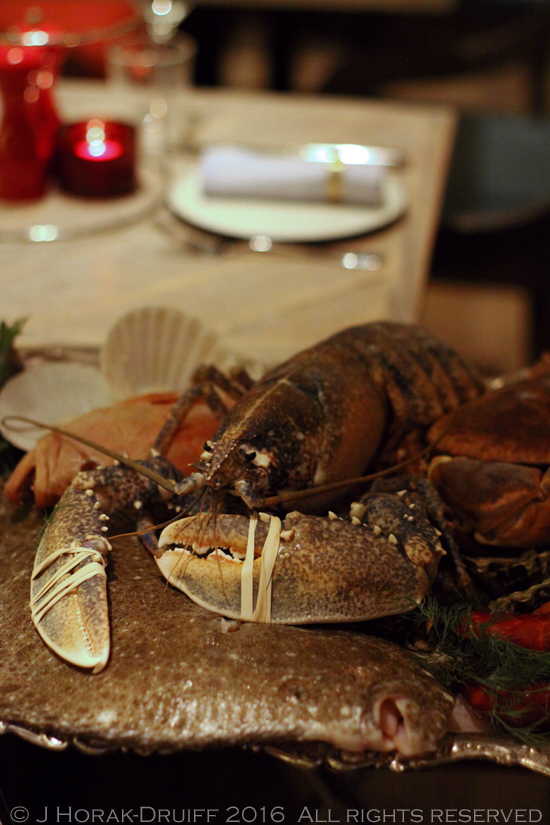 We started with a plate of crudites, warm flatbreads and excellent home-made hummus and anchovy dip, and the first of many glasses of the excellent SOuth African Hermanuspietersfontein rosé.  I was impressed to see that the wine list has a dedicated section for rosé and thatit comes first on the menu, rather than being tucked away as an afterthought. In a nod to holidays on the Cote d’Azur thee are an impressive 13 rosé wines to choose from! The rest of the wine list is ist divided into coastal whites, classic whites, coastal reds, classic reds and sparklers. Prices start in the late 20s but most wins are in the 40-60 price range, and the sparkling wines can be a lot more expensive. There is also a cocktail menu. 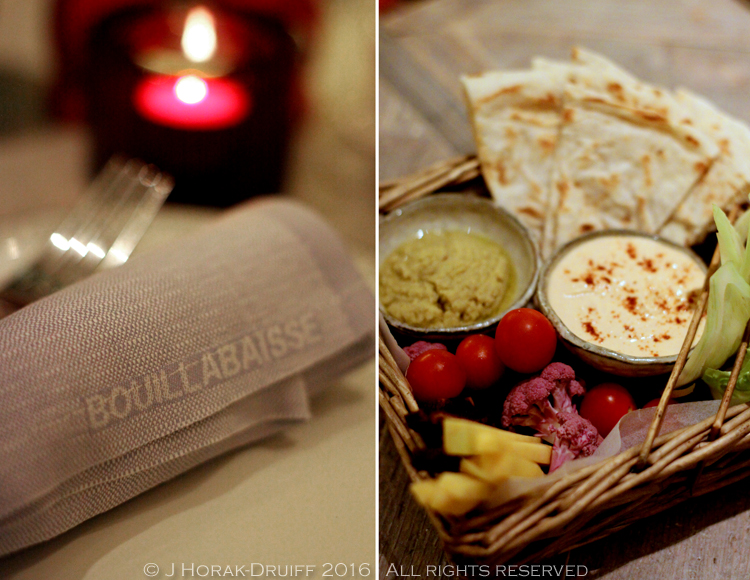 We tried two dishes from the starter menu, namely the wild sea bass carpaccio (£8.95) which was served scattered with basil and wild rocket, and spiked with piquillo peppers. This was excellent, both in terms of presentation and fresh flavour – I loved the interplay of the sweet slivers of fish and the spicy little pepper chunks. The other starter we tried was the lobster and prawn ravioli with basil and saffron (£14.95).  This was my favourite – little pasta pockets filled with and topped by tender chunks of sweet crustacean meat, bathed in melted butter, and given a golden glow by the addition of saffron. A truly outstanding dish. Although it’s not officially on the starter menu, it would have been churlish not to try the restaurant’s signature bouillabaisse, so we were each brought an individual serving, accompanied by the traditional rouille (a spicy mayonnaise), toasted french bread and grated Gruyere cheese. This was heaven in a bowl.  The soup itself was fragrant and rich with long hours of boiling the stock which forms its base, and generously laced with fish chunks. On the main course menu, it’s served as a sharing dish for £44.00 and you can add lobster for an additional supplement. 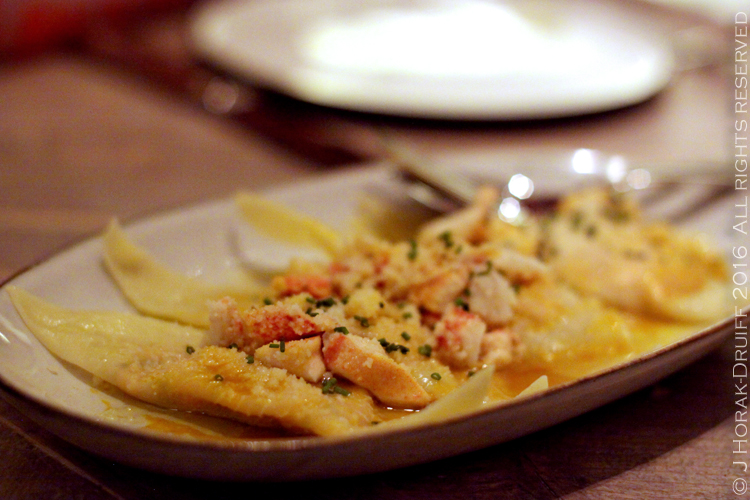 For our mains, we once again tried a few dishes from the menu, starting with the squid ink risotto topped with crispy baby octopus (£8.50).  I’m not sure if we had a special sharing portion, but if that is the size of the regular dish, it’s excellent value for money.  The squid ink not only colours the entire dish a dramatic black, but also lends a strong seafood flavour to the rice – and we all liked the textural contrast of the crispy baby squid on top. The line-caught whole Mexican  pink grouper (£22.00) made for an impressive sight as it arrived at the table.  It’s not a handsome fish to look at, but cooked in a wood-fired oven with olive oil and lemon, it’s a beautifully moist yet firm fish, shot through with the smoky aroma of a wood fire. The barbecued skate wing (£15.00) was nicely charred on the outside, moist on the inside, and slathered in lashings of butter.  To accompany all of this fishy deliciousness we also had an impressive mixed salad with feta cheese; sautéed potatoes with Parmesan & truffle (£3.00); and sautéed spinach (£2.50). Desserts were no less impressive than mains, starting with an enormous sharing portion of vanilla pannacotta topped with blackberries and blueberries (£7.90) This was wonderfully creamy, flecked with vanilla seeds and topped with a crispy caramel crust.  The other dessert was the utterly addictive Valrhona Andoa Noire 70% chocolate cake with vanilla ice-cream (£7.50). Less of a cake and more of a hot chocolate lava pudding, this was practically inhaled by our group – rich and decadent but worth every calorie! 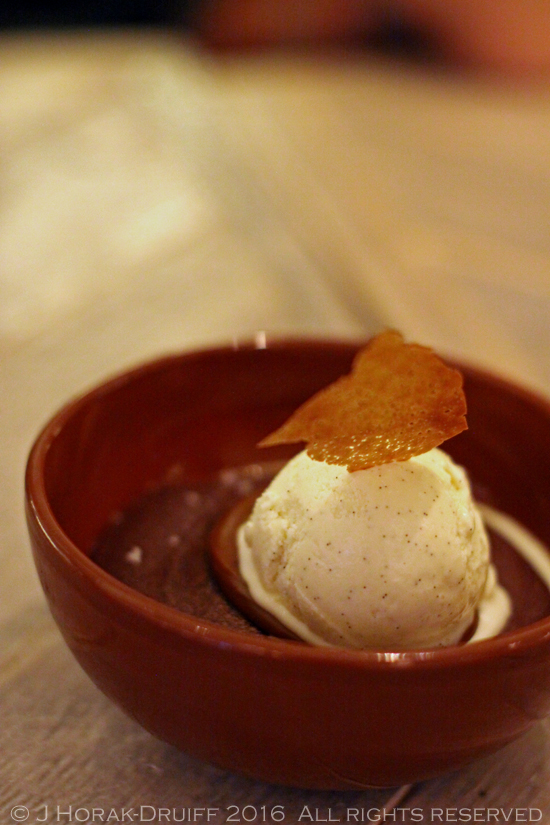 Overall, I was most impressed with the food at Bouillabaisse.  I am not really one for niche restaurants, but  here, the idea seems to work and the menu has cohesion.  Jordan is tremendously personable and obviously also a very steady hand at the helm in the kitchen: everything we tried was excellent both in terms of the raw ingredients and the finished dish.  I also liked the decor but I have to say that it feels sightly incongruous to be sitting in a room covered in rustic weathered wood boards in the middle of Mayfair; or to be offered a lobster platter at a restaurant without tablecloths. I can see why they have gone for this decor, but on the other hand, I also wonder whether Londoners looking to splash out on a seafood platter might not plump for a venue with a bit more old-school plushness like Wilton’s, Le Pont de la Tour, or J Sheekey. But then there is that blindingly good bouillabaisse… And with offers like a 2 course lunch for £19.95 (Monday to Friday,12h00-16h00 and Saturday 13h00-16h30);  or a 3 course pre-theatre including wine or a cocktail for £29.95, Monday to Saturday 18h00-19h30, Bouillebaisse deserves serous consideration as a venue for your next seafood blow-out.

For another perspective on our evening, see London Unattached’s review.

DISCLOSURE:  I enjoyed this meal as a guest of Bouillabaisse but received no further remuneration to write this post.  I was not expected to write a positive review – all views are my own and I retain full editorial control.