You are here: Home / Interviews / An interview with chef Jacques la Merde 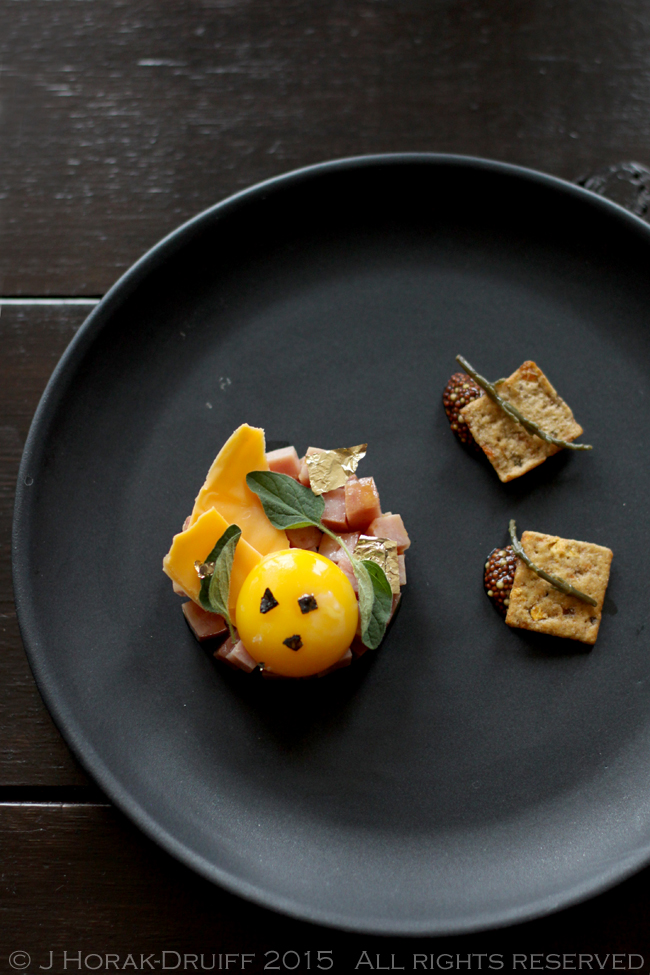 I know people who swoon over the art in the Louvre; who can spend hours rhapsodising about the classical art of the 1600s, or the amazing light in the works of the Dutch Old Masters.  But me, I’ve always been more of a modern girl.  Aside from anomalies like the astonishing William Turner, the art I really like looking at originated in the late 1800s onwards – just about when the literal and figurative started to give way gradually to the abstract.  In my mid-20s I went through a phase of being obsessed with mid- to late-20th century art, the weirder the better – from Basquiat to Vienna actionism, to land art, to Keith Haring. So when we arrived in London in 2000, I was naturally attracted to the fairly recently opened Tate Modern.  There was much food for thought there, but one of the works that stuck in my mind was an installation that from a distance looked like a colourful wall collage a la Matisse – but when you got closer you realised that this cascade of beautiful colours was made up of discarded pieces of coloured plastic items foraged from rubbish bins and dumpsters.

The reaction that this evokes in most people is mild distaste – after all, rubbish is dirty and ugly right?  But this is at odds with the fact that your eyes are telling you it is beautiful, at least in this context. The reaction is not dissimilar to what I felt when I first saw chef Jacques la Merde’s Instagram images.  Because you see, chef Jacques is an artist: his canvas is a blank plate and his medium is food.  Armed only with a vivid imagination, a sous vide machine and a pair of tweezers, he puts together plates that rival cutting-edge Michelin star restaurant plates in their delicacy and beauty.  Each image garners thousands of likes and his Instagram followers top 85,000. But when you read the captions, there is a surprise waiting.  Rather than artisan aioli, organic heritage carrots and wagyu beef, his ingredients are the kinds of food many of us look down on: reformed luncheon meat, Miracle Whip mayonnaise, and his beloved Doritos.  It’s no less of an artistic statement and no less challenging than the works of artists like Basquiat. But ask chef Jacques whether he thinks what he is doing is art and he responds with a characteristically enigmatic: “HEY, WHAT DO I KNOW, I’M JUST PLATING DORITOS!” 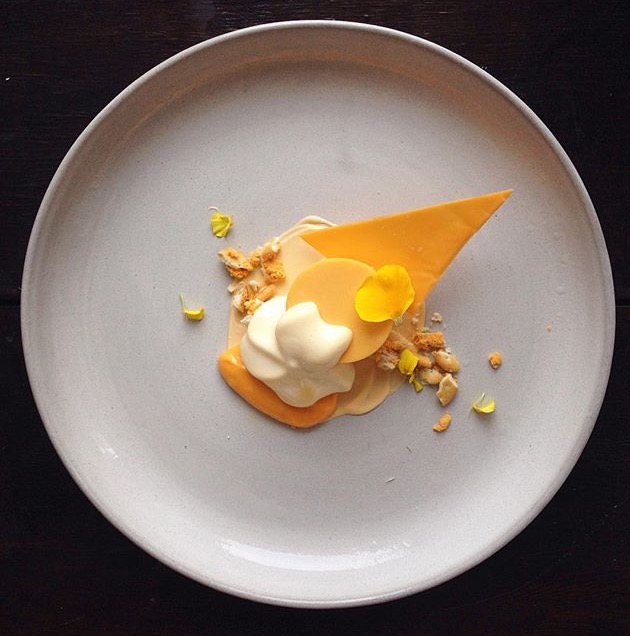 Cast an eye over his Instagram feed, you will see that Jacques is a man slightly obsessed by Doritos and wholly untroubled by the whereabouts of the CAPS LOCK key on his keyboard. All his captions and responses are in capitals, but rather than being of the shouty, ranty, angry variety, Jacques capitals convey more of a teenage labrador’s unbridled enthusiasm for food – and life. His hashtags are legendary and deserving of a dedicated post – he has single-handedly brought the word soigné into the lexicon of legions of his fans (literally translated, it means neat although Jacques takes it soooo much further!) and regularly creates hilarious new tags like #deepfryordietryin, #whoknewthatwouldbesuchabadidea or #Jamaicanmehungry. In his weekly posts, he shares snippets of his daily life – a particularly difficult service at the restaurant where he works; personal relationship ups and downs; and various adventures that he and his sous chef José have experienced (like the shattered restaurant lobster tank, leading to the hasty adding of a 2 for 1 lobster special to the dinner menu) – but always with a hugely positive attitude, a lightness of heart and a generosity of spirit.  All his readers are “bros”, and his online persona comes across as an average joe who loves his job, just fumbling his way through life like the rest of us. But despite sharing regular updates of his life and the huge social media interest in him, Jacques prefers to remain anonymous. So I was honoured recently to get to meet him when our paths intersected on a film shoot.  You see, after nearly a year of anonymous internet stardom, Jacques is preparing for a big reveal in 2016, which will include joining various other chefs to cook at a Jacques-themed dinner as well as starring in one of a series of short documentary films that AEG is making about pioneers working in the food industry. I was invited along to join the film crew on their day of filming Jacques, and to meet and chat to the man himself.  Whereas many other days with chefs might start out with a trip to the local farmers’ market to source local, seasonal ingredients, our day with Jacques started out with a rather surreal trip to the nearest (tiny) convenience store.  Staff looked on in bemusement as Jacques inspected the aisles, trailed by a cameraman, sound technician, director, and a blogger with a camera (that would be me!).  We watched as Jacques picked up and carefully examined reformed ham steaks, day-glo pink pastries, and (of course) Doritos, trying to decide how he would populate his next plate with colour, flavour and texture. 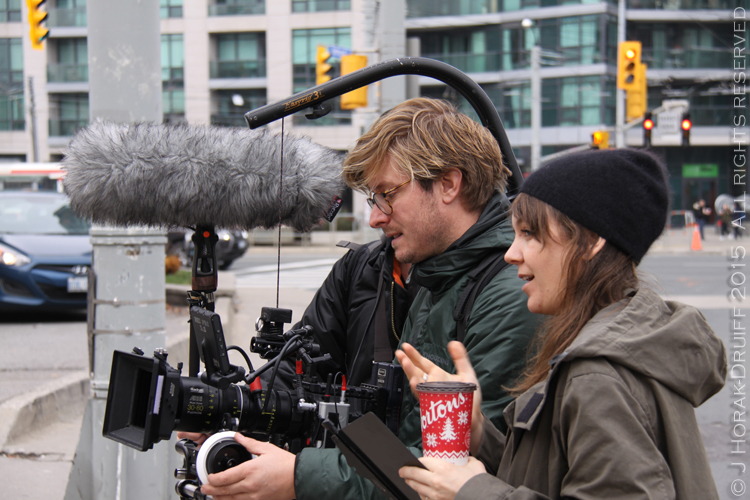 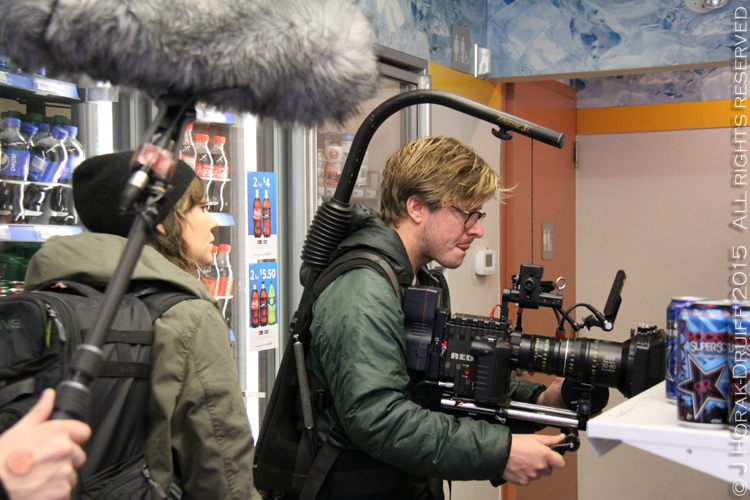 Back in the studio, Jacques transformed into chef mode, showing us how to rinse the white off an egg yolk that has been cooked at low temperatures in a sous vide, tweezering everything he could lay his hands on, and talking us through how his plates are created.  Jacques is not entirely comfortable with the flippant description of his work as “plating junk food as haute cuisine”  or the accusation that he “glorifies junk food”.  He admits that his minimalist plates where ingredients are tweezered into place can be polarising, but he also questions whether a Dorito, which does not pretend to be anything it’s not, is in any way more of a junk food than a “healthy” cereal bar packed with trans fats and artificial sweeteners. And shouldn’t the question be why so many more people have access to convenience store luncheon meat, mayo and crisps rathern than heritage beetroot and organic beef? It’s a big conversation, but right now it’s not one that Jacques has time for – he has Doritos to crush into edible soil! He has negative space to create! He has things to tweeze! 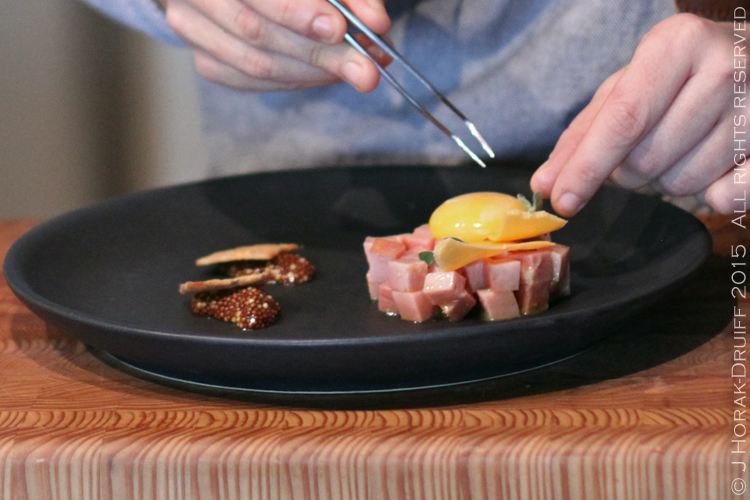 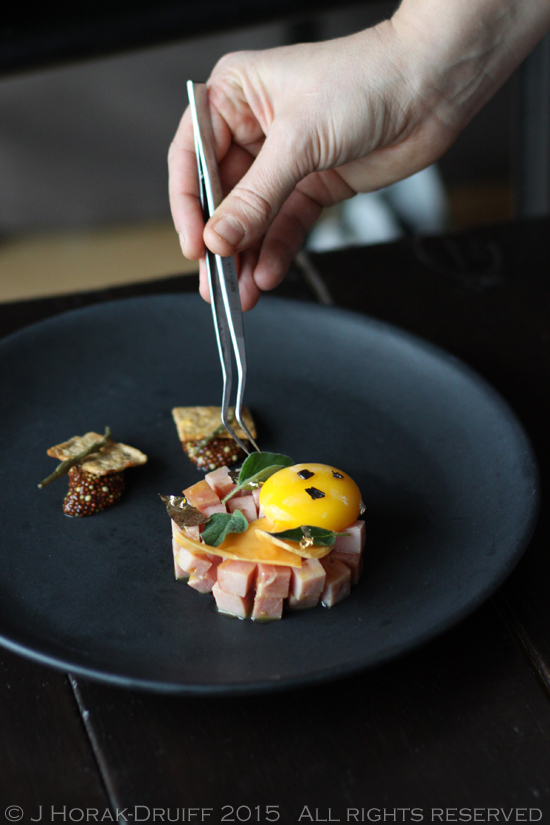 So instead, I asked him a few rapid-fire questions and here’s what he had to say:

IM A BIG FAN OF CLASSIC ROCK!!!!  LATE SEVENTIES, AND SOME EARLY EIGHTIES!!!!  TYPICALLY WHEN IM PREPPIN I LIKE SOMETHIN A LITTLE MORE UPBEAT, LIKE HUEY LEWIS OR PHIL COLLINS . . . WHEN IT COMES TIME TO PLATE, I PREFER SUMTHIN THAT SPEAKS TO THE DRAMA OF WUT IM TRYIN TO CREATE, AND THATS WHEN I BLAST THE JOURNEY OR STYX!!!!

MY GEORGE FOREMAN GRILL.  HANDS DOWN MOST USEFUL PIECE OF EQUIPMENT IN MY KITCHEN!!!!

MEXICO!!!! SADLY I’VE NEVER BEEN AND I DO LOVE SEVEN LAYER DIPS!!!!

KETCHUP CRISPS!!!!! THE VERY IDEA BLEW MY MIND, LIKE TWO WONDERFUL THINGS IN ONE AND IN A SHINY, CRINKLY PACKET TOO. I WAS SURPRISED AND DELIGHTED!!!! 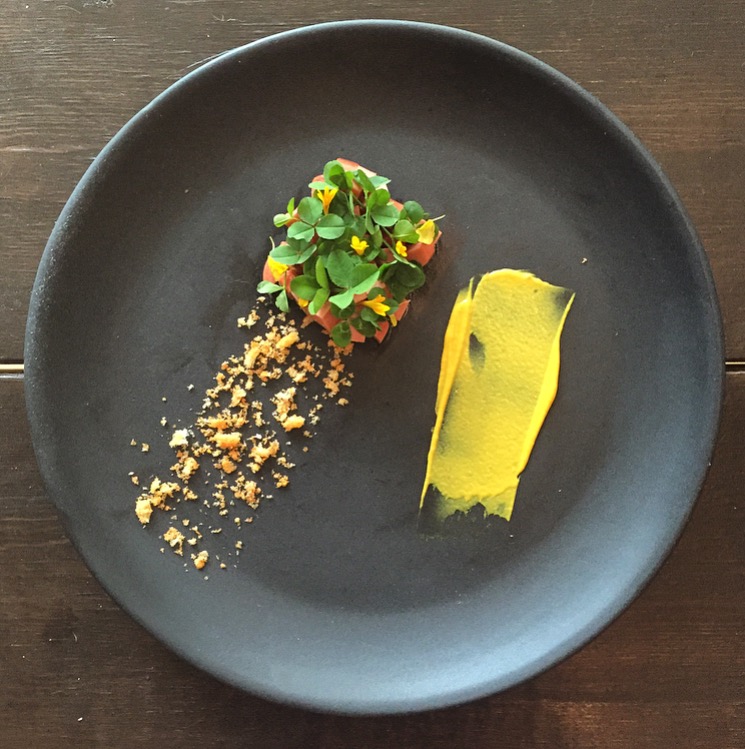 *COULD NOT* ISNT A WORD I UNDERSTAND.  I BELIEVE ANYTHING IS POSSIBLE IF U BELIEVE IN URSELF!!!!

COOL RANCH!!!!  ITS NUANCES ARE MORE SUBTLE AND COMPLEX THAN THE ORIGINAL, AND I FIND IT EASIER TO PAIR WITH OTHER BOLD FLAVORS. 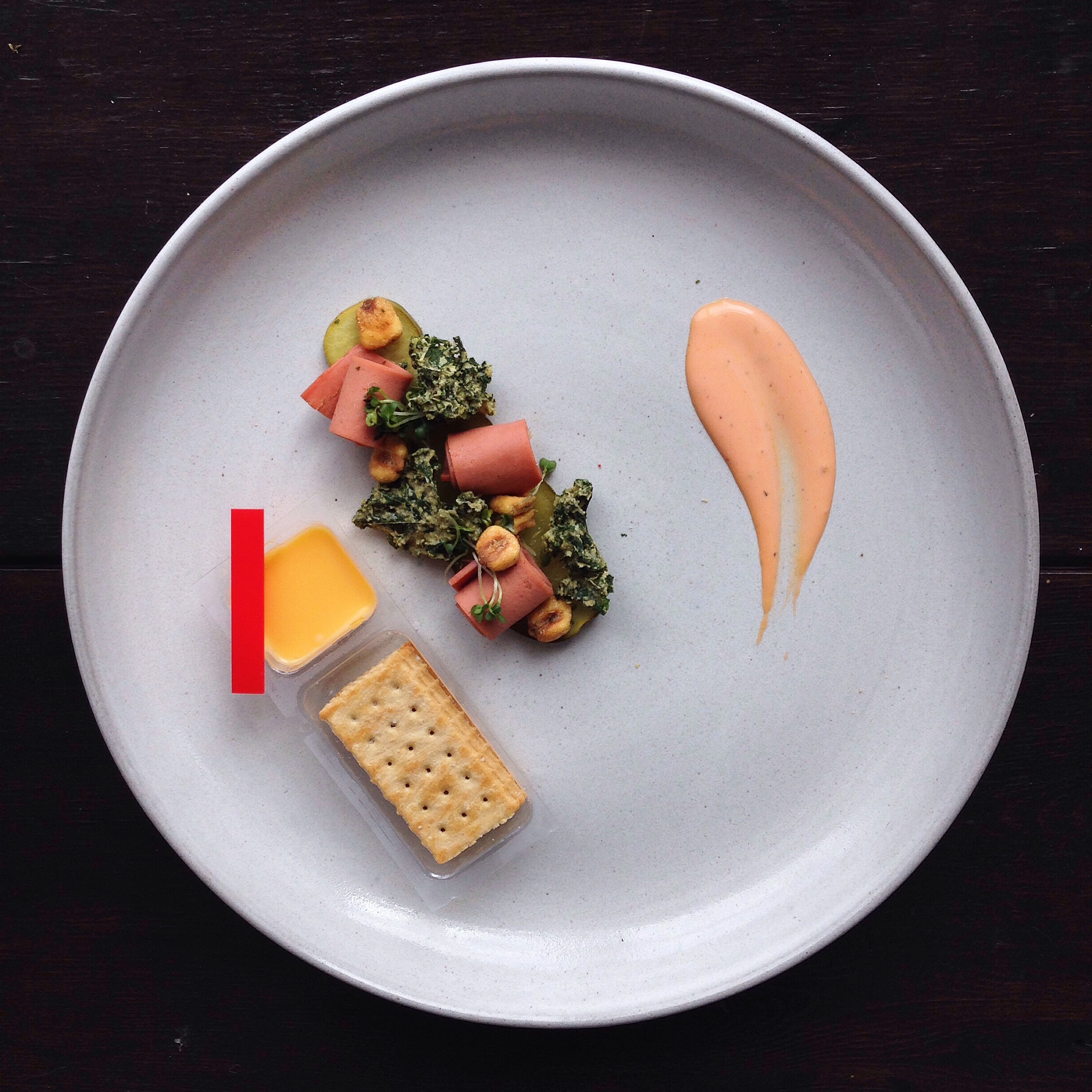 I HOPE NEVER TO BE ON DEATH ROW, BRO!!!!! BUT IF I WAS, IT WOULD DEFINITELY BE THIN-CRUST PIZZA FROM LIBRETTO PIZZERIA IN TORONTO – HALF MARGHERITA, HALF SAUSAGE W/ ARUGULA. SO TASTY, SO SOIGNé!!!! BUT SERIOUSLY, BROS – IF ITS MY LAST MEAL ITS MORE ABOUT THE PPL UR WITH THAT WUT UR PUTTIN IN UR MOUTH.  I’D EAT DEEP-FRIED CARDBOARD IF IT MEANT I COULD ENJOY IT W/ THE PPL I LOVE!!!!

If you want to ride the whirlwind that is chef Jacques’s life, follow him on Instagram.  AEG is currently working on an exciting project about how different taste experts take taste further throughout the different stages of the food preparation process. The project involves some of the pioneers of the global cooking scene and spans 3 continents. More info about the project will be launched in January 2016 so keep an eye on the AEG Facebook page and follow the Twitter conversation on #TakeTasteFurther.