You are here: Home / Travel / Cruise ships / An evening of fine wine with P&O Cruises We’ve all heard the quotes about ageing and wine – nuggets like: “Men are like wine – some turn to vinegar, but the best improve with age”; or “I am ageing like fine wine – getting more fruity and full-bodied”. But as most of us know, older does not always mean better when it comes to wine. A fruity, bright Vinho Verde from Portugal is made to be drunk young and zesty; and in Beaujolais there is actually a race between producers to get wine made, bottled and served to customers fastest (it’s an astonishing 2 months from vineyard to suburban wine rack).  Other wines might be suitable for ageing (a full-bodied red or a sweet dessert wine) but lack the quality in the basic product, meaning that it just get older, not better. But then you have the rare exceptions – like the 1837 Madeira that I recently tried, courtesy of P&O Cruises.

Let me backtrack a few steps. The occasion was an evening of canapés and fine wines to hear about P&O’s forthcoming plans, particularly those related to food and drink – and what better place to talk food and drink than Hedonism Wines, a Mecca for lovers of fine wines and spirits in London. In attendance were a number of food and drink journalists and bloggers, as well as two of the team of food heroes with whom P&O have teamed up to add sparkle to their food and drink offering aboard: the irrepressible Olly Smith and patissier Eric Lanlard, both of whom I had met during the P&O Britannia naming ceremony. Among the news snippets that P&O were able to share with us were the following: 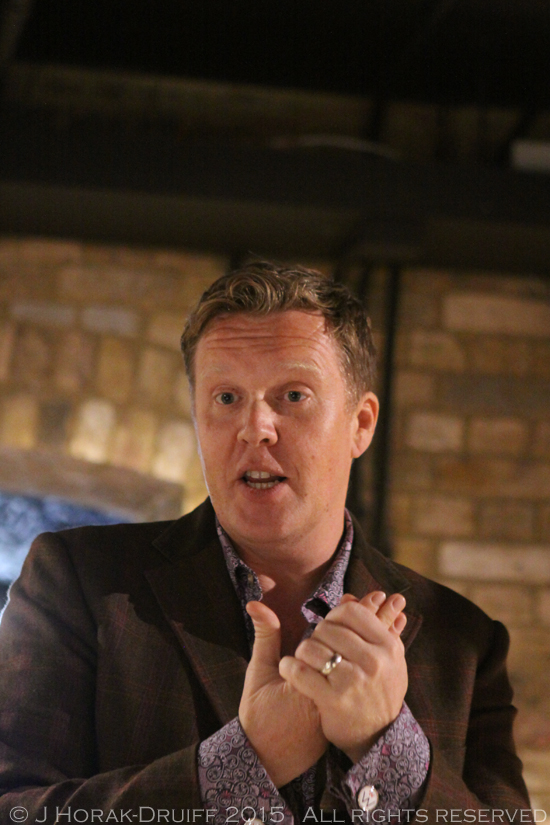 But what about the fine wine, I hear you ask? As I mentioned, the wines had been selected by Olly Smith and contained some real corkers. We were welcomed by glasses of Krug Grand Cuvee Champagne, an elegant non-vintage bubbly with toasty notes balanced out by a lemony freshness.  This was followed by a magnum of 2012 Montelena Chardonnay from the Napa Valley in California. I have never been one of those “anything but Chardonnay” wine drinkers.  I love Chardonnay in every style from unoaked to sparkling to chewing-on-the-barrel wooded – but even I could see that this was a wine to convince even the most ardent Chardonnay-phobes.  With no malolactic fermentation and minimal oak, it was a gloriously pure expression of the Chardonnay grape with none of the overwhelming creaminess that many people dislike.  Next up we tasted a magnum of 1998 Barolo Cannubi Boschis Sandrone, a superbly rich and concentrated Italian red with toasted oak, spice, mineral and dark, ripe fruit flavors.  But there was even better to follow:  a magnum of 2005 Verité La Joie from Sonoma – a classic Bordeaux  blend of 67% Cabernet Sauvignon, 12% Merlot, 12% Cabernet Franc, 7% Petit Verdot and 2% Malbec which was given a perfect score of 100 points by critic Robert Parker (one of only about a dozen wines to achieve this).  Despite a hefty 14.7% alcohol, this is a superb wine with a nose of  blackberries, fruitcake and notes of lead pencil and a rich, ripe full-bodied palate that fills the mouth without every being too overwhelming or tannic.  Utterly delicious! But Olly was saving the rarest for last: a single bottle of Bual Reserve Oscar Accioly Madeira made in 1837 (the year that P&O was established) and one of probably only a handful left in the world.  A bottle of this was sold at auction in 2014 for £1,600 so a hushed silence fell around the table as our tasting portions were poured.  The colour was a beautiful clear amber and the palate was rich, nutty and surprisingly youthful – such a special treat! 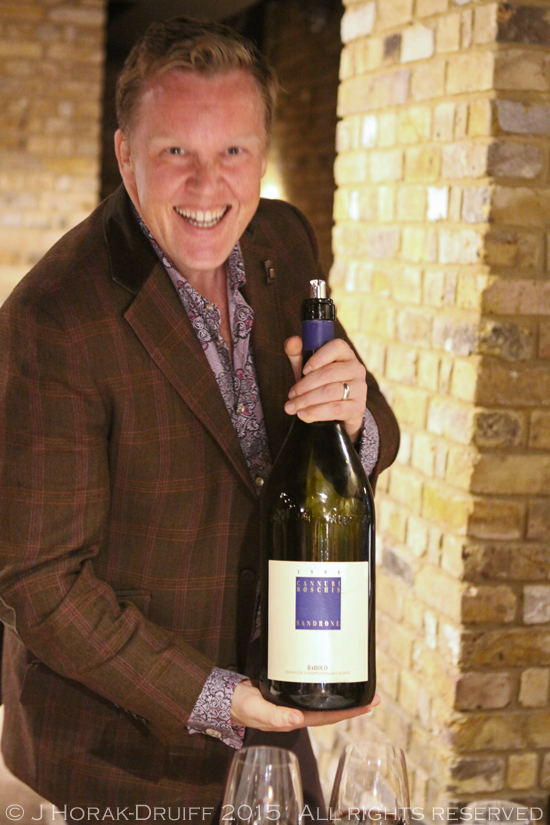 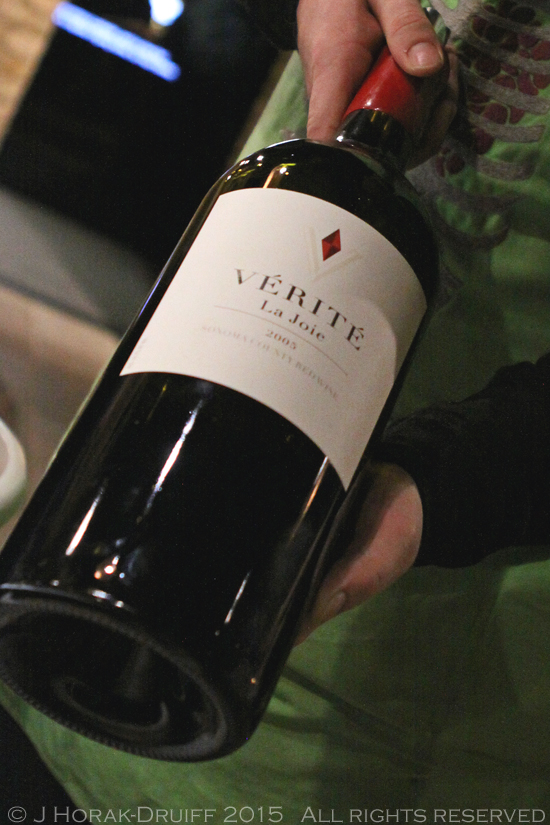 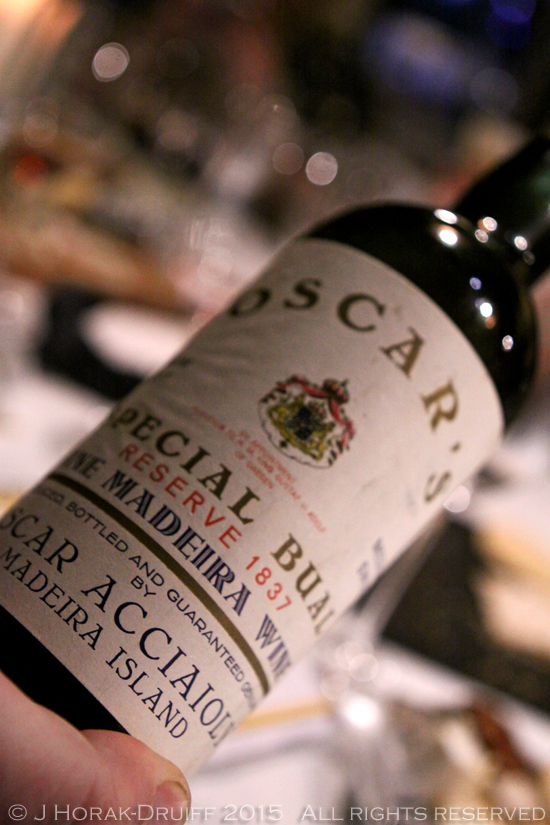 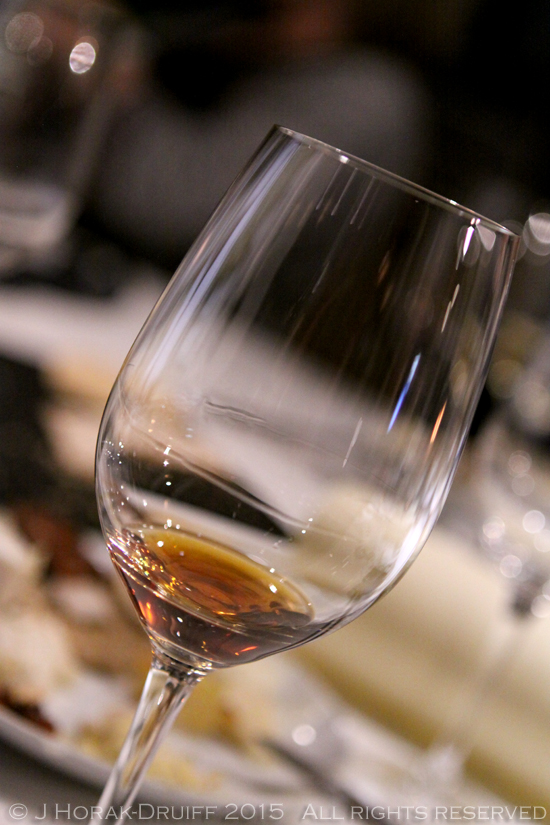 The wines were accompanied variously by canapés (the smoked salmon with caviar and the crab tartlets stood out); an excellent selection of cheeses; patisserie from Eric Lanlard; and chocolates from Paul A Young.  Charlie Turnbull’s selection of British cheeses was just superb and included some Wigmore (soft ewe’s milk cheese);  Sharphams Cremet (a soft cheese made from a mixture of cow and goat milk); Goddess by Alex James (a creamy semi-hard cheese washed in cider brandy – my favourite); Swaledale goat (soft, creamy and enjoying PDO protection); Worcester White (an adaptation of Cheddar with a fabulous nutty flavour); Cornish Kern by Catherine Mead (a washed curd cheese similar in style to Edam but with its own distinctive flavour); and Blue Monday by Alex James (a wonderfully creamy and aromatic blue cheese).  Eric Lanlard’s patisserie was as delicious as it was gorgeous – my favourites were a mini-bombe of blueberry  mousse covered in a glistening layer of blueberry jelly on a biscuit base; and a pistachio financier.  And of course, I can never resist chocolates from the hugely talented Paul A Young! 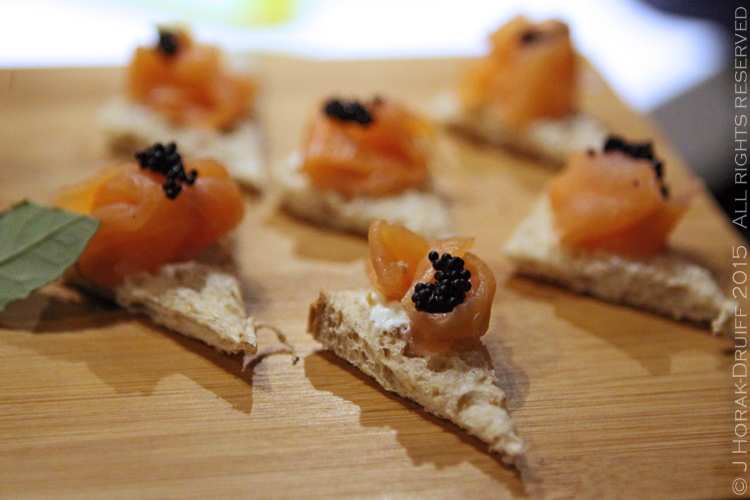 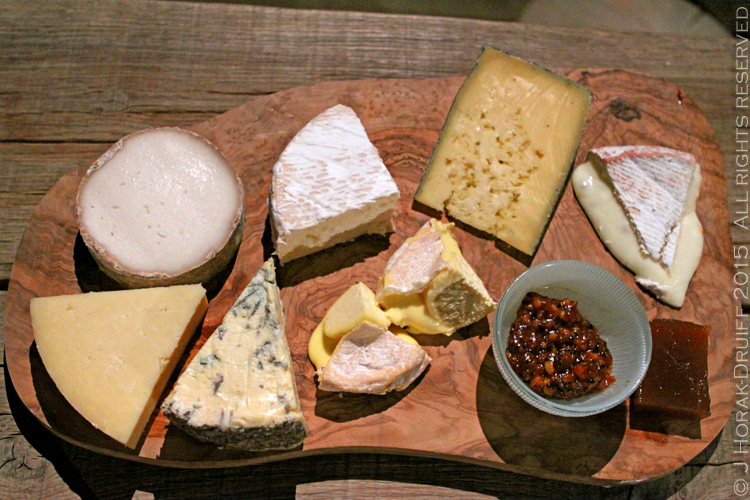 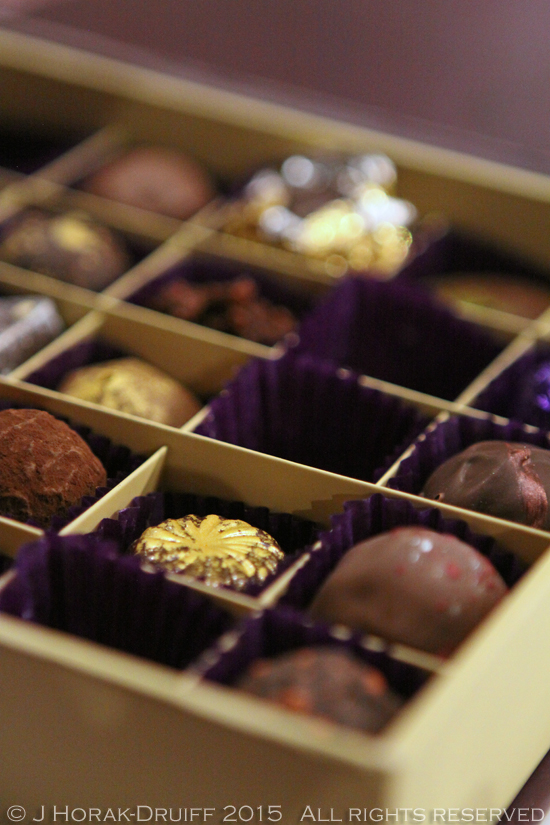 See the P&O website for more info on the Battlechefs programme or for more info on special food heroes cruises. Or have a look at what I thought of Britannia when I spent a night aboard for her 2015 naming ceremony.

DISCLOSURE:  I attended this event as a guest of P&O Cruises but received no further remuneration to write this post.  I was not expected to write a positive review – all views are my own and I retain full editorial control.