You are here: Home / Shows, launches and events / Taste of London Festive Edition 2015 – what I ate 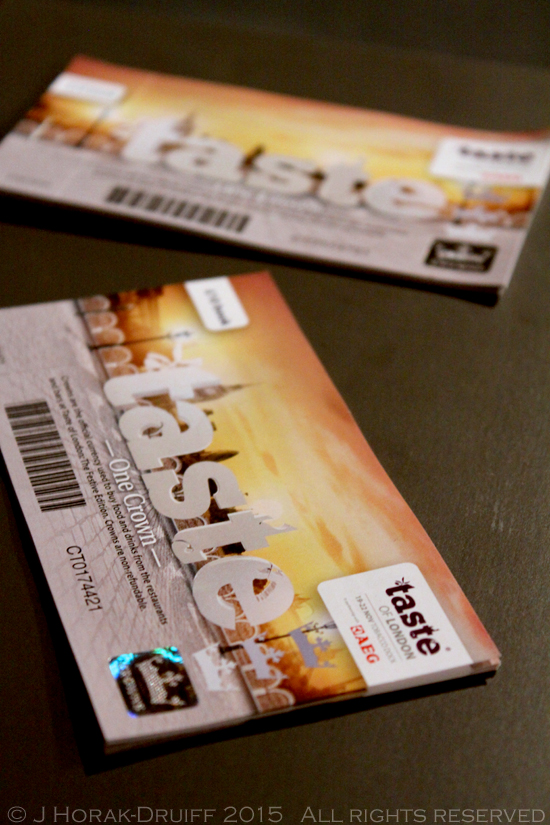 Back in the summer I wrote about my experiences at Taste of London, the annual foodie jamboree that takes place in Hyde Park.  It’s a hub for like-minded people who are passionate about good food and drink, and a showcase of foodie excellence in every sphere from producers to chefs, restaurants, foodie travel, and retailers.  But as the nights draw in and temperatures drop, the halcyon days of summer and walking around Hyde Park in a pair of slingbacks sipping on Pimms, recede to a distant memory.  Never fear, though – one of the many offshoots that Taste has spawned is Taste of London Festive Edition, a wintry version of the main Taste of London festival that takes place in November.  This is where I headed last Friday night, and here’s what I did.

Taste Festive has previously been held in the ExcEL centre on the Royal Docks, but this year it was held at Tobacco Dock, an atmospheric venue roughly between St Katherine’s Dock and Canary Wharf. These old warehouses lend themselves well to this sort of event, with larger atmospheric spaces as well as smaller and more intimate ones. The principal sponsor, once again, was AEG and upon arrival Ailbhe, Krista, Rosana and I headed first for their live cooking area (stopping to pick up a restorative glass of bubbles along the way!).  In the live cooking demo kitchen there were multiple cooking stations, each equipped with a sleek AEG induction hob – the perfect hob if you want instant heat control at the touch of a fingertip. Jeremy Pang of the School of Wok was conducting sessions showing off how perfect these hobs are for stir-frying and so after a brief introduction to how induction hobs work, we were set to work making Singapore noodles.  Ailbhe took over wok-tossing duties (hader than it sounds!) while I worked my way around the “clock of wok” – the clever mise en place system where all your ingredients are arranged as if on a clock face and you simply work your way round them in a clockwise direction to follow the correct sequence. In no time at all we were tucking into a sizzling plate of noodles – thanks Jeremy! After a quick visit to the AEG Home Kitchen area where Kathy from Gluts & Gluttony private chef service was putting an AEG combination steam oven through its paces, making an AMAZING spiced pumpkin and sage cake with thyme and feta frosting (really!), we headed off to see what else the festival had to offer. 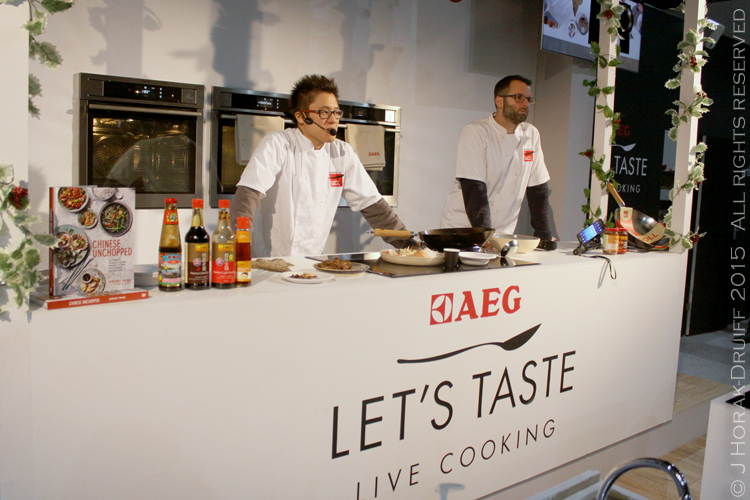 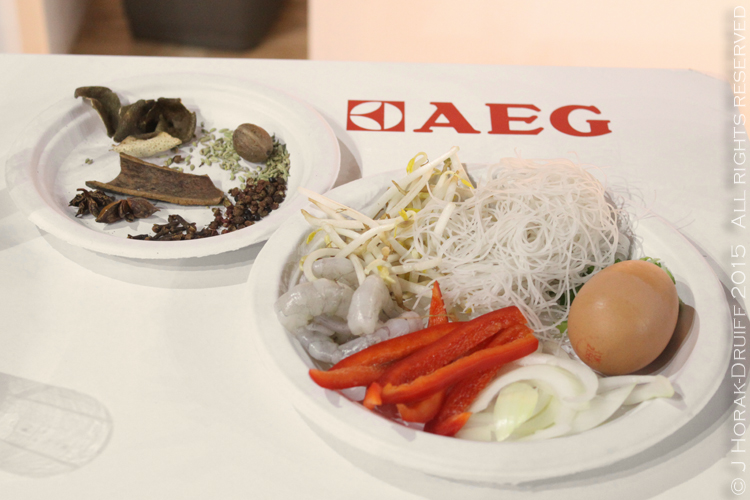 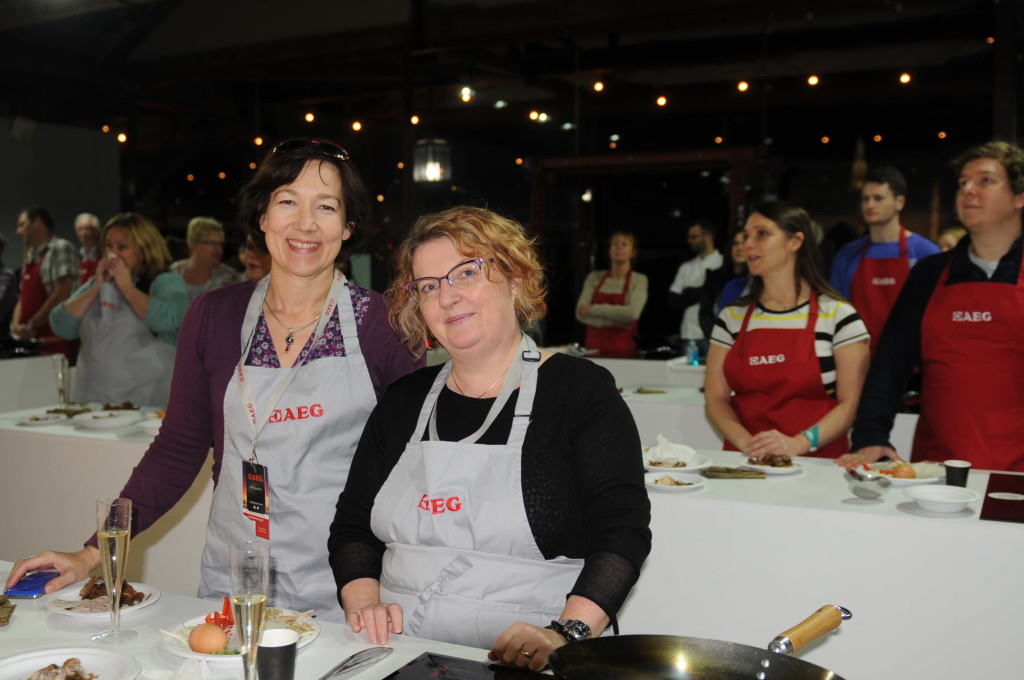 Above image courtesy and © of AEG 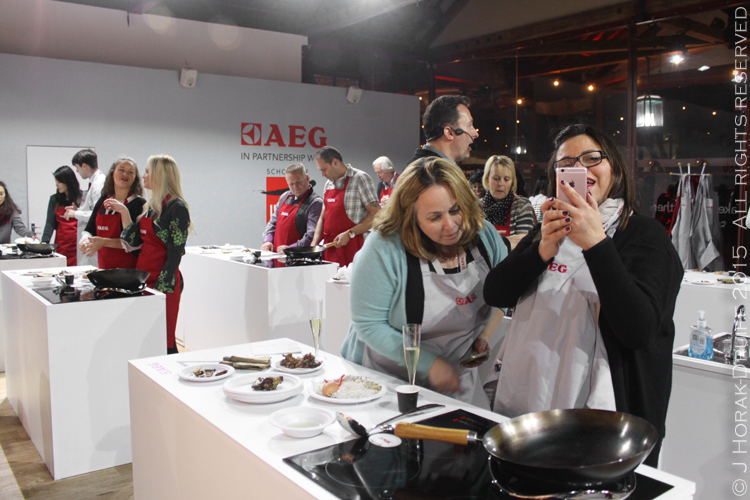 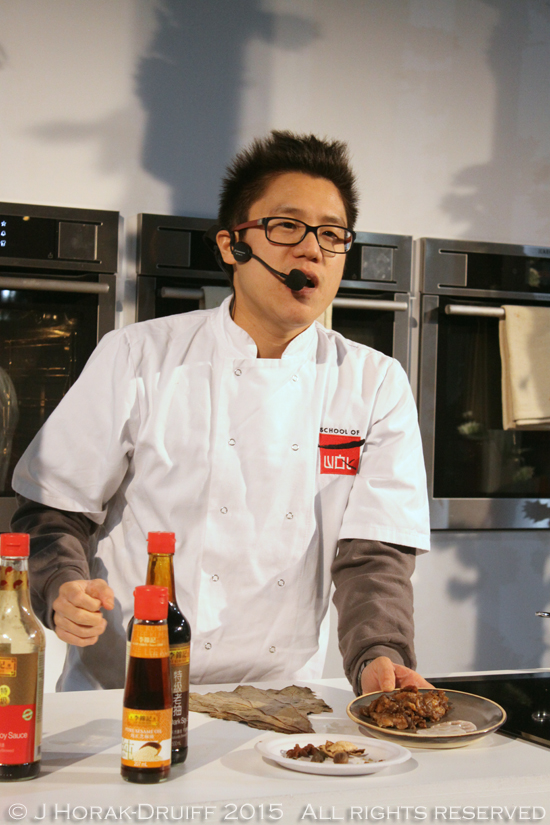 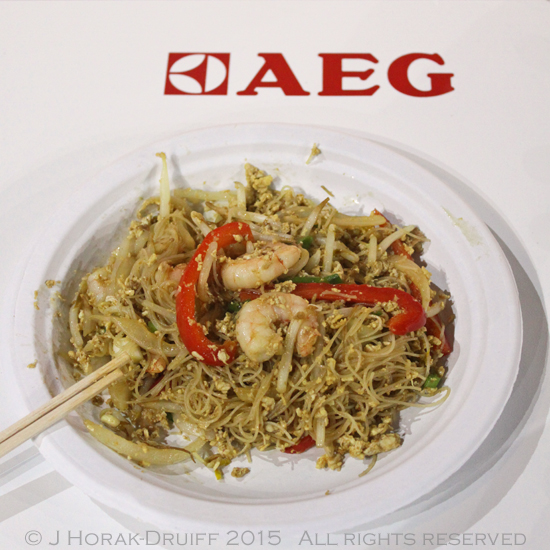 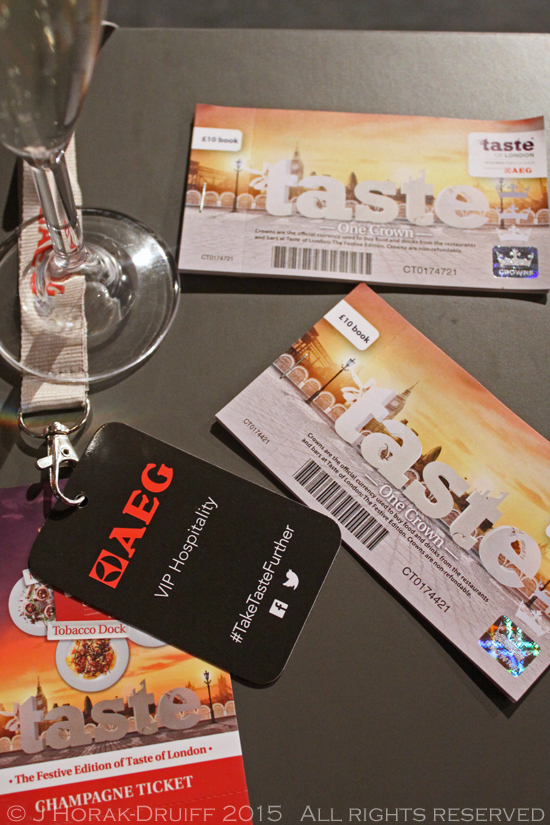 One of the new features launched at Taste this Summer was the Daily Special stand, meant to showcase emerging culinary talent and occupied by a different new restaurant or chef each day.  On the day we visited I was dead keen to try restaurant-in-resident Joe Doe, particularly for their beer-butt pheasant with truffled mac ‘n cheese… but it was not to be: they had run out by early evening. Ah well. But just next door was one of my favourites: Korubuta, makers of pork belly buns of distinction! There was an impressive queue and a dramatic flaming robata grill but they were so organised that we only waited about five minutes to receive our Buns of Great Delight.  Scott Hallsworth takes his cue from the culture of izakaya Japanese drinking dens where the food served is packed with strident, umami-rich flavours and is messy and satisfying rather than beautifully presented and delicate – and that’s exactly how I’d describe the BBQ pork belly in steamed buns with spicy peanut soy.  They’re messy, pillowy, sweet, salty, spicy and crunchy all at once and they are so good. 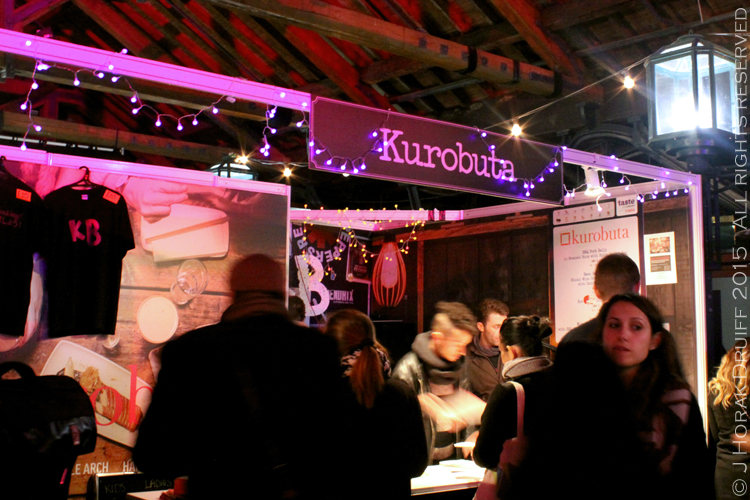 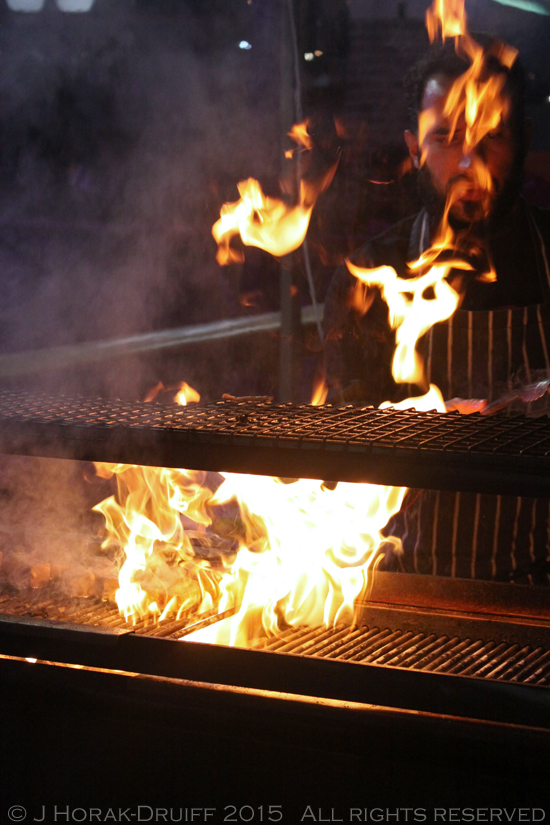 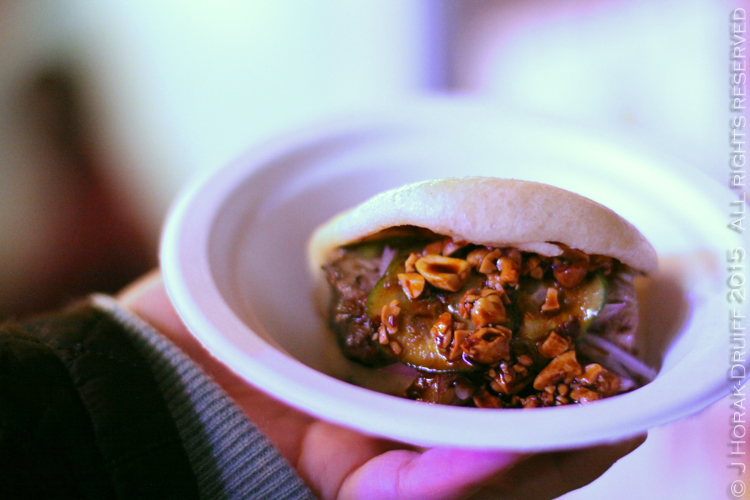 From there, we wandered over to Tom Aikens who, as you may recall, won two Michelin stars aged only 26 but his eponymous restaurant went into administration in 2008. More recently, he has been focusing on his chain of casual restaurants, Tom’s Kitchen, but he is reportedly opening a new flagship restaurant in London in 2016. On the menu was a truffled mac ‘n cheese and a spicy crab cake with red pepper relish.  I tried the former and it was… nice, but nothing to write home about and rather lacking in truffle flavour for my palate.  But Ailbhe tried the spicy crab cake and it was glorious – properly spicy, packed with crabmeat, and beautifully paired with the homemade sweet, sticky red pepper relish. 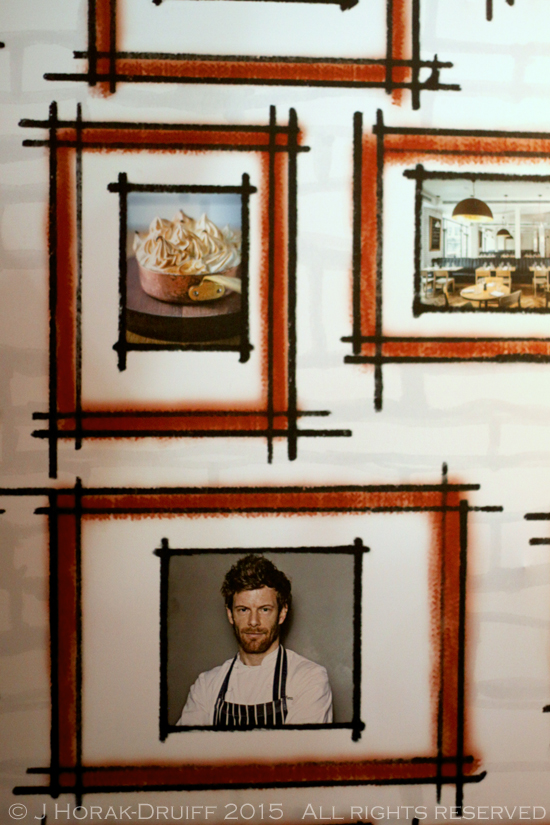 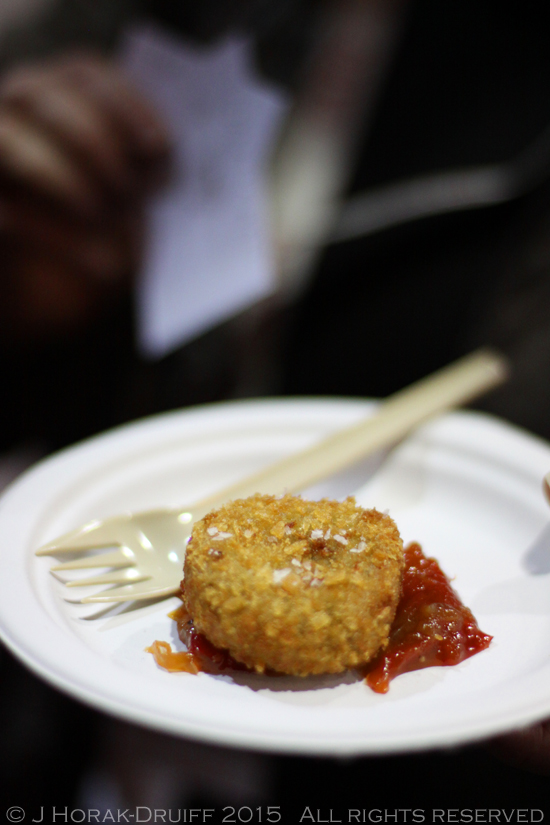 Moving not very far (next door in fact, if memory serves!) our next dishes were from M Restaurant, apparently the new place to go for steaks in London.  I’ve been rather intrigued by the menu including biltong, boerewors and, erm, kangaroo so I was keen to try their offering. I probably shoul dhave known better than to choose something quite so similar to the Kroubuta Bun of Delight, but I went for the sticky pork bao with pickles and kimchi, while Ailbhe went for the chicken karagee with English wasabi and chilli.  The bun, I am sad to say was a disappointment – the meat was tender but far from sticky and there was very little sign of kimchi other than a pink slick on the bun. But Ailbhe fared better with her chicken which was fantastically crispy, like the besty KFC you could ever imagine, with good flavour to the spicy, creamy sauce – definitely something I would order if I visited the restaurant! 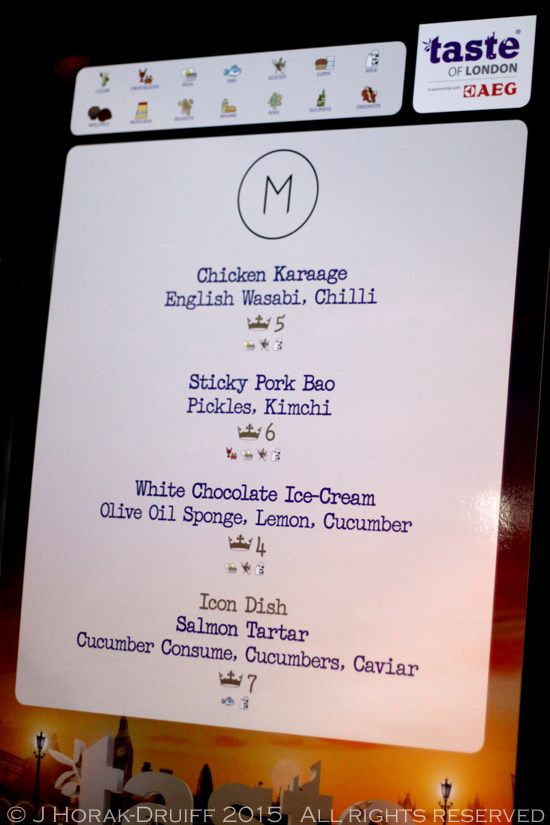 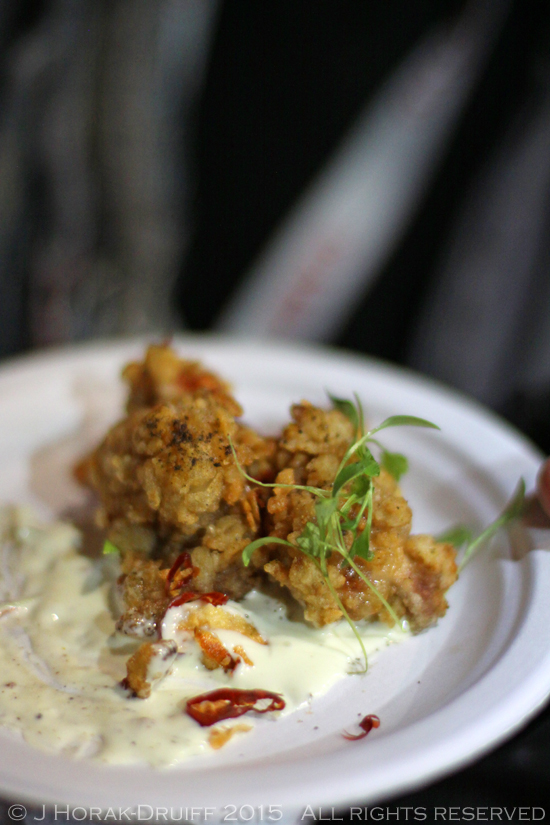 From there I voted that we headed for dessert – and of course there was no discussion in my mind as to what to get: we made a beeline for Tredwells and a cup of their legendary salted caramel soft-serve ice-cream, given a little festive twist with a sprinkling of gingerbread crumbs rather than the usual honeycomb.  As ever, it was a scoop of heaven!  We wandered around a bit while eating this, sampling various drinks, including Prosecco; some smoky Bowmore whisky (an unbelievably good match with the salted caramel soft-serve BTW!); some Rubis chocolate wine (unconvinced!); and some V Gallery toffee fudge vodka (DANGEROUS! And gift ideas for me, obvs!).  When we finally made our way back out into the chilly night we were full of good food, good drink and festive spirit – definitely a fun way to spend an evening! Thanks to AEG and all the exhibitors for putting on yet another great show. 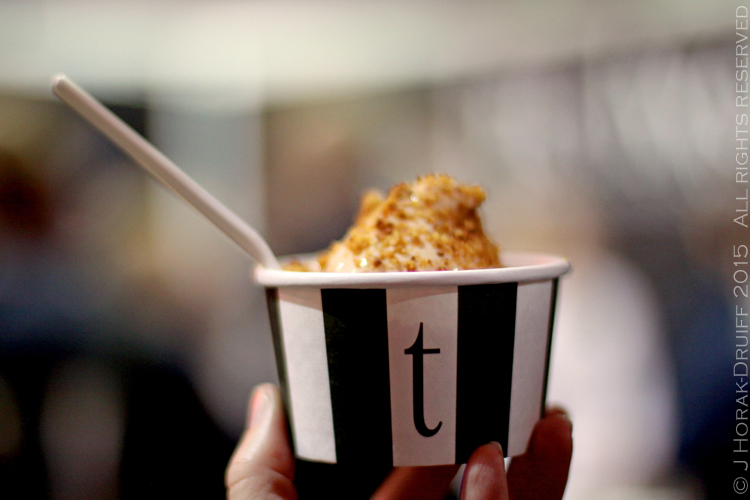 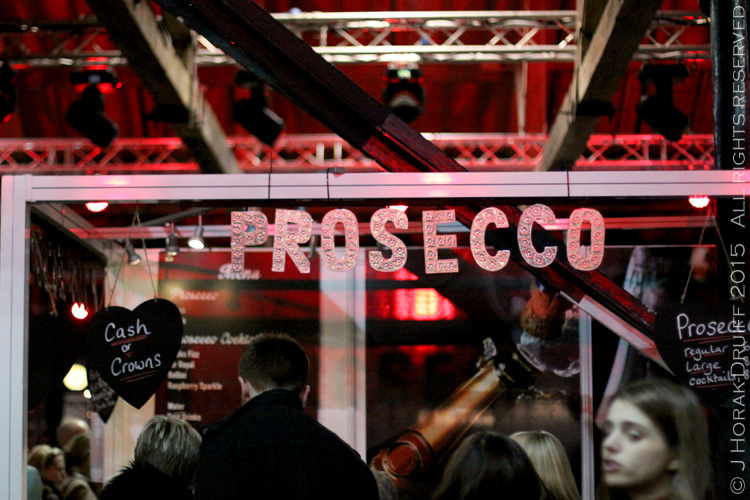 DISCLOSURE:  I attended this event as a guest of AEG but received no further remuneration to write this post.  I was not expected to write a positive review – all views are my own and I retain full editorial control.