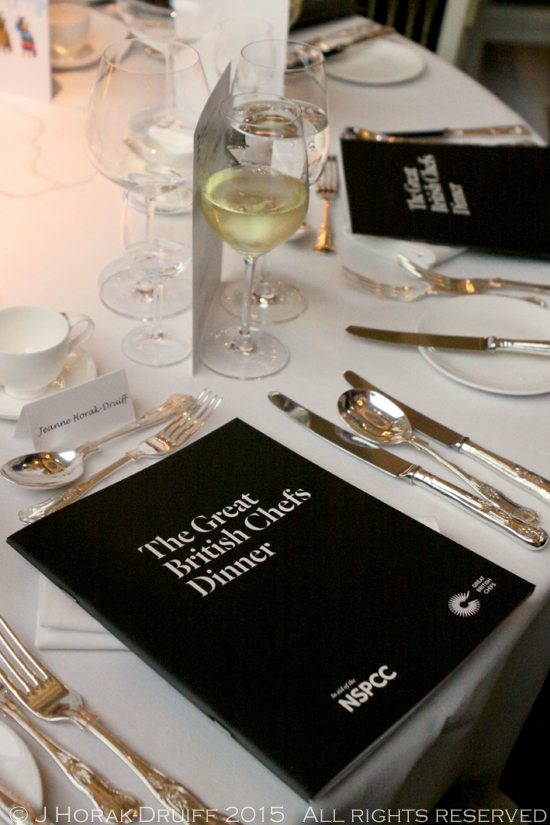 Everybody loves a bit of recognition – and the culinary world is no exception.  Every country and most major cities issue annual lists of top chefs and restaurants, but probably the most universally recognised indicator of culinary success are Michelin stars.  They are the currency of the international restaurant world, the covetable tokens of having been judged as excellent.  Restaurants can be awarded anywhere from one to three stars, with three being the pinnacle of excellence that only 115 or so restaurants (and only 3 in the UK) currently hold. But last year, for one night only, London played host to what was in effect an eight Michelin star restaurant. OK, maybe that’s stretching the truth slightly – it wasn’t strictly speaking a restaurant: it was the annual Great British Chefs gala fundraising dinner in aid of the NSPCC and they had assembled a stellar cast of chefs (Nathan Outlaw, Martin Wishart, Frances Atkins and Mark Dodson) who, between them, were the proud holders of eight Michelin stars.

The dinner was held in the elegant surroundings of the Banqueting House in Whitehall.  The Banqueting House was originally part of Whitehall Palace and was one of the few parts to survive the fire that destroyed the palace in 1698, after which Sir Christopher Wren was ordered to refit it as a Chapel Royal.  It was used as such and later as a military chapel until 1890, after which it served as a museum till 1962 and today it is managed by Historic Royal Palaces as an events venue and a tourist attraction. The ceiling of the Banqueting House is a masterpiece and the only surviving in-situ ceiling painting by Sir Peter Paul Rubens. The monumental 9x6m and 13x3m canvases were painted by Rubens and installed in the hall in 1636, and they remain there today, adding a regal air to the already very grand space. 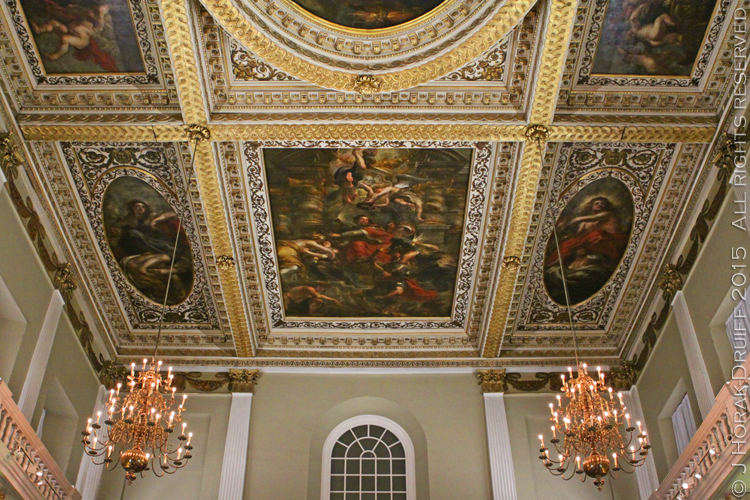 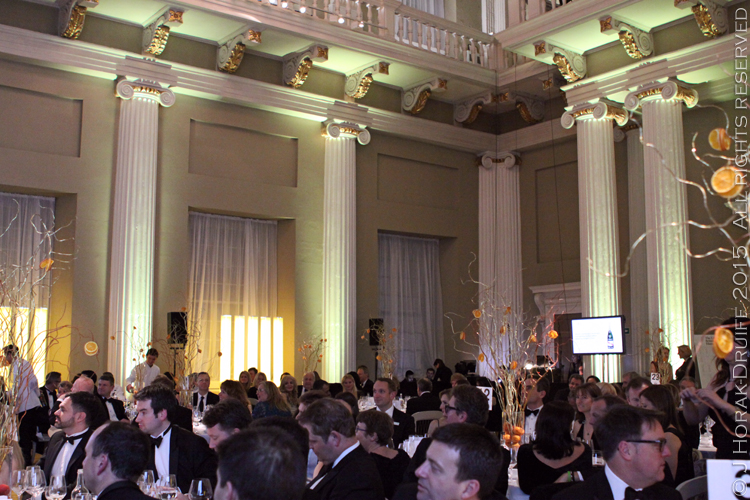 After a Champagne reception on the ground floor, we were seated in the hall and dinner was served, punctuated by short interviews on stage with each of the chefs.  The starter was by Martin Wishart of the eponymous restaurant in Edinburgh which holds one Michelin star. He kicked proceedings off with a dish of braised pork jowl in a winter broth.  I loved the way this was served, with the shredded pork meat encased in a thin layer of vegetables and topped with mashed potato and a sliver ot truffle.  The broth, too, was full-flavoured and robust without being heavy – a perfect winter starter. 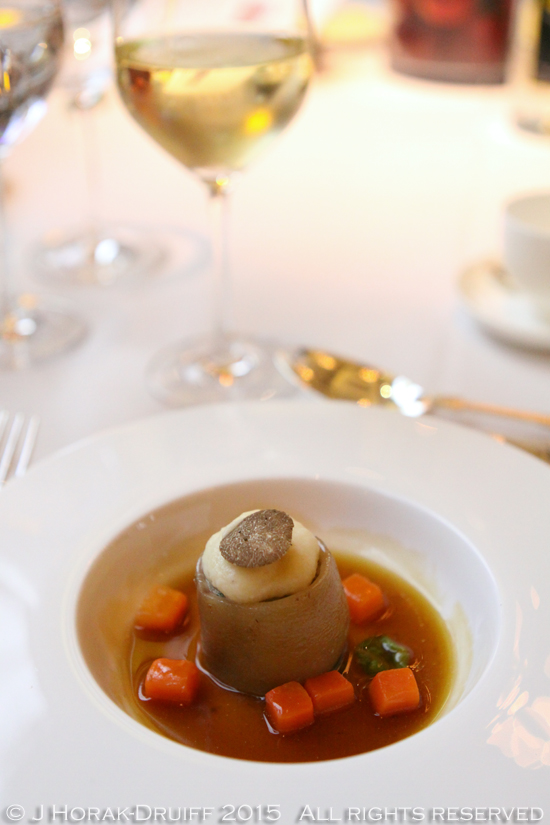 This was followed by the fish course from Nathan Outlaw, holder of four Michelin stars across his stable of seafood restaurants.  Nathan treated us to a dish of  Red Gurnard soup with orange & chilli oil and a crab cake.  I loved this dish: the soup had the deep flavour of a seafood bisque that has been simmering away on the stovetop for hours and was lifted by the bright citrus and chilli flavours.  The crab cake was generously sized and contained more crab than potato (a rare and beautiful thing!) – definitely a dish I could have eaten more of!  Both this and the previous dish were paired with a beautiful white Burgundy: Pernand Vergelesses 1er Cru Sous Fretille 2009, Maison Deux Montille. 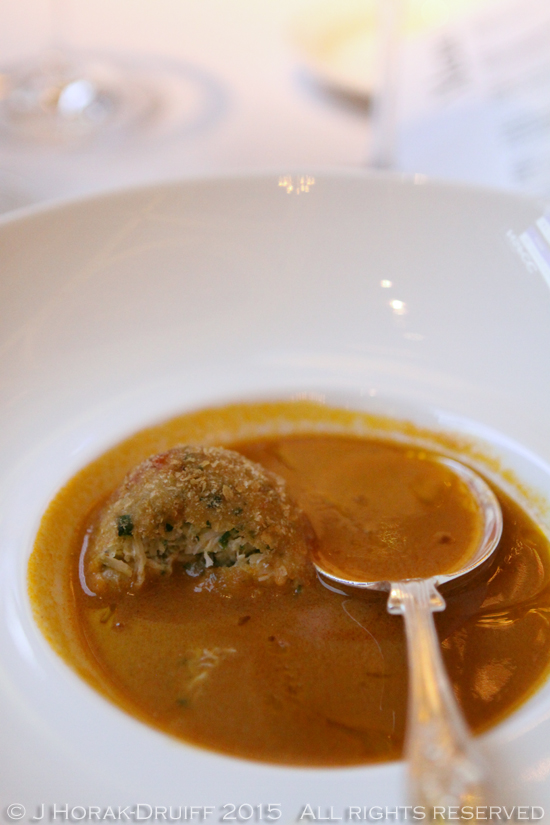 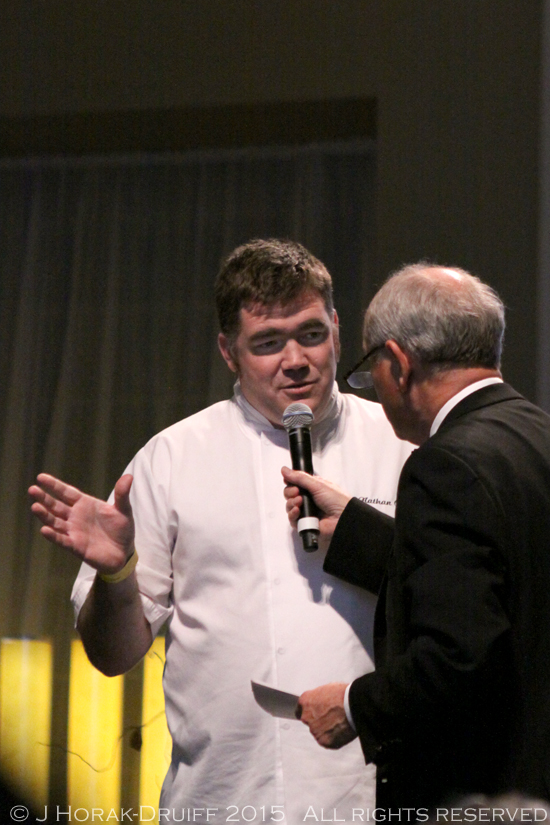 The main course was the brainchild of Mark Dodson, chef and owner of the one Michelin-starred Masons Arms in Devon.  This was an appropriately seasonal plate of breast of duck with blackcurrant jus.  The duck was tender and succulent and I particularly liked the accompaniments of carrot, beetroot, kale and little potato croquettes coated in crispy slivered almonds – inspired! This dish was paired with Cuvée Violette 2011, Clau de Nell – a rich and velvety blend of Cabernet Sauvignon and Cabernet Franc from the Loire. 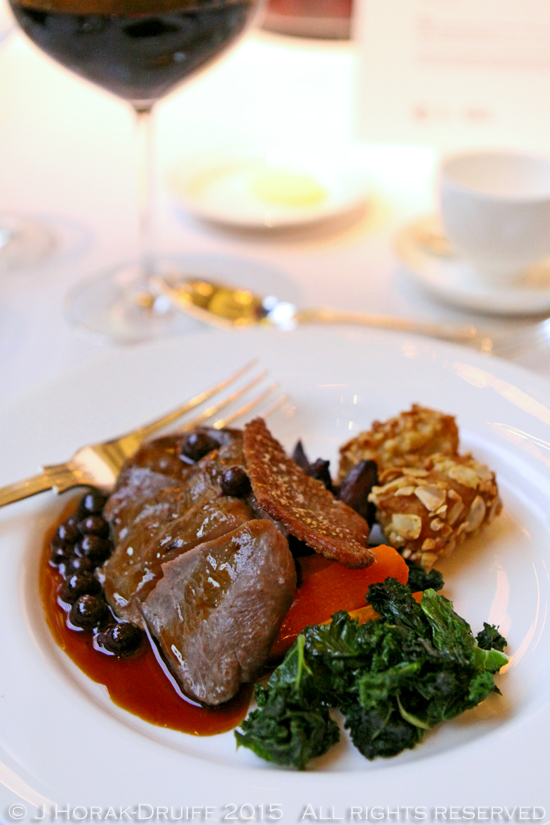 Last but not least came dessert, prepared by Frances Atkins of the Yorke Arms in Yorkshire, one of only six female Michelin-starred chefs in the UK. Frances spoiled us with a selection of four small desserts including a salted caramel & citrus delice, a spiced pomegranate slice; and two chocolate morsels, one of which was topped with an impressive shard of sugar glass. All were subtle and delicious, but the sated caramel and citrus delics probably got my vote to win 🙂  The desserts were paired with a glass of excellent Hungarian Tokaji Aszu 5 Puttonyos 2008, Château Dereszla – always a treat to drink. 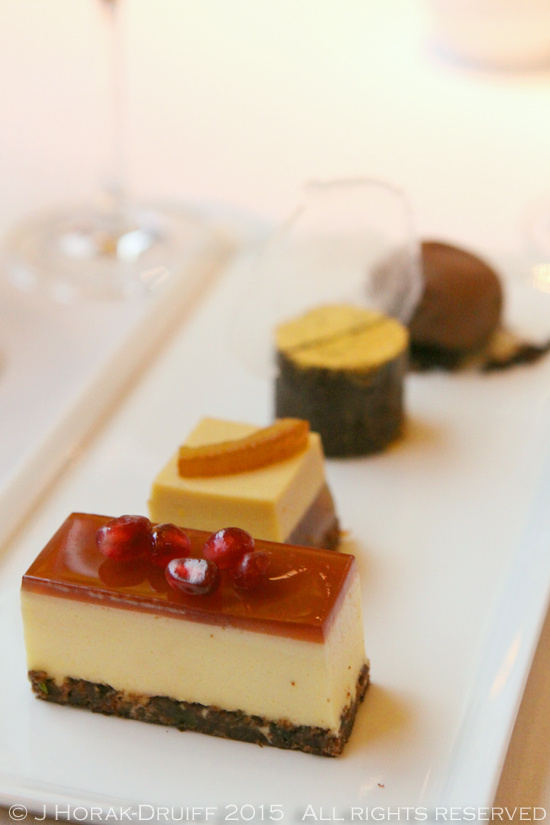 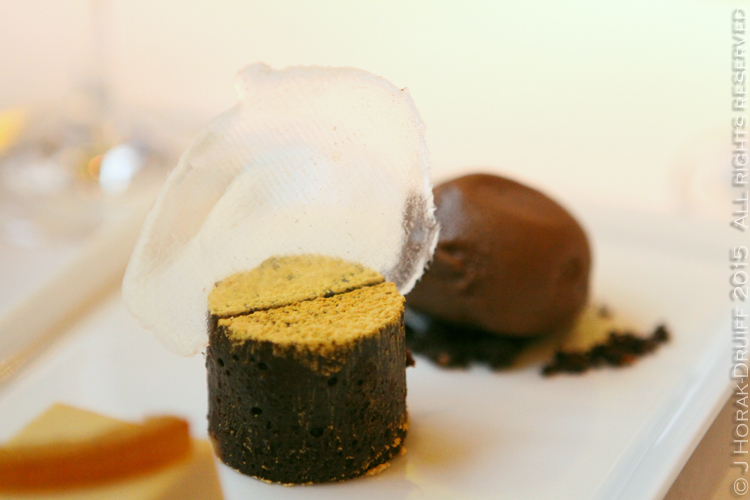 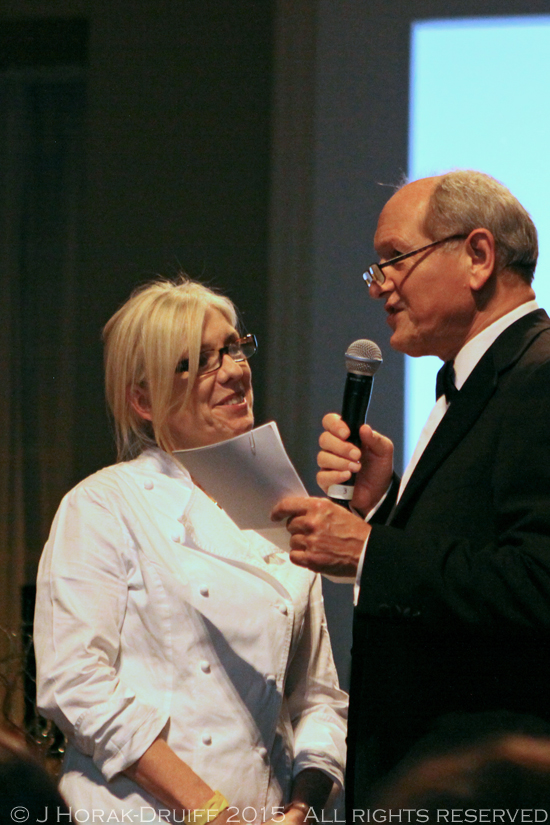 Between courses and after dinner there was both a silent online as well as a very-much-not-silent live auction in the Banqueting House, where various amazing prizes including restaurant meals and one-off experiences were auctioned off. By the end of the evening, an amazing £170,000 had been raised on behalf of the NSPCC with the money earmarked to support the ChildLine Schools Service.  Most children who contact ChildLine for information, help and support are over 11 years old and in many cases they have been suffering abuse for some time without realising it or being able to articulate it. The Schools Service enables the NSPCC to reach out to those younger children helping them to understand and recognise what is and isn’t normal behaviour.  Using school assemblies and smaller workshops, children are educated and given a language to articulate their concerns and offer help if they need it. The programme has allowed the NSPCC to visit more than 15,000 schools and reach over 1 million children.  Calls for help from children often peak over the festive season, making the sum raised so close to Christmas even more meaningful. 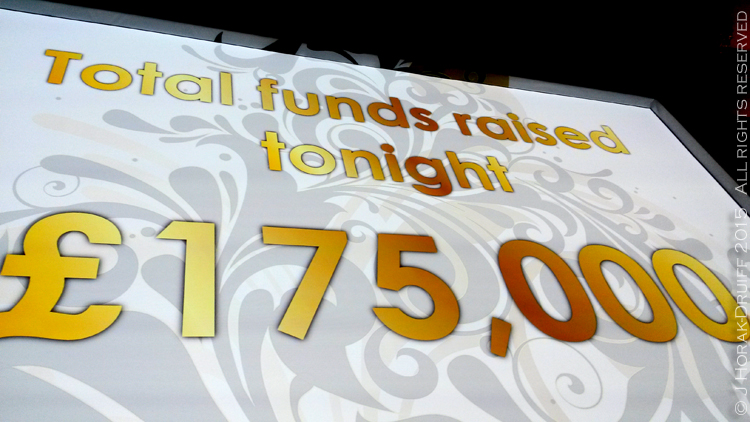 Should you or your company wish to take part in this year’s dinner, it will be taking place on Wednesday 02 December 2015 at The Guildhall, Gresham Street, London EC2V 7HH.  Tables of 10 can be purchased for £6,000 and guests can look forward to a four-course meal with wine, with each course created by one of the UK’s finest chefs. Guests will also have the chance to bid on some money-can’t-buy prizes in a live auction.  For further details, please see the NSPCC website.

DISCLOSURE:  I enjoyed this meal as a guest of Great British Chefs but received no further remuneration to write this post.  I was not expected to write a positive review – all views are my own and I retain full editorial control.