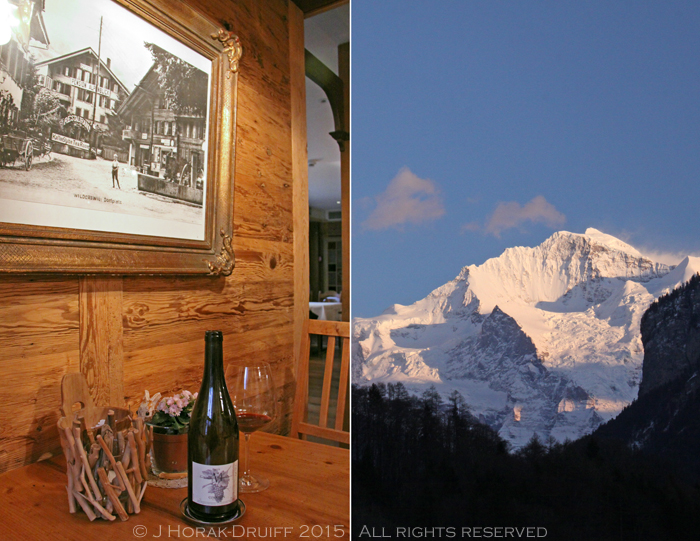 The Hotel Alpenblick is a handsome traditional Swiss building originally built in the 17th century and which has been operating as an inn since 1890.  In 1957 Adelheid Stöckli acquired the property and continued to run it as an inn until she handed control of the hotel to her son Richard in 1980.  It’s fair to say that Richard has hospitality in his blood, having grown up in the hotel before going travelling to hone his cheffing skills and then returning to take over the reins.  These days, visitors are welcomed by Richard and his wife Yvonne, both in the hotel and in the restaurant where Yvonne is known for her impressive wine-matching recommendations. With some rooms having been renovated in 2012, the hotel offers guests either a cosy and traditional Swiss room, or some more modern rooms in a more stylised Alpine chic style. The dining options also offer a choice: there is the gorgeous glassed-in terrace with its sheepskin throws and fluffy blankets in winter; the casual and more traditional Dorfstube where local Berner-Oberland specialities are served (as well as drinks with very impressive charcuterie platters); and the Gourmetstubli is the more formal dining area with white tablecloths and sparkly glassware.  It was the latter area that was awarded a Michelin star in 2010 and where Richard continues to serve up his world class menus focusing on local produce (he even keeps his own cows for cheese!).

When I visited, I came for drinks and ended up staying for dinner so rather than dining in the formal area, I opted to remain in the more casual Dorfstube – but the food was anything but casual.  Before the meal started I enjoyed some excellent bread with chive-spiked butter while ogling the wine menu.  As befits a Michelin-starred establishment, this arrives in a leather-bound tome as thick as the local phone directory.  So far, so standard Michelin.  But open the menu and you may be in for a surprise: of this massive tome, at least 80% of the wines are Swiss.  It seems that Swiss wines are some of the country’s best-kept secret and most never cross its borders but are jealously guarded by the Swiss.  As our aperitif, we had a bottle of 2008 Cornalin Denis Mercier (AOC Valais), an absolute corker of a wine with a big, bold nose of red berries and a rich juicy palate of redcurrants that belied its age. 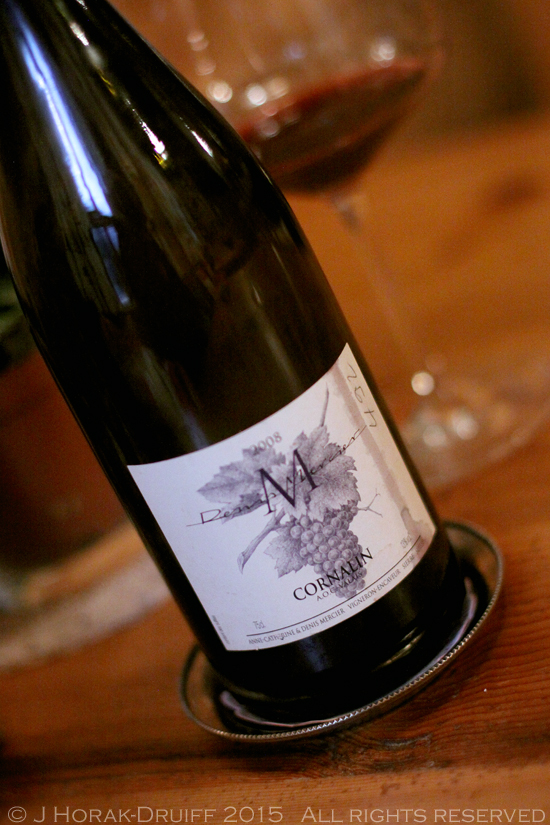 But to match the amuse bouche and the next few courses, Richard chose something lighter in the form of a 2010 Simon Maye & Fils Chamoson Paien (AOC Valais) made from an Alpine grape called Savagnin Blanc (not to be confused with Sauvignon Blanc).   This was an astonishingly good wine with an amazing gold colour. Although there is a bit of wood evident on the nose, the initial impression is definitely that of a fruit salad, leading to a rich fruity palate of quince – mouth-filling but retaining a fresh acidity and with an exceptionally long finish.  And so to the amuse bouche: white asparagus with caviar creme and egg, meticulously plated morsels of food packed with subtle flavours which set the scene for what was to follow.  Up next came one of the best things I have eaten in years. Described as cappucino of potato cream with truffle and barley,  this came in a little earthenware tumbler which did indeed contain something that tasted like a potato cappuccino – like the essence of the best potato you ever had, whipped into a froth.  It was topped with generous amounts of grated local truffle – so far so fab.  But the star of the show was hiding in the base of the tumbler: a veal stock reduced to a syrupy consistency together with some port and studded with teensy grains of barley. The reduction was at once earthy, sticky, sweet and salty; given texture by the barley; and balanced by the mildly-flavoured foam.  The dish as a whole was an exercise in balance and playfulness, and I was smitten. 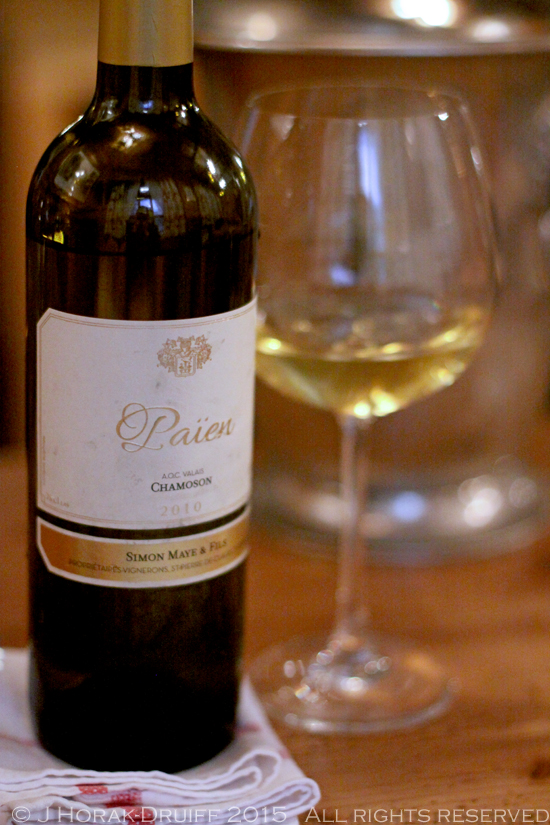 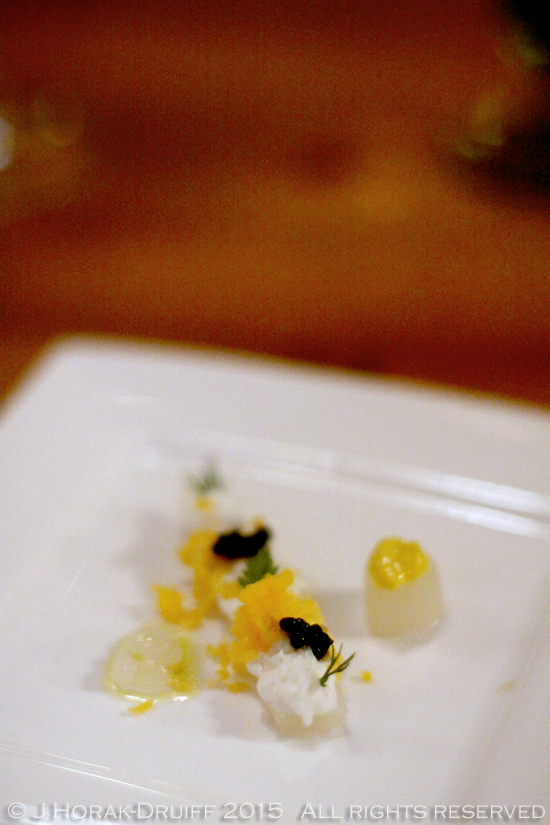 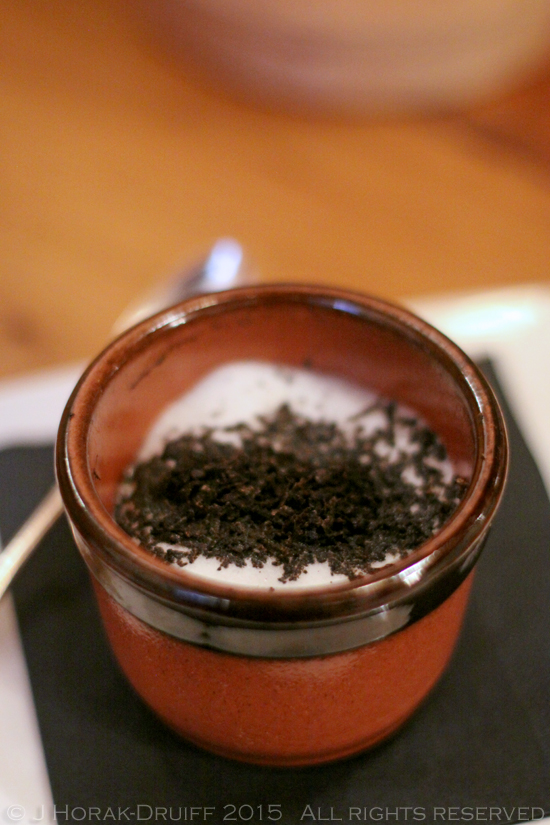 The next dish definitely won the beauty prize hands down: a layered terrine of foie gras and pea mousse, together with peas, pea puree, pretty pea shoots and a rhubarb gel. There was absolutely nothing about this dish not to like. Not only were the colours playful and pretty, but the fresh, bright flavour of the pea mousse; the umami kick of the peas (cooked with garlic?) and the slightly tart rhubarb gel were a great match for the rich liver – like a plate of Spring. And the seasonal theme continued in the next dish which consisted of a tumbler of Bergkaese (mountain cheese) soup with spargeln (white asparagus), morel mushrooms and a crispy shard of speck.  The rich, creamy soup made a great foil for the more subtle flavours of the asparagus and earthiness of the morels – imagine a rich but fabulous cheese latte and you would not be far off. And what soup is not improved by the addition of crispy bacon? 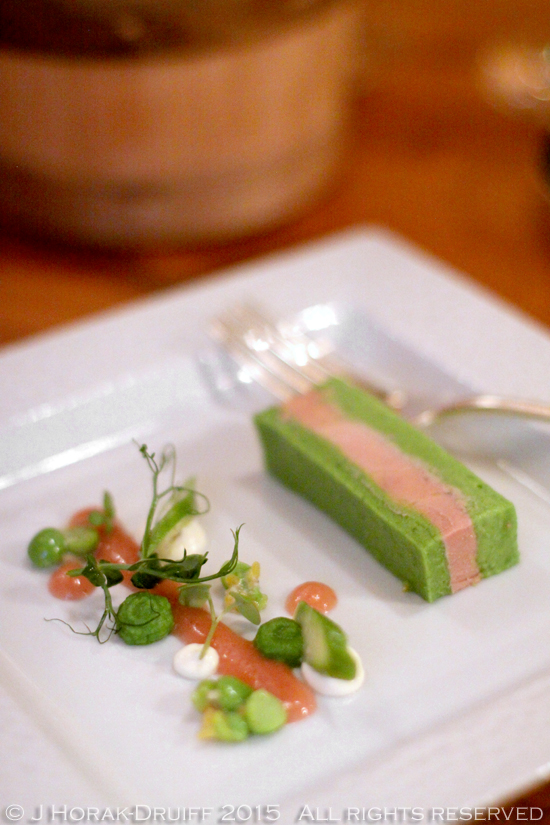 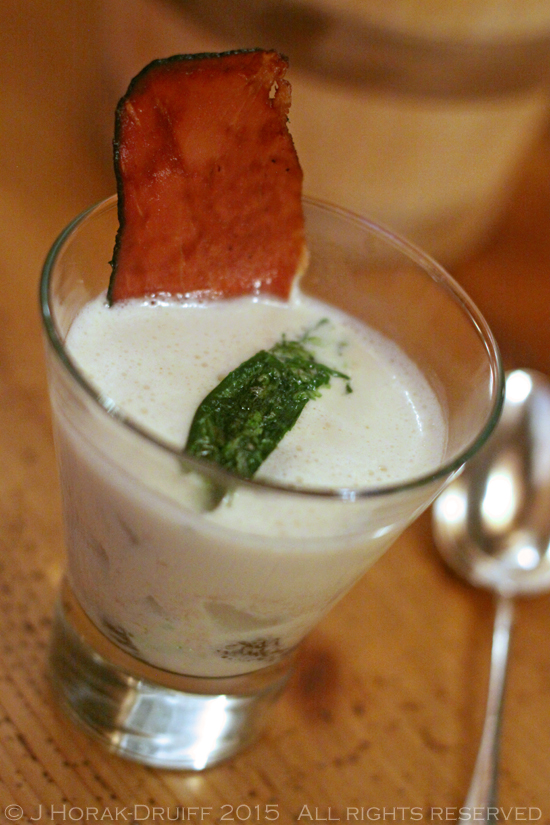 The next course was a fish course – saibling is a popular Swiss freshwater fish related to the salmon family and sometimes called mountain trout and this particular dish Richard had prepared the saibling with a little square of quinoa, endive and buerre blanc sauce.  The pink-fleshed fish was beautifully cooked – just done to the point of flakiness but still holding together, and it was draped in a sliver of its own skin like an exotic edible pashmina – and I loved the nutty texture and flavour of the quinoa.  The meat course was another seasonal treat in the form of kid goat, which is apparently an Easter speciality in the region. The goat had been prepared three ways: medallions of saddle wrapped in bacon; a slice of liver; and a rissole, served with an onion puree, gravy with tarragon, potato gnocchi, and  broad beans. Mortifylingly (for a food blogger, in any case!) I had never tried goat before, not because of any objection in principle but purely because I had somehow never been to a restaurant where it is sold, and our local supermarkets do not stock it. All I had heard was that it can be quite tough and that the flavour can be quite gamey. I am happy to report that nothing on this plate was tough (although I will say that the saddle tasted “barnyard-y”, rather like a goatshed smells).  My favourite was probably the rissole and I thought the addition of tarragon to the gravy was inspired. To match this final dish, Richard selected a different red wine: Tornala 2009, a red blend (Cabernet Sauvignon, Merlot, Syrah) from La Tornale winery in the Chamoson region.  This was a huge wine with a spicy blackberry nose and a lush palate of black pepper and ripe, dark berries with a long and majestic finish – just wonderful. 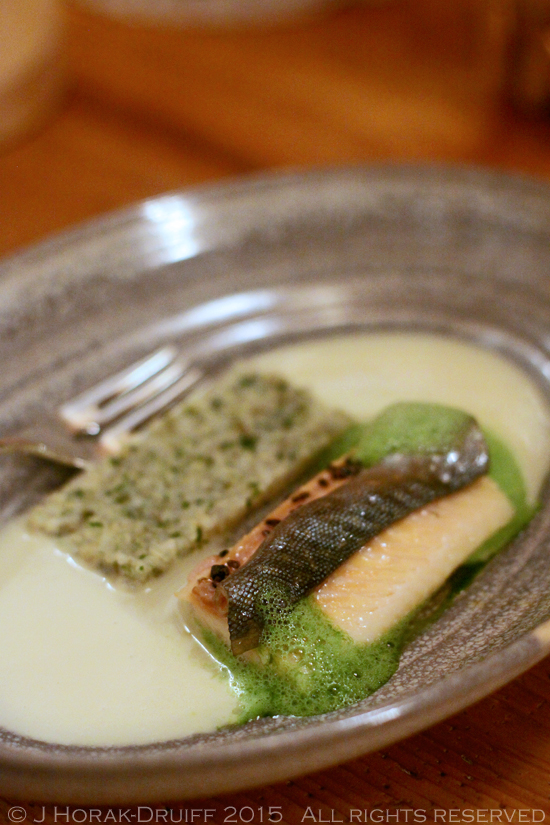 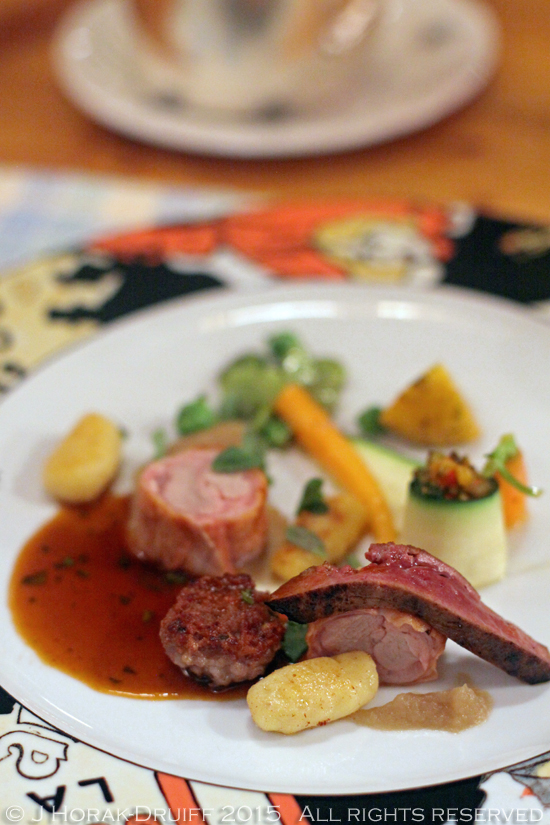 Dessert once again followed a seasonal theme and arrived looking like an edible Kandinsky painting: chocolate sorbet, poached rhubarb,strawberry sorbet, diced strawberries macerated with lemon thyme and an impressive crisp circle made of a thin slice of dehydrated rhubarb.  There was nothing I did not like about this, from the pretty plating to the varied textures to the wonderfully tart flavours.  It was also not too heavy, which is often a problem with dessert after a multi-course tasting menu. To match dessert, Richard chose a bottle of Swiss dessert wine: Marie-Thérèse Chappaz Petite Arvine Grain Doux, made from the Swiss Petit Arvine grape in the Fully region. Its balanced flavours of apricots and honey worked well both with the dessert and the petit fours that followed. And of course, this being Switzerland, we weren’t allowed to leave before we had sampled a local digestif: Eigerwasser.  Made in a family-run distillery in Gsteigwiler in the shadow of the Eiger, this delicious schnapps is made in old-fashioned pot stills with local fruit – we tried the plum, but cherry and pear are also available.  There is also a decadent cheese trolley, but I couldn’t possibly have eaten anything else after this feast. 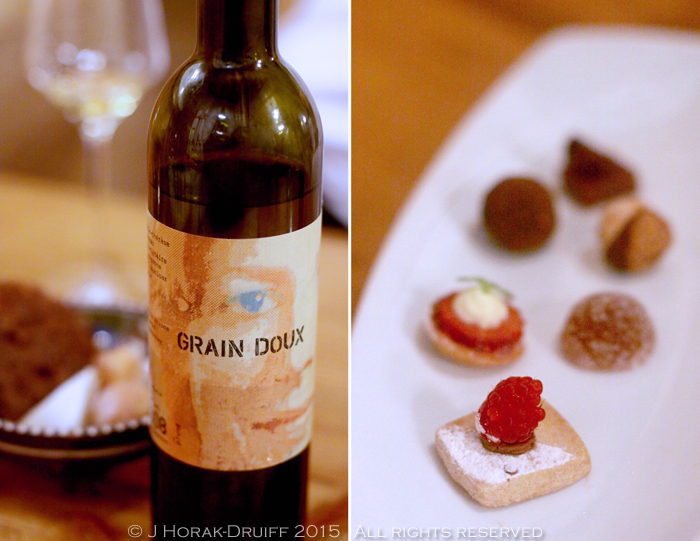 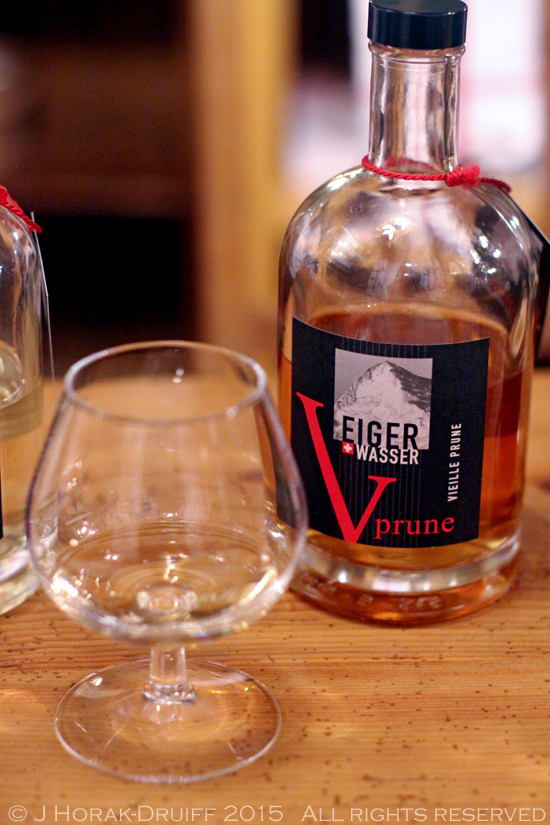 I have to say this this meal took me totally by surprise. Wilderswil is not, shall we say, hugely cosmopolitan but this meal would not have seemed out of place in any major European capital city. Both Richard and Yvonne travel widely and this shows in the menu, which is well thought-out and beautifully presented. Of course, even in the wilds of Wilderswil, Michelin-starred dining does not come cheap, but you can choose how many courses you want and pay accordingly: 3 courses (CHF 105), 4 courses (CHF 120), 5 courses (CHF 140), 6 courses (CHF 160), 7 courses (CHF 180) or 8 courses (CHF 195).  The personable Richard himself is in the kitchen most nights and often makes a tour of the dining room at some point in the evening, which makes a change from celebrity chefs who spread themselves too thinly and never cook in their own kitchens any more. WIlderswil is a 10 minute bus or train ride from Interlaken, so if you are visiting the are, do make the trip out to Alpenblick and prepare to be as amazed as I was.

DISCLOSURE: I enjoyed this meal as a guest of the restaurant but received no further remuneration to write this post. I was not required to write a positive review and all opinions are my own.

If you enjoyed this post, you may like some of my other reviews of Michelin-starred restaurants including: