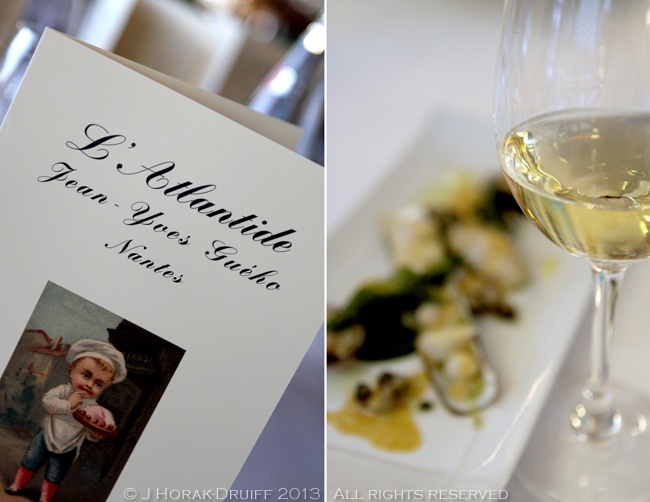 “Permettez-moi de vous verser un verre de vin?“, said the charming mustachioed French gentleman standing in front of me. If I had applied brain for a few seconds longer, I would have caught the “verre de vin” bit and would probably have been able to guess the rest and responded appropriately by holding out my glass with a smile. But I was so distracted by his astonishing set of whiskers that all I managed to stammer was “Je ne parlez pas Francais…” and thus seal my reputation as least cool person on the trip. But come on – look at those wonderful whiskers – wouldn’t you have been distracted?

We were standing on the balcony of L’Atlantide restaurant in Nantes, overlooking the Loire,  on the first night of a weekend trip to reintroduce us to Muscadet wines.  Muscadet is one of those appellations that enjoyed huge popularity in the UK market in its heyday but which has steadily lost market share to cheaper fresh New World whites.  In part, it suffers somewhat from a lack of diversification – only one grape goes into every bottle of Muscadet wine you have ever encountered – and so people tend to pigeonhole it as only being young, zesty and good with oysters. But as we were to find out at this introductory dinner, there is potentially more to Muscadet than meets the eye.

There to talk us through some of the wines were Muscadet winemakers Jo Landron  of Domaines Landron (and owner of the impressive whiskers!) and  Jean-Luc Ollivier of Domaine de la Grenaudière. Jo Landron learnt winemaking from his father who acquired the Landron vineyards  in 1945.  According to Jo: “Muscadet should be the true expression of terroir reflected in the minerality of the wine”, and the estate has been biodynamic since 2006.  Domaine de la Grenaudière, on the other hand, consists of 30 hectares, handed down from father to son since the 17th century, currently in the hands of Jean-Luc and his brother.  As a result of the character of their land and the natural acidity of their wines, old vintages are the estate’s speciality.  Their low yields, old vines, manual harvest, use of natural yeast, and extended fermentation mean that the wines mature slowly.  “People assume muscadet is young and fresh but bottle age makes it quite different”, says Jean-Luc. To prove his point we started with a 1982 Muscadet de Serve et Maine from Domaine de la Grenaudière which was, frankly, astonishing considering that it is a 31-year old unwooded white. The wine had a beautiful clear gold colour and a nose with hints of vanilla and the faintly keroseney notes of an aged Riesling.  The palate showed no signs of bottle age and still had some racy acids befitting a far younger wine, but balanced out by a glorious butterscotch finish.  Unexpectedly wonderful. The 1978 Muscadet de Serve et Maine from Domaine de la Grenaudière was equally surprising but with a very different nose (the slightly cheesy, barnyard smell I associate with older European wines) and if anything, even more structure than the 1982 wine but still balanced out by a full, rich round flavour and very long finish. 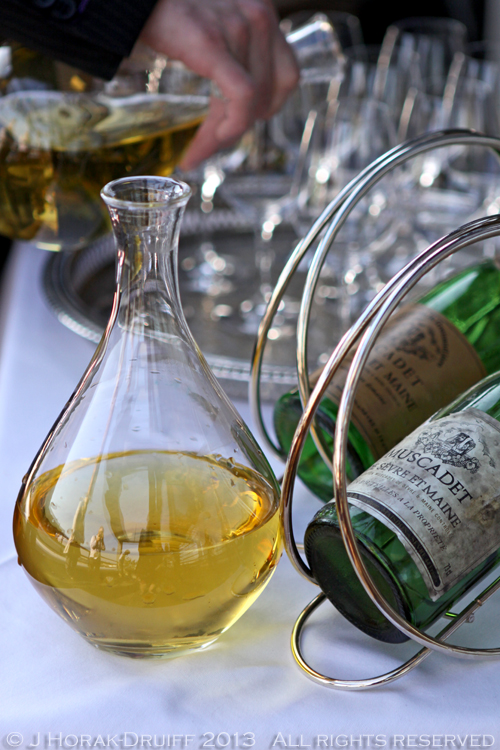 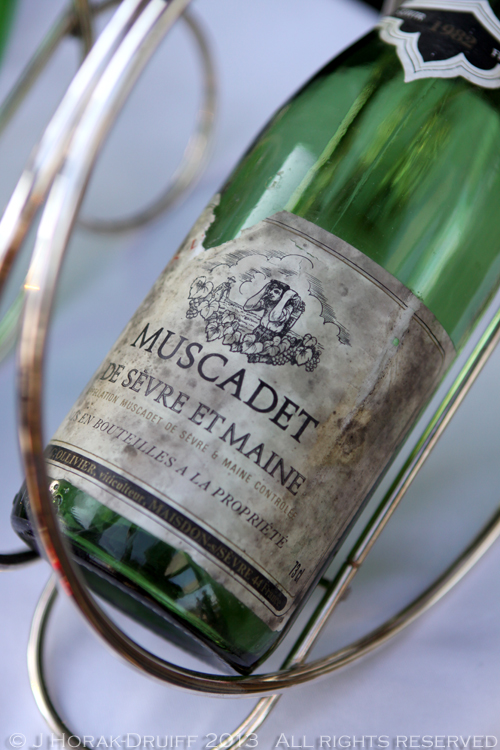 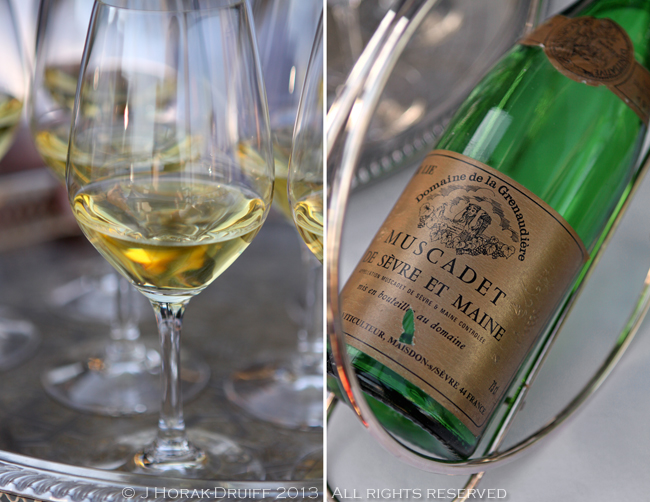 But of course, we were not there for the wine alone – L’Atlantide is a Michelin-starred restaurant and I was eager to see what the kitchen could produce. Chef Jean-Yves Guého comes from a village in Brittany where his aunt Marie-Therese had a small roadside restaurant – which is where young Jean-Yves liked to go help in the kitchen. After working at several top restaurants in France he joined and cooked for Le Meridien hotels around the world and earned his first Michelin star at Le Montparnasse 25 in the Le Meridien Montparnasse.  When his desire to start his own restaurant became too strong, Jean-Yves came to settle in Nantes and opened L’Atlantide which gained a Michelin star in 1999. And with Muscadet being widely regarded as a food wine, well matched to cheese, lobster, foie gras, white meat, paté and veal, I was keen to try some with food.

We started with foie gras poached in Muscadet with green vegetables which left me wondering why everybody does not poach their foie gras in wine.  The flavour of the wine had subtly infused into every bite of the creamy liver, making for a heavenly (and far too small!) dish. The other pre-starter was spider crab with cucumber and lettuce cream – a wonderfully subtle and beautifully plated dish. The wine chosen to pair with these two dishes was the Muscadet “Le Fief du Breil”, Domaine De la Louvetrie – 2010 (made by Jo Landron).  This big wine (14% alcohol!) had a delightful nose of pears and a palate of zesty green fruit (Granny Smith, Green Williams) and a lovely fresh acidity.  I found this to be better matched by the lighter spider crab dish rather than the foie gras dish, where there were too many competing flavours. The next course consisted of Croisic langoustines with crisp turnips and emulsions of honey, sherry vinegar and rosemary.  This was definitely the prettiest dish of the evening, with the emulsions adorning the rim of the plate like sparkling jewels. The creamy langoustine was nicely offset by the teensy wafer-thin rounds of turnip, and the punchy flavours of the emulsions added flavour to each mouthful. Paired with this, we had a Muscadet Granite de Clisson 2009 (made by Bruno Cormerais) which was  – more apply than peary on the nose and richer and rounder on the palate with a long finish.  It was another good match with the food, which brought out an intriguing sweet fruitiness in the wine. 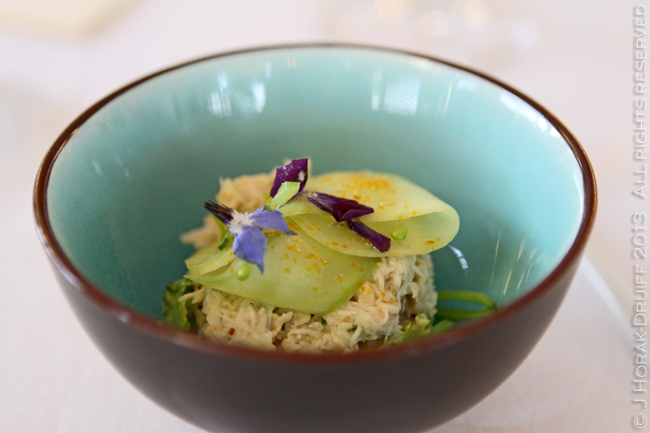 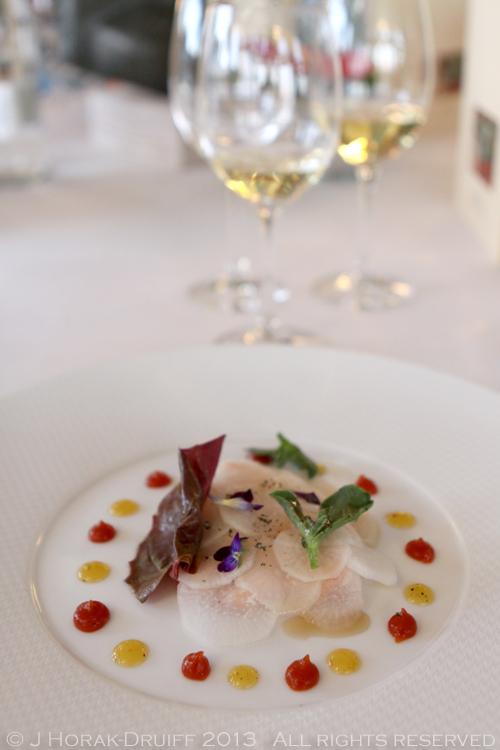 The next course consisted of local shellfish with coriander jelly and emulsion of sea urchin. The plating was once again gorgeous, resembling shellfish casually washed up on a beach by the tide, amidst foam and seaweed.  The shellfish included the little sea snails (bulots) that are so popular in Brittany, cockles, the fattest mussel I have ever seen, and (to my delight) a razor clam! The coriander jelly (the vibrant green disc visible in the photo) packed a punch of herby flavour, but it was the sea urchin emulsion that impressed me the most, packed with umami without the, erm, challenging texture that the flesh is said to have.  The wine match for this course was the Muscadet Côtes de Grandlieu sur lie “Les Granges, Les Hautes Noëlles” 2010 (made by Serge  Batard).  On the nose were notes of apple fizz pops (a sweet from my childhood) and lemon sherbet; and it had was a fresh zesty palate with notes of lime.  With the food, the wine lost some of its acidity and showed more candied peel notes – a very good match.  Our final savoury course was fish: dos de bar roussi (bass of some sort?) with butter, Noirmoutier potatoes and wild fennel jus. This simple dish relied entirely on the quality of its inngredients: just-opaque flakes of creamy fish, nutty little potatoes and the mild aniseed tang of the wild fennel – gorgeous simplicity.  The wine match here was Muscadet Vielles Vignes Chateau Chasseloir “Comte Leloup” 2000 (made by B. Chereau) which was made from 100 year old vines and had a buttery nose with a rich, rounded, balanced palate. To me, this was the best match of the night as the food seemed to bring out minerally, smoky notes in the wine to balance its richness. Superb. 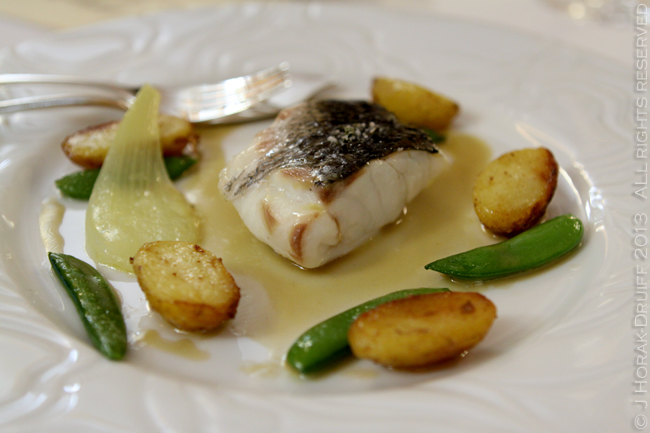 A pre-dessert which I neglected to photograph (mea culpa!) arrived in the form of slices of Saturn peaches, booze-soaked slices of cake and a vanilla cream (very good), and was rapidly followed by the dessert: strawberry “Opaline” with fresh strawberries, strawberry sorbet, rhubarb compote and verbena ice-cream.  Apart from being as pretty as a picture, this was also a deliciously light end to the meal, with the tang of the rhubarb and the verbena balancing the sweet, ripe strawberries.  To match with the dessert courses we had some bubbles – Domaine de l’Ecu Cuvée Ludwig Hahn NV Brut (made by Guy Bossard – a sparkling Muscadet made according to the traditional Champagne method).  This had a complex nose with briny, almost smoky hints and a bracingly dry palate with a fine mousse.  It was a wonderful palate cleanser between bites of the sweet fruity desserts. And as a final extravagance over coffee, we were served a pretty lacquered red tray of assorted mignardises which included spheres of red fruit jelly topped with gold leaf; little gingerbread spice cookies with caramel cream; strawberry macarons; and my personal favourite of mini passion fruit ice-cream lollipops coated in creamy milk chocolate – like mini Magnums for grown-ups! 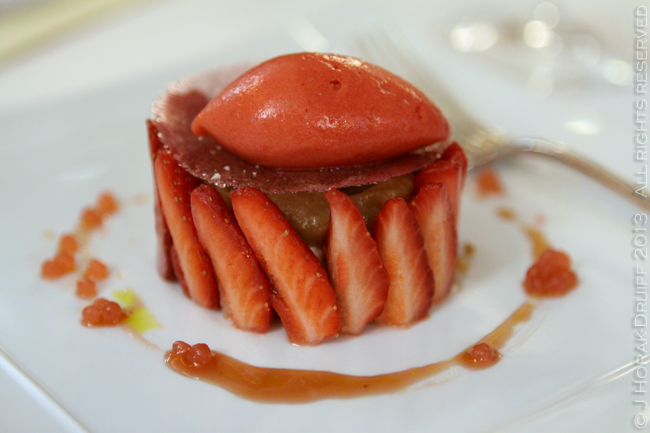 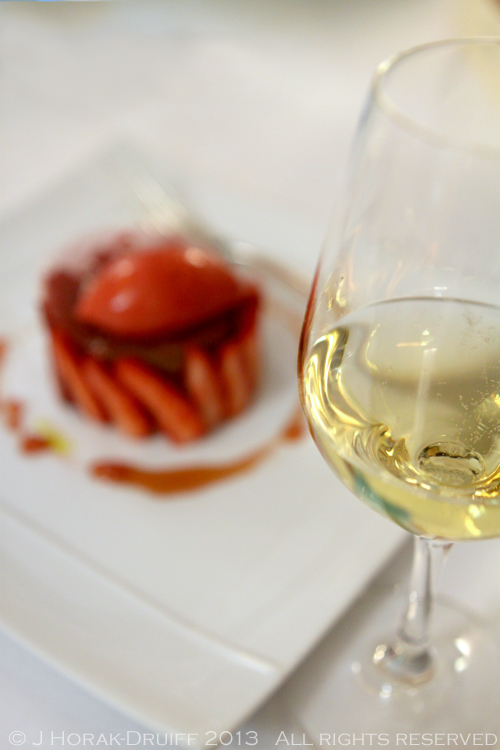 We could not have asked for a better introduction (or reintroduction!) to the Muscadet appellation.  Apart from the charm, gentle humour and obvious passion of the winemakers, the setting was glorious (there is very little that beats standing on a terrace beside the Loire on a sunny evening sipping wine!) and the food was outstanding, both in terms of presentation and flavours. L’Atlantide also offers excellent value 4-course lunches plus mignardises for €38 (€48 for dinner) or the full experience epicurean tasting menu of 9 courses plus mignardises for €98.

DISCLOSURE:  I enjoyed this meal as part of a trip to the Muscadet region organised and paid for by Vins de Loire but I received no remuneration to write this post and all opinions are my own.