I have said this before and I am proud to say it again:  I am a child of the Eighties. This has its advantages – for a start, I learnt maths and grammar the proper old-school way so that today I am still able to tell you what 9 times 7 is without using a calculator; or identify a dangling participle; or know when to use loathe versus loath in a sentence. I also fondly remember the days of mixtapes painstakingly recorder from the radio and firmly believe that nobody born in the digital age will ever fully appreciate the miracle of music on demand, digital playlists and the endless availability of random single tracks rather than whole albums. And of course, I am grateful to remember an age when a band was a bunch of school friends who wrote angsty teenage songs; played their second-hand instruments badly in their parents’ garage; and gigged at dodgy venues all over town fro practically no money before finally being spotted by a talent scout and offered a recording contract, rather than being telegenic youngsters who won a reality TV show. But of course being a child of the Eighties also has its downsides: neon legwarmers, shoulder pads in everything, big hair, blue eyeshadow, fingerless gloves – and that was just the boys! It also  means that during my brief period of studying geography at school, most of Eastern Europe was simply marked “USSR” on maps – a behemoth of a country that had swallowed up dozens of smaller formerly independent countries that have reappeared on maps after the fall of communism. But sadly, by the time they had reappeared, my geography-study days were long past, and if you were to have asked me to pinpoint Serbia on a map last month, the result would probably have been somewhat embarrassing.

Embarrassingly scant geographical knowledge notwithstanding, last month found myself aboard an Air Serbia plane bound for Belgrade, Serbia’s capital, for a short culinary visit. Serbia, as it turns out, is a landlocked country on the Balkan peninsula, surrounded by Croatia, Bosnia Herzegovina, Montenegro, Albania, Macedonia, Bulgaria, Romania and Hungary, which reads rather like an honour roll of Eurovision entrants.  Belgrade is an interesting place – one of Europe’s oldest cities and historically of great strategic significance, situated as it is at the confluence of the Sava and Danube rivers, and at the intersection of routes to both Eastern and Western Europe. This rich history overlaid with the architectural hangover of Soviet occupation makes for an interesting combination – but we were there for only a few hours and our destination was the recently-opened Dukley City Lounge.

Although it has only been open for a few months, it is easy to see why Dukley is becoming one of Belgrade’s favourite hotspots.  Designed with the after-work crowd in mind, the venue aims to be a home from home – a plush cigar and3 whisky bar with the dark and moody ambience of a jazz club (there is live music on some nights) and squishy leather sofas, plus a restaurant upstairs serving a dazzling array of internationally-inspired dishes.  It is envisaged that people will come for drinks after work, have a meal and then retire to the lounge downstairs for whisky and a cigar.  But it wasn’t cigars that we were here to sample: the kitchen is in the capable hands of Nemanja Jankovic who is apparently Serbia’s youngest winner of Masterchef and we were expecting great things.  Suffice to say we were not disappointed! 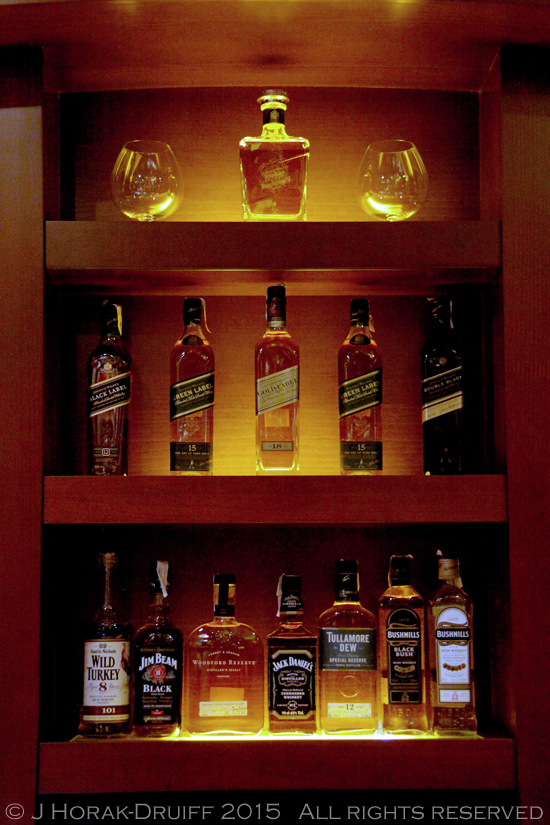 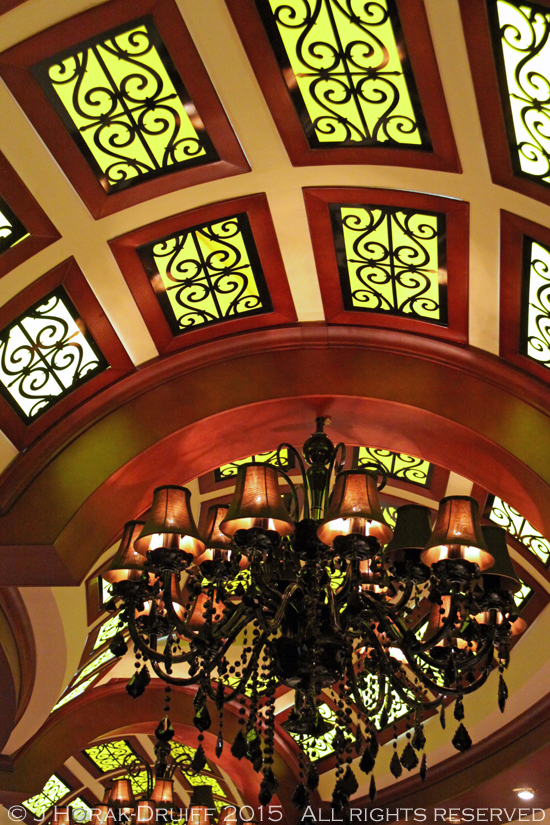 If you are looking for a selection of traditional Serbian dishes though, prepare to be disappointed – the menu meanders amicably all over Western Europe like a greatest hits of modern European cuisine, with not a Serbian stew or dumpling in sight.  This is no bad thing – you would have to be seriously picky not to find something to your liking here. While we were looking at the a la carte menu, we were served a signature cocktail made of beer, elderflower syrup, vodka and lime – an unlikely sounding combination that actually proved to be refreshing and lovely.  This was served alongside a bit of endearingly silly table theatre: a mason jar filled with a dangerous-looking green aromatic herb infusion, made to bubble and smoke like a witch’s cauldron by the addition of dry ice. We were quickly reassured that it was not for drinking but merely for inhaling the herby aromas, and of course to look at! While all this was going on, warm fresh breadrolls were served together with one of the nicest flavoured butters I have ever tasted:  a heavenly combination of  basil, garlic and smoky paprika. 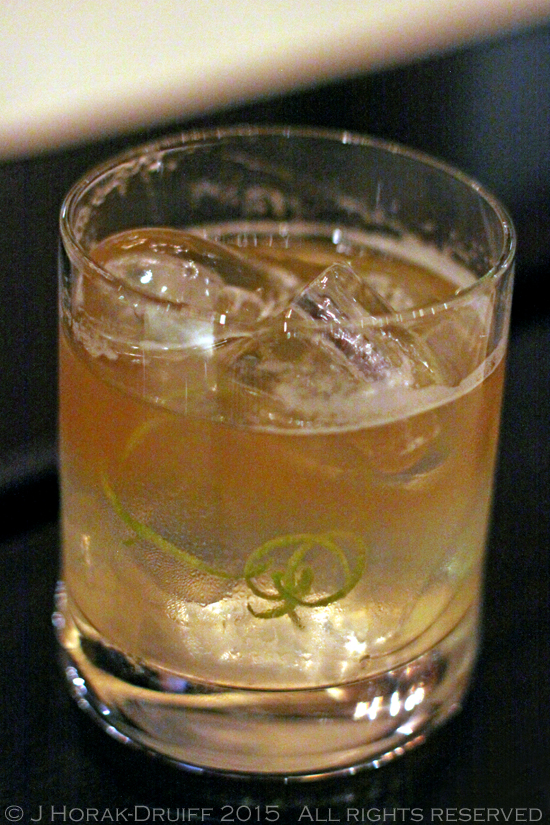 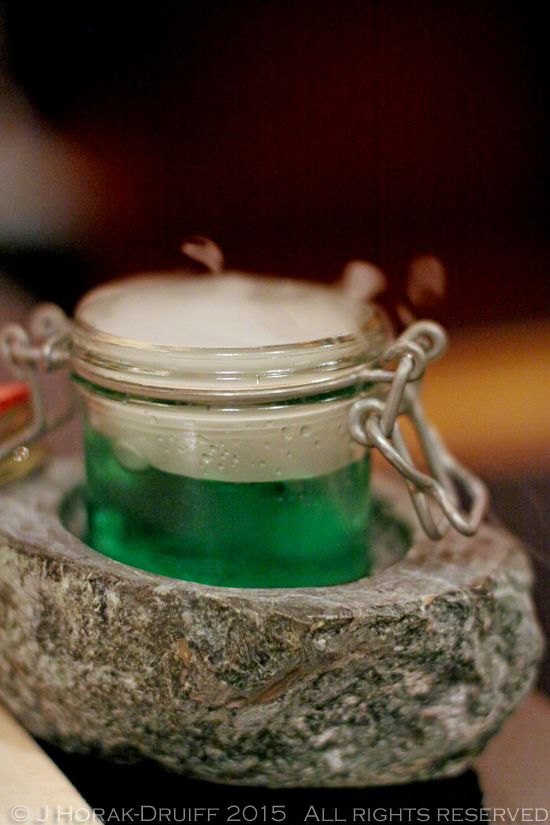 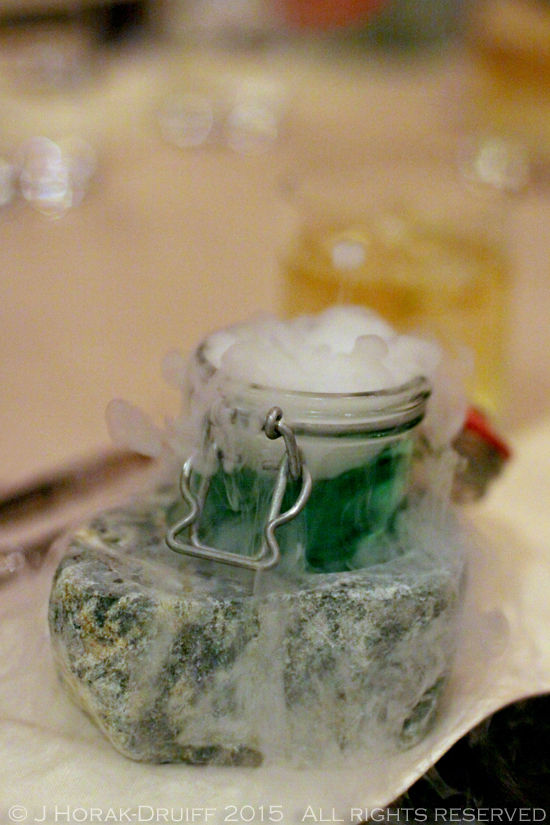 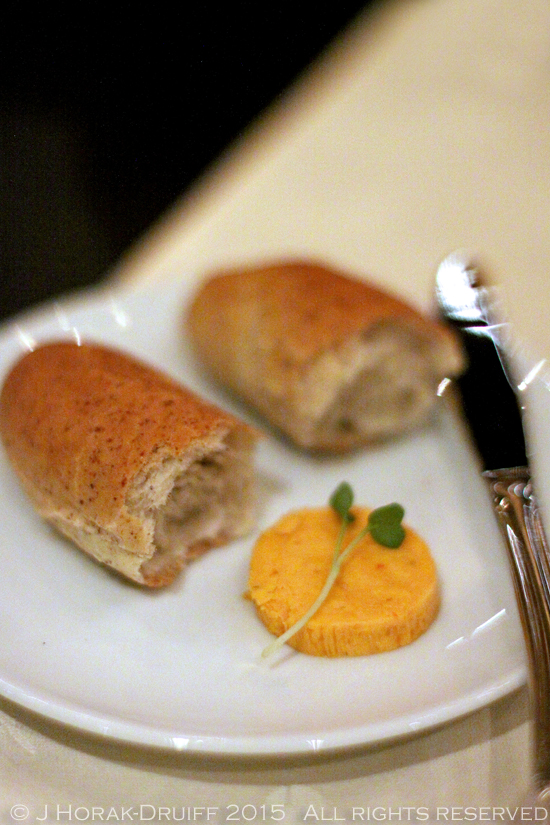 Rather than ordering for ourselves the manager, former chef Dragan, had decided that we should enjoy a series of the greatest hits off the menu, which started with a dish called  “Best for the start”:  an antipasti platter including local cured ham and salami; marinated goat’s cheese; and tomato, basil and Parmesan bruschetta (£5.86).  This was lovely, like an Italian antipasti platter with a twist.  The salty goat’s cheese served in its own little Kilner jar was a particular favourite for me.  The next dish was generally voted by all at the table to be one of the highlights of the evening: tuna tartare with sesame, orange, oyster sauce and dill emulsion (£9.41).  The contrasting flavours of nutty sesame, zesty orange and umami-rich oyster sauce made fabulous partners for the perfectly pink fatty tuna, the creamy avocado and the pickled cucumber slivers. A winner of a dish. 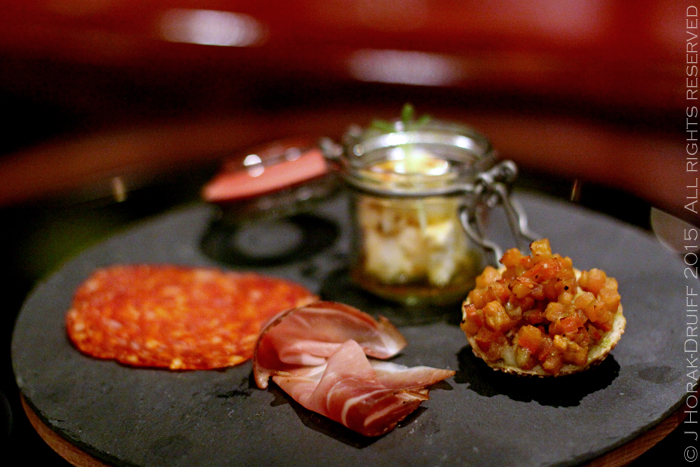 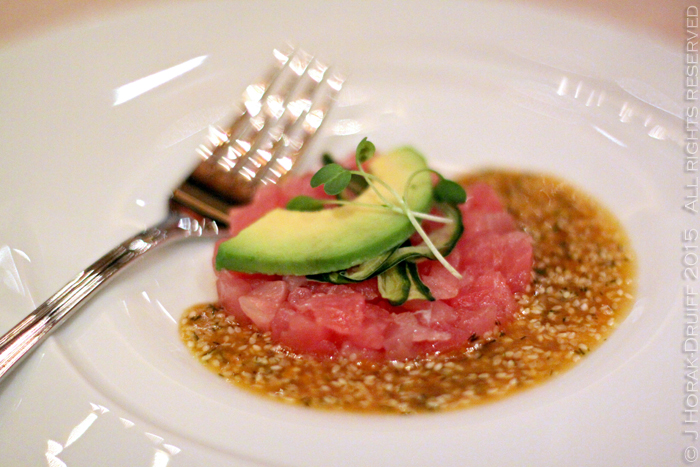 The following course was definitely the most decadent on the menu, and also our host Dragan’s favourite:  baked Camembert in a hazelnut and pepper crust, with a cranberry and sage jam (£5.27).  I just loved how this was served, under a cloche filled with smoke to impart a smoky flavour to the cheese (and to provided some table theatre for us!).  When the plates arrived, all you could see was the vague outline of an object through the smoke, but as soon as the cloches were lifted, wafts of aromatic smoke filled the room and drifted away to reveal a substantial whole Camembert cheese, coated in a moreish crispy crust of pepper and crushed toasted nuts. Inside the cheese was gooey and delicious – a very rich but delicious treat that worked very well with the cranberry and sage jam. The next dish was also an exercise in comfort food: pumpkin risotto with shallot chutney, sage chips and shards of crispy Prosciutto  (£5.27).  Once again, I loved the presentation of this dish in a skillet on a wooden board, and the portion was generous.  I loved all the flavours in the dish too, particularly the contrast between the sweet butternut, the salty Prosciutto and the slightly bitter sage leaves. All I might say is that this was more of an Autumnal dish and not necessarily something I’d expect on a menu in Spring. 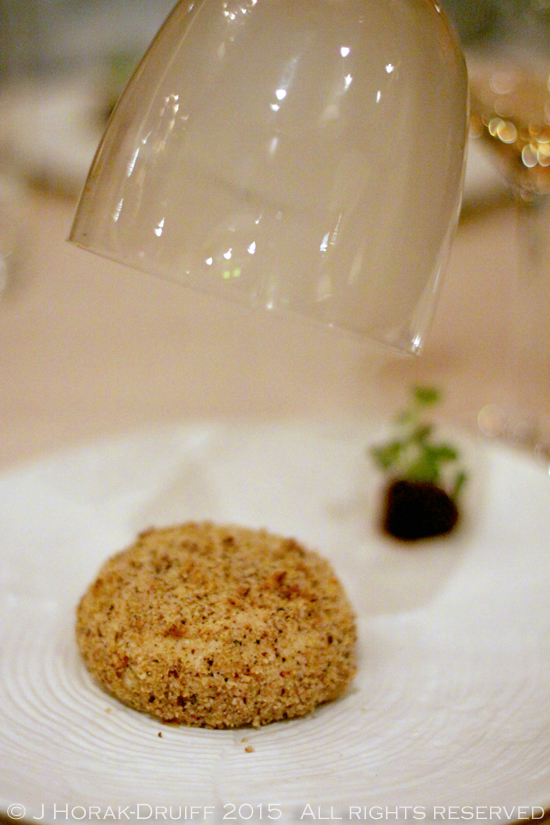 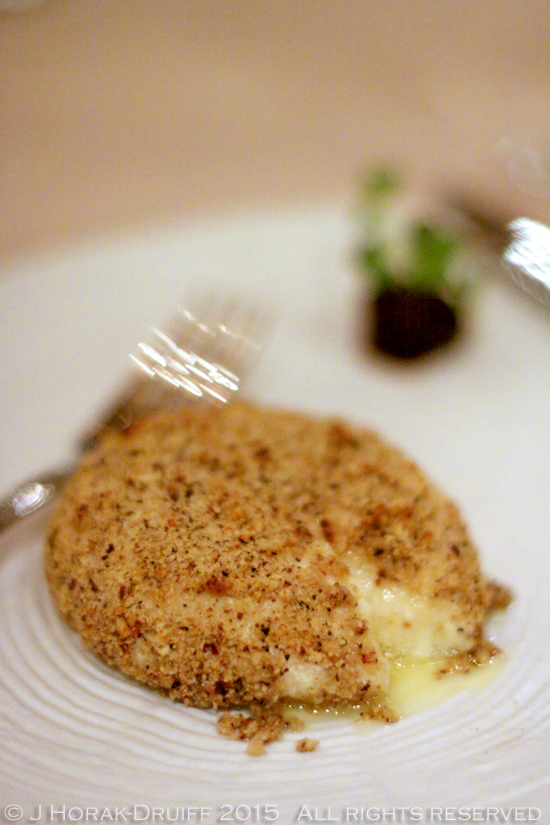 After two relatively rich dishes, the next two were lighter.  First up was shrimp-filled seabass fillet with lemon and dill Hollandaise sauce and glazed vegetables (£9.41).  This was beautifully plated and a wonderful dish for Spring, pairing crispy vegetables with a fish fillet neatly rolled around a filling of shrimps and dotted with good Hollandaise sauce. The following dish was another hot favourite around the table: duck breasts on sweet potato puree with asparagus; a Bermet (local dessert wine)  and orange sauce; and a dot of cumin and chammomile emulsion (£10.00). The duck breasts had been cooked sous vide and retained a pink, juicy plumpness that is so hard to achieve with other cooking methods.  The asparagus remained pleasantly al dente, and the sweet potato and the orange sauce provided a good foil for the slightly spicy duck meat. Having reached the end of the savoury courses, our final two courses were desserts.  First up was a deliciously light one: a little bowl of chamomile velvet panna cotta topped with a lemon balm sauce (£1.42).  This was soothing, creamy and mercifully neither too rich nor sweet, and we loved the pale green colour of the lemon balm sauce.  The other dessert was a little more decadent.  Called “Jaffa rendezvous”, it sought roughly to recreate the flavours of a Jaffa cake – but in a Kilner jar.  The base consisted of crispy ground hazelnuts, topped with a feather-light chocolate and orange cream and finally an orange, Amaretto and cinnamon gel. I loved all the elements of this – the textures as well as the chocolate-orange flavours – and particularly the mousse, which I would guess from its texture contained only eggs and chocolate, just like my mom used to make (£1.72). And of course, we could not be allowed to leave without a little digestif! 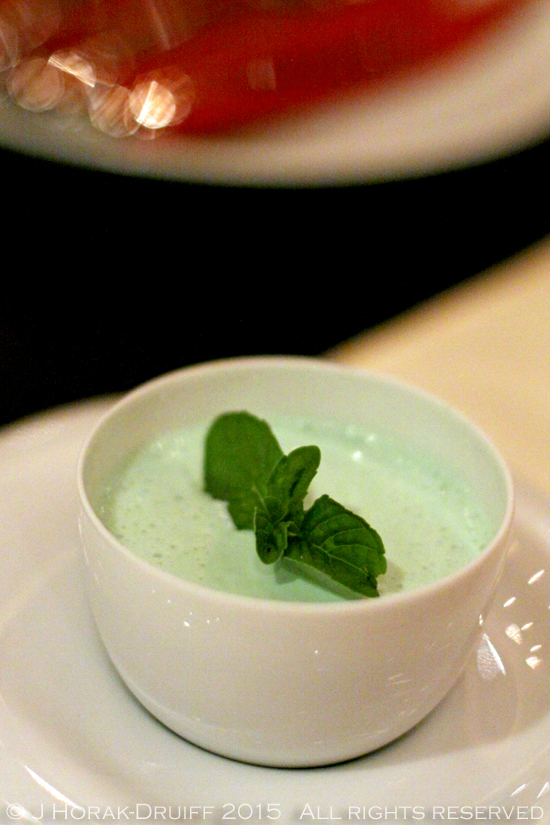 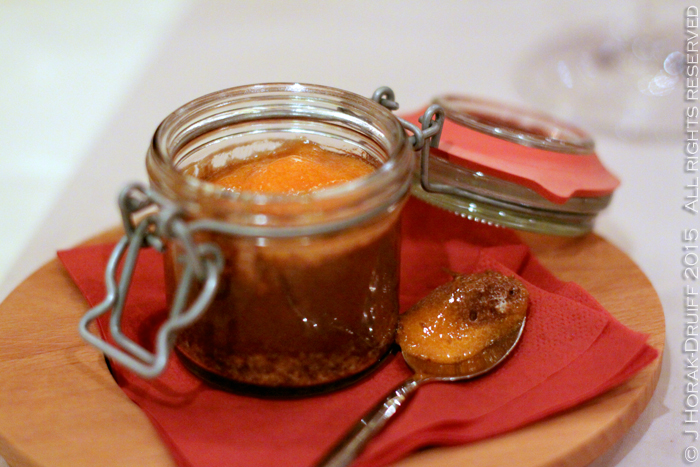 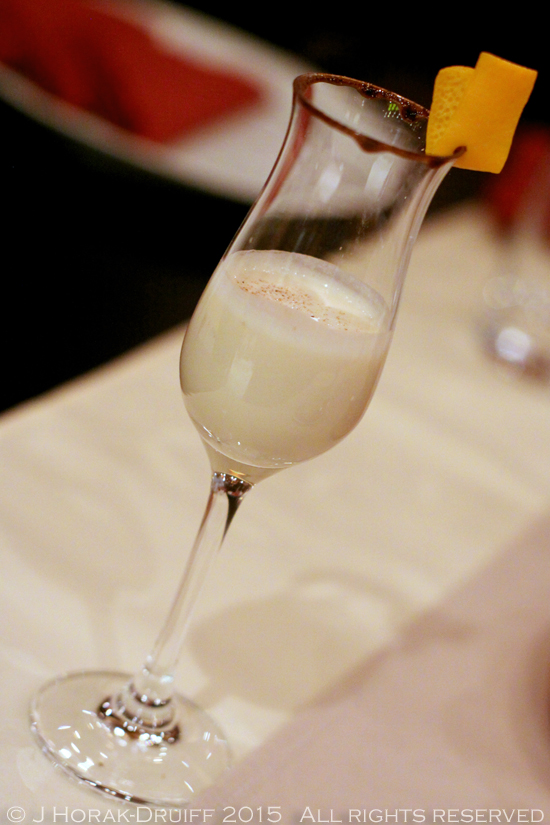 For anybody who remains deeply suspicious of former Soviet bloc cuisine, Dukley City Lounge will come as a hugely pleasant surprise.  As I said, traditional Serbian peasant food it ain’t, but if you are looking for excellent modern European cuisine and top ingredients in a relaxed atmosphere, you’ve come to the right place. Everything we were served was excellent, and portions were of a good size. As I said, the bar stocks an extensive collection of whisky and bourbon, and local wines, craft  beers and fruit brandies are also on offer. Prices are ludicrously cheap by London standards (even the Stockpot would struggle to serve you a dessert for under £2!) and things continue in a similar vein at the bar where Jonny Walker Black seels for £3.25 per 50 ml tot.  If you find yourself in Belgrade for a night and want to dine in slightly louche style without breaking the bank. Dukley City Lounge is an excellent option.

If you enjoyed this post, you may also enjoy my other restaurant reviews. For other accounts of our dinner, please see my dining companions’ blog posts:

DISCLOSURE:  I enjoyed this meal as a guest of Dukley but received no further remuneration to write this post.  I was not required to write a positive review and all opinions are my own.