It is a fact universally acknowledged that the pairing of food and wine has generated more column inches of staggering pomposity, and ignited more heated debate than almost any other vinous topic on earth. As Sid Goldstein says in The Wine Lover’s Cookbook: “The pairing of food and wine is a complex and highly inexact science. It is fraught with outmoded rules and a propensity for generalizations.” – and ain’t that the truth? How often have you been out to dinner with friends where you all want to share a bottle of wine but two are having steak and two are having fish, and the wine buff amongst you is holding forth about how you can’t share a bottle as this fish dish must have a Chardonnay; that chicken dish must have a Viognier, and the pork dish positively demands a Pinot Noir. How refreshing, then, to hear somebody who really knows their stuff in food and wine matching say that this is all old fashioned and that you should experiment to find the wine that provides the best match for your palate.

The somebody in question is Fiona Beckett, wine writer for The Guardian as well as cookery writer, contributing editor to Decanter magazine, and owner of a number of websites, including  Matching Food & Wine.  Which makes her eminently well qualified to lead the discussion when Vins de Loire hosted an evening matching Touraine wines with dishes prepared by the Andaz Hotel.  After welcoming a gaggle of food and wine bloggers including Tom, Bronwyn, Danny and Rejina , Fiona made some very sensible general remarks about wine tasting, including the fact to write sensibly about wine and to match it with food, we need to develop a memory bank of what various wines made from different grapes and in different regions taste like, so that we can make an informed suggestion as to what might pair well with a particular dish or flavours. She also said that there is no such thing as a rigid system of “this wine with that food” – each dish needs to be evaluated in terms of its weight, flavours and piquancy and then a decision can be taken as to the wine that might best complement these.  So although it is silly to say that all chicken should always be matched with red wine, it is quite sensible to say that this heavy, creamy chicken dish might pair well with a red but only if it is a lighter red. 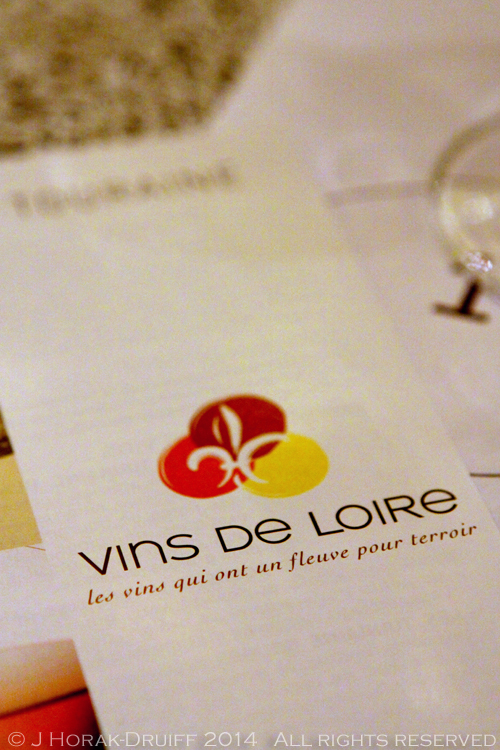 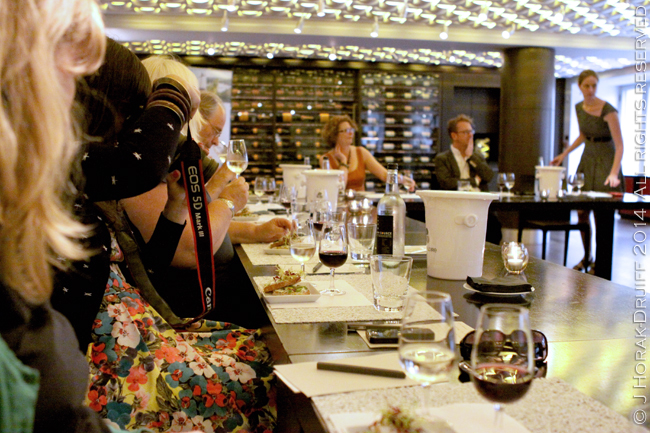 Formalities out of the way, we got down to the business of tasting.  The wines were brought out in pairs together with a small portion of a dish so that we could compare how they matched.First up was a plate of delicious crostini with goat’s cheese and broad beans.  This was brought out with a 2012 Tesco Finest, Les Chaumes (Sauvignon Blanc)  and a 2012 Lionel Gosseaume, Les Marcottes (Gamay Noir).   The Sauvignon Blanc had a crisp, lemongrassy nose and fresh green pepper notes on the palate, but I thought it lacked backbone to stand up to the creamy goat’s cheese.  The Gamay, on the other hand had a lovely and typical nose of strawberries and a deliciously raspberry palate but with a nicely balanced acidity.  Although one’s normal instinct would have been to paid the crostini with a white wine, I preferred the Gamay in this case as it was not so overwhelmed by the creaminess of the cheese. 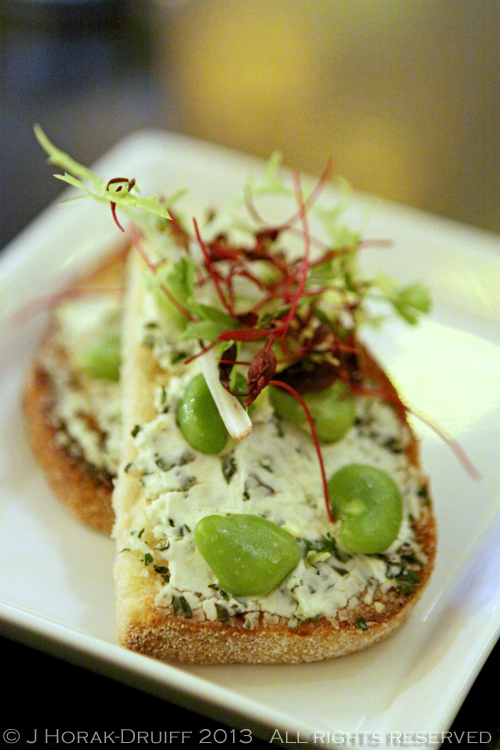 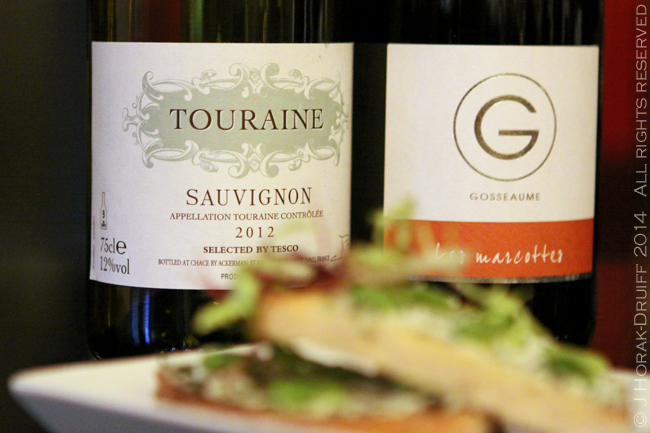 The next dish was a Vietnamese prawn and rice noodle salad with lemon juice and coriander – and lemon juice is not known for being an excellent match for wines, so I was interested to see how this might work out.  The wines that were brought out to accompany the dish were a 2012 Thierry Delaunay Sauvignon Blanc  which had a deliciously gooseberry-ish nose and palate; and a 2011 Morrison’s Touraine Sauvignon Blanc.  Perhaps it was the extra year of age on the latter that gave it a less fruity but more substantial palate.  I liked the mouth-watering acidity and tart green apple flavours, but less so the slightly bottle-aged notes, and in all, I thought that the acidity of the wine together with the acidity of the lemon juice dressing was a bit too much. 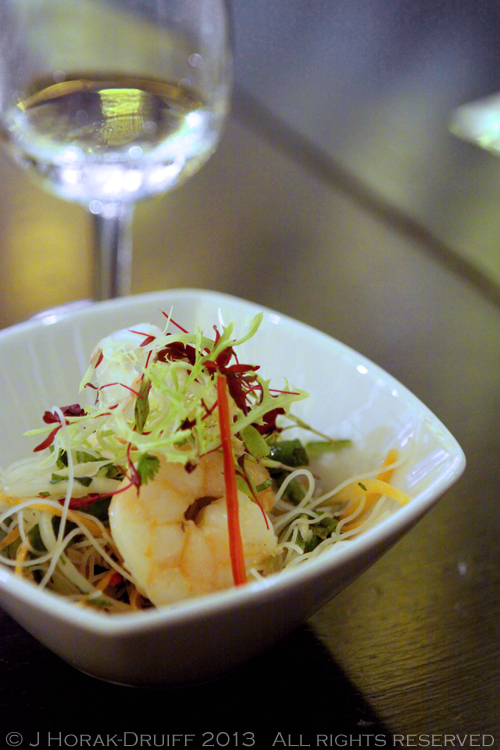 This was followed by more fish – this time sole goujons and chips with tartare sauce and lemon wedges.  To match with this, we were given a 2012 Calvet Sauvignon Blanc with a typical Sauvignon nose of gooseberries and cut grass.  On the palate it was zesty, lemony and minerally, and was refreshingly palate cleansing after a mouthful of fried fish and potatoes.  The other wine was a 2011 Domaine Guenault, Famille Bougrier (Sauvignon Blanc)  which was older and more deeply coloured, as well as having a fuller mouthfeel and more complex flavours.  If I were sipping the wines as an aperitif, I would have preferred this one, but with the food, I thought the food was too bland to match this. 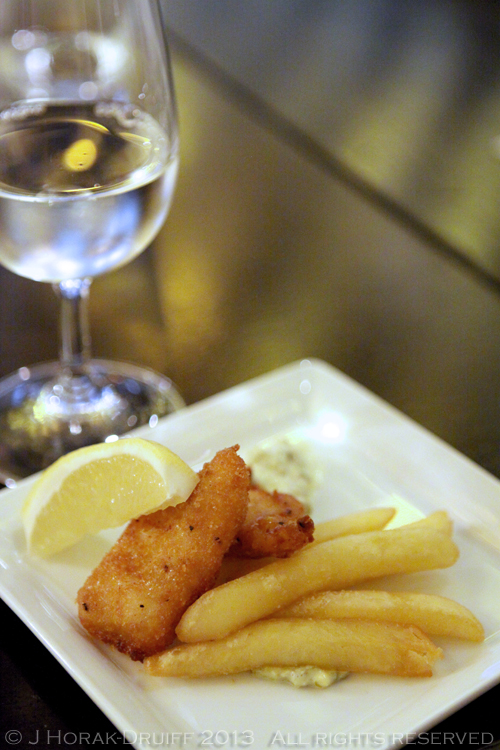 Yet more fish to come in the next course which consisted of  rare seared tuna with a sesame crust and soy sauce.  Tuna is always one of those on-the-cusp dishes when it comes to choosing wine.  Yes, it is fish, but it is as red as red meat, so what to do?  We were given a choice of the 2012 Domaine Pre Baron Sauvignon Blanc 2012 another fresh and zingy wine with good mouth watering acidity.  But I am not sure that all the acidity worked with the rounded soy flavours and the toasty sesame seeds.  I thought our other wine was a better match:   a 2010 Domaine Guy Allion, Les Quatre Pierres (Cabernet Franc).  It was a lovely wine in its own right with that characteristic intriguing combination of juicy fruitiness (think dark cherries) and an almost truffly earthiness and soft, supple tannins.  This was one of my favourite matches of the evening, with the juicy, generous flavours of the wine complementing the full-flavoured fish. Our final savoury course of the evening consisted of red meat: smoked venison with cider-pickled mushrooms and a red wine jus.  Both wines paired with this were red.  There was the same 2010 Domaine Guy Allion, Les Quatre Pierres Cabernet Franc as above; and a 2010 Henry Marionnet, Vinifera (Côt, another name for Malbec).  I liked the Les Quatre Pierres as a match with the dish, although it was probably not quite substantial enough to stand up to the robust smoked venison.  The Côt, on the other hand was everything a Malbec should be – a very deep ruby colour and a jammy nose with hints of vanilla and graphite. The depth of fruit and the structured tannins were more than a match for both the smoky meat and the cider-pickled mushrooms.  Another excellent pairing. 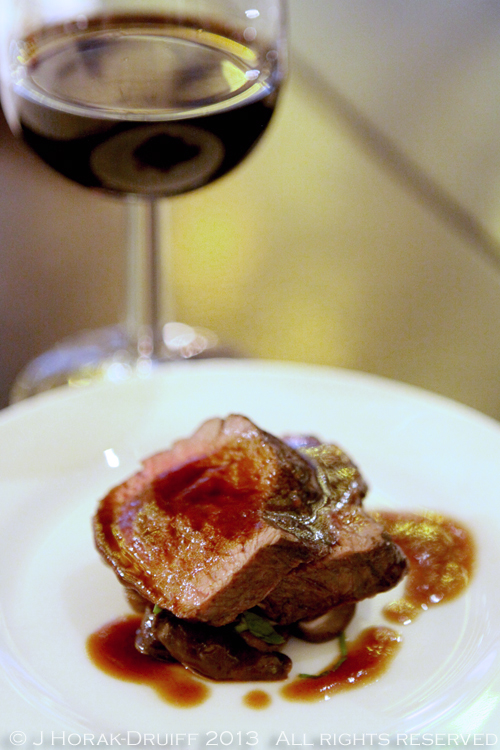 Our final dish of the night was dessert, and we had been told from the start of the evening that there was a little surprise in store for us when we got to dessert.  The surprise turned out to be that we would not be served dessert – we would make our own!  First, though, we were given a taste of the wine that had to match our dessert: a Domaine Paget Sparkling rosé NV, made in the traditional Champagne method from the little-known native Grolleau grape.  It has a nose like a summer afternoon, full of lush raspberries and peaches. On the palate it had a lovely fine mousse and is just off-dry, despite its fruit salady notes – a very pleasant sparkler with a gorgeous pink colour.  In order for us to put together our dessert, we were then let loose on a table containing a number of basics:  shortbread, mascarpone, chantilly cream, chocolate sauce, peach slices, raspberries, strawberries and meringues.  The best matches were berry-based: a strawberry shortcake confection that I tried was good.  But the chocolate sauce and the meringues were too sweet and made the wine seem tart and astringent by comparison. 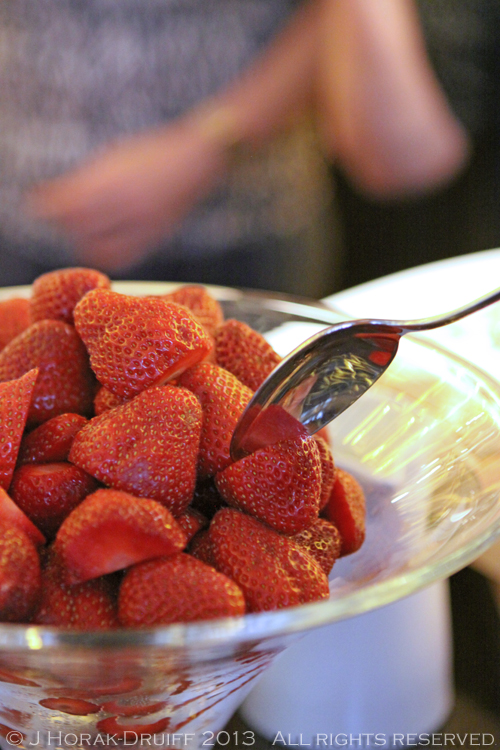 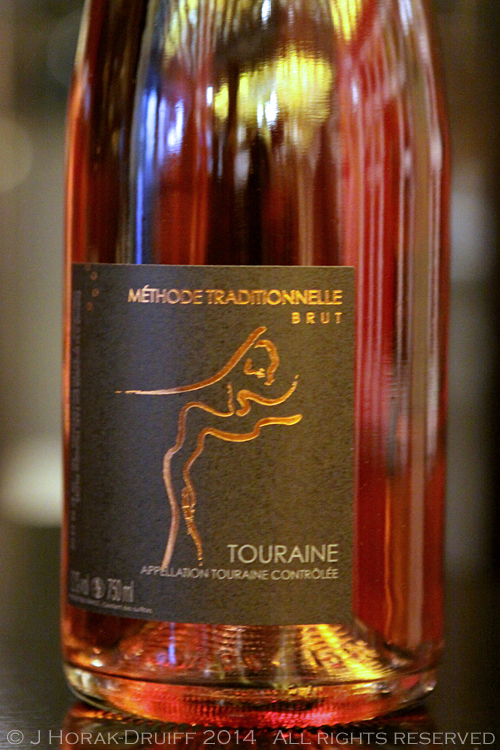 It’s not often you get the chance to try a single dish alongside two different wines to see which one is the better match, so this was a very interesting and valuable exercise for those wanting to fine-tune their matching skills.  Fiona is an engaging speaker, and the Loire valley produces some great food wines – so all in all a very successful evening that left me feeling inspired to try out some more unusual food and wine pairings at home. Thanks to Sopexa, Vins de Loire and Fiona Beckett for such a great event, and for another perspective on the evening, have a look at Tom the Cambridge Wine Blogger‘s post.

If you enjoyed reading about matching food and wine, you might also like these other similar posts that I have written in the past:

DISCLOSURE:  I attended this event as a guest of Vins de Loire but received no further remuneration to write this post.  I was not required to write a positive review and all opinions are my own.