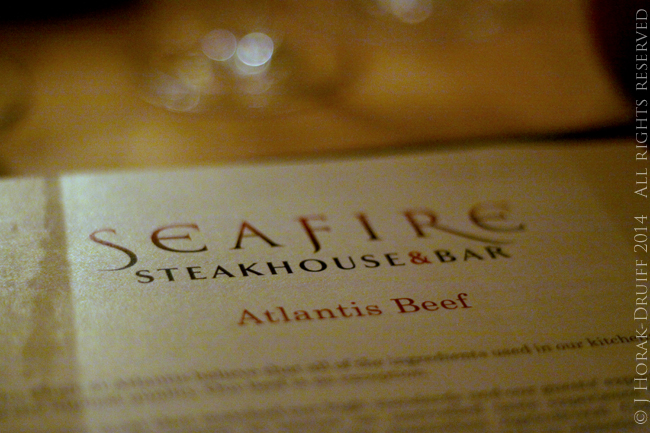 If I had to describe Atlantis The Palm in a word, that word would be certainly be “impressive”.  Approach the hotel up the spine of The Palm and it stands like an exotic salmon-coloured beacon right at the pinnacle of this man-made palm-shaped island off the coast of Dubai.  Step inside and there is the 10m tall glass sculpture by renowned glass artist Dale Chihuly in the mail lobby;  the Avenues shopping mall; the huge conference facilities; the two enormous swimming pools; the serene ShuiQi luxury spa; the Lost Chambers aquarium and massive 11-million litre Ambassador Lagoon; the Aquaventure waterpark; and no less than 17 restaurants.  When I visited in 2011, I managed to try TBJ, Ronda Locatelli, Asateer, and Nobu but missed out on so many of the other restaurants, so I was thrilled to be invited for a meal at Seafire steakhouse during my visit to Dubai late last year – both because it won the TimeOut’s best steakhouse in Dubai award in 2011 and because I know how committed Atlantis is about the quality of the beef that they serve.

Because the resort  is such a huge operation (over 1,500 rooms and 3,500 staff) Atlantis The Palm is able to breed its own herd of European and Japanese cattle in the Australian Agricultural Company’s outback stations in Queensland.  For almost a year before slaughter, they are carefully fed on a special mixed grain diet to ensure perfect fat distribution (i.e. marbling) throughout the meat.  The animals are then slaughtered and shipped whole in large batches to Atlantis, where as much of the animal as possible is used in the various restaurants.  Staff joke that on any given day, there is always some Atlantis beef in transit at sea somewhere between Australia and Dubai. All the meat has a fat marbling of at least 4 on a scale of 12, ensuring consistent quality, tenderness and flavour.

Like many of the restaurants in Atlantis The Palm, the scale of Seafire is grand. Huge and impressive rough-hewn wooden doors open into a double-volume space encompassing a bar area and very large dining area, decorated in warm earth tones.  At the one end, the kitchen and its coal burning grill is visible through large plate glass windows, and the room is often illuminated by impressive flashes of flame as fat from the meat drips onto the coals.  Impressive space aside, our evening got off to a slightly rocky start.  We arrived exactly on time for our reservation but were told that our table was not quite ready yet and directed to the bar for a drink – where we were left to languish for 15 minutes.  I understand that tables cannot always be ready 100% on time, but from the bar we could see that the restaurant was no more than two thirds full, and there were a number of empty tables.  When we were eventually seated, it was at a table indistinguishable from any of the other empty small tables – so we remained mystified as to the 15 minute wait. Our time in the bar did give me an opportunity to try the cocktails.  Without looking at the menu, I asked if they did negronis.  No, came the reply.  Slightly disappointed, I opened the menu, found a negroni on it and ordered it – and the very same barman who told me it was not on the menu made it without batting an eyelid.  And a very good negroni it was but don’t attempt to order it without first locating it on the menu… 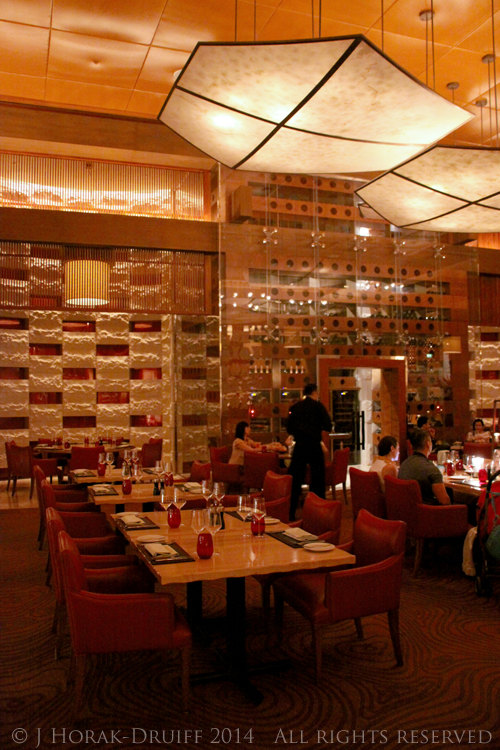 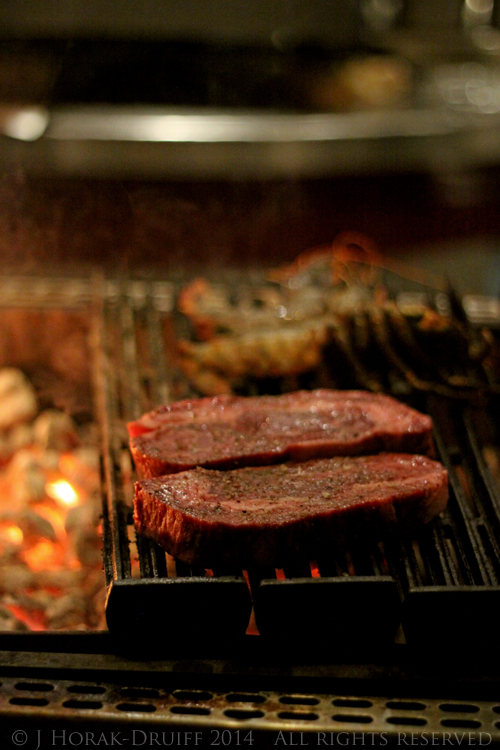 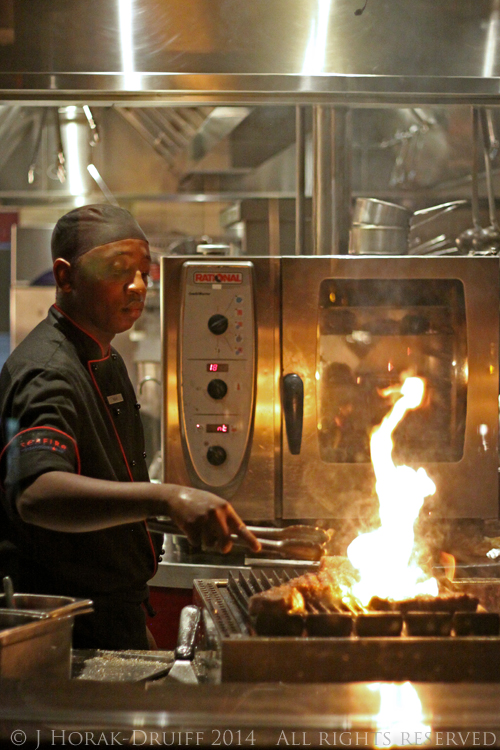 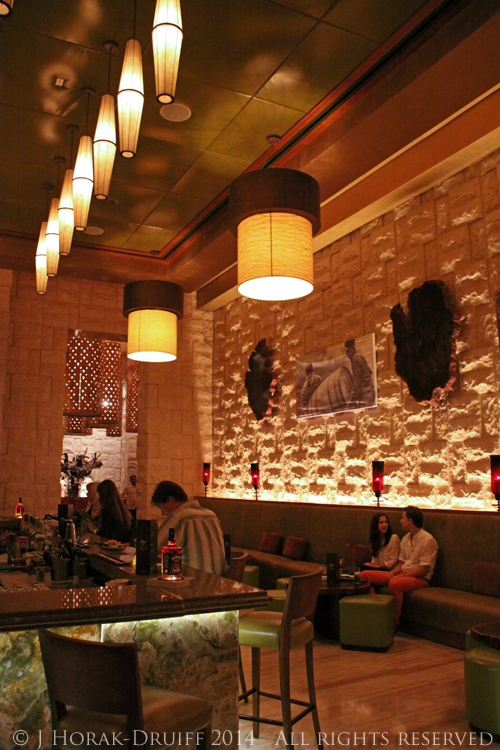 Once we were seated, things began to look up when our super-friendly and knowledgeable waiter turned out to be from Cape Town!  He talked us through the menu which features a small selection of starters as well as dishes such as ribs, seafood,burgers, salads and rotisserie chicken.  But the star of the show here is undoubtedly beef, including cuts of Japanese Wagyu, all-natural grain fed Australian beef, and US Black Angus.  Having heard how much care Atlantis takes in sourcing their beef, we felt it would be rude not to try it – but not without a few classic beefy starters to kick off!  Nick had the carpaccio of beef (made from Atlantis beef) with heirloom tomatoes, Parmiggiano, croutons and a bone marrow croquette (75 AED/£12.40); while I could not resist the beef tartar (made from Atlantis beef) served on a crouton with quail egg and caper berries (78 AED/£12.90). Both of these dishes were of an exceedingly high standard, and both truly allowed the flavours of the beef to shine.  My beef tartar in particular was generously proportioned and expertly seasoned.  We also enjoyed mopping our plates afterwards with the excellent loaf of warm bread, baked on site, and its little pat of stamped Seafire butter. 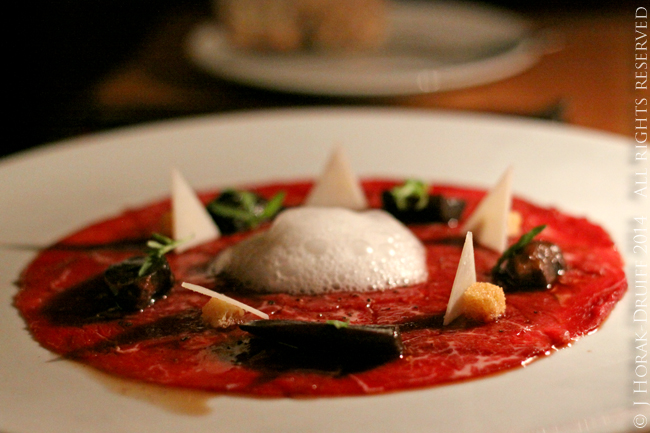 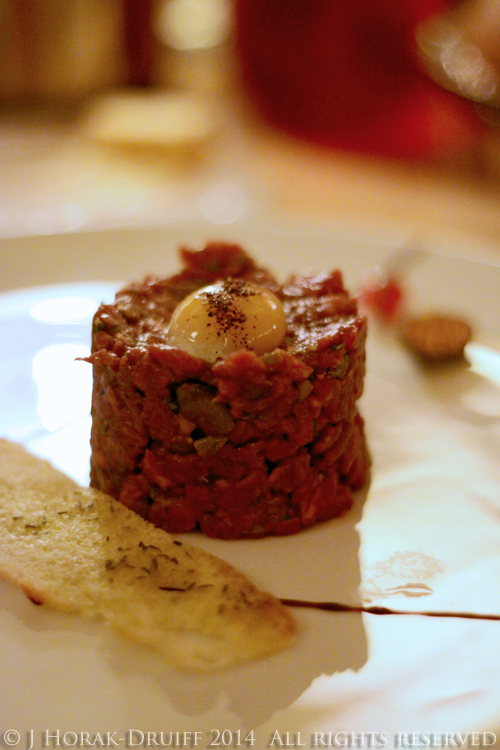 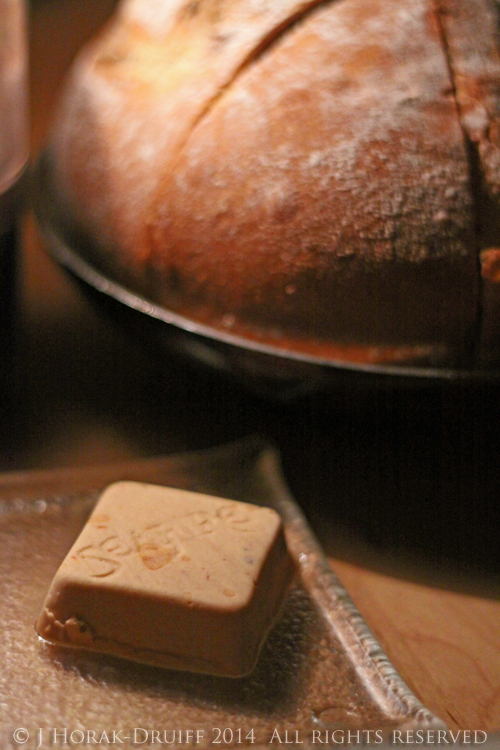 For our main course, there was no debate – it was going to have to be something from the selection of Atlantis beef selection on offer: fillet, rib-eye, sirloin or T-bone (although the 3 cuts of Wagyu available, all with a marbling score of 9+ were seriously tempting!).  In the end we both chose the sirloin: 350g  for Nick (275 AED/£45.40) and the 255g for me (210 AED/£34.70).  These were served with a whole roasted head of garlic and a sauce of your choice – from the classics (peppercorn for Nick and bearnaise for me) to the more unusual mojo and chimichurri. In addition, there are also a number of luxury steak extras and toppings available, like a peppercorn crust, truffle butter, seared foie gras and lobster, ranging from 10AED to 90 AED.  But we stuck to unadulterated steak and just chose two side dishes: truffled fries and creamed spinach (although I was sorely tempted by mushroom pot pie, truffled mac ‘n cheese and sweetcorn pudding). Nice as the side dishes and sauces were I am glad we stuck to our guns and let the flavour of the meat shine through, because it was a truly beautiful piece of meat, juicy and meltingly tender.  It is also evident that and the grill hands in the kitchen really know their stuff as the meat was perfectly seared on the outside and vivid pink on the inside – the epitome of medium rare.  To match the steak we had a bottle of 2010 La Coudraye, a natural yeast fermented Cabernet Franc from the Loire – packed with ripe berries and perfect with the steak. 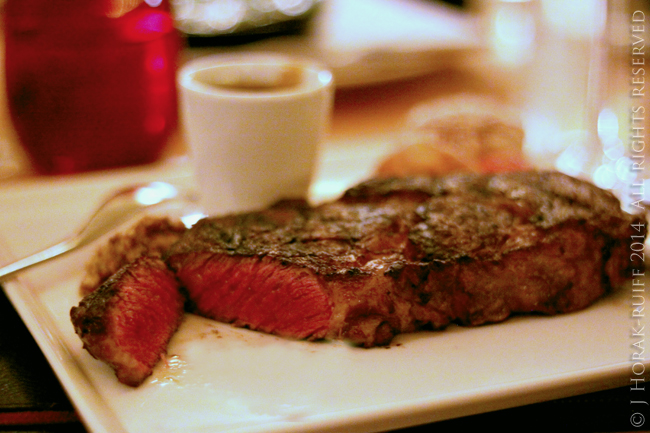 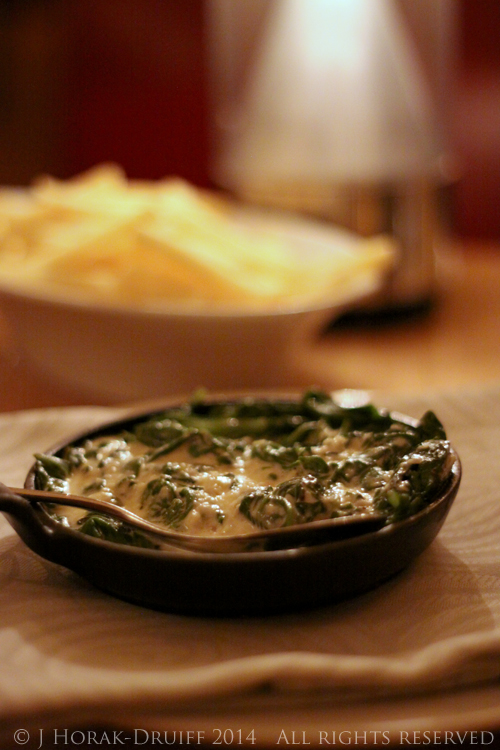 To finish with, I chose the New York cheesecake  (48AED/£7.90) while Nick chose the berry baked Alaska with white chocolate and fresh strawberries (48AED/£7.90).  The cheesecake was a manageable portion (often not the case!) and was correctly baked and dense, not the wobbly gelatin versions that I dislike. The baked Alaska was prettily served in slices rather than a traditional cake and was attractive as well as tasty – a light and lovely dessert. 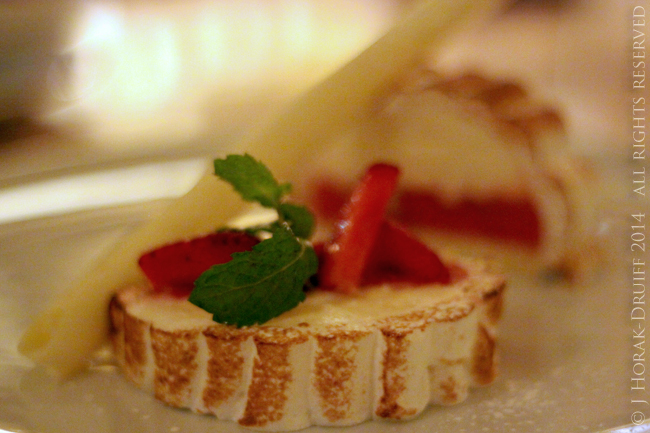 Our meal including wine would set you back in the region of £80 per head – probably an eyebrow-raising sum for a steak dinner in London, but remember you are in a 5-star resort in an expensive city. Overall, I found the food to be excellent and I think you would struggle to find much better quality meat or more spot-on grilling.  Our waiter was efficient, amusing, personable and knew the menu and provenance of the food backwards.  But the experience was slightly marred by the unnecessary wait in the bar when we arrived, as well as the astonishing slowness with which the food appeared from the kitchen – made all the more inexplicable by the fact that the restaurant was nowhere near full.  As it happened we had nowhere else to be and so the glacial speed was an annoyance rather than a catastrophe, but it shouldn’t be happening in a resort of this calibre. That said, my steak-connoisseur husband gave the meat a resounding thumbs-up and I’d definitely recommend the restaurant to Dubai-bound carnivores in need of their meat fix – provided they are up for a leisurely evening’s dining.

If you liked the photographs in this post and wonder how you can take better photos in dimly lit restaurants, you might want to attend the food photography and styling workshop I am co-hosting with Meeta in Italy in May.  At the hands-on workshop I will be covering not only the basic elements of photography but also specifically teaching how to take low-light restaurant photos.  And as if that is not enough, one lucky workshop participant who produces the best photograph of our fabulous sponsor Nino Franco Prosecco products will win a weekend in the Francos’ sumptuous Villa Barberina in the Valdobbiadene region just outside Venice.  Full details are available on my workshop page – register now to secure your place and chance to win!

DISCLOSURE:  I enjoyed this meal as a guest of the Atlantis The Palm resort but received no further remuneration to write this post.  I retained full editorial control and all opinions expressed are my own.