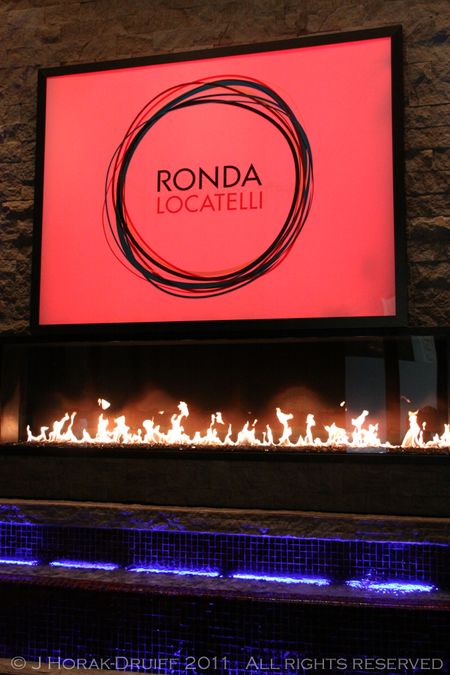 Family pizza restaurants.  They’re all about pizzas loaded with crazy toppings, plentiful portions of spaghetti Bolognese, and that desiccated “parmesan” sprinkle that does not even require refrigeration, right?  Maybe where you live, mate, but certainly not at the Atlantis resort on The Palm, Dubai.  Giorgio Locatelli is the acclaimed Italian chef who earned his Michelin star at Zafferano and practically introduced fine Italian dining to London.  His Locanda Locatelli and Refettorio restaurants in London provide a showcase for excellent traditional, regional Italian food made from the highest quality fresh ingredients.  This concept is also behind Locatelli’s Dubai outpost Ronda Locatelli where chef Alessandro Bottazzi creates traditional Italian dishes that sing with flavour, but in a relaxed family atmosphere rather than a starched formal setting.  Under his guidance, in July 2011 Ronda Locatelli was awarded the title of most authentic Italian restaurant in the Middle East by Restaurant Magazine. Like much of the rest of Atlantis, the interior feels slightly bonkers – a retro 70s explosion of orange and brown and nothing vaguely Italian at all.  But the high-ceilinged room has an airiness that was rather apealing in the 40C+ heat of summer; and the huge brick-clad tower chimney of the four pizza ovens makes for a very impressive central feature (scroll to the bottom of this post to see a pic). We did glance briefly at the menu but eventually decided to throw caution to the wind let the chef prepare a menu for us.  As it was the holy month of Ramadan at the time of our visit, no alcohol could be served during daylight hours, so we all opted for a delicous lemon and mint drink which proved fantastically refreshing. The bread selection was good, ranging from grissini to ciabatta to focaccia – I didn’t try the spicy dipping sauce but loved the mildly peppery olive oil.

First up came a plate of grilled vegetables which was pleasant enough even if not stellar – although I did like the fact that the zucchini retained some crispy texture though. I far preferred the other plate of pre-meal snacks which consisted of tomato, garlic and basil bruschetta.  this was nothing short of spectacular: the bread toasted to just the right degree of char; tomatoes bursting with ripe sun-warmed flavour; and wafts of garlic and basil.  Heaven!  Would have eaten more had I not been (wisely!) saving myself for the rest of the meal! We could smell the next course before we could see it:  the pizza bianca with potato, pancetta and black truffles was so redolent with the earthy, almost human scent of the truffles that its reputation preceded it, so to speak!  The Maitre d’ also brought out a plate of whole truffles to show us what they look like pre-shaving.  I am already a huge fan of pizza bianca, so this was a no-brainer for me to adore.  Potato on a pizza can be tricky (and usually sounds just, well, wrong – like chip butties) but when it is done well and in moderation it is dreamy – as it was here – a great foil for the saltiness of the pancetta. Hot on the heels of the pizza came the braised beef ragu on garganelli pasta (a combed penne pasta – the texture makes the sauce stick to the tubes better).  This was similarly satisfying and delicious, with the nuggets of meat yielding a depth of flavour that only comes from painstakingly slow cooking, and the al dente pasta retaining just the right degree of toothsomeness.  Perfect comfort food. The main course was an Atkins dieter’s dream and seemed to consisted of a showcase of every type of protein that the restaurant offers.  My father would have called it a mixed grill and tucked in with relish!  From the sea, our platter included a large and succulent prawn; a piece of seared tuna steak perfectly pink in the middle and with immaculate grill marks on the outside; and a tender piece of grilled calamari.  From dry land we had a piece of chicken, a meltingly tender piece of steak; and a lamb chop packed with flavour.  On the side, we had a green salad and a tomato and onion salad, and squares of polenta that were crispy on the outside and creamy on the inside.  Because everything was so simple, there was nowhere to hide sub-standard ingredients, so more than anything else this dish showcased the quality of the ingredients that the restaurant is using.

Although we all professed to be full after that, we managed to find a little room in our ice-cream stomachs (you know, the extra one you reserve only for ice-cream!) for dessert.  This was both petite and light – mixed fresh berries with a scoop of vanilla gelato topped with a caramelly creme brulee style topping.  And as soon as we said we liked that, a second dish of gelato magically appeared at our table – lovely bittersweet coffee gelato this time.  And just as we were finished explaining why we could not possibly eat anything more, a final plate appeared, this time bearing cream-filled cannoli and an almond & berry tart topped with an absolutely sublime tart cherry compote.  Yes, I am embarrassed to admit that we found space for this too. Other than the food, what I liked about Ronda Locatelli was its informality.  Despite serving really rather good and authentic Italian food and premium ingredients such as truffles, it was about a million miles from stiff, traditional find dining. Some of the other diners had their children with them and the menu accommodates younger tastes too, without alienating the adults.  I believe crayons and paper are also supplied to entertain younger diners, so the whole place is family-friendly without descending into McDonalds madness.   I have holidayed in enough resort hotels to know that after a week in a resort, you are probably sick of the sight of large formal meals or groaning buffet tables.  For anybody who shares those feelings; for foodie families travelling with children; and for all lovers of authentic Italian food, Ronda Locatelli is a godsend.

DISCLOSURE: This was a complimentary meal which I enjoyed as a guest of Atlantis The Palm resort. Stay tuned for more posts on the resort, our Iftar buffet at Asateer and a spectacular dinner at Nobu. If you enjoyed this post, you may also want to take a look at my other restaurant posts.