You are here: Home / Recipes / Gluten-free / Beetroot risotto with goat’s cheese and pine-nuts 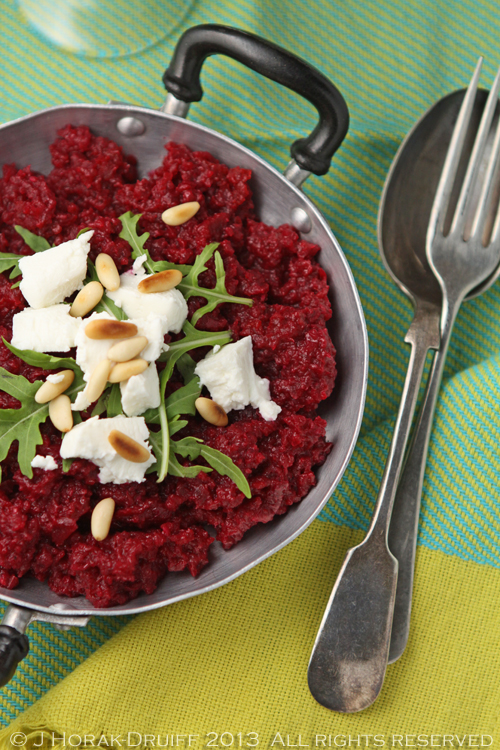 With touching faith in the reliability of our own senses, we humans are fond of saying “I’ll believe it when I see it with my own two eyes”.  But as anybody who has spent 10 minutes in a criminal court listening to an eye-witness being cross-examined will know, our eyes, ears and memories are notoriously unreliable things.  Since a friend went to blacked-out restaurant Dans le Noir this week I have been pondering the relationship between our eyes and our palates.  At the aforementioned restaurant, you eat in a completely dark room, leaving your senses of smell and taste to do all the work – and my friend said she had great difficulty in distinguishing whether she was eating, say, carrots or potatoes – or indeed fish or chicken!

It seems she is not alone in this.  There have been quite a few studies done on the effect of the visual appearance (specifically the colour) of food on our perception of its taste.  For example, test subjects were given a series of fruit flavoured drinks – yellow for a lemon-flavoured one; red for a strawberry flavoured one etc.  When the colour matched the flavour, subjects found it very easy to identify the flavours correctly – but when for example the strawberry flavoured drink was coloured green, subjects struggled to identify it.  Their eyes had led them to expect one thing while their tastebuds encountered another, leading to mass confusion.  In a similar study, subjects were given a number of identically flavoured strawberry drinks but their colours ranged from very pale pink to deep red.  Subjects consistently identified the darker coloured drinks as  being more strongly flavoured when in act they were no different to the palest ones.  Colour plays a key role in food choice by influencing taste thresholds, sweetness perception, food preference, pleasantness, and acceptability.  Obviously our caveman ancestors evolved to avoid, say, black foods as this could indicate mould and decay but modern man has apparently inherited their aversion to certain colours.  In another experiment, test subjects were fed steak and chips under coloured lights than made the food appear perfectly normal.  When the coloured lights were turned off and normal light was used instead, it became apparent that food dye had been used to colour the steak blue and the chips green – at which point most subjects refused to eat any more and some actually felt physically ill. 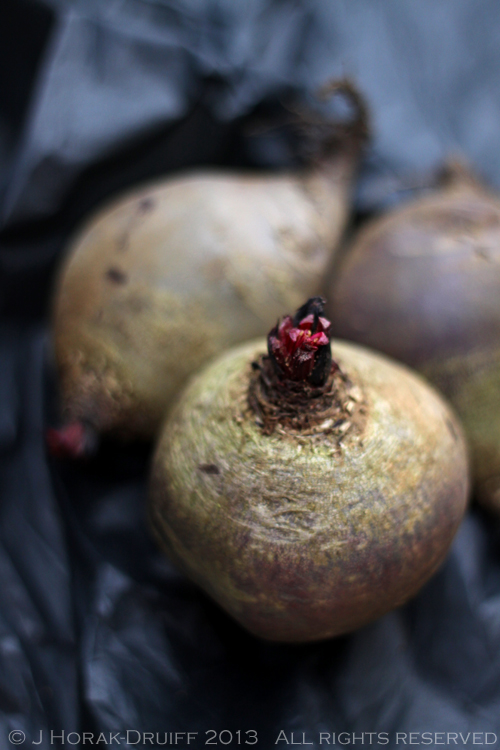 I used to direct people to these experiments when they asked me how on earth I could not like beetroot. Anybody who has ever peeled a beetroot and ended up looking like a mass-murderer; or served it up at a barbeque next to a potato salad and watched it turn the blameless potatoes a distressing shade of purple will know what I mean.  The colour is too reminiscent of blood; too intense, which in turn magnifies one’s perception of the peculiarly earthy taste. Add to this the fact that I don’t like the vinegar that beetroot are often pickled in and you have a perfect storm of vegetable dislike. But the older I got, the more I wanted to like beetroot.  It’s super good for you – packed with antioxidants (betacyanin that gives the beetroot its colour), iron, soluble fiber and silica which helps the body to absorb calcium. It’s also one of the few things still growing on the allotment in the dark days of November. For me, the eureka moment with beetroot was the day I roasted them.  As with most vegetables, roasting caramelises the natural sugars in beetroot, gives it an appealing texture and makes it far more palatable than any other method of cooking I’ve tried. Once roasted they can be eaten at once or pureed and frozen to last through winter.  Or you can puree and use them immediately as I did, in this jewel-coloured and perfectly autumnal risotto. 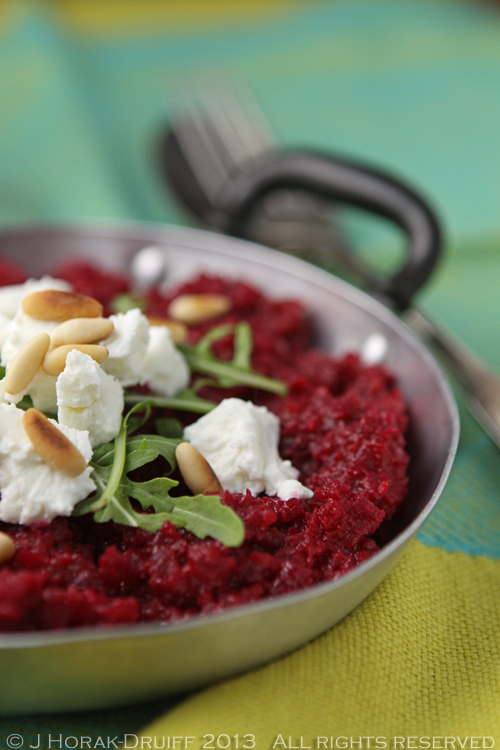 5.0 from 1 reviews
Beetroot risotto with goat's cheese and pine nuts