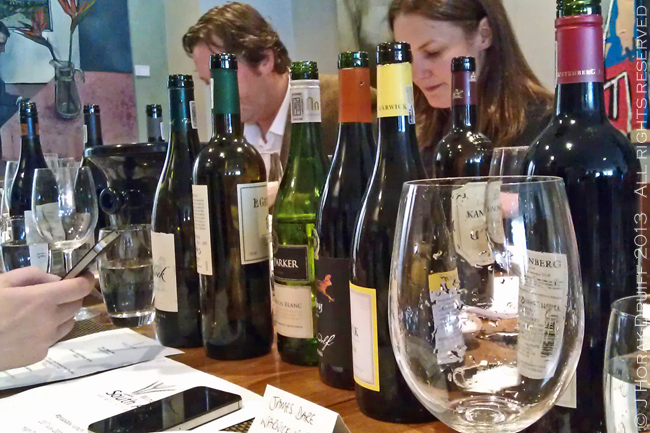 There are over 1,200  people calling themselves “social media evangelists” on LinkedIn.  I don’t pretend to be one of them – but I will happily admit to this:  I am a South African wine evangelist.  Or rather, I am an evangelist for all things South African!  I love my country, but I realise that some things about it are hard to sell.  We have a turbulent past that is still all too fresh in the memories of many; we have a young democracy that regularly struggles to find its way; and we have crime statistics that (quite rightly) make most western Europeans blanch.  But one of the easy sells about South Africa is its wine.  I have lived I the UK for 13 years now and travelled widely in Europe.  I have sampled some outstanding examples of French, Spanish, German, Austrian, Italian and Portuguese wine. But my eyes still light up when I spot a South African wine on a restaurant wine list.

If this is how you also feel about South African wines, then get yourself down to High Timber, a restaurant co-owned by Jordan wines and South African sommelier, businesswoman and all round dynamo Neleen Strauss.  The wine list is reassuringly heavily populated with South African big hitters (Jordan is understandably well represented!), making it the perfect venue to host the annual Wines of South Africa Braai Day tasting.  We’ve all been to wine tastings where you stand across the table from the winemaker and he leans slightly menacingly forwards as you taste his wine, regarding you with a beady eye and almost daring you to say you don’t like it. But there is none of that at the WOSA tasting where guests, winemakers, wine merchants ad wine writers all mingle around the lunch table and bottles are passed up and down with recommendations from your table neighbour, rather than being formally presented by the winemakers.   Strolling onto the High Timber terrace for the 2012 lunch (yes, it’s taken me THAT long to write it up…)  I was greeted by a charming gentleman whose opening gambit ws “you’re Cooksister!  I follow you on Twitter!” – the 21st century way to a woman’s heart 😉  This turned out to be the very charming ??  from Seven Springs Wine, who also introduced me to Warwick’s Mike Ratcliffe, a powerhouse of enthusiasm and charm.  After introductions over a rather fabulous glass of 2008 Graham Beck Brut Rosé (a blend of Pinot Noir and Chardonnay, available from SA Wines Online for £13.99) we made our way to the table for dinner.  It was about at this point that I realised I had brought my camera… but left the battery at home in the charging unit. So all photos were taken on my phone –  apologies in advance for the 2012 photos! 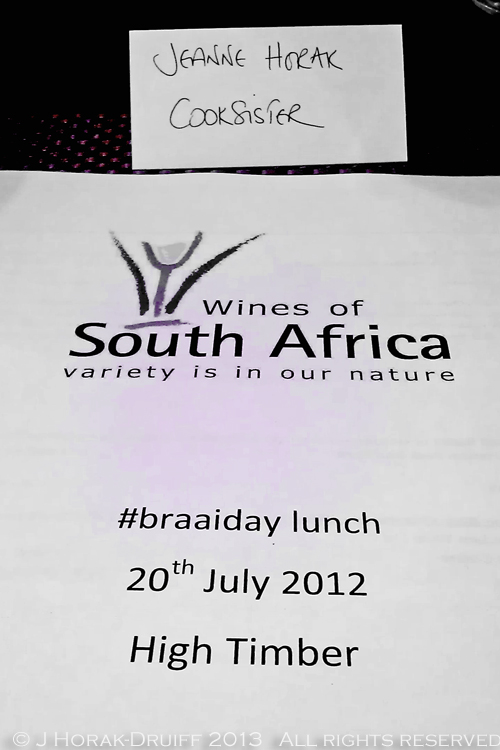 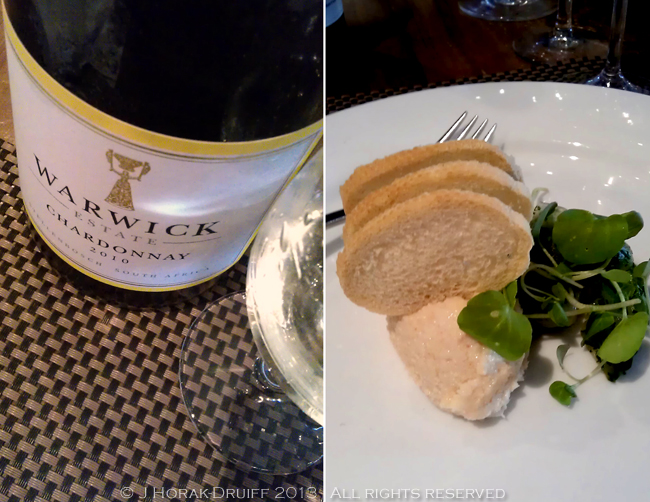 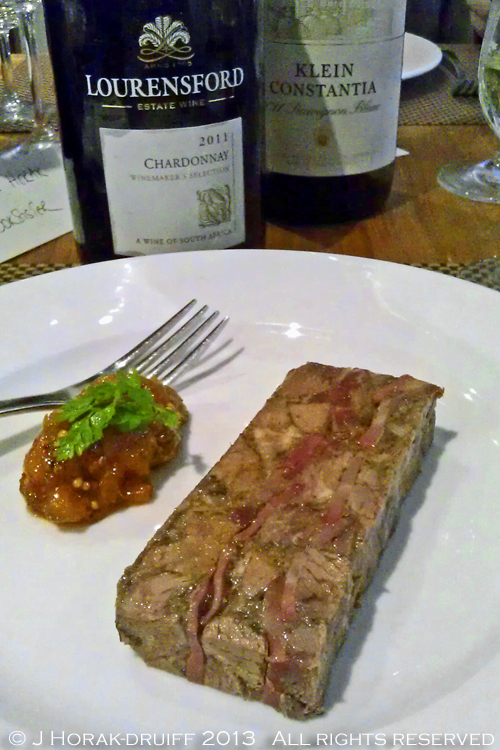 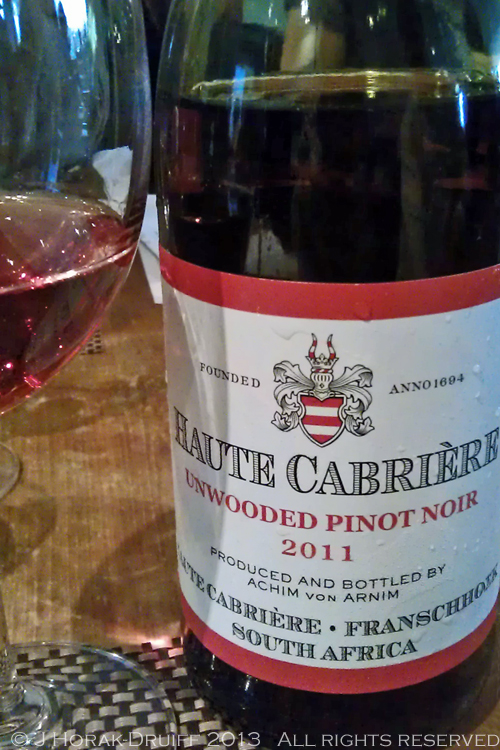 The meal was vintage High Timber – classic South African with a twist – and started off with mock snoek paté (snoek being  hugely popular game fish in South Africa but extremely hard to obtain in the UK – angelfish makes  good substitute).  The smoked fish pate was pretty full-flavoured so from the selection of wines doing the rounds along the table, I chose to match it with two Chardonnays, the first being a 2010 Warwick Chardonnay (£14.99) – a wonderfully rich  buttery wine, but balanced by a crisp citrus acidity, and a fabulous partner with food.  The second wine was a 2011 Lourensford Winemakers Selection Chardonnay(£11.99), packed with rich apricot flavours, honeyed notes and a lovely creamy mouthfeel with a medium finish. This was my favourite white of the day. As I was on whites, I also sampled the 2012 Altydgedacht Ralph ParkerSauvignon Blanc (£11.00) – this was a revelation, packed with the flavours of ripe white peaches rather than the more austere, grassy Sauvignon Blancs that I am used to.  The next course was a biltong and oxtail terrine served with blatjang, the Afrikaans word for chutney.  And doing the rounds on the table was a curiosity – a 2011 Haute Cabriere unwooded Pinot Noir (£10.99).  The colour was pale, even by Pinot Noir standards and seemed to suggest a rosé.  On the palate it was light and lacking in substance – an interesting experiment, but it might just be than Pinot Noir needs wood! 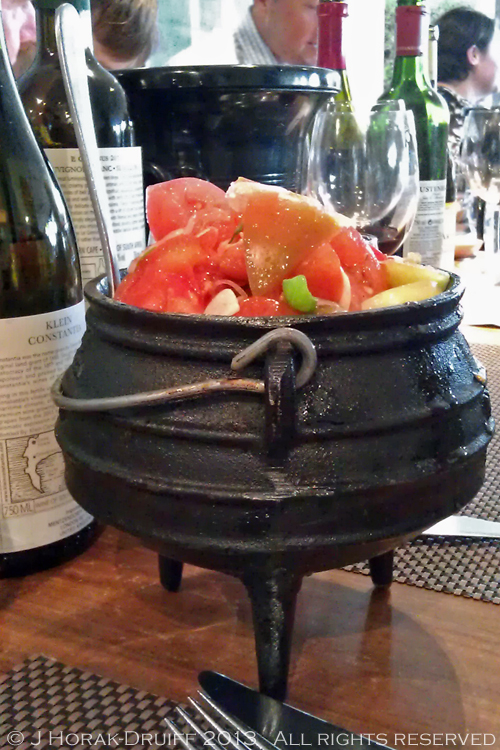 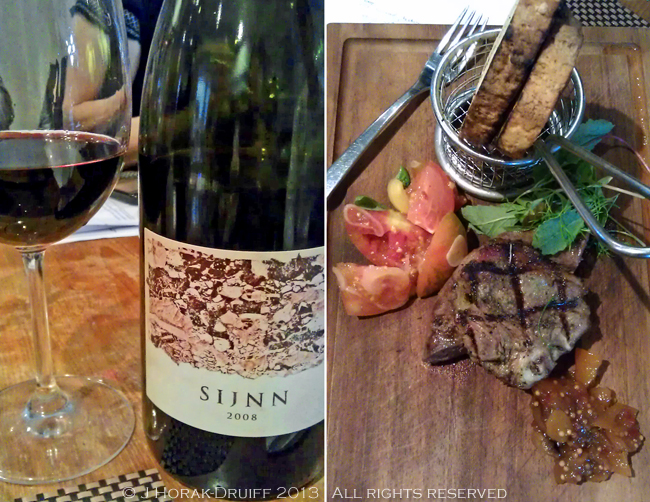 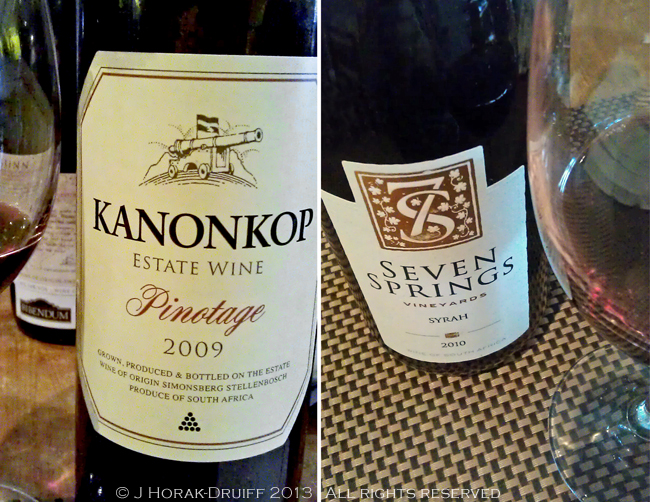 The meat course consisted of  T-bone chop of Cumbrian lamb and boerewors, both expertly done on the braai, accompanied by a heritage tomato salad (served, to my delight, in a traditional South African potjie or 3-legged cast iron pot) and cornbread.  This seemed the perfect excuse to try some of the red wines on the table, starting with the glorious 2010 Seven Springs Syrah (about £13.00), fantastically deeply coloured and packed with ripe red fruit and hints of spice – my favourite red of the day.  I also tried the 2009 Kanonkop Pinotage (about £24.00) which is truly how Pinotage is meant to taste – ripe, fruity and elegant, not harsh ad tannic.  Definitely worth the fairly hefty price tag.  Bonus points, too, for their info-packed back label with its handy chart of optimal drinking years – apparently up to 2023! Another wine I tried was the 2008 Sijnn Red – interesting because of its unusual blend (40% Shiraz, 39% Mourvedre, 22% Touriga Nacional and 9% Trincadeira).  Despite being one of the oldest wines we tried, it did not seem to have integrated well, with the characteristics of individual  cultivars each still struggling to be heard, rather than forming a harmonious whole.  I wonder what another couple of years in the bottle will do for this wine? I, for one, can’t wait to find out. 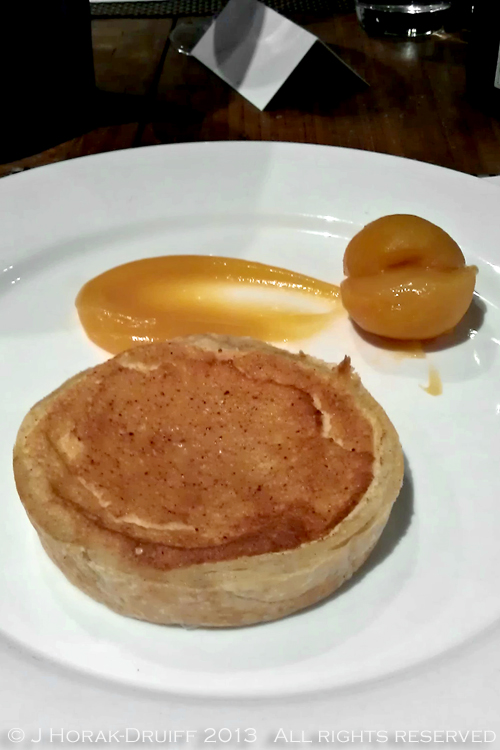 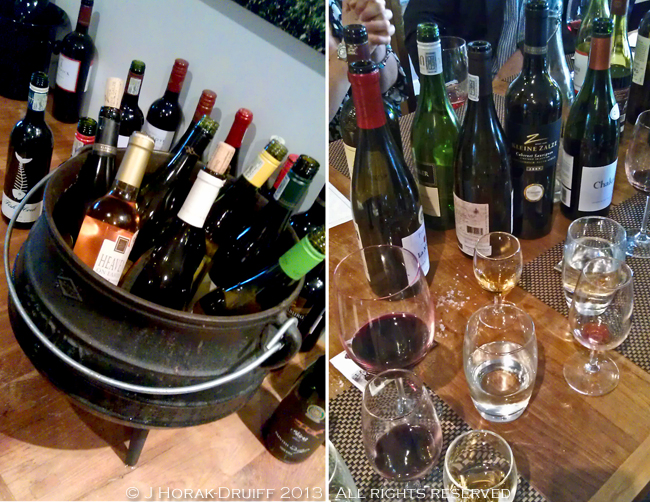 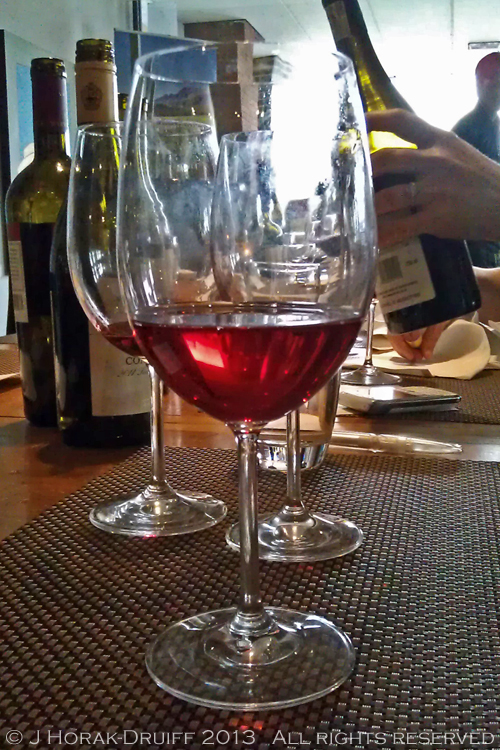 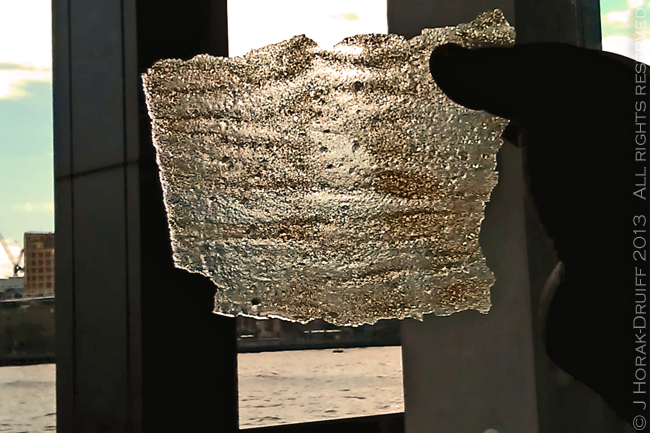 Dessert consisted of proper South African milk tart with apricots – and just for that added frisson of nervous excitement, the chef confided in me that he had made it from my recipe! No pressure, then. Luckily, my recipe had translated well and the flaky crust encircling a wobbly, creamy, cinnamon-laced interior was a hit all around the table. I was reaching saturation point by this time, but did manage a small sip of the Stellar Organics Heaven on Earth dessert wine , which was awash with lychees and honey and a great finish to the meal. All that was left was to sample the remaining wines on the table (in their authentically South African ice bucket/pot!) and charm the chef into bringing out a piece of his potato glass for me to try – an addictive, ridiculously thin, transparent potato concoction that’s become something of a High Timber signature and something that everyone should try at least once in their life.

When the WOSA braaiday dinner rolled around again this year, I managed to remember to bring my camera along, complete with functioning battery and memory card! The venue was High Timber once again and we were treated to a South African style meal to accompany our wines for the day.  For nibbles when we arrived, there were platters of biltong and droëwors, two South African delicacies that are cured and dried in-house at High Timber – a real treat for South Africans. We started with two plump, juicy chargrilled tiger prawns with garlic and chilli, served on potato salad with a sweet condensed milk dressing (very traditional South African!). This was followed by a plate of traditional South African braaivleis (barbecue) including a lamb chop, a piece of boerewors, a piece of sirloin steak and, to my delight, a braaibroodjie – a toasted sandwich cooked on the barbecue.  And for dessert, we were once again treated to a milk tart, this time with South African Amarula Cream. 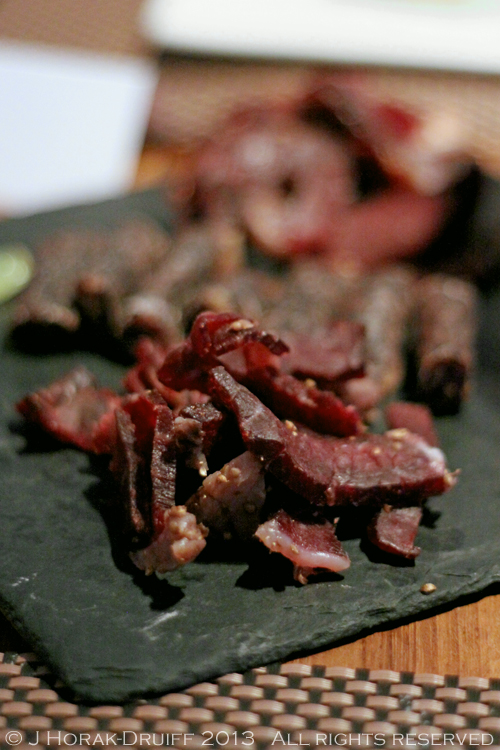 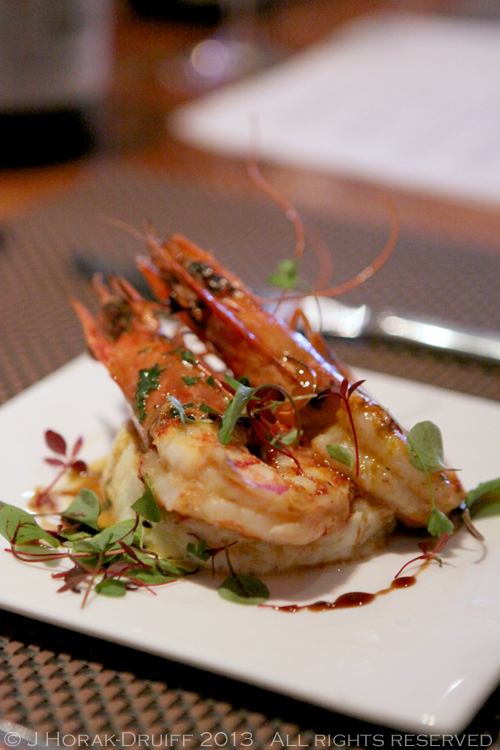 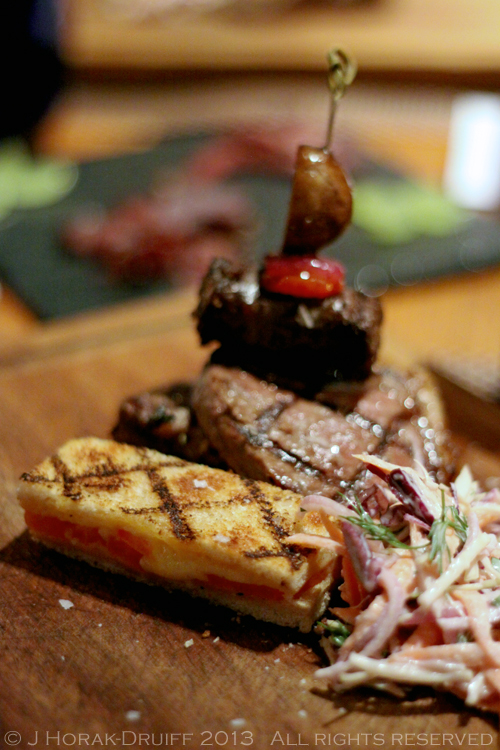 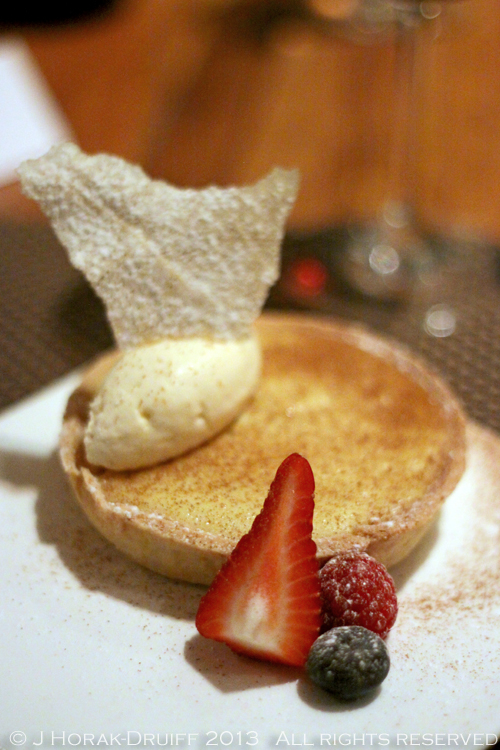 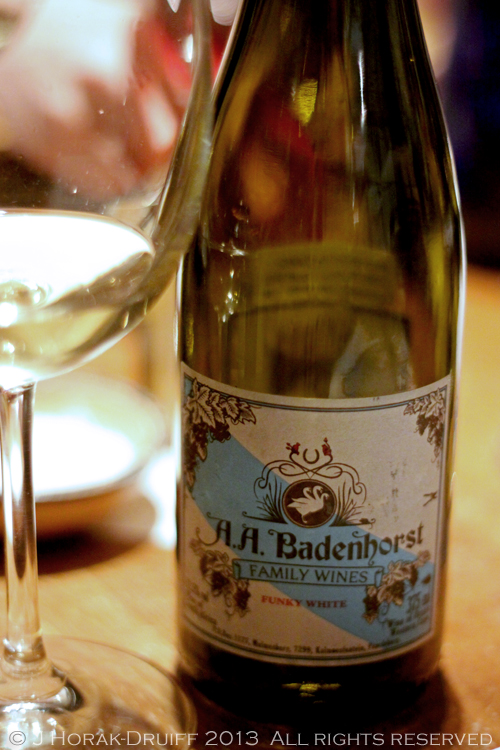 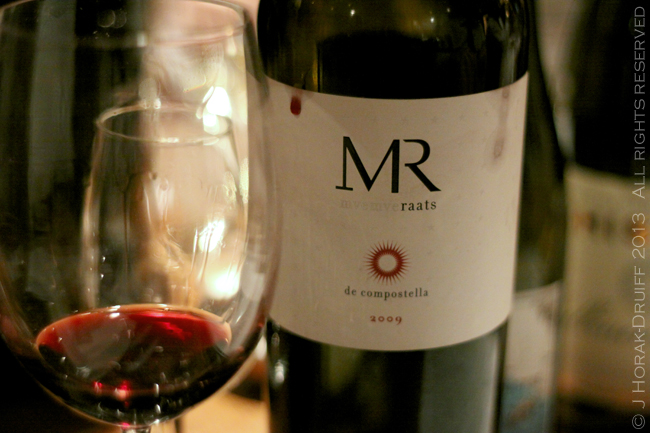 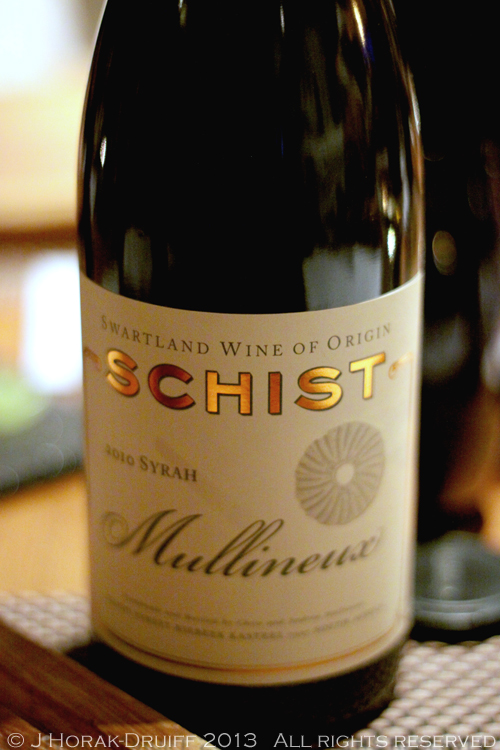 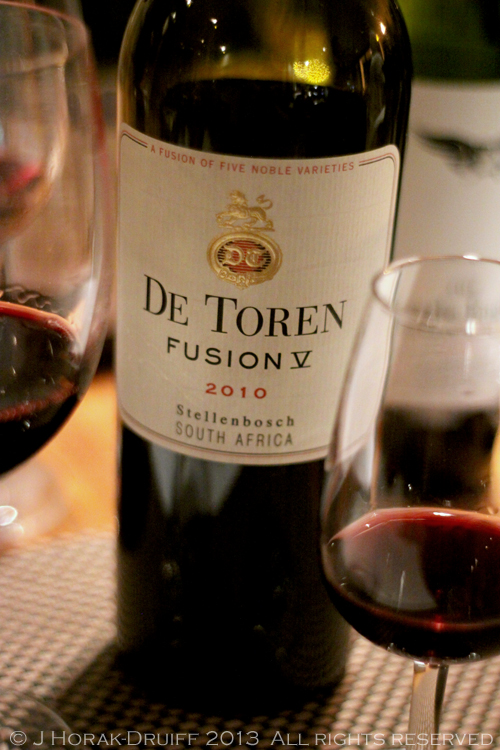 Once again, the lunch served not only to reaffirm what an excellent job High Timber does of bringing South African food to the Brits, but also to showcase the amazing breadth of excellent wines that South Africa produces – from the classics like the De Toren Fusion, to the experimental like the Badenhorst Funky White.  And once again, the event would not be possible without the tireless energy of Neleen and her team at High Timber, as well as the fabulous ladies from WOSA, Claudia and Jo – you rock!  And if you can still focus after an evening of such Bacchinalian delights, the walks along the river bank from High Timber affords one of the best views of The Shard in London.

Here are what other people said about the day: 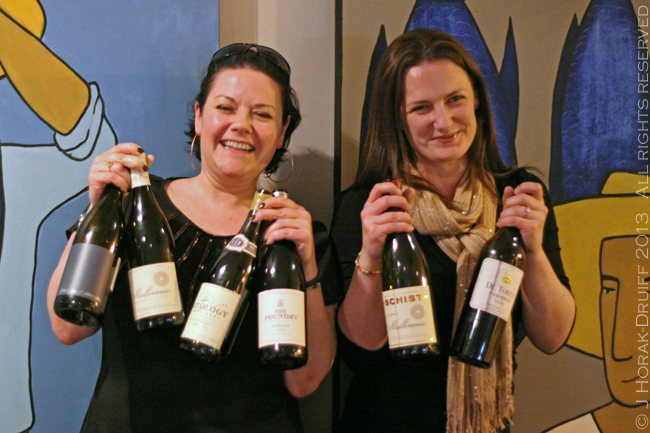 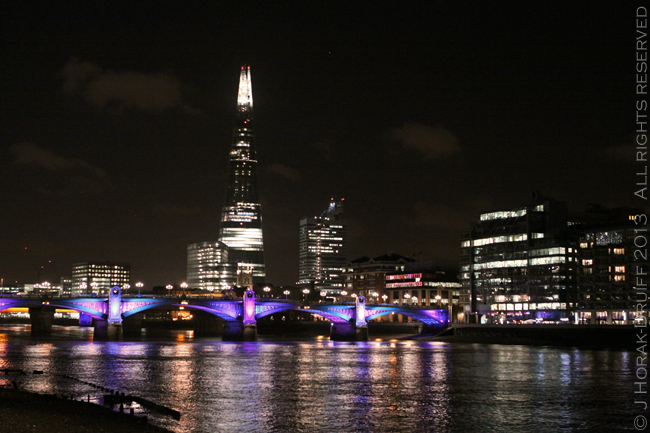 DISCLOSURE:  I attended both these meals as a guest of Wines of South Africa.  I received no further remuneration to write this post and all opinions are my own.