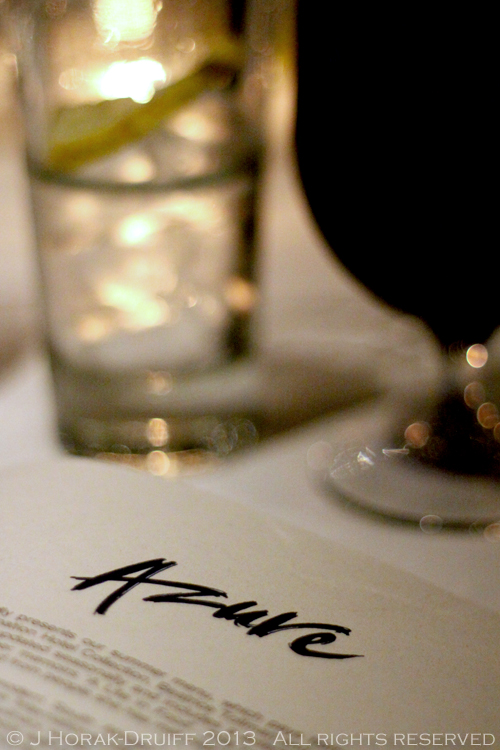 The human mind is a funny thing.  It is so good at constructing a reality based on assumptions and preconceptions that it often pays scant attention to the actual realities going on around you.  I remember arriving at Johannesburg station one day in the mid-1980s with my family and my father renting a car and insisting that he needed neither a map nor directions and that he *knew* that the Sun City resort was in this direction. 45 minutes later we found ourselves on the outskirts of Alexandra township at nightfall, hopelessly lost and as noticeably out of place as a bear in a chicken coop.  It was not a highlight of our family holidays.  Neither was the time a couple of years later when my dad refused all offers of maps and took his family for a quick stroll to acquaint them with Amsterdam, which he knew “like the back of his hand”. And the back of our hands were mainly what my brother and I were staring at in our teenage embarrassment as he wandered directly into the red light district! I vowed never to be like him – so what was I doing in Camps Bay asking a confused passer-by where the 12 Apostles Hotel was?

I had made up my mind that the 12 Apostles Hotel was the big white hotel in Camps Bay – but it’s not.  That’s the Bay Hotel.  You need to carry on driving through Camps Bay and stay on Victoria Road, hugging the coast and watching the spectacle of the 12 Apostles mountain range soaring above and ahead of you – and about halfway between Camps Bay and Llandudno, just when you think “surely we’ve gone too far?”, the 12 Apostles suddenly comes into view on your left, perched in solitary splendour against the mountainside.  The hotel is a one of the Red Carnation group of hotels, a collection of sixteen award-winning luxury  family-owned and run boutique hotels, located in the UK, South Africa, Switzerland and the USA. The group was founded by South African-born Bea Tollman and her husband  and has since the mid 1970s established a reputation for timeless décor, exceptional locations, highly personal guest care, and celebrated cuisine – and the 12 Apostles is no exception. This boutique hotel with only 70 rooms enjoys some of the best panoramic views in the Cape, an award-winning restaurant, a spa (with a glass treatment room perched on a rocky outcrop with spectacular views) and a cinema – but is still only a 15 minute drive from central Cape Town and only 5 minutes from Camps Bay’s glorious golden beach.

But we were not there for the beaches – we had come to dine at the hotel’s flagship restaurant Azure, which makes a regular appearance on restaurant awards lists.  The restaurant is situated on the first floor above the lobby and is decorated in shades of dark royal blue and white.  It’s a perfectly attractive room, but too fussy for my taste. I felt that the abundance of heavy drapes (presumably to enclose tables for private dining areas?), pictures on the walls, and vases and other knick-knacks in blue provide an unwelcome distraction from what should be the main attraction:  the outstanding view. Nevertheless, we were more than happy with our corner table by the window from where we could watch the last rays of the sun slipping into the ocean.  After we had been seated by our exceptionally personable waiter, we had the pleasure of meeting the executive chef, Henrico Grobbelaar,  an engagingly intense young man who had swapped a career in engineering for a career in the kitchen and gone on to win the Sunday Times Chef of the Year in 2009. He explained that the menu was made up of two distinct parts, namely classics and old favourites (some made to Mrs Tolman’s personal recipes), and more contemporary “Cape cuisine with a modern approach”. Having experienced some of the more traditional dishes when I dined at the Milestone Hotel in London, we opted for a 4-course tasting menu of the more modern dishes. There is also an extensive wine list of overwhelmingly South African wines, a good selection of French Champagnes, and a sprinkling of foreign wines.  A nice touch is the availability of various flights of wine centred around a theme, as well as sommelier Gregory’s suggestions of wines to pair with items from the menu. As Nick was driving, he could not drink, so I kept him company with just a glass of Buitenverwachting Riesling. 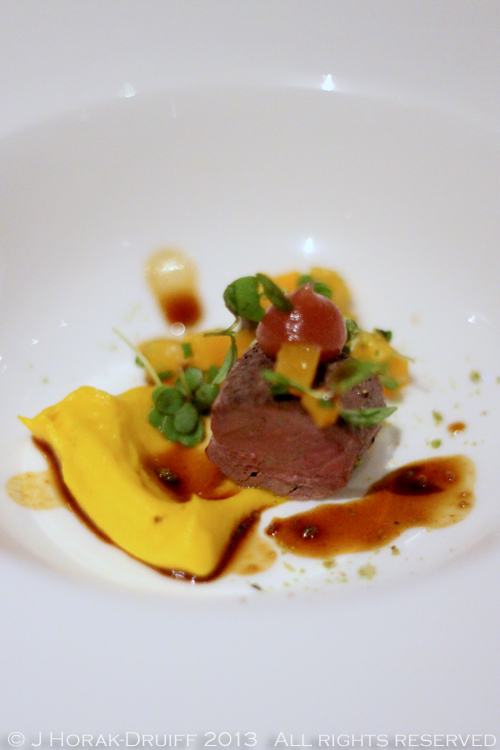 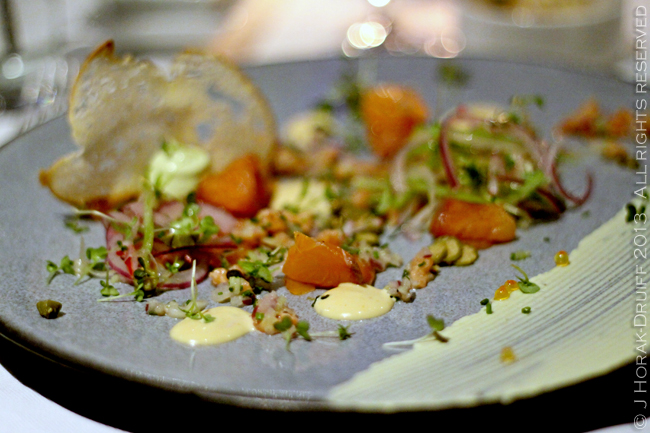 Excellent bread with olive oil for dipping was followed by an amuse bouche of Springbok loin and vibrant, golden sweet potato puree – a lovely sweet contrast with the peppery meat.  For my starter I chose the Norwegian salmon (R85.00) which consisted of citrus-cured salmon ceviche, green goddess dressing, red onion and fennel salad, miso mayonnaise and a shard of crisp olive ciabatta.  I loved how this appeared to be casually strewn across the plate, but with the attention to detail evident en every artful blob of mayo.  Taste-wise, it was wonderful – oily,  rich salmon balanced by tangy citrus  and crisp ciabatta, with the miso mayonnaise adding an umami kick.  I neglected to write down what Nick’s first course was but if memory serves, it was pork three ways with apple and mustard.  Despite the rather feminine, pretty plating, this was a plate full of butch flavours as pork was served in the form of a coarse-textured terrine; rillettes; and paté, paired with slivers of crisp Granny Smith apple and blobs of mustard mayo and apple jelly.  Nick loved it. 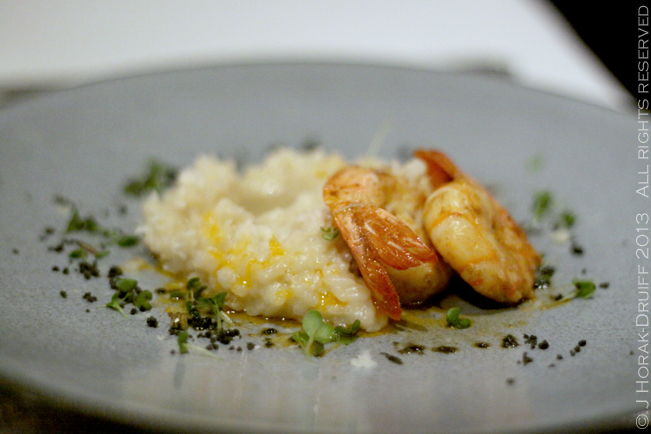 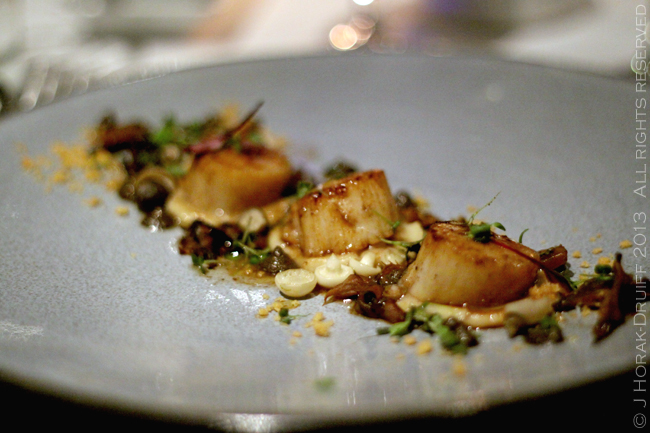 Next, I had the prawn risotto (R110.00) with clarified crayfish bisque.  The rice was mounded up to form a small well into which the clarified crayfish bisque had been poured, and topped with two grilled prawns.   This was probably the least impressive dish we had.  To be sure, the prawns were juicy and delicious, but the risotto was too dry and lacked real depth of flavour, while the clarified bisque, rather like clarified butter, was greasy without being particularly flavoursome. Also, considering the price of rice, it seemed hard to justify the price tag here, or the mean portion of risotto. Far better were Nick’s s scallops (R140.00) which came nestled on a bed of creamed celeriac, soy marinated shiitake with white shimeji with a soy truffle vinaigrette. I loved the arrangement on the plate and Nick loved the juicy scallops – but what we both swooned over were the fantastic marinated mushrooms.  A wonderfully delicate yet earthy plate. This was followed by a palate-cleanser served with flair in a neat bit of table theatre.  Two spheres of very good raspberry sorbet were brought to the table together with a small jug into which our water poured a liquid to activate the dry ice in the jug, creating this rather fetching icy tableau on our table.  No, there was no culinary need for it.  Yes, I still thought it was pretty cool! 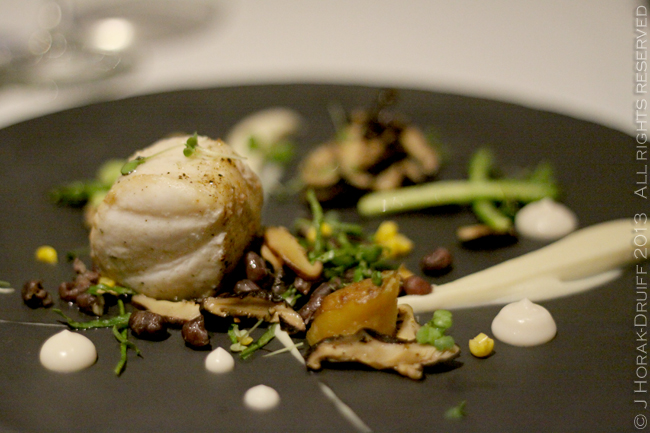 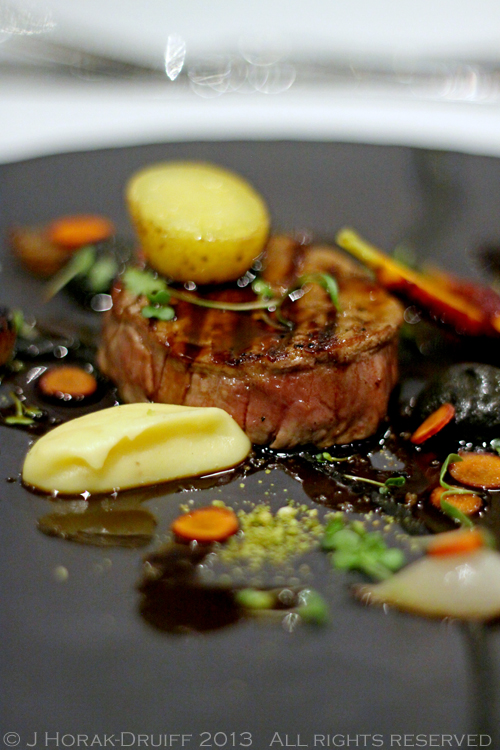 Things got back on track with the next course.   I chose the Cape Fish du jour (R165.00) which came with white asparagus, porcini mushrooms, cauliflower purée and smoked potato.  Sadly, I managed not to write down what the fish was, but it may have been Cape Salmon? In any event, the firm white fish flaked into perfectly cooked translucent flakes at the touch of a fork and made a subtly delicious partner for the smoky potato and rich cauliflower puree.  An indulgent yet surprisingly light dish – and the intricate plating once more intrigued me.  Carnivore Nick chose the beef fillet (R165.00) which came with black eggplant, white carrot and roasted onion purée and variation of carrot and potato Nicola.  The beef was juicy and pink but the highlight was the black eggplant – a deeply smoky charred eggplant puree that blew us both away.  Bonus points also for the darling little carrot coins and roasted onion puree adding a touch of sweetness. 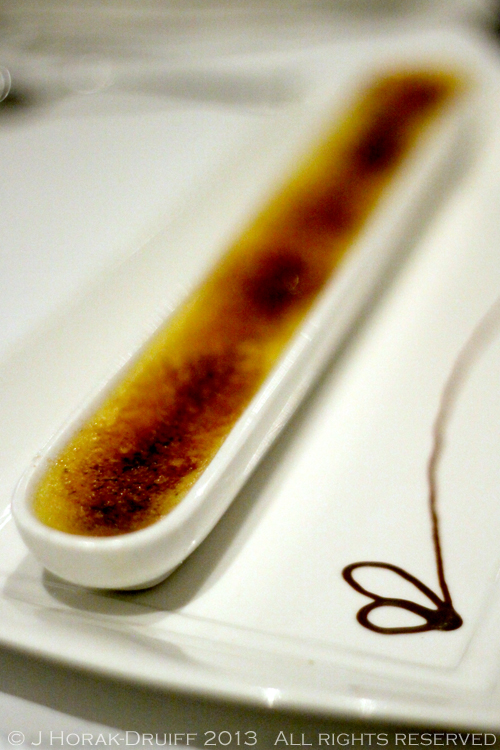 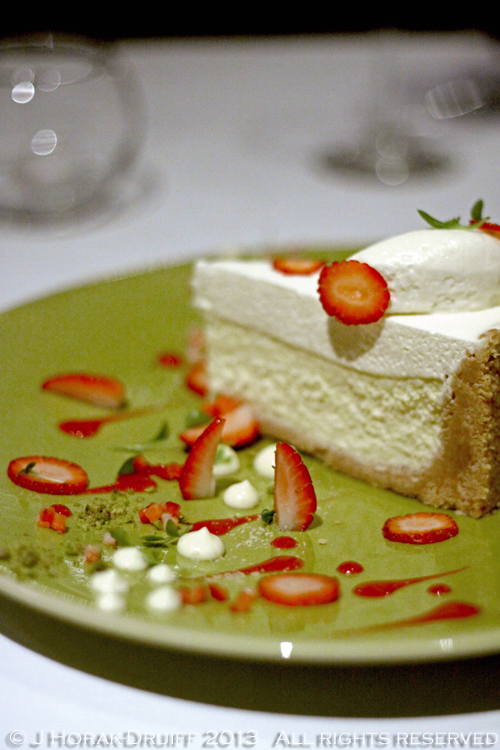 Nick is not much of a dessert person, but our charming waiter persuaded him to try the crème brûlée (R75.00).  Rather than being served in a traditional ramekin, this was served in an elegant long, thin dish which provided a major advantage:  a higher crunchy-caramel-topping-to-custard ratio! Having tasted it in London, I was keen to sample Bea’s Cheese Cake (R90.00) again, with its crème fraîche topping, strawberry syrup and fresh strawberries.  From my London experience I knew that it would be tasty… but nothing prepared me for the sheer whimsical prettiness of the plating!  The slice of cake itself sad on a green plate amidst shards and impossibly thin slices of strawberry that resembled nothing as much as red flower petals scattered across a green lawn by a summer breeze.  To say I was enchanted would be an understatement. And the cheesecake was as unctuously rich and decadent as it had been in London! To finish the evening, together with our coffee we were served an exquisite plate of sweet morsels, including lemon mini macarons, passion fruit jellies and chunks of lemon shortbread, all in shades of yellow and beautifully plated. 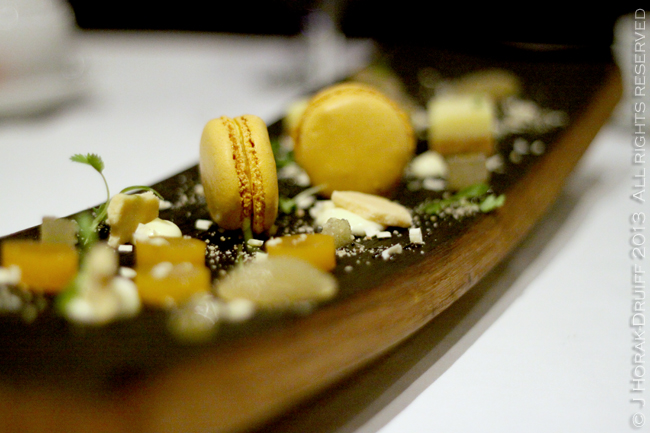 Since our visit, chef Henrico has sadly moved on to other projects, but I believe that his second-in-command Christo Pretorius (who came second in the prestigious Sunday Times Young Chef of the Year competition in 2012) is now the Executive Chef at Azure.  Having worked in the kitchen with Henrico for six months, I am sure that he will be keeping the culinary flag flying at Azure with equal gusto while putting his own stamp on the menu.  The meal would probably not have been to your taste if you are a meat-and-two-veg kinda person who equates value solely with volume, but if (like me) you believe that one eats with one’s eyes first, it was a sensory delight. At R425.00 for 4 courses or R495.00 for 5 courses, it’s not cheap in Rand terms but to be fair, you are sitting in a 5-star hotel.  And when you convert the prices to foreign currency (£27/$43 for 4 courses or £31/$50 for 5 courses) it becomes positively affordable.

To read about my two dining experiences at the Milestone Hotel (Red Carnation Hotels’ property in London), click on the links below:

DISCLOSURE:  I enjoyed this meal as a guest of Red Carnation Hotels but received no further remuneration to write this post and all opinions are my own.

Can anybody gaze up at St Paul's Cathedral and fai