You are here: Home / Recipes / Dairy-free / Salsa verde with green tomatoes and the illusion of control In New York City, as in most cities throughout the world, there are thousands of traffic lights at intersections with pedestrian crossings, all fitted with buttons for pedestrians to press so that the light will go green for them.  Hour after hour, day in and day out,  tens of thousands of pedestrians do in fact press these buttons and wait for the lights to change so that they can cross safely.  But in the late 1980s, New York City overhauled their traffic light system so that it became controlled and co-ordinated by centralised computer systems.  At the stroke of an administrative pen and the flick of a switch, all those buttons on the traffic lights were rendered obsolete.  And yet, every day thousands of people (even native New Yorkers who are perfectly aware of the automation) stand at the lights and push the buttons as they wait to cross.  It is as if the fact that they can push a button gives them a feeling of control over the amount of time that they wait, and that the wait is therefore less of a burden.

We human being love being in control, whether it’s in control of our emotions (nobody really *wants* to sob in public); in control of our children; in control of our finances; or simply in control of the television remote control.  Even when we are patently not in control, we tend to overestimate the amount of control that we have over a situation – and it’s a well-documented natural human tendency that has been named the illusion of control.   Ever seen those open and close buttons on underground train doors?  Ever tried pressing one?  You’ll find that the do nothing (the doors are – sensibly – controlled by the driver) – but damn, it makes you feel better because for a second you forget that you are in a metal tube a few dozen metres below the surface of the earth and feel in control of your environment.  Ditto the “close doors” button on elevators. On a positive note, patients who believe themselves to have control over their own capacity to get heal fare better than those who don’t. But unfortunately the illusion of control is  also what gives some stock market traders an inflated idea of their degree of control over the markets, leading to small inconveniences like the global financial crisis; or makes compulsive gamblers think that they can influence the outcome of a game of pure chance. Earlier this year, Mr Cooksister acquired an allotment.  It was a disheveled patch of earth covered liberally in stinging nettles and thorny brambles, and inches below the surface was a treasure trove of 100% authentic London trash – building rubble, shards of brown pottery jugs, mangled bits of metal – you name it. Let’s just say it was not prime agricultural land.  But, armed only with a spade, a pickaxe, a hoe and a strimmer, he set to work weekend after weekend and within a month, he had not only cleared the plot but also started digging neat rows of beds and planting seeds.  When I visited a month or so after that, I was just astonished at the order that he had wrought out of the chaos: rows of tomatoes rubbed shoulders with a bed of asparagus, which was bordered by two rows of squashes and so forth.  A small miracle.  Nick had assumed control of the situation and all was well in the world.  But as every farmer will tell you, when it comes to growing things, control is an illusion.  Of course you can carefully prepare a bed, fertilise the soil, tend and water the plants – but you can’t control the weather. After a late start, this year’s summer was quite exceptional – hot and wonderful.  But in September it turned suddenly damp and rainy, providing the exact conditions in which tomato blight spores germinate.  Having had personal experience of blight in our own garden, Nick knew it was not a case of if tomato blight would strike, but rather when.  First came the unhappy yellow leaves, then the black spots on the foliage and finally the shrivelled patches on the fruit themselves. So much for control.

The end result was that probably about two thirds of our tomato crop had to be picked green and stored in  cardboard boxes in our conservatory in the hope of ripening them. Surprisingly, tomatoes ripen rather well on the vine in dark, dry cardboard boxes, but we still had far more tomatoes than we could use.  Some of the green tomatoes went into my spicy green tomato and apple chutney but we had to find another way of using the remainder.  A meal at a Mexican restaurant a couple of weeks ago sparked an idea – why not salsa verde?  Traditionally, this is made with tomatillos, but the high acid and tart flavour of green tomatoes make them a perfectly acceptable substitute.  The recipe Nick used was a slightly tweaked version of this one, and it was a learning curve in terms of the canning process – but in the end it was less complicated than I feared and it means that now we have 8 jars of salsa verde in the pantry to enjoy all year round.  Phew – the illusion of control is restored! 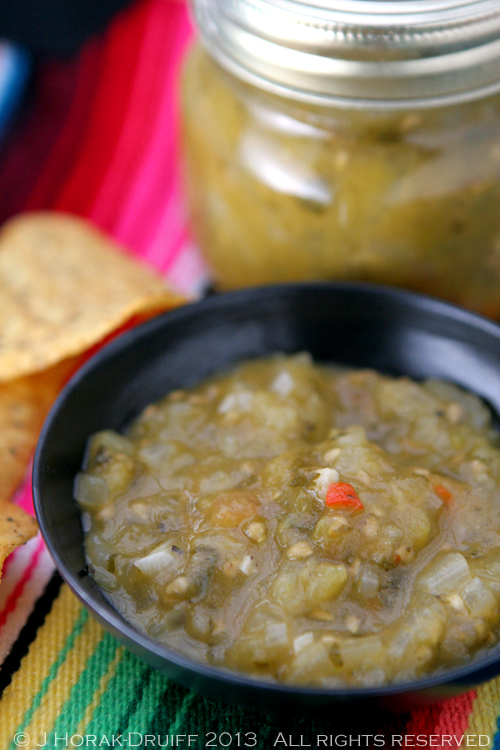 More ideas for using up your green tomatoes include: