You are here: Home / Restaurants / London restaurants / Afternoon tea at the Milestone Hotel 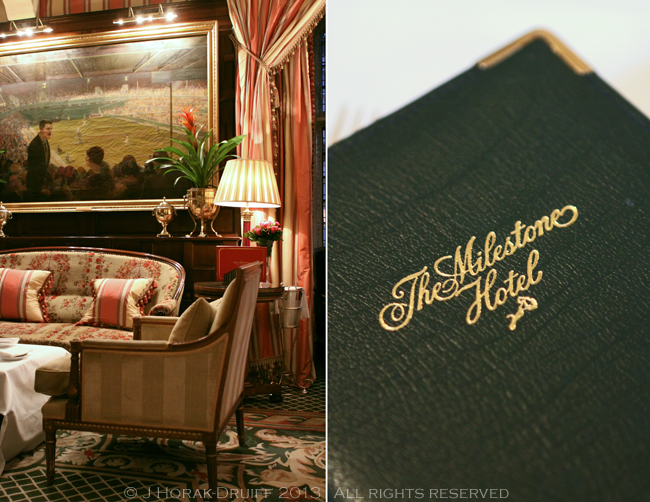 So these days, if you are an immigrant who wants to become British, you can’t just show up, attempt to fit in, and hope they don’t put you on the next boat home.  You also need to  do some studying from a Government-issue book on “Life in the British Isles” or a similarly racy title.  It’s full of worthy historical and social facts, as well as tips on how to get your kid into a school or claim housing benefits, and at the end of it all you take a test to ascertain whether you are British enough to join the maroon passport club.  But to my mind the true test of whether you are British enough lies not in this book, but in the reverence with which you treat tea.

If  you want to see a British friend  break into a beatific grin, just offer him a cup of tea.  The beverage is drunk rain or shine, in heat and cold, by young and old, in rich and poor houses across the British Isles.  It is an elixir that cures not only thirst but a host of ills, and it is the beverage that the Brits have chosen to immortalise in the ritual of Afternoon Tea.  On the face of it, this would simply seem to mean tea served at some indeterminate point between lunch and dinner, but over the years it has acquired a fairly precise timing (4pm) and a myriad of rituals.  For instance, tea should be poured from a silver teapot rather than made in mugs; there should be a cake stand and delicate china; and both savoury as well as sweet snacks are served – which really should include cucumber sandwiches and scones with jam and cream.  It is the epitome of traditional upper class Britishness – so what better place to enjoy it than at a hotel which embodies similar values?

The Milestone Hotel is one of the Red Carnation group of hotels, a collection of fourteen award-winning luxury  family owned and run boutique hotels, located in the UK, South Africa, Switzerland and the USA. The group was founded by South African-born Bea Tollman and her husband  and has since the mid 1970s established a reputation for timeless décor, exceptional locations, highly personal and genuine guest care, and celebrated cuisine. The Milestone Hotel, located on a prime patch of real estate across the road from Kensington Palace gardens, is a beautifully ornate 19th century red brick building which is  consistently rated as London’s most outstanding five star luxury boutique hotel, as well as a string of other awards.  Stepping into the Park Lounge where tea is served is like stepping  into an aged, wealthy relative’s country manor.  The room is warmly inviting with twinkly silverware, squishy chintzy sofas and a fire gently flickering in a huge stone fireplace. Can there be a better way to spend a rainy late winter afternoon? 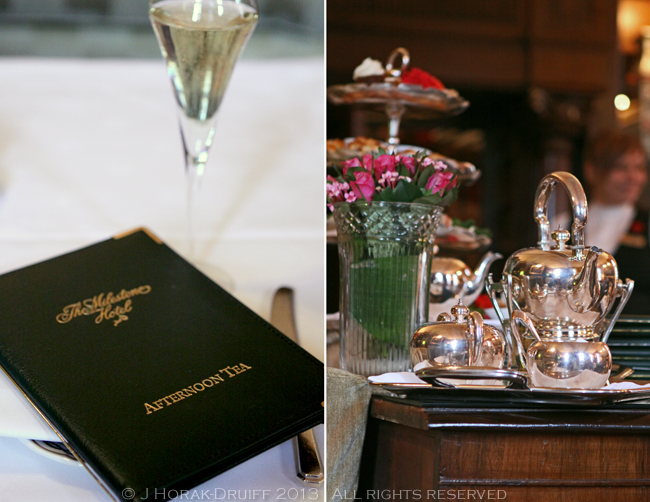 The Milestone Hotel is a member of  The Tea Guild, which is a prestigious and unique organisation that represents establishments dedicated to brewing and serving tea to the high standards desired by the United Kingdom Tea Council. The have also received a special ‘Award of Excellence’ from the UK Tea Council in recognition of outstanding quality and consistently high standards of tea service, so you know you are in for a treat. There are various tea packages on offer, including the traditional afternoon tea (finger sandwiches, pastries, scones and tea); the chocolate afternoon tea (featuring chocolate brownies, chocolate scones and a chocolate fondue  served with strawberries, coconut marshmallows and doughnuts); the Royal afternoon tea (featuring some of  the Queen’s favourite teatime treats); and various champagne teas (the traditional tea with the addition of champagne).  Vegetarian and gluten-free options are also available on request, and there is a special tea menu for children which includes a visit to the pastry kitchens to decorate their own cupcakes. Tempting as though they all seemed, we chose the champagne afternoon tea.  From the 12 teas available on the menu, I selected second flush Darjeeling which more than lived up to its description of being fine,  floral and delicately-flavoured. 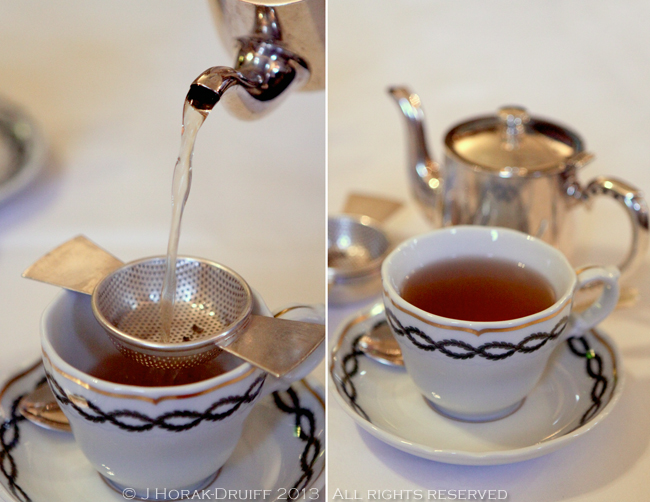 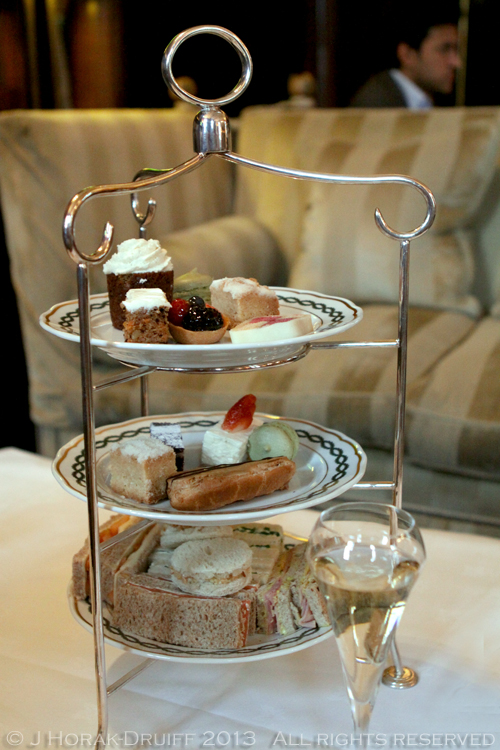 The impressive cake stand that soon arrived was groaning under the weight of sweet and savoury treats and after expertly pouring our tea, the waiter patiently explained each item to us. Working from the bottom up, we decided to start with the savoury finger sandwiches. Some afternoon teas that I have been to seem to have made and cut their sandwiches a few hours in advance, with the result that they have developed that slight crust of dryness around the edges by the time they are served to you – but here there was none of that in evidence.  All the sandwiches tasted as if they had been spread and sliced ruler-straight only moments before.  On offer were smoked Scottish salmon and cream cheese;  free-range egg mayonnaise and Hampshire watercress; roast ham and English mustard; Mull of Kintyre Cheddar and tomato; cucumber; and chicken mayonnaise with toasted chopped almonds on a selection of white and wholewheat bread. All were excellent, but in particular I was smitten by the exceedingly flavourful egg and cress sandwiches; the tangy umami-rich ham and mustard; and my all-time favourite, the chicken mayonnaise (I think it was the flavour and crunch of the toasted chopped almonds that did it for me!).  Sandwich perfection. 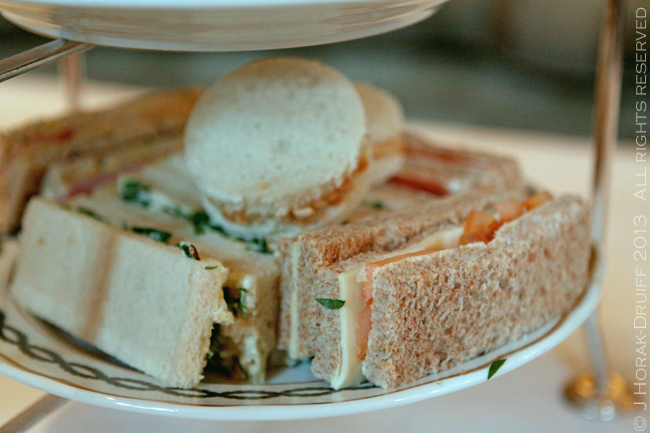 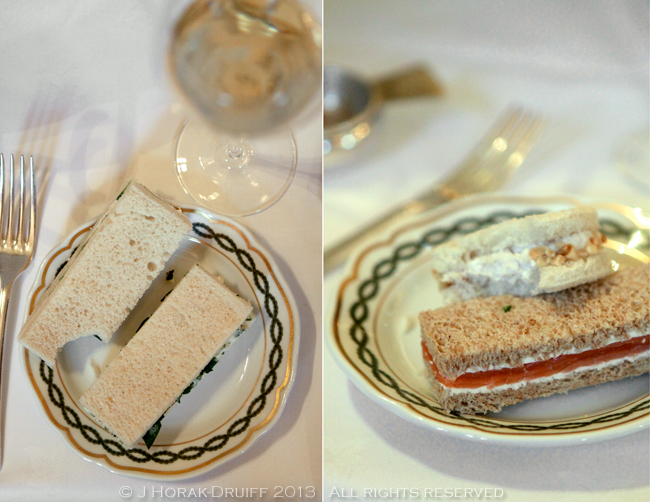 Up next, we tackled the pastry selection which included: a slice of baked American-style cheesecake topped with fresh strawberries (just as impressively delicious as it had been when I tried it at the adjacent Cheneston’s restaurant);  a nutty, dense chocolate brownie; a honey sponge cupcake; a pistachio macaron; a slice of Battenberg cake; two squares of shortbread; a jewel-like  glazed fruit tartlet; a moist slice of carrot cake; and a coffee eclair. My all-out favourite was the eclair with its feather-light choux shell and oh-so-decadent but not too sweet cream filling; followed by the carrot cake and the cheesecake.  The only real disappointment was the shortbread which had been overbaked and was disappointingly rock hard, rather than dissolving into buttery crumbs at the first nibble.  But there were plenty of other things to enjoy in our pastry selection. 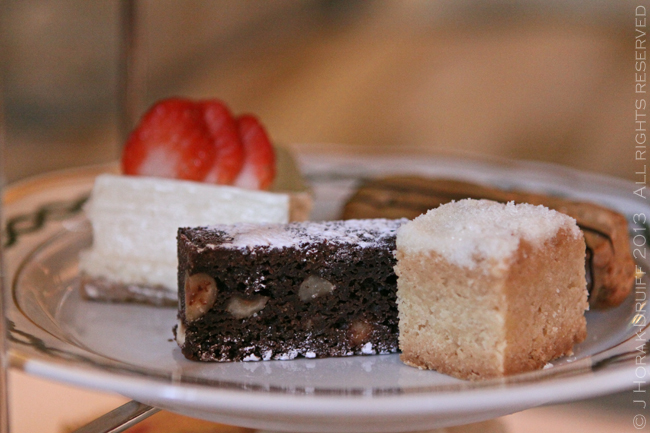 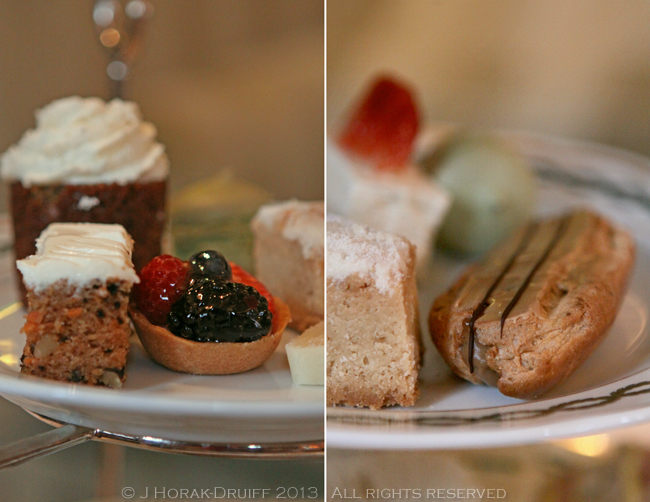 As Ailbhe and I are both scone fans, we had saved our favourites for last, and I must say that the scones were textbook scone perfection: beautifully glazed tops, and an interior that struck the perfect balance between pillowy and crumbly,  The accompanying strawberry jam was excellent, although the cream lacked the decadent crustiness that I usually associate with clotted cream, but was still thick and satisfyingly artery-clogging.  But the best surprise came last. When I had visited the hotel previously to dine at Chenestons, my entire table had fallen head over heels in love with the little pat of truffle butter served with bread – I had waxed lyrical about it on Twitter for ages afterwards.  And so this time the kitchen had decided to present us with a little surprise bonus: a savoury muffin and a giant pat of truffle butter each. Oh happy day!   I love savoury scones anyway, but add a generous smear of truffle butter and that’s me in heaven. Decadence at its most delicious. 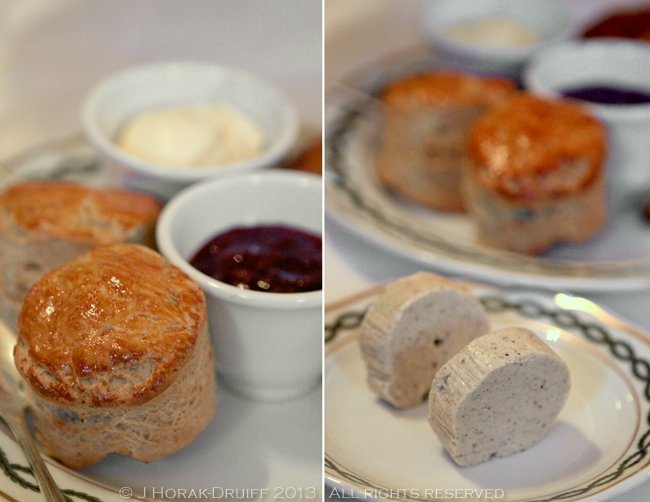 Our Champagne afternoon tea tea cost £45 per person ( the traditional tea without champagne is £36.50 and tea for children under 12 is £12.50) which I think is pretty good value for money compared to other top London hotels like the Ritz, the Lanesborough and the Savoy.  Both of us certainly left feeling very well-fed and content, having been pampered for a couple of hours.  The only slight niggle is that there are two sittings for afternoon tea (3pm and 5pm) and so instead of reclining on our sofa indefinitely we had to make way sharpish for the 5pm sitting.  But you can always do as we did and retire to the hotel’s Stables Bar for a restorative gin and tonic.

Liked: the squishy sofas, the excellent sandwiches, the service
Disliked: the 2-hour table limit
In a nutshell: A wonderful way to while away a rainy afternoon, sipping champagne by a crackling log fire.
Wow factor out of 10: 8

DISCLAIMER:  I enjoyed this meal as a guest of the Red Carnation Group but received no remuneration other than the meal.  All opinions are my own.