You are here: Home / Travel / France / Visiting the Vaucluse – a wine blending workshop at Lavau 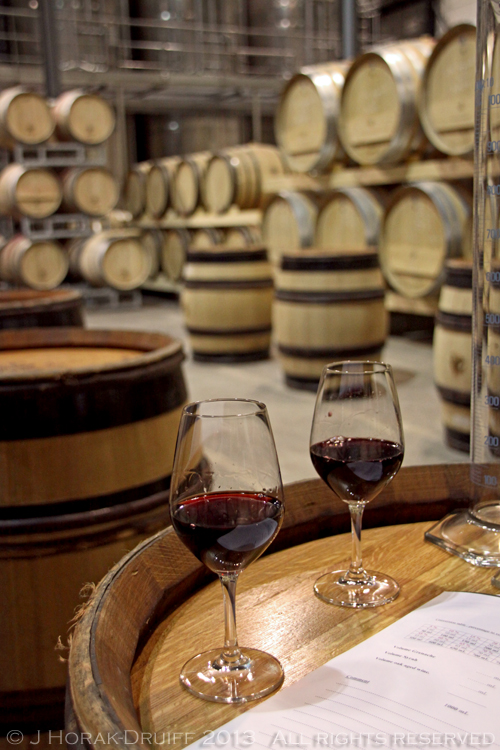 The story so far:  After a long drive from London, we had finally arrived in northern Provence, spending our first afternoon exploring the lovely Coustellet farmer’s market.  Our next stop was the hilltop village of Menerbes where we enjoyed a truffle-tastic lunch at the Maison de la Truffe et du Vin; followed by a visit to the Ochre Conservatory in Rousillon.  From there we drove on to another picturesque hilltop village, Bonnieux, where we enjoyed a candle-lit tasting dinner by chef Edouard Loubet.   The following morning we joined one of Edouard Loubet’s chefs for a cooking course in the Bastide de Capelongue kitchens, followed by a stellar lunch.  That evening we found ourselves at the dreamy Chateau de Mazan for a cherry-themed dinner.  The following morning we enjoyed a tour of the Terraventoux vineyards on electric bicycles, with plenty of stops for sampling local food and wine. Now read on…

Much as we could have stayed and explored the Terraventoux vineyards all day, we had other appointments to keep – at least the fact that they also involved wine made the parting from Terraventoux less of a wrench!  Our next stop was Violès, a village in the upper Vaucluse in the shadow of the impressively toothy Dentelles de Montmirail peaks.  If you superimpose the map of French wine regions over the normal road map, you will see that our route took us firmly into the Côtes du Rhône wine producing area, one of my favourite French regions for red wine.  Our destination was the winery of Maison Lavau where the Lavau family decided to settle 40 years ago, after previously making wine in places as diverse as Bordeaux and Tunisia.  Today, the family own 3 cellars in the south of the Rhône Valley, where they are in partnership with 300 grape growers. This means that they vinify grapes from most of the appellations of the southern Rhône valley, from Côtes du Ventoux to the Côtes du Rhône, including cru’s such as Vacqueyras, Gigondas and Chateauneuf du Pape. 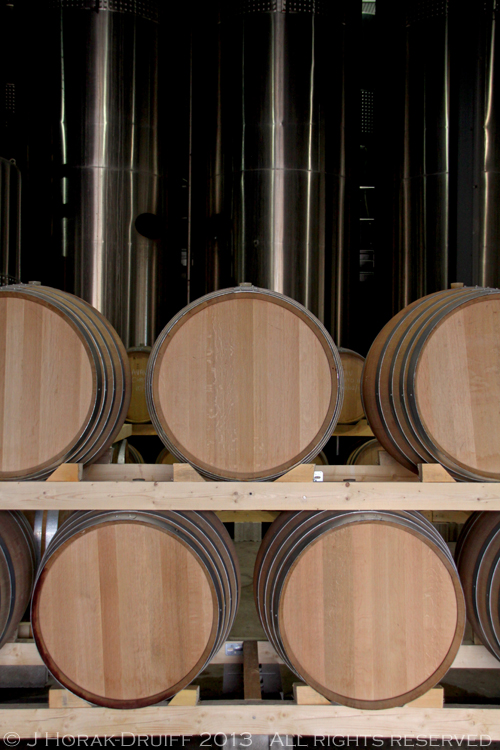 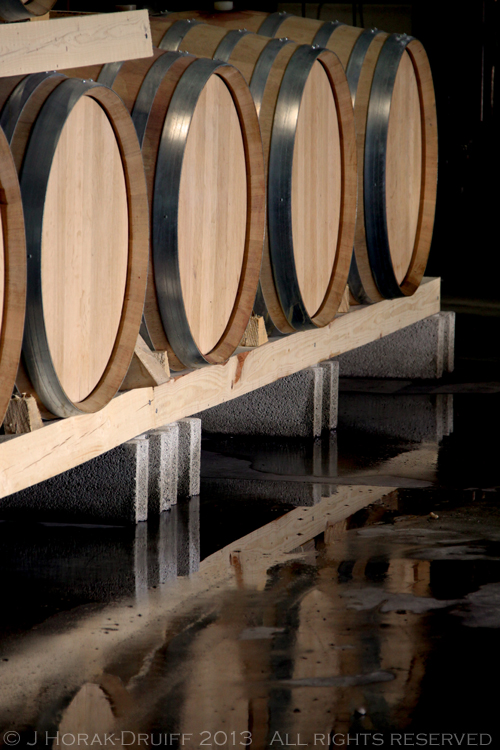 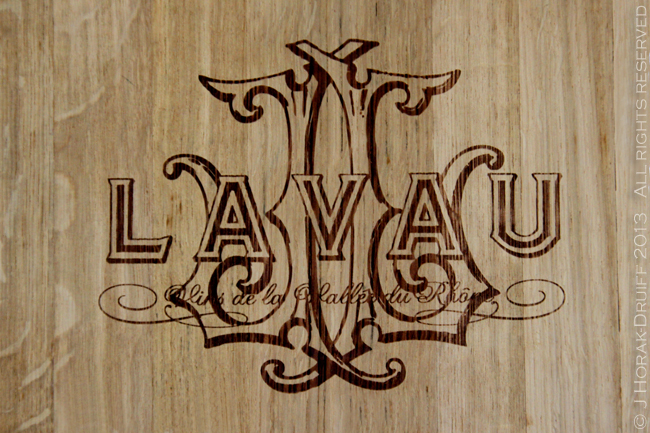 We were met by oenologist Aurélie who told us a little about the history of the Lavau and then took us on a tour of the hugely impressive modern winery – evidently a lot of money has been spent here as everything is new, modern and gleaming.  In the tank cellar, Aurélie explained that the winery had been built on multiple levels and the winery had invested in gravity flow winemaking, meaning that neither the grapes nor the wine are ever moved by pumps, which might bruise them. Instead, the multiple levels of the winery buildings exploit the force of gravity to softly move grapes and wine through the processing steps. For example, when the wine is ready to leave the stainless steel fermentation tanks, the liquid is simply allowed to run from the bottom of the tank, below the skin cap, into oak barrels using the force of gravity. 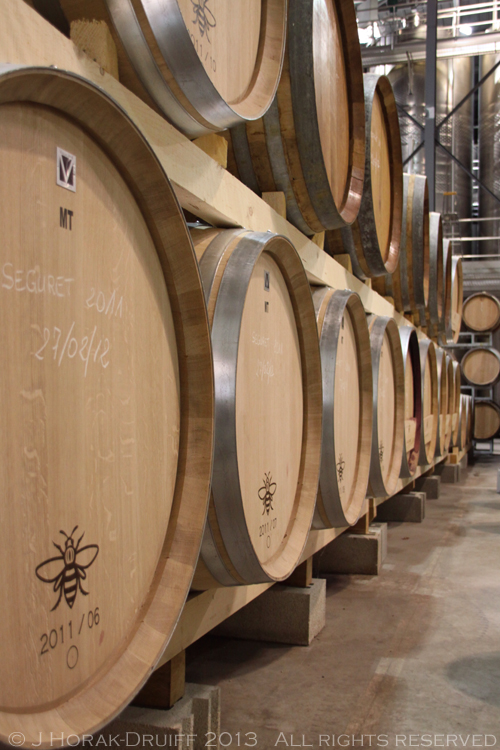 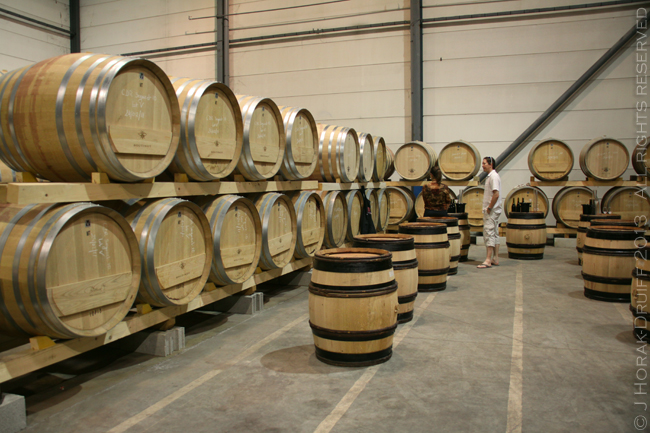 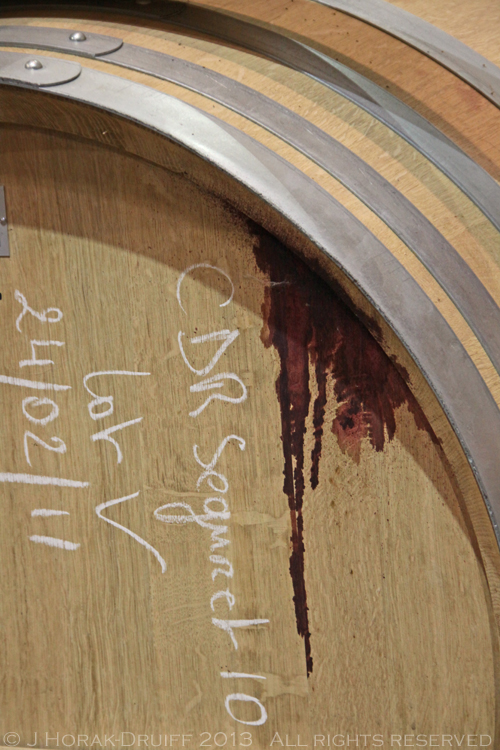 From the gleaming hall of steel tanks we moved on to the barrel maturation cellar, smelling of sweet oak and red wine – a happy combination if ever I smelt one!  This was where we would be let loose to blend our own wines.  After we had donned aprons and each been assigned to a “work station” (an upturned oak barrel containing a 100ml and 1000ml test tube, a funnel, 3 bottles of wine, and paper for taking notes).  Aurélie explained that almost all the grapes that they vinify at Lavau go in to blended wines and that the art of the blender is to balance the competing attributes of the component base wines – a little fruit from this one, a little roundness from that one, a little tannin from another.  The end result should not only be balanced and representative of the particular appelation and terroir, but also consistent year on year.  In this particular appelation, the restriction on red wine is that it must contain a minimum of 40% Grenache, so in front of us on the blending table were 3 bottles:   one unwooded 100% Grenache; one unwooded 100% Syrah; and a bottle of 50-50 Syrah and Grenache that had been matured in oak barrels.  Our task? To play around with various blends in the little 100ml test tube, bearing in mind the 40% Grenache rule. Simple! 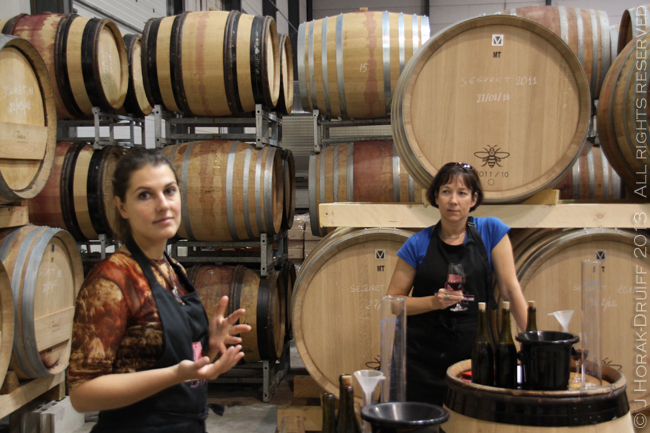 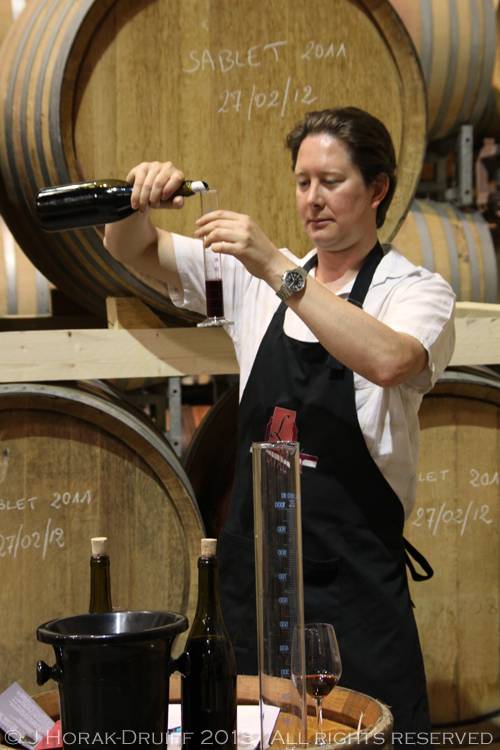 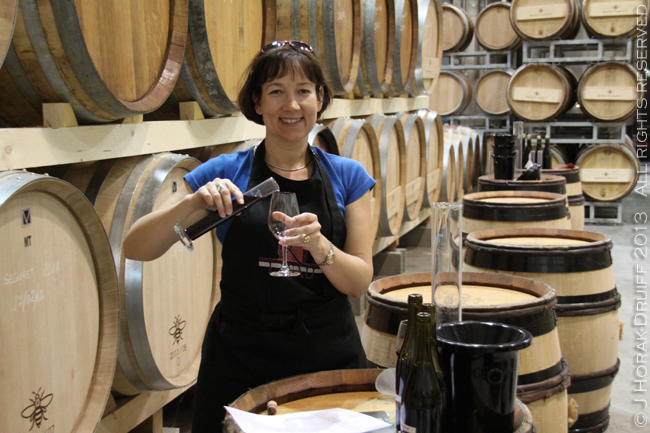 It’s amazing how competitive I can get when given a mission – even Nick was shooed away each time he approached my table to try my blend – nobody was going to steal my super-secret blending recipes!  It was great fun feeling like some sort of boozy mad scientist, trying out the different blends and tasting each one.  My three attempts were:

And once you have tried your various blends and chosen your favourite, you replicate that blend on a larger scale using the 1000ml test tube.  The wine is then bottled and corked for you, after which you can add your own label and take it home as a keepsake.  It’s a fascinating insight into the importance of wine blending, and a wonderfully engaging activity both for leisure or for a teambuilding event.   From there, we retired to the very modern and airy Lavau tasting room and wine sales area where wines from all 15 private vineyards that Lavau vinifies are available for sale (and most of them also for tasting). Wines range in price from a basic Syrah at €4.50 for 750ml to their Chateauneuf du Pape blend at €18.90 (we were particularly taken by their Gigondas at €11.90).  Also available is their sparkling Quintessence at €8.90 per bottle and a bargain 5 litre bag-in-a-box Côtes du Rhône red for €16.

It had been a hugely enjoyable afternoon – Aurélie was knowledgeable and approachable and the idea of having a blending workshop is inspired. It’s the perfect blend of education and entertainment and taking home a bottle of “your” wine is one of the best souvenirs I’ve ever received.

Stay tuned for the next instalment, in which we have a dinner washed down with Chateauneuf du Pape wines and spend the night within sight of their vineyards.

By plane: The nearest airports are Avignon (20 miles) and Nîmes (60 miles).  By train: Avignon station is the nearest large station, served by the TGV Méditerranée.

The Vaucluse Tourist Board has more information on their website about the upper Vaucluse region and its attractions, as well as a selection of wine-themed activities and weekends throughout the Vaucluse region.

DISCLOSURE: I visited Maison Lavau as part of a self-drive trip that was partially funded by the Vaucluse Tourist Board, and the workshop was  paid for by the tourist board.  I received no remuneration for the trip other than food, wine and accommodation and all opinions are my own

Other posts in my Vaucluse series include: