One of the things that puts many English-speakers off learning another language is the annoying habit that our European neighbours have of giving nouns a gender.  There seems to be no rhyme or reason why a chair should be feminine and a poem masculine; or indeed why a table should be feminine in French (table), masculine in German (Tisch), and neuter in Norwegian (bord).  Restaurants, on the other hand, are far easier to identify as being of a specific gender.  A place like Mari Vanna could only be feminine, with its crochet doillies and knick knacks; whereas the Blue Boar Smokehouse could only ever be described as distinctively masculine.  Situated in the Westminster Intercontinental Hotel and named after the Blue Boar’s Head, an inn that served the workers of Westminster for more than 600 years, the Blue Boar interior is all dark wood, leather banquettes and Anglo-American-style butchness.  The bar boasts the odd clubby tartan tub chair and a secluded seating area full of Chesterfield sofas; while dramatic lighting, lamps with what appear to be vintage telescope tripod legs and a line of stylised metal boar’s heads along one wall complete the picture in the dining room. According to the blurb, the restaurant uses techniques perfected by American pit masters (charcoal ovens, slow cooking, smoking, rubs and marinades) and applies them to the best of British produce to  takes influences of the Blue Boar techniques used by American Pit Masters using charcoal wood ovens, slow cooking, smoking rubs and marinades to celebrate the finest British produce. So as a huge fan of American style barbecue, I was keen to sample what was on offer when I recently visited for a Sunday brunch. 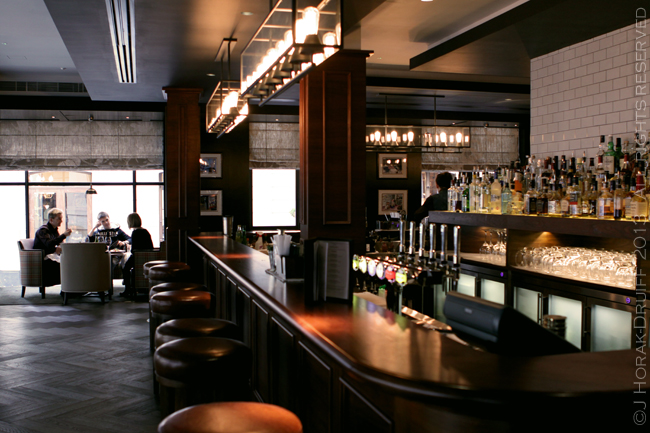 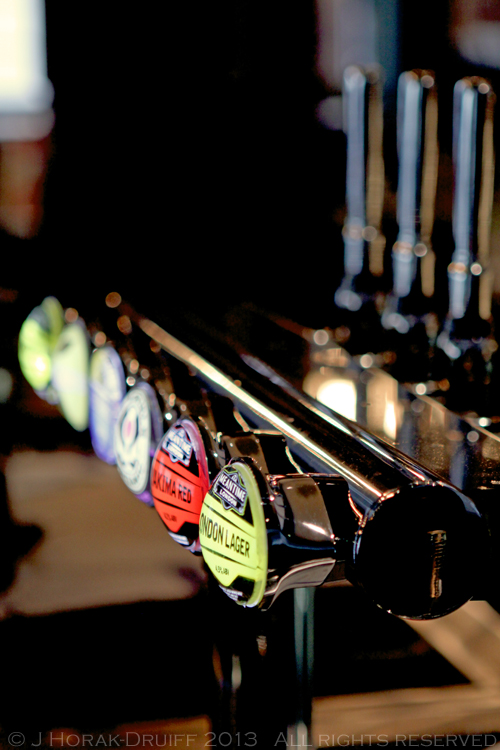 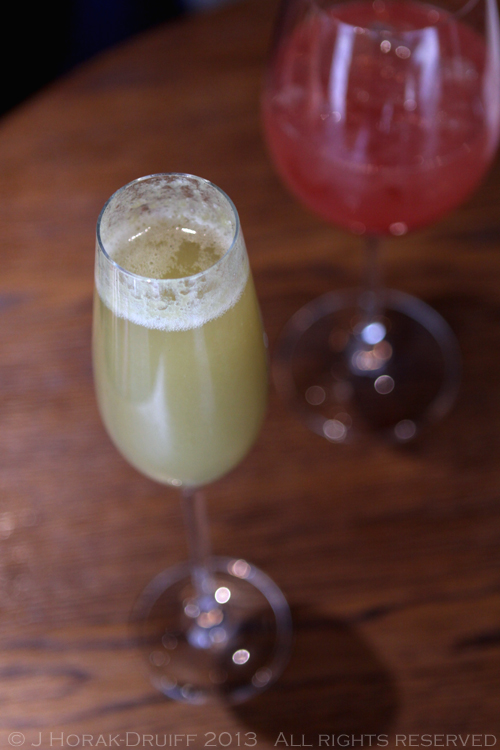 Looking at the menu though, my first thought was why they had decided to call the meal brunch – to me, brunch suggests at least a couple of breakfast-esque dishes – maybe some bacon, or eggs Benedict.  This menu starts with a salad bar and ends with desserts – nothing brunchy about it if you ask me… but any linguistic gripes were soon soothed by the promise of cocktails in the bar with Louis and Cassie while we waited for Michelle. The bar menu features a selection of ales, bottled beers and wine together with a good choice of premium whiskies, antique gins and (of course!) cocktails ranging from the classic (elderflower and champagne) to the modern (pomegranate gingertini). Mine was a delicious and refreshing champagne julep, but Cassie was less fortunate – the hapless barman could not prise the lid off the cocktail shaker and ten minutes or more later she was still waiting.  Profuse apologies helped, but were no substitute for a cocktail and you’d hope a five-star hotel had more than one shaker to choose from.

From there we were taken through to the dining room for our brunch, where guests are greeted by the super-impressive sight of the dessert buffet, glowing like some sort of sleek, sweet Starship Enterprise and groaning under the weight of nearly twenty desserts. If you are the kind of person who checks out the dessert section of the menu before you order your main course, you will be happy. Tables were of a good size and reasonably well spaced for central London.  The low partitions dividing the room also enhanced a feeling of clubby cosiness in what would otherwise be a large and soulless hotel dining room. Whereas the usual menu is a full a la carte menu, on Sundays the brunch deal allows you unlimited access to the salad bar (which also includes seafood and cold meats), followed by a choice of main from a limited menu, and then unlimited access to the dessert bar, all washed down with unlimited bloody Marys and Bucks Fizz. The salad bar is very attractively laid out with individual glass bowls of salad perched on black pedestals, dramatically lit with spotlights – but the single spoons provided to serve with are woefully inadequate, particularly if you are clutching a plate in one hand – at least one spoonful of salad ended up on my shoes rather than my plate.   Surely tongs would be far more appropriate?  Serving issues aside, the salads were excellent – from the DIY Caesar salad station to the smoked feta cheese with shaved fennel, pomegranate & pistachios; the chard, sweetcorn & rocket salad with a chilli lime dressing; and my personal favourite of Granny Smith apple slivers with succulent smoked chicken in a creme fraiche dressing.  There were abundant oysters and Atlantic prawns on the raw bar, neither of which I tried, but I did have delicious mini prawn cocktail in a creamy Marie Rose dressing. From the cold meat selection, I tried the little cubes of pig’s head terrine (a good meaty flavour) and the venison pastrami (sadly hopelessly over-salted). For my main course, I could not resist the lure of the pulled pork served with thyme baked rolls, homemade pickles, coleslaw and smoky bacon baked beans.  Elsewhere at the table, our party also ordered the sustainable sea bass with preserved lemon, samphire and fennel; and a rib-eye steak. The pulled pork was correctly shredded and fork-tender, but disappointingly dry and lacking in the lashings of barbecue sauce that have usually accompanied the dish in other restaurants where I’ve eaten it.  The accompanying thyme rolls and slaw were good and the smoky baked beans outstanding, but overall the dish was not as stellar as you’d expect from a place specialising in barbecue.  The sea bass was served whole but was somewhat dry – I did like the accompanying samphire and fennel though.  Michelle’s steak looked a little lonely on the plate with only two tomato halves for company so we ordered some side dishes.  The chunky chips were excellent, but the plate of greens (broccoli, cabbage and beans) were overcooked, underseasoned and uninspiring. 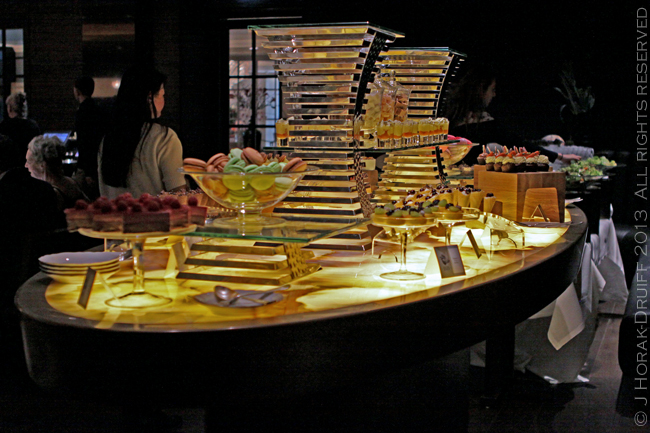 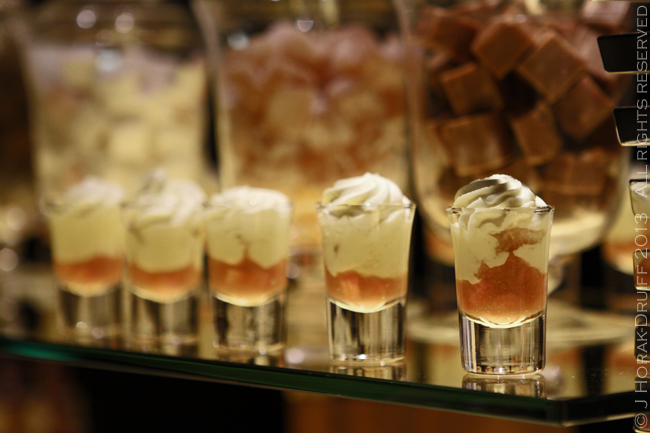 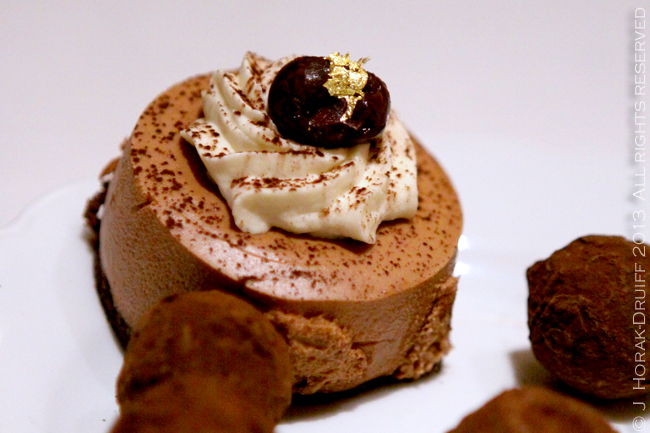 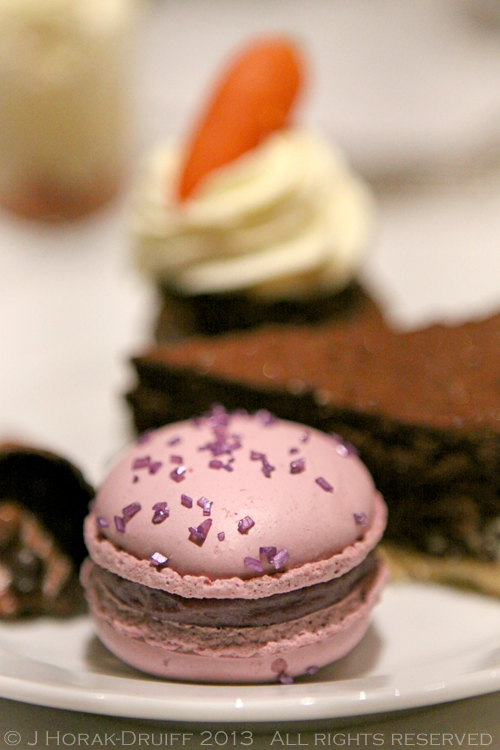 From there, we moved on to the table that had been tempting us since we walked in:  the dessert buffet.  The selection here was vast: mini lemon meringue tarts, exuberantly pink and purple macarons, miniature chocolate mousse cones, beautifully decorated carrot cupcakes, apple clafoutis, chocolate raspberry slices,  shot glasses of rhubarb fool, fruit tartlets, tarte au chocolat,  Black Forest mousse, and huge glass jars of sweets including rather wonderful salted caramel truffles.  Between the four of us I think we managed to sample most of these – I was particularly smitten with the decadent chocolate tart and cones;  the carrot cupcakes; and the salted caramel truffles. Most disappointing to me were the macarons whose bland flavour and over-dry texture did not match up to the promise of their appearance.

As mentioned, the Sunday brunch includes unlimited Bloody Mary’s and Buckz Fizz – I only tried the latter and found it to be a bit light on the wine – but perhaps this is not a bad idea, considering most people have to work the following day! Coffee and a selection of teas are also included and I fell in love with the boar-topped silver teapot .  For the price of £35 per person, I thought the meal was pretty good value – it’s a wonderfully central location and even if the mains were lacklustre, you could go crazy on salads, prawns and oysters (and of course the dessert smorgasbord) and still get your money’s worth quite easily.  On the basis that fixed price buffet specials seldom show off a restaurant to best advantage, I am also curious to go back to try the a la carte menu, which includes pulled lamb as well as classics like baby back ribs and hush puppies. For a couple of other perspectives on our meal see Cassie’s review and Michelle’s review.

Liked: the impressive dessert buffet, the salads
Disliked: the impractical salad servers, the lacklustre main courses
In a nutshell: Good value if you want to fill up on unlimited prawns, oysters and desserts – and Bloody Marys/Bucks Fizz.
Wow factor out of 10: 6

DISCLOSURE:  I enjoyed this meal as a guest of the Blue Boar Smokehouse but received no other remuneration to write this post and all opinions are my own.