You are here: Home / Travel / France / Visiting the Vaucluse – a cycle tour of the Terraventoux vineyards The story so far:  After a long drive from London, we had finally arrived in northern Provence, spending our first afternoon exploring the lovely Coustellet farmer’s market.  Our next stop was the hilltop village of Menerbes where we enjoyed a truffle-tastic lunch at the Maison de la Truffe et du Vin; followed by a visit to the Ochre Conservatory in Rousillon.  From there we drove on to another picturesque hilltop village, Bonnieux, where we enjoyed a candle-lit tasting dinner by chef Edouard Loubet.   The following morning we joined one of Edouard Loubet’s chefs for a cooking course in the Bastide de Capelongue kitchens, followed by a stellar lunch.  That evening we found ourselves at the dreamy Chateau de Mazan for a cherry-themed dinner. Now read on…

It was with a heavy heart that we left our gorgeous airy room at the Chateau de Mazan on a sunny morning, full of good coffee, fresh baguette and spectacular cherry jam – but we had a full day ahead of us and an appointment to meet a man with a bike.  Our journey took us to Mormoiron and the Terraventoux vineyards.  Terraventoux was born in 2003 out of the merger of two existing local co-operatives:  Les Roches Blanches in Mormoiron and La Montagne Rouge in Villes Sur Auzon.  Whereas these co-operatives had previously sold their wine to other cellars rather than bottling it themselves, Terraventoux embarked on a campaign of improving plantings and viticulture, and started bottling quality wines under the Terraventoux label.  The TerraVentoux winery produces red, rosé and white A.O.C. Ventoux wines – and in an area with an exceptional 2,700 hours of sunshine per year, you know they are going to be approachable, boldly fruity wines! 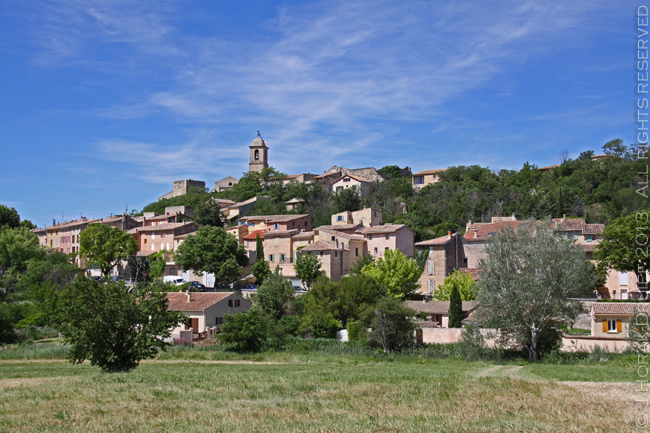 The man we were off to meet was the charming and enthusiastic Gabriel who was to be our guide for the morning.  Gabriel manages the wine tourism side of the Terraventoux winery and leads all manner of themed walking and cycling tours through the vineyards.  The plan was for Nick and I to ride electric bicycles provided by the vineyard along a planned route for about 2.5 hours, covering roughly 20 km and meeting up with Gabriel at various intervals, so that he could provide us with liquid and edible refreshments. However… as I may have mentioned before, I am the exception that disproves the saying “it’s just like riding a bicycle – you never forget”. Wrong.  You do forget over the course of 20 or more years. You also lose your sense of balance, your confidence and all the other skills that might help with bike riding.  So to prevent a disaster (!), I let Nick set off on a bike (as happy as a lark) while I traveled with Gabriel in his car.  Moving rapidly along…! 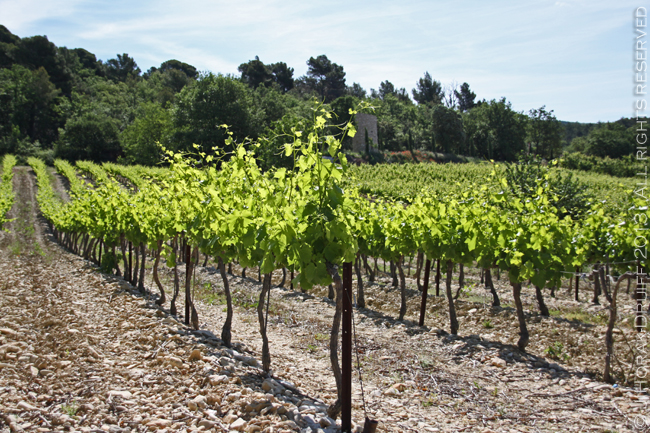 Spending time in the car with Gabriel was no bad thing – he proved to be a great source of local knowledge, explaining that the vineyards lie on the southern slopes of Mont Ventoux, an area that has been listed as a biosphere reserve by UNSECO since 1990.  For this reason, there is great awareness of ecological principles and biodiversity – rather than the endless stretches of monoculture that one finds in other farming regions, here a parcel of vineyards is usually sandwiched in between two ancient cherry orchards. As we drove past hilltop villages and rows of vines, he also explained that apart from Terraventoux’s 1,000 hectares covering 15% of the AOC Ventoux appellation, the estate also has a commitment to sustainable development.  This means that management are all trained to manage the estate in a way that preserves the environment, economic efficiency, and social fairness; and on tours such as the one we were on, Gabriel repeatedly made reference to the efforts that are being made to preserve biodiversity and to prevent villages from become ghost towns full of absentee owners. 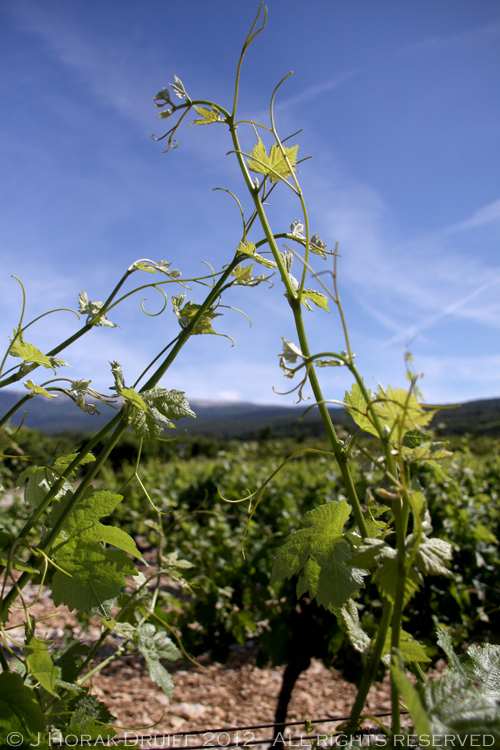 Our first stop of the day was in the nearby village of Flassan where Gabriel told us they are determined to keep their village alive, with a functioning school and shops, rather than allowing absentee owners to become the norm and thereby killing the vital community life. It is easy to see why you might arrive as a tourist and be tempted to invest in a little piece of Provencal real estate – the village is quiet and very pictureseque with ochre-coloured walls and pretty pastel shutters.  We set up camp in the village centre, beside the tinkly water fountain with its ice cold water and weathered metal water spout faces. From the cooler bag appeared a bottle of Terraventoux La Cavée 2010 white wine and some crostini topped with local goat’s cheese and honey, and we spent a happy half  hour tasting wine and chatting beside the fountain in the shade of the ancient trees 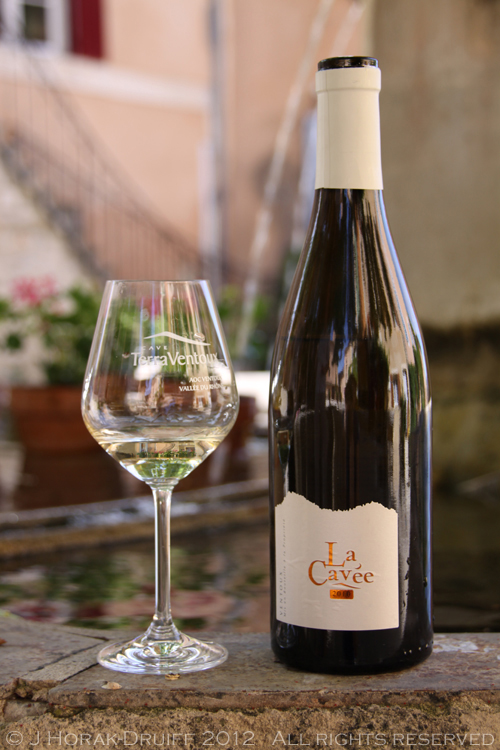 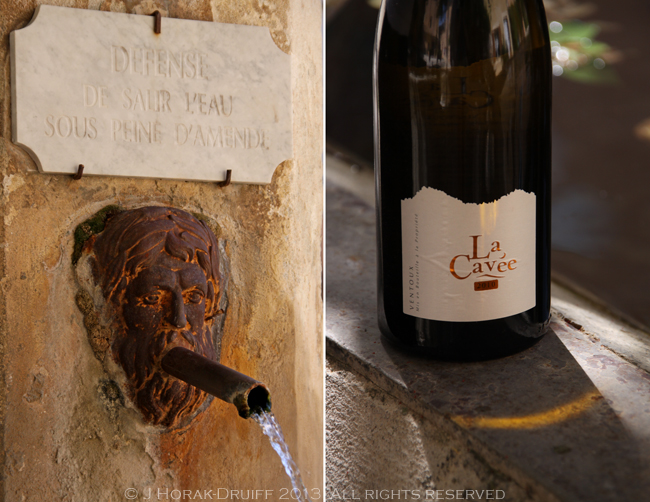 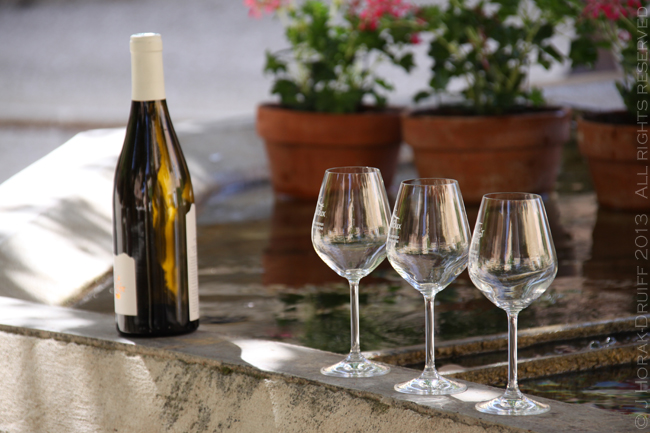 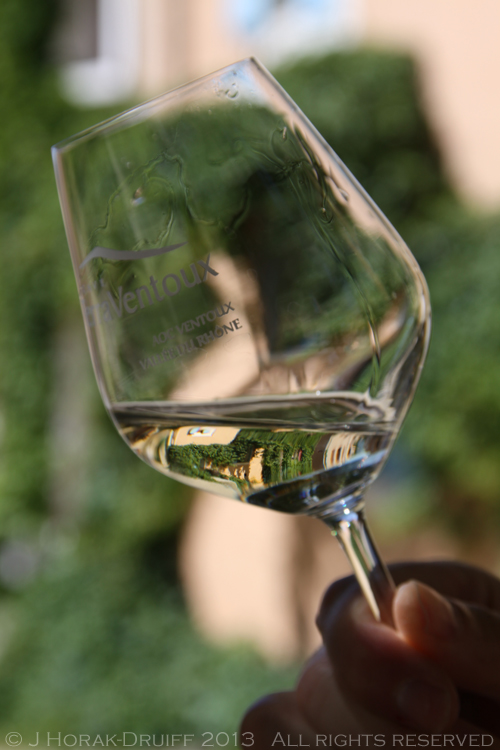 From there, we drove on past hilltop villages, vineyards and orchards, catching the occasional glimpse of the surreal white-topped Mont Ventoux that towers over the wholearea.  As we drove, the landscape changed – fewer neat vineyards and occasional patches of wild bush, until Gabriel eventually pulled up on a rather unprepossessing sandy lay-by off a quiet lane.  Little did I know that our next stop was to be one of the most surprising places I have ever been.  We grabbed a bottle and a couple of glasses and wandered into what seemed to be a shallow, sandy riverbed.  Okay, I thought, the next wine tasting is by a stream.  Wrong.  After only about 20m or so, the path descends more steeply and the sides rise around you and within seconds you are walking along the bottom of a hidden ochre canyon, with walls towering 8-10 metres above you.   I was astounded.  Gabriel told us that the canyon runs for a number of kilometres and that because it is on Terraventoux’s land, they feel it is their duty to protect it.  For this reason, they do not disclose its exact location and you can only visit it on accompanied tours such as the one we were on.  I certanly don’t think I would ever be able to find it again – I think you have more chance of falling into it while distracted than pinpointing its entrance – who could have thought something so large could be so well hidden?  And what better pace to try a glass of the Terraventoux Rosé, a wine with the same deep salmon colour as the soil of the ochre cliffs. 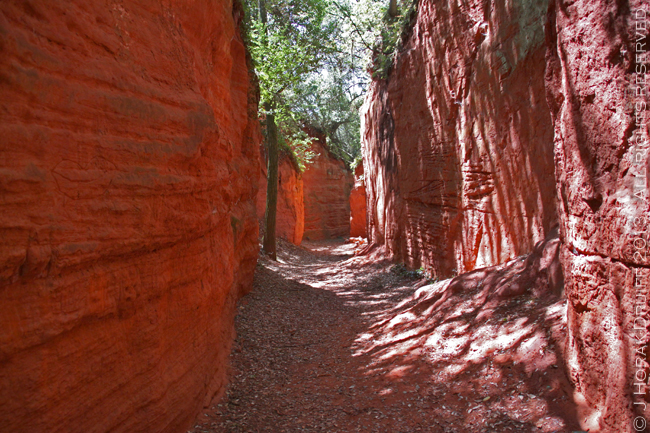 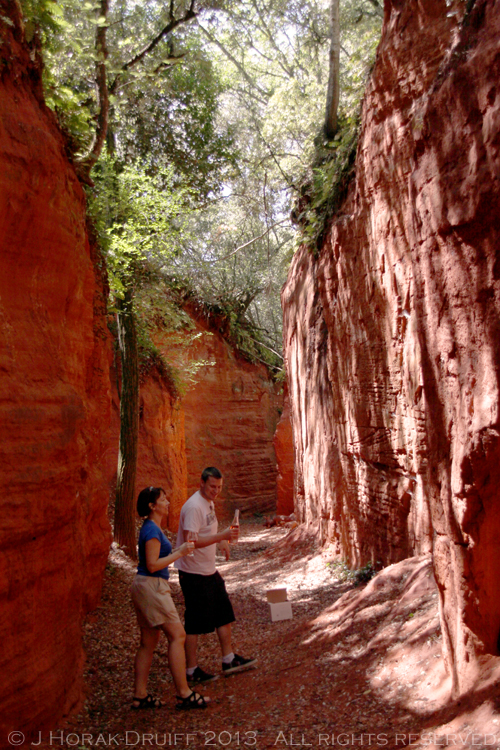 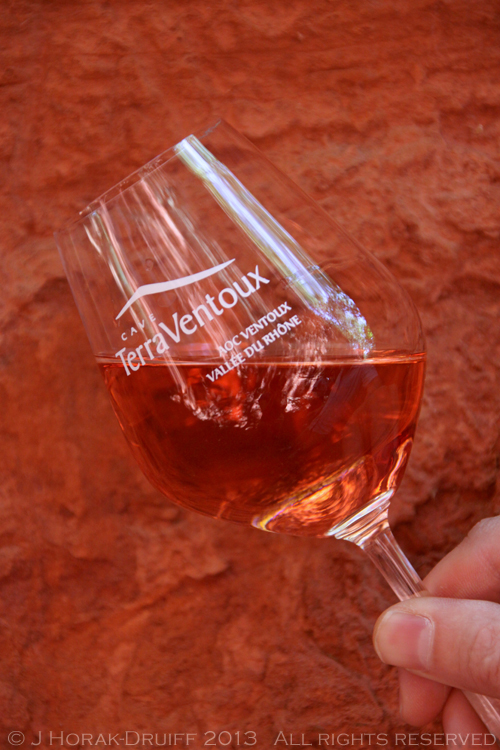 From there, it wasn’t a very long ride/drive to our final destination, a nearby Terraventoux vineyard where the soil was as red as the nearby ochre cliffs, and where the landscape changed once again to give ways to fields of wildflowers dotted in between the vineyards.  I was astonished at how much the soil can change within a relatively small area (compare the vineyard photos at the start of the post to the one below) , but as Gabriel said, this enables Terraventoux to successfully produce a broad range of wines. At our last stop, Gabriel directed us to a little table in the shade of a small stone building, right on the edge of a vineyard.  Here, he produced a picnic basket and left us, promising to return in an hour or so.  The basked was packed with local delicacies: a jar of paté, cheese, phenomenal heirloom tomatoes, plump cherries and a fresh baguette.  And of course, a bottle of the winery’s silky smooth Terres de Truffes red wine from vines over 25 years old (50% Syrah and 50% Grenache). I can think of few better ways to spend a sunny afternoon in Provence. 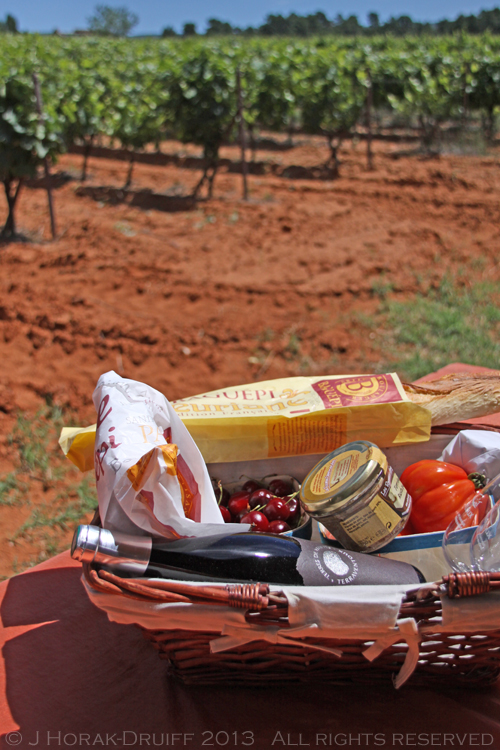 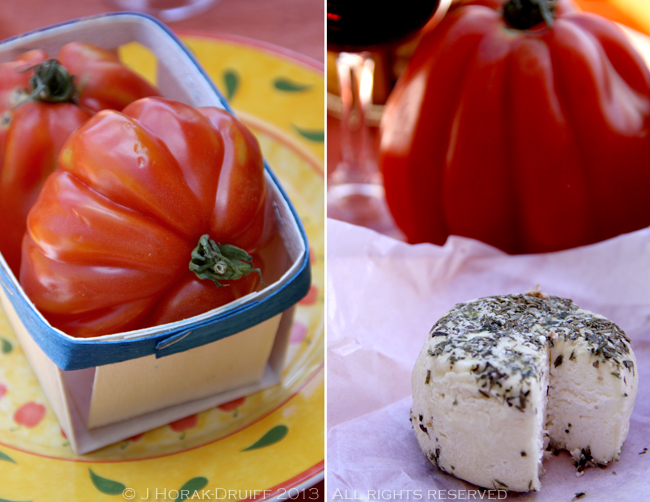 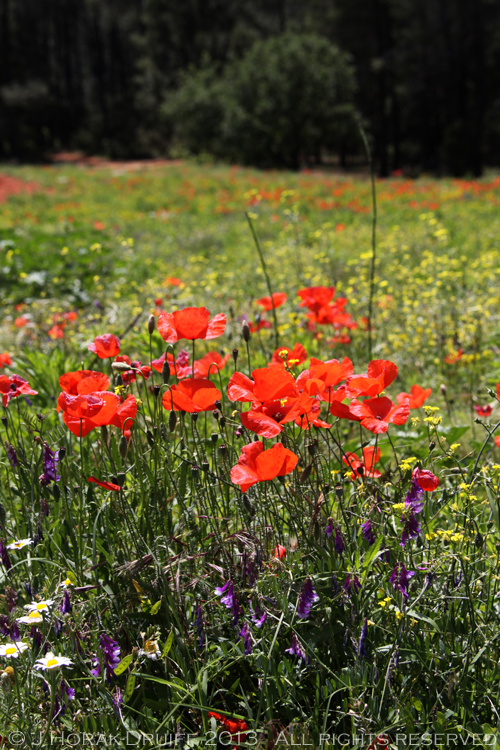 Sadly, that marked the end of the vineyard tour, but we also went back to the cellar and tasted a number of the Terraventoux wines, all of which are for sale on site.  It had been a magical morning in breathtaking surroundings, made all the more pleasant by Gabriel’s obvious enthusiasm and passion for the region and for his job.  If you are looking for something different related to wine, not just the standard sniff, swill and spit experience, then Terraventoux is the place for you.  The winery is committed to sustainable wine tourism (Gabriel will wax lyrical about it if you ask him!) and they offer a variety of wine-related activities from March to September, including horse-drawn carriage rides; electric bike rides like the one we did;  summer vineyard tours at dusk; and even a truffle and wine tasting with a local truffle hunter.  It’s a wonderful day out, even if you are not an enthusiastic consumer of wine.

Electric bicycle tours like ours take about 2,5 hours, cover about 20km, and include wine tasting stops and commentary. The cost is €20 per person. Contact: +33 4 90 61 79 47, ask Gabriel Valverde or e-mail [email protected]

The Vaucluse Tourist Board has more information on their website about the Ventoux region and its attractions, including a selection of Mont Ventoux cycle routes for enthusiastic cyclists

DISCLOSURE: I visited the Terraventoux winery  as part of a self-drive trip that was partially funded by the Vaucluse Tourist Board, and the bicycle tour was  paid for by the tourist board.  I received no remuneration other than food and accommodation and all opinions are my own

Other posts in my Vaucluse series include: