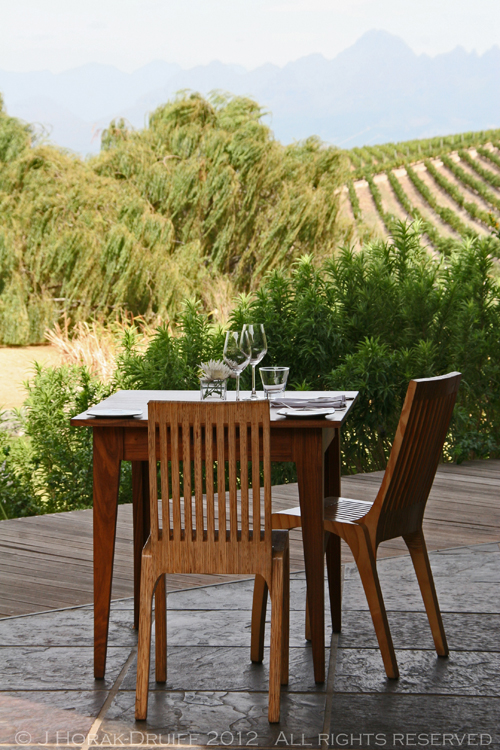 When I started visiting Stellenbosch and Paarl the Cape winelands for the first time as a student, eating was the furthest thing from my and my companions’ minds.  The main aim was to find wineries that did not charge you for tasting and then to schmooze the staff behind the tasting counter so that you could imbibe as much free wine as possible in a short space of time, before moving on to the next farm like a swarm of thirsty locusts in battered Volkswagen Golfs. Often we would completely forget to eat, only realising at 4p.m. that we had consumed close to our own bodyweight in wine but nothing more than the odd water biscuit by way of food.  This usually led to emergency visits to the Wimpy for the biggest burger that they served, washed down with a milkshake, followed by eater’s regret all the way home to Cape Town.  Half the problem was that most wine estates really didn’t have much by way of dining facilities in those days – I still remember the utter novelty of Fairview opening their cheese tasting room and our dim realisation that there may be more to enjoying wine than simply the volume of consumption.  These days, of course, it is a different story.  Many of our wine estates now have some sort of dining establishment on the premises, from the relaxed and informal to haute cuisine fine dining – in fact, many of the country’s top restaurants may be found on wine estates: La Colombe, Terroir, Overture and Jordan all spring to mind.

I first came across George Jardine when I was told by almost everybody I knew in Cape Town that I had to head for Jardine’s Bakery in downtown Cape Town to try the legendary bacon croissaints.  Apparently there was quite a daily scrum for these and I considered myself lucky to have snagged one in the final days before the lease on Jardine’s bakery and his neighbouring award-winning restaurant ‘s lease expired and the doors closed forever. But this was not to be my last encounter with his cooking before I left Cape Town.  A week or so later, I was invited to lunch by André Morgenthal of Wines of South Africa at Mr Jardine’s newest culinary venture: Jordan restaurant on the Jordan wine estate near Stellenbosch, which he opened in November 2009.  The restaurant resembles his Cape Town establishment in layout, with a huge open kitchen containing a wood-fired oven, but once you see the view you won’t want to be looking at the kitchen any more.  Tables spill out onto a terrace overlooking a reed-lined lake with vineyards and mountain peaks beyond it.  It’s tranquil, glamorous and beguiling all at once. The menu is brief and changes almost daily, with the Chalmar beef being one of the few constants.  Venison and local fish also feature prominently along with classic European items such as foie gras and buffalo mozzarella cheese.  While we were pondering our choices we snacked on their excellent bread served with a little bowl of tapenade, a combination so delicious that we had to make a conscious effort not to each too much and ruin our appetites!  I started with a trout ceviche with baby beetroot, gorgeous red beetroot sprouts, wafer-thin radish slices and what I suspect was crispy fried fennel stalks.  Apart from being one of the prettiest plates of food I have seen in ages, it was also delicious – I loved the contrast between the yielding fish and the crispy radishes and fennel stalks; as well as between the acidic ceviche marinade and the earthy beetroot.  André had what I recall was a ham hock terrine or similar, which was also beautifully served wrapped in roasted peppers and bordered with mayonnaise.  All the starters were served on black slate which some find annoying but I rather like, not least because it shows off the colours of the food to great effect. As an intermezzo between the starters and main course the kitchen sent us a little wooden board containing possibly my favourite combination in all the world:  pan-seared foie gras served with roasted figs.  The foie gras was perfectly cooked with a crisp crust and a barely cooked interior and paired beautifully with the luscious figs.  And from there it was into our main courses.  I believe André had the wood-fired pork belly with wilted summer greens, apple puree, roasted apple and sautéed mushroom boullion (and I had menu envy!).  This was a great combination of flavours and textures and a proper portion rather than chi-chi slivers of food arranged artfully on a plate.  Nick opted for herb-crusted venison fillet served with potato puree and nectarines (a great foil for the peppery, spicy meat); while I chose the roasted fish (kabeljou?) served on a cassoulet of squid, white beans and cherry tomatoes.  This was light, fresh and spoke of good ingredients not messed about with, and a tried and tested combination of complementary flavours. To wash down our food, André had selected a Le Riche 2003 Cabernet Sauvignon. This is a classic full-bodied new-clone South African Cabernet Sauvignon, with minty and cedary notes and lots of juicy, ripe underlying cherry fruit.  It was probably a bit heavy with my fish, but in deference to Nick and André’s more carnivorous choices, I was happy to drink it.  None of us felt up to the challenge of dessert, but if I had been able to go the extra mile, I would have opted instead for a trip to Jordan’s cheese room where you can make up your own cheese plate from a selection of South African artisanal cheeses. Service throughout was friendly, professional and unobtrusive.  I thought the portion sizes, especially of the mains, were good and I loved the plating and the crockery – lots of use of square dinnerware and slate (beware slate-plate-haters!).  As I was Andre’s guest I am not sure what the total bill came to, but at the time of our visit in March 2011, the tasting menu of five courses was priced at R300 (about £25) for the food only (or R500 with matching wines).  From the a la carte menu you could get three courses for R250 or two for R225.  Although by no means cheap, compared to other similar establishments in South Africa, these prices offer good value for what you get – and viewed in foreign currency they are ridiculously cheap.  This makes a refreshing change from places in the Western Cape increasingly charging prices aimed purely at lightening the wallets of rich, gullible tourists! On a sunny day, I can think of few nicer places to spend a few hours, savourig both the food and the view.

LIKED: the view, beautiful plating, value for money
DISLIKED: not having the time to try the cheese room!
OVERALL:  8/10