They say that practice makes perfect.  If that is indeed the case, then Ed and Tom Martinmust by now be approaching the perfect pub.  Having previously opened a string of successful gastropubs including The Botanist, The Chiswell Street Dining Rooms, The White Swan, the Cadogan Arms and The Gun, they recently opened their first West End pub:  The Angel & Crown on St Martin’s Lane.  I had loved the White Swan and The Gun, so I certainly wasn’t going to decline their kind invitation recently to join some other food bloggers for an evening sampling the Angel & Crown’s food and drink.  The Angel & Crown is one of those rare places that both my husband and I would approve of:  it serves 9 kinds of draught beer on tap for him, and cocktails for me!  Downstairs, the pub area is suitable olde-worlde with dark wood and gleaming brass fittings, but as you ascend the stairs, things become paler and lighter (although still masculine and pubby – this ain’t no poncey wine bar!).  We were in a private room that seemed to be halfway between the downstairs pub and upstairs dining rooms – a lovely size for a part of up to about 12, but you do have constant traffic walking through between floors

We started the evening off with a selection of canapés, including pork crackling with apple sauce; devilled whitebait with tartare sauce, and black pudding Scotch eggs. I expected the pork crackling to be something like pork scratchings, but instead it was thin slices of pork belly with attached crackling.  This was tasty, but the pieces I had were more chewy than crackly (evidently I missed the first round, which was crisper).  Sadly I did not get to try the black pudding scotch eggs, but I simply adored the whitebait – and this from somebody who is usually not too fond of whitebait!  The little fish may not have been suitably spicy to really be called devilled, but they were feather-light, crunchy and pleasantly salty.  I could have eaten these all night. I washed all this deliciousness down with a St Martin’s Mule cocktail (Gosling’s dark rum, vanilla vodka, fresh lime juice, cinnamon syrup and ginger beer) – a fantastically refreshing and grown-up drink. Once we had all mingled and chatted, we took our seats for the meal proper to begin.  We started with the potted smoked mackerel with dill pickle (£7.50), served with crisp toast.  This was attractively served on a wooden board in a little Kilner jar and was a very generous portion.  It was creamy, well-seasoned and delicious – a perfect match for the pickle which ws not too vinegary.  My only comment would be that I would have classidied this as a paté, not “potted” mackerel which implies being preserved in butter and sealed with a little layer of it – but it was nevertheless delicious. The mackerel was paired with a German Dr. Burklin Wolf trocken Riesling, 2010 (£32.50 for a bottle). This had a wonderful fried fruit, honeyed nose, but on the palate it was bone with a lovely crisp acidity balancing out flavours of apricot.  Fabulous. 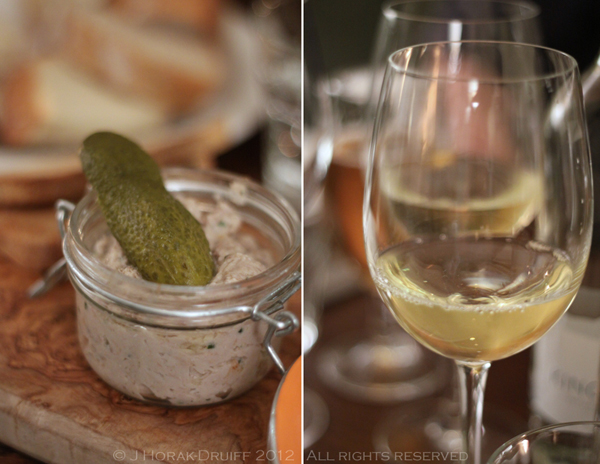 For our main course, we had a totally British and wonderfully seasonal dish:  pheasant and partridge pie with roast bone marrow (£14.50) with side dishes of mashed swede, mashed potatoes, poppy seed onion rings and a herb salad. All the side dishes were good, but it was the feather-light onion rings with poppy seeds in the batter for extra crunch that had us ordering seconds. The first thing that struck me about the pie was the sheer size of the pie – it’s enormous, easily enough for two people.  The second thing that struck me was the giant marrow bone cleverly baked into the centre of the pastry lid to act as a decadent funnel – no ceramic ducks here, mate!  I tentatively lifted the lid on the steaming contents and had a nibble of the pastry which was pretty close to perfect:  flaky and crispy on top, and gooey with absorbed pie filling on the bottom. The pie was packed with richly-flavoured chunks of game bird (which I chewed extra-carefully, mindful of the presence of birdshot!) but the gravy was disappointingly thin – I suspect that some of the fat from the marrow bone had been rendered during the baking and contributed to this.  Still, it was worth it for the pleasure of eating great wobbly scoops of marrow, gouged out of the bone with my fork with scant regard for table manners.  Sadly, though, there was no way I could finish this beautiful dish, given the portion size.  The pie was paired with one of lebanses estate Chateau Musar’s new range of youthful reds 2009 Musar Jeune (£31.50 per bottle).  Made in an accessible style ready for drinking young, this blend of Cinsault, Syrah and Cabernet Sauvignon grapes produced a gorgeous vibrantly coloured wine full of bright, ripe red fruit flavours and some spicy gamey notes to match the pie. 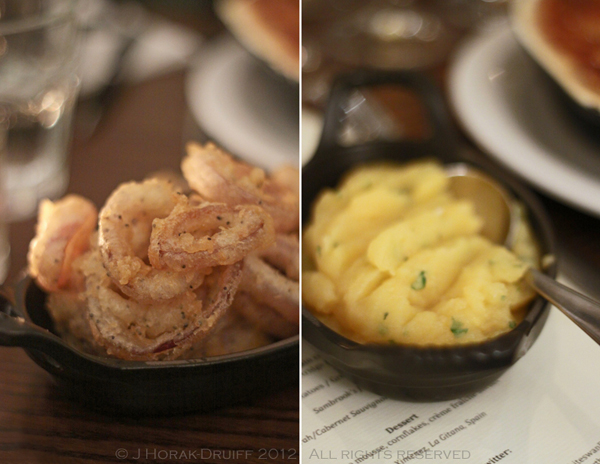 For dessert, we were served chocolate mousse with a shard of chocolate and cornflakes and a creme fraiche sorbet (£5), served in a kilner jar.  I found the mousse pleasant but a little too sweet – perhaps a result of being made with milk chocolate instead of dark? Others were unimpressed with the creme fraiche sorbet but I loved it for its tartness – and of course I am a total sucker for the sweet/salt combination of cornflakes in a matrix of chocolate, so I devoured my cornflake shard with glee! Together with this we were served a La Gitana Pedro Ximinez which was wonderfully sticky and rich – a dessert in a glass (although I might have mathed the dessert with something a little lighter). 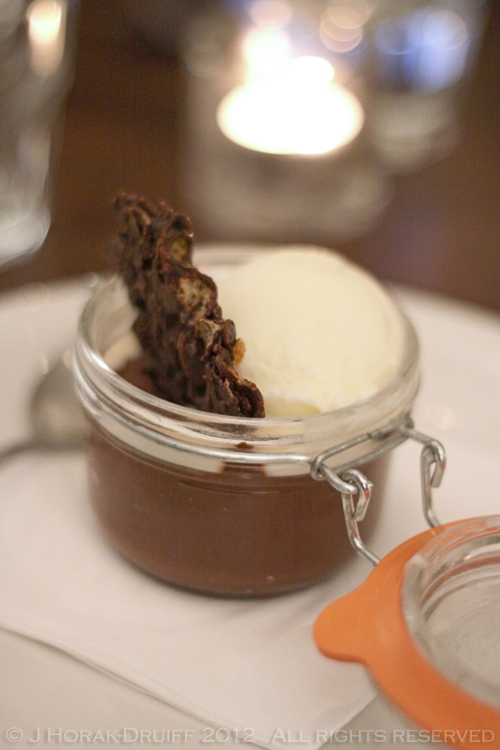 Apart from the full a la carte menu, there is also a Sunday lunch menu and some very reasonably priced pre and post theatre menus from. From 5pm – 6.30pm and 10pm – 11pm you can get 2 courses for £14.95 or 3 courses for £17.95 – an outstanding deal in the heart of Theatreland.  I really enjoyed my meal at the Angel and Crown – it is often hard to find a pub that will appeal both to boys and girls; or both drinkers and foodies, but I think they have the balance right here.  The food is seasonal and British, and interesting without being pretentious – and as I said the portions were huge! It’s a great place for a meal before or after a show, or to meet up with friends for a relaxed meal after work.

Liked: some excellent dishes (the mackerel, pie and onion rings), the value for money
Disliked:  lacklustre dessert
On a scale of 1 to 10:  7

For other perspectives on our meal, please check out my dining companions’ blogs: Luiz of The London Foodie, Denise of  The Wine Sleuth and Kavey of Kavey Eats.

DISCLOSURE:  I enjoyed this meal as a guest of the Angel and Crown pub.