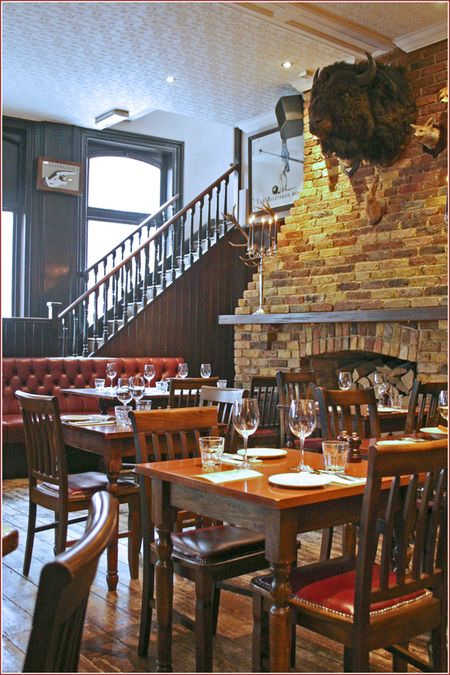 One of the things I love most about London is that you can take a Tube or a bus across town, remain within the city limits, but feel as if you have been transported to another planet.

Allow me to elaborate.  Where I live, there are no houses older than about 20 years (the area was a bombed out wasteland after the war and was only recently redeveloped), green spaces outnumber parking spaces, and if you see a Ferrari you consider calling the cops to report a stolen car. However, in across town in Chelsea, the houses are easily over 100 years old, the density of housing is much higher, and there is enough vehicular eye candy to give me whiplash.  My companions were looking at me a little oddly, but as we walked from South Kensington station to the cadogan Arms, I fell in love with a number of Ferraris, Aston Martins and Maseratis.  Call me shallow.  I blame my father and his obsession with cars!

Our destination through this smorgasbord of grand marques was the Cadogan Arms, runner up in the Time Out Best Gastropub awards 2009/10.  The evening had been arranged as a mini blogmeet by my friend Michelle of Greedy Gourmet who had asked the pub if they could do a set menu for us.  Instead, they offered us a free meal off the a la carte menu, provided we reviewed the meal – so consider yourself officially informed that this meal was a freebie.  We were joined by my dear friend Johanna and the lovely Solange and Sarah.

The Cadogan Arms was opened in mid-2009 by the ETM Group which is credited with starting the gastropub trend in 2000.  ETM owns a number of other gastropubs throughout London, including The Gun, The White Swan and The Botanist, so it’s probably fair to say they have the formula down to a fine art.  The Cadogan Arms looks resolutely pubby (as opposed to poncey blonde wood wine bar “style”) – there are some remnants of what appear to be original Victorian tiles on one wall, dark wood abounds and (bunny huggers beware!) the walls are generously festooned with stuffed animals.  The bison was particularly impressive, if a little disconcerting.

While we pondered the menu, nibbled on the perfectly nice (if unexciting) foccaccia with a good olive oil and balsamic vinegar dip.  Choices made, we started on cocktails – a Dark and Stormy for me and elsewhere at the table, a Caipirinha, a Bellini and a classic Champagne cocktail were all consumed and the bar was more than welcome to mke cocktails that were not on hte brief cocktail menu.  I must say, I loved my cocktail – just the right balance of alcoholic kick and gingery zing.  In fact, it was such a winner that I had two! Michelle and I had already agreed to share all our choices, so for our starters we shared the crayfish and avocado cocktail, and the seared Isle of Man scallops with confit garlic, samphire and hot butter.  The crayfish and avocado cocktail was served in a retro-tastic sundae glass and, unusually, contained a whole lot more crayfish than avocado.  I did love the plump, succulent little crayfish tails, but I found myself missing more generous lashings of avocado.  I can only presume that avocado is more expensive in London than crayfish!  The sauce was a pretty standard Marie Rose and the portion was generous.  I had mixed feelings about the scallops.  First the good: the scallops themselves were done to perfection – crisply seared on the outside and sweet, soft and silky on the inside.  I love samphire, so bonus points there, and the confit garlic was delicious.  The bad: I think my entire week’s salt ration was contained in one shell.  Salted butter plus salty samphire are not a great idea.  And I love butter more than most people, but I have to say that for once, there was too much butter – a cholesterol veritable lake!  So all in all, lovely scallops but somewhat overwhelmed by the butter and the salt. Elsewhere at the table, my companions enjoyed 6 HUGE oysters; mustardy steak tartare with a quail egg; and the wild rabbit, duck heart and pistachio terrine (see my Flickr album for more pictures). For my main course, I chose pot-roasted Greshingam duckling with bacon, peas, broad beans and pearl onions and Michelle plumped for the 35-day aged Aberdeen Angus ribeye steak with Bearnaise sauce, hand-cut chips and bone marrow jus.  As side orders, we had spring greens and garlic fries with a wholegrain mustard dip. I had expected the duckling to come on the bone and did briefly wonder how fiddly it would be to eat, so what arrived took me by surprise.  The duck was served already de-boned, in a gravy with the vegetables – and the portion was huge!  I loved the sweetness of the pearl onions with the rich duck meat and the nod to Spring that the peas and broad beans provided.  the frites were excellent – crispy, garlicky, skinny little waifs that were very moreish when dipped in the wholegrain mustard sauce.  But Michelle’s steak was less of an instant hit – it arrived on the medium rare side, rather than rare as requested.  It may have been down to the thickness of the meat rather than a cooking error (another steak at the table also ordered rare was perfectly bloody, but thicker).  In any event, the steak was changed with apologies and without anybody arguing.  The meat was nicely marbled and tender, and the Bearnaise sauce was among the best that I have tasted.  The spring greens, however, were a disappointment – limp, green and underseasoned.  Maybe we should have kept some of the scallop butter to drizzle over them! When it came to dessert, we mostly opted for specials on the board rather than options on the printed menu.  Solange and I shared both a cheeseboard (which I did not photograph – mea culpa!) and my choice which was slow-roasted pineapple with chilli served with a caramel drizzle and creme fraiche “sorbet” (correct me if I’m wrong – but isn’t the definition of sorbet that it does not contain dairy?!).  This was a winner.  The pineapple was roasted to perfection and served in very thin carpaccio-like slices.  The caramel had good depth of flavour while the chilli added bite and the sorbet provided a cooling counterpoint.  The cheeseboard was generous, containing a full house of British cheeses (Wookey Hole Cheddar, Tunworth, Isle of Avalon, Bosworth Ash, and Barkham Blue) and accompanied by chutney, apples, grapes, celery and crackers.  I did, however, steal a picture and taste of Johanna’s dessert, which was white chocolate mousse with a berry sorbet and a balsamic reduction.  The berry sorbet and the mousse were fine (if a little warm) but oh, that balsamic reduction… I wanted to be left alone in a room with a small jar of it, and have my wicked way :o) Think the theme tune to True Blood. Service was friendly, efficient and unobtrusive throughout (even when we went into food papparazzi mode and roamed the room taking photos!). There is much to like about the menu – proper food that’s not been mucked about with too much, and high quality  ingredients all round, even if the cooking and presentation were sometimes not exemplary (the salty scallops, the forlornly plated terrine, and the desserts that looked a little like the wielder of the drizzle bottle had developed Tourettes of the arm…).  But these are all forgivable. The price per head, including three courses and cocktails, was in the region of £50.  Probably more than you would want to pay for a pub meal, but then again, once you have had a dozen leaden microwaved chicken Kiev’s at “proper” pubs under the watchful eye of suspicious locals, it starts sounding tempting (and, to be fair, the portions were large).  I don’t think I would cross 20 postcodes from my house to visit, but if I found myself in West London in need of sustenance and a great cocktail, I would certainly pop in again.  See my Flickr album for more pictures of the Cadogan Arms dinner.