You are here: Home / Recipes / Gluten-free / Chicken breasts in a mushroom marsala sauce with roasted beets 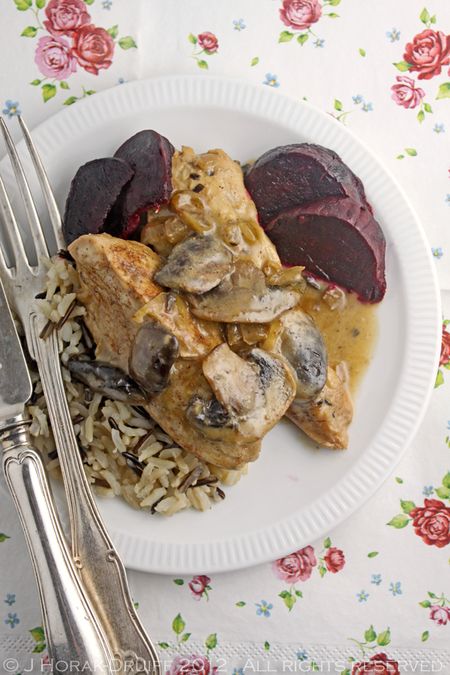 I have a confession to make.

I like to think I have fairly good taste in art, literature and music.  I know my Beethoven from my Vivialdi.  I can actually recite some chunks of poetry from my beloved TS Eliot. I find fluffy holiday reading (especially that marketed at women!) quite unbearable, preferring Jane Smiley’s A Thousand Acres or Jennifer Egan’s A Visit from the Goon Squad or Kiran Desai’s The Inheritance of Loss  (all written by women and not remotely fluffy). My walls are covered in good Klimt and Matisse prints or original art picked up on my travels. My favourite movies run more to Bladerunner, Out of Africa and Monsoon Wedding than chick flicks.  I have no idea who participated in or even won I’m A Celebrity Get Me Out of Here, Strictly Come Dancing, The X-Factor, Britain’s Got Talent, or any number of other TV reality shows that litter our screens.

And yet, and yet… I. Freaking. Love. Watching. Big. Brother.  There, I’ve said it.  I think it has to do with the fact that the first ever show took place in 2000 when I was living in the UK for the first time, and was filmed only a few miles from our house.  We forget how radically different the concept was at the time, in an age as yet unsullied by the plague of reality fly-on-the-wall TV shows that we now have. The idea of putting a bunch of strangers in a house and just kind of seeing what happens was so outlandish and so addictive that the entire country was gripped.  Not knowing whether anybody on the outside was even watching them, the participants still behaved normally (unlike today’s media-savvy lot!) and a lot of the interpersonal drama was real and all the more compelling for it. As an aradent observer of other people, I loved every second of it and spent hours predicting who would vote whom off and how it would all play out.

In the intervening 12 years, reality shows have proliferated, Big Brother participants have realised the career-launching potential of the show and simply play to the cameras, and the shine has worn off the concept.  But when Paul Oakenfold’s music plays, I return to the TV year after year, like Pavlov’s dog, to watch.  We have in fact just had a series of Celebrity (I use the term loosely…!) Big Brother here in the UK and whereas sometimes this offshoot falls totally flat and features insipid nobodies, this one was a corker. Footballer’s wives, twin Playboy bunnies, soap stars, a gay rugby player and a bemused-looking Michael Madsen – probably the only one in the motley crew who is entitled to the celebrity tag. But I digress.  On the first night one participant (an actress who is by no means unattractive, but neither rake-thin nor traffic-stoppingly beautiful) was given a secret mission and had to say whatever Big Brother fed into her earpiece.  This led to her classic greeting of Michael Madsen with “I loved you in Free Willy!” (cue bemused look!); but also to her having to announce to all the other participants “I’ve done a s3x tape!” a la Paris Hilton. The reactions were various variations on the theme of incredulity and it got me wondering how different the reactions would have been if the Playboy twins had said the same thing.

The fact is, we human beings remain past masters at judging things and people on their appearance.  If the gorgeous, slim, blonde twins had admitted to making a s3x tape, nobody would have blinked.  But if they had quoted Descartes, we would all have fallen off our chairs in surprise.  We can be as self-actualised as we like but our lizard brains still yearn to judge a book by its cover.  Take food, for example.  If you are presented with a tiny, gnarled apple and a shiny plump one, chances are you will pick the shiny one even if youknow that the gnarled one tastes sweeter.  And if somebody tells you an avocado (named by the Aztecs because of its reseblance to male testicles – fact!) or the phallic banana, or the fleshy fig are aphrodisiacs, of course you will nod sagely and agree.

But the beetroot? That lumpy, bulbous root, emerging into the world caked in dirty soil and with an alarming tendency to stain everything its sap touches? Surely you jest, you might say – but that would just be you letting your lizard brain do the thinking.  Apparently, the Romans were way ahead of us on this one and recognised beetroot’s aphrodosiac powers centuries ago:  Lupanare, the official brothel of Pompeii, which still stands in the ruined city, has its walls adorned with murals of beetroots interspersed with erotic scenes. And it seems that there is a scientific basis for this:  beetroot is a good source of boron which is directly related to the production of human sex hormones.  Beetroot also contains betaine, a substance that relaxes the mind and is used to treat depression, and tryptophan which contributes to a sense of well-being – meaning that beets can very well get you in the mood for love!  And if things do not go according to plan with your paramour on Valentine’s Day and you end up drowning your sorrows in alcohol, beets also contain beta cyanin.  This pigment speeds up detoxification in your liver, which enables your body to turn the alcohol into a less harmful substance that can be excreted more quickly than normal.

This classy dish would make a perfect Valentine’s dish to woo your beloved with beetroot.  It’s my adaptation of a delicious lunch dish I had at Villa Sjotorp in Sweden last Autumn when I visited, although I omitted the apples from the sauce and used plain closed cup mushrooms rather than chanterelles.  Its everything you could want in a dish – salty, sweet, earthy grown-up in the best sense of the word.  Serve on a mixture of brown and wild black rice, paired with a full bodied white like the 2010 St Joseph Blanc by Pierre Gaillard that I enjoyed last week. 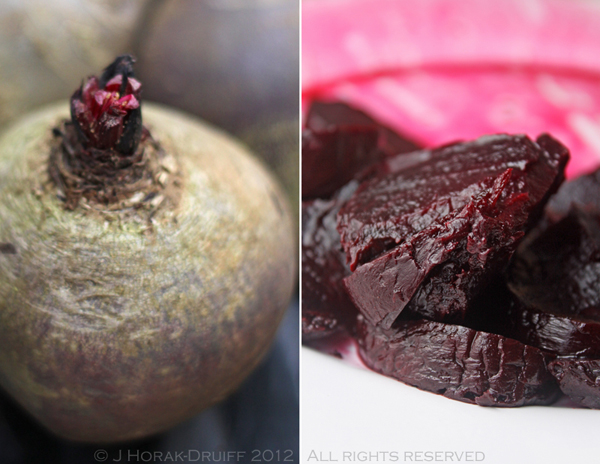 Pre-heat the oven to 180C.  Rub the beets all over with olive oil and roast in the middle of the oven for about 90 minutes or until the beets are soft when pierced with a sharp knife. Allow the beeets to cool, then peel and cut into wedges. (NOTE: After peeling, you could also freeze the whole beets for later use)

Sprinkle each piece of chicken breast with Old Bay seasoning (or  mix of salt, pepper and a pinch of paprika). Heat the 2 tsp of olive oil in a large non-stick pan until hot. Add the chicken breast meat and cook fror 3-4 minutes on each side or until browned on both sides and with no pink showing in the centre of the meat. Transfer chicken to platter and cover with foil to keep warm.

Place the mushrooms and chopped shallot into the same pan and cook for about 3 minutes or until mushrooms are browned and the shallot translucent, stirring frequently. Add the chicken stock, Marsala wine, and any juices from chicken that have collected on the platter. Simmer until the sauce has reduced by half, stirring occasionally. Add the chicken and cream to the sauce, warm through and serve immediately. Did you miss our our super-successful  Tuscany Plate to Page workshop last October? Well, registrations are open for Plate to Page Somerset to be held in the UK in Spring 2012!  Have a look at the programme, details about  accommodation, and if it looks like something you’d like to attend, register here – but hurry: places are limited to 12. It would be great to see you there!

« Food halls, Feskekôrka and fika – a foodie weekend in Gothenburg
The Angel & Crown »