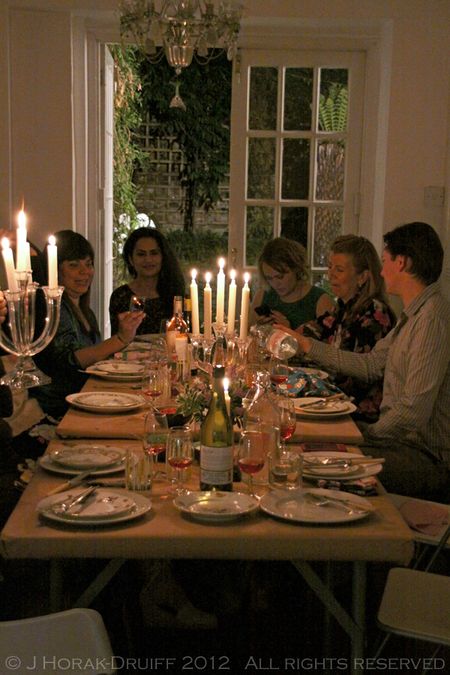 A long time ago in a faraway land, when dinosaurs roamed the Earth, encyclopaedias were made of paper, and blogging was in its infancy, a very lovely friend of mine Johanna had an idea.  She was about to have her second baby and knew that she would be housebound for a while, but she did not want to miss out on foodie fun.  So she devised something called the Cookbook Cooking Club.  A group of us chatted on e-mail (pre-Twitter!  Gasp!) and chose a cookbook.  Then we put together a menu from that cookbook, set a date, got together at her house and communally cooked the dishes before sitting down to eat the gourmet fruits of our labours.  It was a great way to socialise and to enjoy awesome food.

So when Luiz invited me to attend an evening along very similar lines at his home last summer, it was a no-brainer.  Luiz runs regular events under the banner of the London Cooking Club, where he chooses a cookbook, cuisine or country, enlists 12 guests, distributes a menu from which each guest chooses what to make, and then everybody gathers at his place to eat, share and learn.  And as if that did not sound like enough fun, the clincher was that the theme was my motherland:  South Africa!  And so it came to pass that on a lovely summer evening last year, 12 people gathered in Luiz’s gracious home to eat and drink South African.  My lovely fellow-Saffer Tracey and I gave a short talk on South African foods and wines respectively and I gave some pointers on food photography while we tucked into canapés consisting of pancetta, spinach & pasta timbales; and goat’s cheese & coriander pesto samoosas, washed down with a lovely De Grendel 2010 Koetshuis Sauvignon Blanc.  Although the timbales really aren’t particularly South African, they did come from South african author Philppa Cheifitz’s book Cape Town Food. After canapés, we decamped to the dining area – a long table set up betweem the kitchen and the French doors into the garden:  a truly  magical setting for dinner.  Luiz explained the procedure for the evening (if you prepared a dish, you were responsible for serving it and clearing up after it; and chair-hopping is positively encouraged so that you meet and chat to as many people as possible) and then we launched into the starters.  First up was my warm avocado and biltong soup, followed by traditional Cape Malay pickled fish, and then Tracy’s fab little mini chicken bunny chows.  Luiz had asked me to bring along my Lowel Ego light to give people a live demo of how I shoot food – so if the pics look a little staged… that’s because they were 😉 I must admit that it was all a bit nerve-wracking – not only trying to shoot in an unfamiliar location with only a handful of your props, but also having an audience while you are doing so, craning their necks to see the action! Mains spanned a number of South African cultures, starting with a Cape Malay bobotie; moving on to a Durban prawn curry with sambals; and then a farm-style dish of braised lamb shanks braised in Pinotage – South Africa’s own wine cultivar. To accompany these we had another Cape Malay standard – yellow rice with sultanas – and boereboontjies (literally farmer’s beans, consisting of roughly mashed green beans and potatoes mashed together with liberal amounts of black pepper). Our dessert course was a wonderful combination of the traditional and the modern, pairing traditional South African milk tart with paw-paw (papaya) ice-cream – a wonderfully delicate shade of peach and then pimped up by the lovely Rosana with edible pink glitter – too fabulous!  The dessert course was paired with a wine from my all-time favourite South African sparkling wine producer – Graham Beck Brut – and other wines served with the meal included De Grendel 2010 Koetshuis Sauvignon Blanc, Springfield 2010 Sauvignon Blanc, Bouchard Finlayson 2010 Sauvignon Blanc, Beyerskloof 2009 Pintage, Kleine Zalze Vineyard Selection Shiraz-Mourvedre-Viognier. All in all, it was a fabulous evening and a great way both to expand your culinary horizons a little and meet new people in a relaxed and fun atmosphere.  The concept encourages co-operation and teamwork, and Luiz and Dr G are fantastic hosts, making sure that everyone is included in conversations and that the evening (and the wine!) flows smoothly.  Thanks to Luiz for hosting and to everybody who prepared dishes.  Keep an eye on Luiz’s website for future editions of the London Cooking Club!

For another perspective on the evening, see Rosana’s blog post, plus there are some more pictures available in my Flickr album of the evening. Me shooting in my makeshift “studio” (Photo © Hot & Chilli)