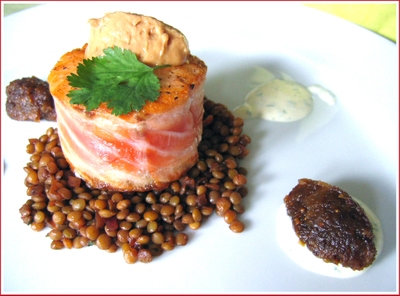 I have written previously about the Cookbook Cooking Club, our inspired idea to keep Johanna “in the loop” while she was home and looking after baby Henrik way back in the spring.  I even posted a Flickr album of photos of the day.  And yet somehow I never actually blogged it.  But in the spirit of carpe diem and general new year tying up of loose ends, all will now be revealed!

As I explained, the idea was for a group of us to get together and choose a cookbook from which to cook a meal at our following meeting, and then to decide on the menu in an informal vote.  And of course, we started off our first meeting by breaking the rules 😉  Two recipes came from the wonderful book Formulas for Flavour, but the main course was concocted from various other sources, together with a dollop of our own inspiration.  Ah well – rules are for sissies anyway!

At the appointed hour, Jenni, Christina, Bonnie and I all presented ourselves at Chez Passionatecook and got ready for a day of cooking – and eating!  The menu for the day was:

I whipped up the cheese olives pictured on the right for us to snack on while cooking, and then we swung into action, chopping, slicing and preparing.  I’ll leave the salmon till last, seeing as it is the only recipe I am posting.  Our mail course of tea-smoked duck was a bit of a guessing game, seeing as none of us had ever actuall smoked a duck… Oh sure, I had been around when Nick made a smoked pork tenderloin fillet or a smoky stuffed beef fillet on our Weber at home, but that’s always his domain and I’ve never been that involved!  Besides, he always has woodchips that he smokes his meat with – we were after a tea-smoked effect.  In the end, we made our own concoction of rice, tea leaves, cinnamon, cloves, apple wedges and citrus peel which we soaked in water and then drained, and placed it on a foil tray to be put inside the enclosed gas BBQ.  The duck breasts were popped into the BBQ on a grill over this concoction and cooked for about half an hour (anybody else who was paying closer attention is free to correct me it this is wrong!).  We then browned them in a pan, both for appearance and flavour.

Accompanying the duck we had Parisian gnocchi.  For those who don’t know, these differ from traditional gnocchi in that they do not have a potato base, but are made of choux pastry.  Johanna whipped up the choux pastry in her nifty Thermomix in no time at all and Bonnie was on hand to pipe the pastry into a pot of boiling water as another willing helper snipped the pastry into gnocchi-sized chunks.  In the meantime, the asparagus was also being prepared by having the tough ends trimmed.  Once the gnocchi were boiled and the asparagus steamed, it was a simple task to slice the duck and serve it on top of the gnocchi, flanked by the asparagus.  I must say that although the duck was delicious, there was not as much tea flavour as we had hoped for.  The dish also suffered from the fact that we were all still feeling the effects of the generous portion size of our rich starter (see below) – but this was hardly the fault of the duck.  As the Afrikaans saying goes: “as die muis dik is, is die meel bitter” (when the mouse is full, the flour tastes bitter)!

But strangely enough, after all that we still had space for dessert!  Dessert was the third of our ambitious endeavours and Christina and I were left in charge.  This amused us both no end as neither of us is a particularly enthusiastic baker and suddenly we found ourselves tackling the shortbread rounds…  Luckily Johanna’s trusty Thermomix was on hand to help out with the balsamic vinegar ice cream because in our giggly state of hysteria I could see that going pear-shaped rather rapidly…  As it was, the ice cream stubbornly refused to freeze to a properly solid consistency, which goes some way to explaining the rather melty state of the picture below. Kind of Dali Does Dessert, if you see what I mean.  You’re looking at strawberries macerated in balsamic vinegar, icing sugar and black pepper, sandwiched between two doughnut-shaped shortbread rounds and topped with balsamic vinegar ice cream and vanilla whipped cream (recipe available in John Campbell’s Formulas for Flavour).  It didn’t look much like the glossy photos in the book, but I have to say it was delicious.

All in all it was an interesting afternoon as the three dishes were each pretty fiddly and there is no way that I would make them on my own for a dinner party.  Not while I still have to work for a living, that is!  But the beauty of the CBCC is that many hands really do make light work and producing this restaurant-quality meal at home seemed perfectly achievable.   Would I make the dishes again?  Probably not – the ratio of effort to result was just too great – with one notable exception:  the salmon tournedos.  Of everything we had to eat, this was far and away my favourite thing, and the textures and flavours of this dish were, to me, in absolutely perfect balance .  The number of steps and the amount of advance planning involved looks daunting, yes.  But with a bit of organisation, it’s easily done and nothing was actually tricky or difficult to do (except deveining the foie gras which resulted in such a mess that we couldn’t sear it at all – just mashed it into a paste and made a quenelle of it!). Next time I would, however, make it as a main course as it is very rich.  In fact, to cut down on the richness and expense, I would even say you could leave out the foie gras – it really is gilding the lily.  Or the fish, in this case 🙂

For the fig & apple chutney

Combine all the chutney ingredietns in a heavy saucepan.  Bring to the boil, then lower the heat and simmer for 2 hours. Add a splash of water if the mixture dries out before the 2 hours are up.  Leave to cool, then liquidise until the mixture is the consistency of jam.  Add the sugar and store chilled until ready for use.

For the spiced lentils

Soak the lentils overnight before cooking (and if you can make the full dish in advance, the flavour improves if the dish is refrigerated overnight).  Cover the lentils with fresh boiling salted water and boil for 30 minutes or until tender.  Drain and leave to cool.

Warm the cumin in a dry saucepan to release the flavour – when fragrant, add the onions, vinegar and garlic.  Cook over medium heat for 10 minutes.  Add the rest of the ingredients plus the cooked lentils and stir well.  Adjust the seasoning to taste with lemon juice.

Remove from the heat and cool completely.  Store in an airtight container in the fridge until ready to plate the dish.

For the herbed creme fraiche:

Combine all the ingredients in a small bowl and mix, adjusting seasoning to taste.

Check that the salmon is free from pin bones and skin.  Trim off the fatty grey flesh on the underside of the fillet.  Lay the fish on a cutting board, lay the fish with the thickest end of the fillet pointing away from you and the tail pointing towards you.  Cut a straight line down through middle of the fillet towards the tail at an angle of approximately 30 degrees, splitting it into two long thin fillets.

Place the strips of fish together, head to tail, on a piece of clingfilm and roll tightly into a long tube, expelling all the air.  Leave to rest for at least 12 hours in the fridge.  To cut the salmon roll into serving portions, leave it wrapped, take a sharp knife and cut the roll into cylinders approximately 4cm wide.  Leave the plastic in place but roll it gently towards the centre of each cylinder, making a “belt” to hold the cylinder together while cooking.

Heat the oil in a non-stick frying pan and season the salmon on the cut ends with salt and pepper.  When the oil is hot, place the salmon in the pan, cut side down, and cook until each cut side is golden brown.  Then reduce the heat and cook slowly for another 3-4 minutes until only the centre of each cylinder remains pink.  Remove from the pan and leave to rest in a warm place.

Warm the lentils and place a spoonful in the centre of each serving plate.  Cut away the plastic wrap from each cylinder of salmon and place the fish on top of the lentils.  Spoon the herbed creme fraiche around it.  Heat a frying pan until very hot.  Season the slices of foie gras with salt and pepper, place int he pan and cook briefly until golden brown – only 20-30 seconds on each side.  Place a foie gras slice on top of eash piece of salmon and finish with a quenelle of chutney before serving.