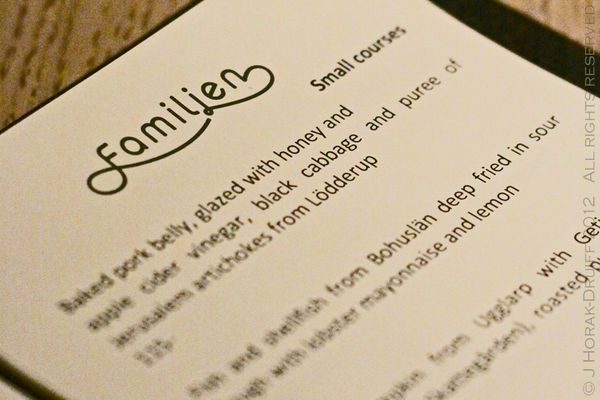 The story so far:  a dramatic landing in high winds, a lost suitcase (mine); a shattered umbrella (Su-Lin’s); and enough relentless rain to make me look nervously around for a big boat and a beardy guy herding pairs of animals on board. Spectacular shopping had gone some way to soothing out frazzled nerves, but what we really needed was food, glorious food.  Luckily we did not have any decisions to make as the lovely Eva from Gothenburg Tourism had booked a table for us at Restaurang Familjen, which was awarded a Bib Gourmande by the Michelin Guide in 2010. Our spirits lifted the minute we walked into the bright, funky and slightly retro space.  The bar area with its bright red seats and lampshades is supposedly designed to feel like a living room and the young, trendyish crowd were certainly making themselves at home.  Our table was in the slightly quieter restaurant area, but still with a great view of the bar: people watching opportunities abound.  The owners describe the cuisine as modern West Swedish and, as far as possible, work with local growers and fishermen to source their ingredients. We were soon settled into our table by our super-smiliey and efficient waitress (a dead ringer for a Swedish Minnie Driver) and eagerly scanning the menu.  There are a number of snacking and small plate options (cured meats, cheeses etc), a full a la carte menu, and a couple of good value daily set menus.  After much debate, we both plumped for the Menu (3 courses with a choice of two main courses, priced at 335 SEK). A slightly more expensive Menu Familjen, priced at 455 SEK, was also available.  The wine list was extensive and roamed all over the world’s wine-producing regions, and included a great selection of wines by the glass.  Having considered what I was eating and consulted with the waitress, I chose a 2008 Montes Alpha Pinot Noir from Chile – a delicious and surprisingly full-bodied Pinot. Before launching into the menu, we were also brought an appetiser of Swedish crispbread (knäckebröd) and butter, accompanied by a little Kilner jar of homemade chicken liver paté with pickles and crispy fried onions. The paté was my kind of paté – rough-textured and full of flavour.  But what made the dish for both of us was the liberal use of crispy fried onions – both the texture and the sweetness were a wonderful foil for the rich paté.  A big winner. For starters, we both had baked pork belly, glazed with honey and apple cider vinegar, black cabbage and puree of Jerusalem artichoke from Lödderup.  Pork belly – what’s not to like about it??  I loved all the elements of this dish and the contrasts that they provided.  Crispy cavolo nero/kale is something that I am WAY overdue to try at home and provided crunch with the sticky, unctuous pork. Sadly, the crackling on the pork lacked crackling, but the flavour was unbeatable.  I absolutely loved the Jerusalem artichoke puree and wondered why I do not serve more things on a bed of this earthy, truffly treat. For mains, Su-Lin chose the braised chuck steak with porter fried turnips, pearl onions and cream of yellow onion. The taste I had was delicious – turnips are definitely improved by close proximity to beer (!) and the onion cream also left em wondering why I don’t try this at home.  My main consisted of seared Swedish potato gnocchi with cauliflower cream and chestnuts, served with a roasted cabbage bouillon.  As Su-Lin said after one nibble: “Why aren’t ALL gnocchi seared?”, and I do have to admit that searing them to a slightly caramelised crust definitely adds a delicious flavour dimension to an already tasty dish. The cabbage bouillon and leaves were a novel use for a much-maligned vegetable and the chestnuts paired surprisingly well with the other components – but it was the cauliflower cream that had me wanting to lick my plate clean. A lovely, light and unusual dish. The dessert on the menu was listed as lingonberry cake with a star anise bouillon, but this was substituted with a simple yet intriguing gingerbread cake with vanilla ice cream served with lingonberries, saffron bouillon and crisp of Christmas spices – all the flavours of a Sdewish Christmas in one bowl! Much as I have discovered that the Swedes like their salt, I have also found that they do not seem to have a huge sweet tooth as the cakes and desserts often seem admirably less sugary than their equivalents in other countries.  A lot of use is also made of the tart berries that Sweden is known for, to take the edge off sweet dishes – and this dish was no exception.  The moist cake was beautifully paired with the jewel-like berries but the highlight for both me and Su-Lin was the delicately fragranced golden saffron syrup (definitely more of a syrup than a bouillon) at the bottom of the bowl.  Why do I never think to use saffron in sweet dishes?  It’s a wonderful addition. The evening was really relaxing and completely banished all memories of lost luggage and driving rain.  The atmosphere was lively but never intrusively so, and the restaurant remained full until about 11 when we finally caught a cab home.  The food, for the equivalent of about £32 each for three courses and that substantial paté snack was very reasonable if you think what you will get for that in London.  Sadly, I did not note the wine prices, but I do recall the wines by the glass being relatively pricey – a function of the Swedish system of alcohol taxes rather than the restaurant’s policy.  All in all, it was a wonderful meal in relaxed surroundings, with friendly, knowledgeable service and none of the pressure to vacate the table after two hours that so often dogs London restaurants of this calibre.  Highly recommended should you ever find yourself in Gothenburg of an evening!

Liked: the buzzy atmosphere, the well-priced and innovative food
Disliked:  tha fact that it’s not in London!
On a scale of 1 to 10:  8

For another perspective, please check out Su-Lin’s review of the same meal.

DISCLOSURE:  We travelled to Sweden as guests of the West Sweden Tourist Board, Visit Sweden and SAS.

Thank you again to the West Sweden Tourist Board (Facebook page, Twitter, Blog) and Visit Sweden (Facebook, Twitter) and also to the Gothenburg Tourist Board. Our flights were provided by SAS and a return trip to Gothenburg from London Heathrow is about £103 including all taxes and charges. Did you miss our our super-successful  Tuscany Plate to Page workshop last October? Well, registrations are open for Plate to Page Somerset due to be held in the UK in Spring 2012!  Have a look at the programme, details about  accommodation, and if it looks like something you’d like to attend,register here – but hurry: places are limited to 12. It would be great to see you there!