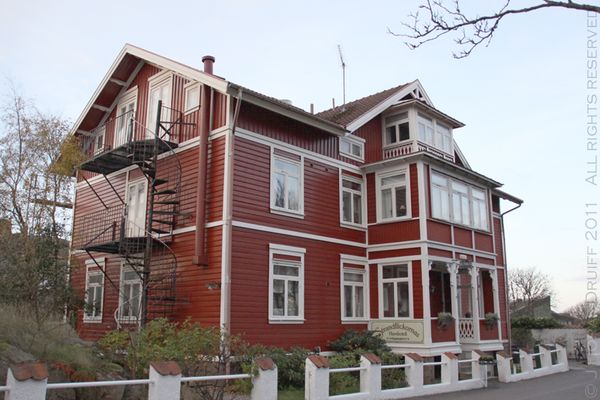 [The registration phase for the South African Blog Awards 2011 closed today.  I have registered my blog on the (admittedly illogical) advice of organiser Chris Rawlinson.  But I have every reason to believe I will be disqualified.  The Best Overseas Blog category has been scrapped and the new rules introduced this year require bloggers to be resident in South Africa, thus effectively banning the entire (and substantial) South African blogging diaspora. So despite my long standing support for the Awards and for food blogging in South Africa; despite my regular posts about South African foods and destinations; and despite planning my annual trip to Cape Town around the Food Blogger Indaba dates, I am no longer welcome at the Awards. Thanks guys.  I’m feeling the love.]

This is the second in a series of posts covering a Shellfish Journey to West Sweden on which I was very kindly invited by the West Sweden Tourist Board and Visit Sweden, together with five other food bloggers.  Further posts will follow over the next couple of weeks. An album containing all my shellfish journey photos is available on Flickr.

After working up an appetite travelling in trains, planes and automobiles (and boats!) all day, we were a little weary by the time we disembarked from our mussel safari that afternoon – good thing it was only a short walk from the harbour through pretty Lysekil to the Strandflickorna Havshotell where we would be spending the night.  The hotel was built around the turn of the 19th century the wooden building has been restored as a labour of love.  One of the charming owners told us a little about the history of the hotel over a glass of pre-dinner bubbly and about how she had planned only to run a hostel for one summer but ended up running the hostel AND the hotel as a full-time job.  The adjacent hostel (Strand Hostel & Hotel) has 70 beds divided among 20 rooms varying in size from single rooms to dormitories; but we stayed in the hotel itself.  There are 15 rooms in total, each individually decorated – to a theme, as we discovered.  Themes include Hannah the Maid’s Room (vintage muslin clothes hanging on a line against one wall); the Captain’s Room (bold nautical stripes on the walls, gleaming wood and brasswork elsewhere); and the Turkish Consul’s room (a red canopy bed, a Bokhara rug and your own fez!).  There was also what appeared to be a Scottish Laird’s Room with tartan touches and a stuffed pheasant :o). It’s all slightly bonkers but in a good way – like the period cap and apron that our hostess wore.  There are conference facilities and free wi-fi throughout the building, and it’s also possible to book spa weekends at Strandflickorna (there is a hot tub on the rocks at the ocean’s edge, just below the hotel). Having finished our bubbly, we headed out for dinner at Café Ferdinand.  Cafe Ferdinand is situated in Gamla Stan, or the Old Town, in Lysekil.  I loved our short walk from where the taxi dropped us to the restaurant – the narrow cobbled streets and the wooden clapboard houses were so incredibly… Swedish! I do so love the Swedish habit of putting small lamps on almost every windowsill – it makes the interior of almost any house look warm and twinkly and inviting.  (On that note, all my staring through random windows in Sweden also taught me that IKEA is not just an idealised vision dreamed up my the marketing department of what Sweden looks like – great chunks of the country truly do look like that! Too marvellous.) Café Ferdinand is situated in one of the clapboad buildings in the old town and is run by Johanna Hallerod.  The interior is warm and inviting with lots of wood, twinkly candles and beautiful vintage (or at least vintage-style!) crockery. There is no dinner menu here (or at least we didn’t see one) – it’s all about the seafood buffet. Now if I mention seafood buffet to you, what springs to mind?  Large dishes of cheap things like fish pie or anonymous grilled fish fillets with mounds of tartare sauce?  Not at Café Ferdinand.  This is the Real Deal.  A seafood buffet that you are invited to visit as many times as you like, positively groaning under its load of premium shellfish.  A crate of seafood, anybody?  Prawns, crab claws or luscious large langoustines? Help yourself!  Or maybe some warm langoustines, already split and seasoned for you?  Take one – or two! There was smoked mackerel and a dill-heavy shrimp mayonnaise salad – but not the sadly spongy shrimps we get here in the UK – sweet, dense little pink crescents packed with flavour. There were boiled eggs nestled in fresh dill leaves and little pots of shrimp pannatocca; a parade of sauces to complement the seafood; luscious gravadlax that melted on your tongue like fishy butter; and cute Caesar salads served in small glasses, topped with the plumpest seared scallops I have seen in a long time. Just figuring out what to have first was a challenge. In the end I opted to start with the mussel soup bubbling away in its pot.  It was a good plan.  The soup was rich and creamy and packed with mussel flavour – I slurped up every last drop and then wiped the bowl clean with my bread. Waste not, want not 🙂 “Do you want to try some oysters?”, asked Johanna.  That was a rhetorical question, right??  Fresh native oysters promptly arrived, as bright and briny as the ones we tried on the mussel safari earlier, like a wake-up call for your palate.  In case anbody was not too keen on raw oysters, we also got a plate of gratinated oysters – a deliciously crunchy, garlicky treat, but I still prefer them au naturel. ANd then it was back to the buffet to try and make a dent in all that lovely seafood. I had kind of guessed the Swedes would  be big on seafood (and as every IKEA customer knows, they are big on meatballs and Daim chocolates ;)) – but what I had not expected was their love of cheese – served alongside seafood!  It was to be a recurring theme throughout the weekend – an unusual combination perhaps, but one that I fully support!  So after we had eaten out fill of seafood, our attention turned to the cheese buffet.  The cheese were lovely (especially the goats cheese) but the complete highlight for me was the Brynt smör or browned butter (buerre noisette).  It’s just butter that’s been melted and allowed to cook till it caramelises and browns slightly, then cooled down again till it solidifies – but the process changes its flavour unrecognisably, making it slightly caramelly, slightly salty and very nutty.  I could have eaten the entire bowl myself (sorry, coronary artery!) To accompany that, I had some Punsch, a traditional Swedish liqueur that has as its basis arrack – and Indian distilled spirit originally imported into Sweden by the Swedish East India Company in the 1700s. And then it was all over, with only a mound of empty langoustine shells on the table as incriminating evidence. Johanna later explained to us that all the seafood we had eaten that night had come from within an hour of Lysekil – very impressive and depressingly rare.  This is why it is not possible to just drop in for dinner here – letting such wonderful seafood go to waste would be criminal, so they need to know exactly how many they are catering for.  Dinners have to be pre-booked as a group booking, something which can usually be arranged through your hotel.

All posts in my West Sweden series:

DISCLOSURE:  We travelled to Sweden and enjoyed our Shellfish Journey as guests of the West Sweden Tourism Board and Visit Sweden

Flights from Heathrow to Gothenburg fares incl taxes and charges on SAS (https://www.flysas.com/en/) start from £63 one way or £103 return