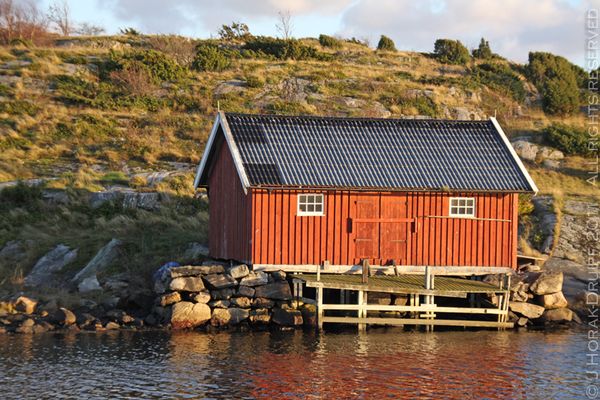 This is the fourth in a series of posts covering a Shellfish Journey to West Sweden on which I was very kindly invited by the West Sweden Tourist Board and Visit Sweden, together with five other food bloggers.  Part 1 covered Villa Sjotorp and a mussel safari from Lysekil; Part 2 covered a seafood buffet at Cafe Ferdinand in Lyskil; and Part 3 covered South Koster Island and lunch at Koster Garden Café.  An album containing all my shellfish journey photos is available on Flickr.

Having spent the morning walking and cycling around the beautiful South Koster Island, we were all ready for a more relaxed afternoon on a lobster safari organised by the Hotel Ekenäs.  We had visions of our mussel safari the previous day, when we had sailed on mirror-flat inlets sparkling in the late-afternoon sun, the boat hardly moving beneath our feet.  But it was not to be.  Our lobsterman guide for the afternoon arrived at the hotel with the news that the sea was somewhat less than flat, and that in the area where he sets his lobster cages the swells were two and a half metres.  Which didn’t sound toooo bad… until I asked him how long the boat is:  ten metres.  Call us lily-livered landlubbers, but as each of us visualised this ratio in our heads, our enthusiasm waned somewhat.  An open boat, 2.5m swells, seawater drenching us and our cameras, lobsters flailing about the boat snapping at our heels…  not a pretty picture.  And so we took him up on his Plan B, which was to take us on a pootle around the protected stretches of water rather than where the lobster cages were.

We scrambled back into a new set of hilariously unflattering survival suits (the smelliest by far that we had to put on during the course of the weekend) and made our way down to the dock to board the boat. Sadly, I think our captain was by then so disgusted at our general lack of backbone, derring-do and sea-legs that he decided to leave us to our own devices for the rest of the journey.  In contrast to Adriaan the day before, he told us nothing about the islands and inlets we were sailing past, or about lobster fishing in general, preferring to spend his time alone in the wheelhouse.  Ah well.  The adrenalin-packed highlight of the trip was when a high-speed catamatan ferry came bearing down on us with such speed and ferocity that we nervously joked about how it could sail straight over us without even feeling the bump!  Fortunately it was only toying with us ;). Once we were safely back in the harbour, our captain moored up and then… wandered off to see to another boat, leaving us to scramble out of the boat sans gangplank or any other means of facilitating the awkward vertical rise between moving boat and concrete jetty.  Good thing we were all nimble young things – but heaven help you if you come on this safari and you are over the age of 50 or have any sort of mobility problems!  While we had been dragging ourselves off the boat and back onto dry land, our captain had retrieved some lobsters he had caught earlier, so we could at least get to see them in their pre-thermidor state. Evidently, lobsters can live for decades (maybe centuries) if left undisturbed and as proof, he showed us an enormous specimen he had caught, about 50 years old, the likes of which you won’t see on your plate in a restaurant.  More of a family meal for six than dinner for one! Back at the hotel we were relieved to peel off our fishy survival suits and head for the kitchen where one of the hotel chefs was to tell us a little more about lobsters and explain to us how they cook them.  We learnt how to tell the difference between male and female lobsters and it’s all in the width of the tail apparently – so not that different to humans, then! There were a couple of feisty specimens in the crate in the kitchen which we could pick up if we liked – I kept feeling a little sorry for them and wondering if they could possibly know that their doom by poaching was fast approaching.  We were told that the hotel’s recipe for poaching lobsters was a ratio of 20l of water and a hefty 800g of salt, together with lots of fresh dill stalks, into which we watched the lobsters being unceremoniously dunked. (To my relief, though, there was no squealing noise as the poached!) I was amazed at how quickly the lobsters turned from glossy black-brown to red and did a little reasearch on how this happens.  Apparently lobsters have a red carotenoid pigment called astaxanthin in their shell, which is mixed with other pigments to form the lobster’s normal dull coloration. Astaxanthin is stable in heat, while the other pigments are not. So this means that when a lobster is cooked, the other pigments break down, leaving only the bright red astaxanthin and by extension, a bright red lobster on your plate. Fact! Appetites suitably whetted by the sight of so much fresh lobster, we nipped back to our rooms to freshen up for dinner and then regrouped in the corner of the cosy dining room where a crackling log fire and flickering candles provided a truly Swedish welcome.  The menu for the night was the hotel’s Classic Autumn Lobster Menu (795 SEK per person) and to get us ready for the main event, each table was already laid with fresh breadrolls and cow’s as well as goat’s milk butter, and a bowl of lobster popcorn.  Yes, you read right – lobster popcorn:  popcorn tossed with lobster powder (made from lobster oil and cornstarch) and topped with lobster chips.  These are an evil creation like a wafer-thin version of prawn chips – they melt instantly on your tongue and leave behind just a salty essence of lobster.  Addictive.  Our first course was a creamy lobster bisque seved on lobster semolina and artichokes, accompanied by a retro-tastic glass of medium cream sherry. The bisque was outstandingly smooth, thick and creamy and packed with flavour that indicated many lobster shells had boiled for many hours to make its base stock. It also paired well with the earthy chunks of artichoke in the bottom of the bowl.  The main course was (of course!) Koster dill-poached lobster served, mystifyingly, with a slice of very good cheese quiche and some aioli and red-pepper mayonnaise for dipping. The quiche was excellent, but not something I had ever thought to serve with lobster.  Crazy Swedes.  The lobster was delicious and succulent but even to me, it was too salty – and I LIKE salt. Maybe a little less salt in the poaching liquid? But as you can see from the debris, the saltiness didn’t stop us from sucking every claw clean and digging the last bits of flesh from the carapace… This was followed by more cheese in the form of the cheese course:
Himmelsraften, a washed rind hard cheese from Jämtland served with sea-buckthorn and smoked rapeseed oil. I loved the Comte-style cheese and I am a sucker for the mouth-puckering tartness of sea-buckthorn – but I am not sure that the two complemented each other particularly well.  Our dessert consisted of a pretty plate of poached Clara Friis pears, vanill a ice-cream and pear cognac zabaglione.  If you are a dessert person, the portion might have disappointed you, but for me these small sweet bites were just perfect – and the boozy zabaglione was fantastic. For just under £75 per person, I thought the meal was not cheap but not unreasonably priced, given the fact that we got a whole lobster each plus three more courses. We were served a different glass of wine with each course, including a ravishing red Italian dessert wine (the name of which now sadly escapes me); but if you had to order wine off the wine list, the cheapest very basic Jacob’s Creek Semillon Chardonnay came in at about £36 and from there, the only way was up. Gulp. Still, I can think of worse places to enjoy a long and leisurely evening.  No London table turning here! Having finished our meal, we had the option of joining hip young (and not so young) locals in the hotel lounge bar where “Rocktober” was in progress – a surprisingly competent cover band belting out rock classics to an enthusiastic audience.  But I elected to enjoy the music from a distance, i.e. the comfort of my bed, where I drifted off to the surreal but unmistakeable strains of Rock Springfield’s “Love Somebody”.  Only in South Koster. The following morning on the way to breakfast I was treated to a breathtaking sunrise before sampling the excellent breakfast buffet, packed with meat, cheese, eggs, bacon (again – very salty!), gorgeous breads and reviving coffee.  And then it was time for our next adventure, which I’ll be telling you about in my next post: a high-speed boat ride to Grebbestad and an unforgettable oyster experience.

More photos are available in my Sweden Flickr album.

All posts in my West Sweden series:

If you feel the need to visit Sweden after reading all this, you can win £400 worth of flights from the UK to Europe (including Sweden!) on my blog this week by answering a simple question (closes 6 December); or you can win a festive weekend in Gothenburg by entering the West Sweden Tourist Board’s Twitter competition (closes 4 December 2011).

DISCLOSURE:  We travelled to Sweden and enjoyed our Shellfish Journey as guests of the West Sweden Tourism Board and Visit Sweden

Flights from Heathrow to Gothenburg fares incl taxes and charges on SAS (https://www.flysas.com/en/) start from £63 one way or £103 return