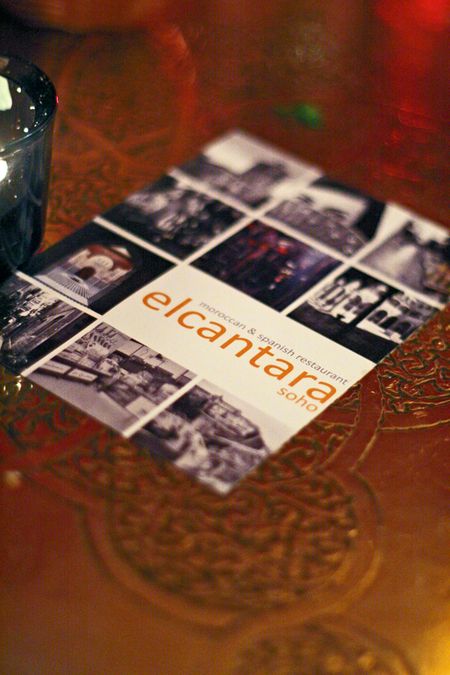 One of the best things about London is the variety of ethnic cuisines that are available at restaurant throughout the city.  Ethiopian? French? Malaysian? Thai? Lebanese? Greek?Moroccan?  Spanish? All are easily available. And we won’t even mention the myriad of Indian or Chinese restaurants for which parts of London are famous.  One of the cuisines that I don’t try nearly often enough is Moroccan – in fact I probably make more Moroccan food at home than I have eaten in restaurants all year.  I did have a spectacular meal at Momo about 18 months ago, so late last year when I was fortunate enough to be invited along with a group of bloggers as a guest of El Cantara (a new-ish restaurant in Soho, serving Spanish and Moroccan food) I was eager to see how it measured up.

My “date” was Michelle of Greedy Gourmet (we dine together so much people will begin to talk ;o)); and my neighbours at the table were Ms MarmiteLover and A Lady in London and also were in attendance were A Girl Has to Eat, Boon of The London Insider and a couple of other people whose names I did not catch.  Mea culpa! The decor is appealing – they have gone very much for the Moroccan side of the spectrum for the decor with brass-topped tables, a mosaic-tiled wall fountain and low banquettes strewn with richly coloured cushions. (A subsequent trip downstairs to the ladies’ did reveal a more Spanish-style room downstairs though.).  Service seemend a little distracted (odd, seeing as the restaurant was not particularly full), leaving us with unfilled glasses at regular intervals.  I also found the tables too low in relation to the banquettes for comfort, and although the multitude of cushions are pretty, they leave precious little space for… ummm… sitting! But it was early days and I was willing to withold judgement until the end of the meal. We ordered a selection of things off the starter menu, not all of which I got to sample.  The hummus got a good write-up from Michelle, as did the pastillas – sadly I got to sample neither.  I did try the olives which were delicious and the warm, fresh bread.  I started with the calamari rings which were good – light, crispy, tender and not too oily.  The albondigas (meatballs) were satistying and meaty but the mixed grill was underseasoned and dry.  Not a winner. Main courses included two tagines (one lamb and one vegetarian) and a seafood paella. The portion was generous and the seafood plentiful and tasty, but the rice was overcooked and mushy and there was precious little evidence that any saffron had been harmed in the making of this dish.  It would be forgiveable (just about) if it were not priced at £14.90 PER PERSON! But even less impressive was the vegetarian tagine.  Let me sum it up like as follows: this dish proved my theory that kitchen staff harbour a secret hatred for non-meat-eaters.  Described as root and vine vegetables in an aromatic broth, in reality it was undercooked peppers, various unidentified lumps and completely misguided peas (frozen) in a flavourless and runny sauce.  Far more succesful and, indeed, the winner of the night was the lamb tagine which was a perfect marriage of tender cubes of meat, warming spices, and an array of sweet fruit (prunes, figs and apricots).  Heavenly.  For a lower price per person that the paella, this was the far better deal. Desserts were not a roaring success.  The plate of traditional Moroccan pastries was dry, tastless and possibly stale (a great pity as there are few things I like more than a good, syrupy baklawa).  The ice creams were clearly not home-made and not inspiring.  And although the date and chocolate pudding sounded like a good idea, it was stodgy and pedestrian.  Good thing I hadn’t been saving myself for dessert! My favourite parts of El Cantara were only revealed at the end of the meal.  Firstly, the rooftop has been converted to a semi-covered shisha terrace where you can lounge under the huge Moroccan lantern on summer evenings sipping cocktails and smoking shisha – it’s all terribly louche.  The other highlight for me were the bathrooms (pictured above) – but then I am a sucker for a gold washbasin 😉

Sadly, on this occasion, the decor definitely outshone the food, which was mostly very average – and the prices were not dirt cheap (starters around the £5 mark; mains around the £15 mark; and desserts for £5 each). Verdict:  you can do a lot better in London at that price – stick to the shisha terrace and tapas.  But you are unlikely to find prettier bathroom basins anywhere!