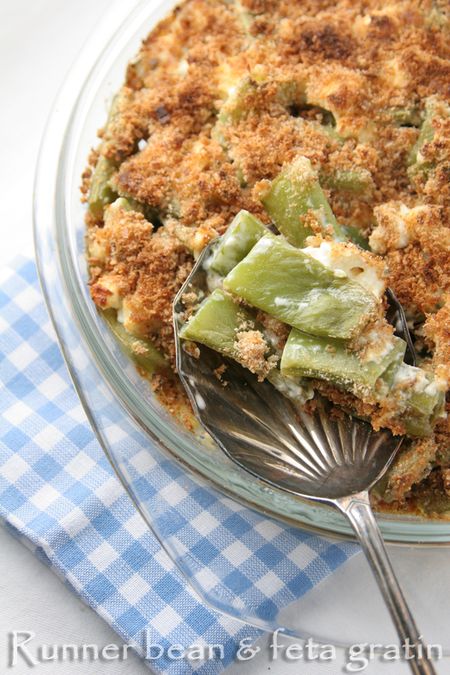 Ah, October.  How did you swing around again so fast?

… has the opal and the tourmaline as its birthstones

… begins in the starsign Libra and ends in Scoprio

It’s also the month when anybody in the Northern hemisphere with a vegetable garden loses the will to live when faced with another batch of runner beans.  You’ve steamed them, boiled them, made runner bean stir-fry, put them in casseroles and salads, and made runner bean soup with them.  And still, they come.

I’ll tell you now what – make runner bean and feta gratin with them.  It takes almost no time or effort, and it’s tasty enough to tempt even fussy eaters (the crispy cheesy crust makes them forget that they are eating greens, heh heh).  Think of it as my gift to everyone with an over-abundance of runner beans! Steam or microwave the beans until just tender.  Place them in a shallow oven-proof dish.  Pour the cream over the beans and season with salt and pepper.  Top with crumbled feta and breadcrumbs and bake for about 20 minutes until the cream has thickened and the breadcrumbs form a golden crust.

« Easy lemon brulée for A Taste of Yellow
Saturday Snapshots #111 »