You are here: Home / Events / DMBLGiT / The Spice Girls do London – and Cooksister does DMBLGiT August 2010 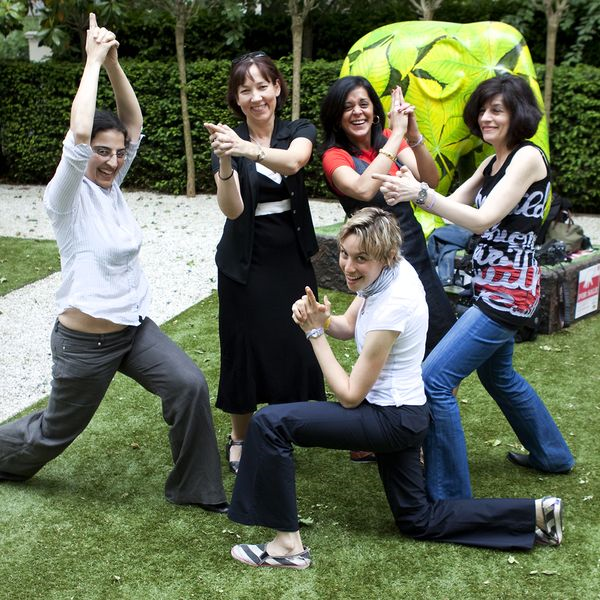 [Are you here for Does My Blog Look Good in This August ’10?  Simply scroll to the bottom of the post!]

So what do you say when you have to go and pick up two people from the airport that you have only met once before, and whom you have now invited to spend four nights in your house?

“Wait for me at the pick-up point outside. I’ll be the harrassed-looking one in the light blue Volvo, swearing quite a lot.”

Did they recognise me from that description?  You bet they did!

It is hard to believe that it’s already been over two months since the blogging Spice Girls descended on CookSister HQ and took London by storm.  I’m not sure I can even remember how we became the Spice Girls  – I would have said that we are more like a box of Quality Street:  all different but everybody is somebody’s favourite 🙂 But it is the Spice Girl moniker that stuck and so we transformed for the weekend into Sporty, Zesty, Saucy, Snarky and Sweary Spice. (For ALL the pics, have a look at my Spice Girls Flickr set.)

For the first night, we had planned a braai at CookSister HQ (already dubbed #braaiofthesummer on Twitter!).  Jamie jad brought her own body weight in cheese and soon we were tucking into cheese and pink champagne in the garden, while Nick tended the fire and pretended he hadn’t just lost control of his own house to a horde of excited Spice Girls!  A “heloooooo!” from the other side of the garden wall announced the arrival of Kerrin and Hilda:  a full comlement of Spice Girls!  The evening passed in a blur of excited conversation, spicy South African boerewors, chakalaka and koeksisters; followed by a sugar high blur as Kerrin produced all the chocolate bars in Zurich from her bag, and Jamie (to Nick’s delight) produced two big bags of Carambar 😉 (2 photos above – courtesy of Kerrin)

Friday morning we set off for Greenwich, just a tad later than planned (ahem!).  Our first stop en route was a brief photo call at Canary Wharf, and from there it was straight down to Greenwich and the historic Trafalgar Tavern for lunch.  This stately old building right on the water is reputedly where Lord Nelson drank, and certainly looked the part if you were wanting to bring visitors somewhere quintessentially English!  We ordered traditional fish and chips and some of the best mushy peas I’ve had in a while – even enjoyed by Kerrin who does not really do fried food (unless, of course, it’s SWEET fried food!).  From there we did a brief tour of Greenwich market but kind of got stuck at the Brazilian churros stand where the very lovely staff gave us a gigantic free sample.  Absolutely delicious and worth the trip to Greenwich to get one!  After a quick trip home, to we put on our glad rags and headed out to the FBC opening, but later that night Nick came home to find four girls tucked up in bed together, rehearsing their presentations.  He just rolled his eyes and went to bed.  He knows when he’s beaten 😉 Saturday morning got off to an early start and an operation planned with military precision to ensure that all four of us got our allotted time in the bathroom to beautify ourselves.  The rest of the day was spent at FBC (read all about it in my Food Blogger Connect ’10 post) and in the evening the five Spice Girls and Mowie made our way down to the river Thames for a stroll and dinner at the Tate Modern restaurant.  I had been to the restaurant before and had always enjoyed both the great view and the great food.  But, as luck would have it, they only got one out of two right this time – and let me assure you that it wasn’t the food.  In a nutshell, we ordered lemon sole; we were given plaice.  And when Kerrin called them out on it (go, Assertive Spice!), the manager had the gall to tell us “well, it looks almost exactly like sole… but it is in fact plaice”.  When we suggested that perhaps charging us sole prices for a cheaper fish that he had already admitted was not sole, was not the way forward, he once again argued with us.  It was a practical lesson in how NOT to do customer service, and I doubt I’ll ever be going back.  Nice view though…  Despite our most valiant efforts, we could not persuade Mowie to come home with us to watch DVDs and eat chocolate all night, so instead we headed home to tea, chocolate and Twitter – and yet more Spice Girl chat.  Who needs sleep? :o) (above 2 photos – courtesy of Kerrin) Sunday morning we were back at the conference but by early afternoon we were free to do our own thing.  In our case, this obviously could only mean one thing:  food shopping!  While Kerrin and Hilda went off to find a hot date shop (well, that’s what I heard anyway!), the rest of us headed off to Fortnum & Mason.  But we got sidetracked en route… by macarons!  I had forgotten that Laduree is right across the road from Fortnums and its siren song just proved too strong.  We emerged with a box of the precious pastries and headed for Fortnums where we bought a box of their macarons – purely for research purposes 😉  From there we said goodbye to Hilda and headed back to CookSister HQ to drink sparkly wine, have an impromptu macaron photo shoot, cook Meeta’s chicken curry, dance and sing in the kitchen, make plans for living together in a fantasy Spice Girl commune, and educate Kerrin and Jamie about the finer points of a-ha. And of course after dinner, we got round to tasting the macarons one by one (Laduree wins hands down in the comparative tasting – although their mimosa is like eating perfume, and Fortnums does get bonus points for chunks of nut on their pistachio ones) and watching… a certain DVD which features lots of French rugby players and not a whole lot of clothes.  Ahem!  Spicy. And just like that the weekend was over and we had to wave goodbye. We started the weekend as people who had e-mailed a lot but had  never really spent much time together in person.  We ended the weekend as Spice Girls bonded for life.  We had shared a podium; we had all shared my guest room bed (in a manner of speaking!); we had pigged out on churros and been taken for a ride by a London restaurant; we had cooked together, shopped together and sung together (about what we want, what we really, really want!). But mostly we had enjoyed three days of talking and laughter and discovering common ground in unexpected places; a weekend replete with the kind of warm fuzzy feeling that comes from being amongst friends who not only let you be yourself, but make you feel that you are being all you can be.

You chicas are all rock stars in my book and I love you like crazy. And back to the present day… yes folks, my dear friend Andrew is trusting me with his baby and letting me loose to host Does My Blog Look Good in This, the perennially popular food photography contest for (I believe) a fourth time!

So… what are the rules?

So how can you join in?