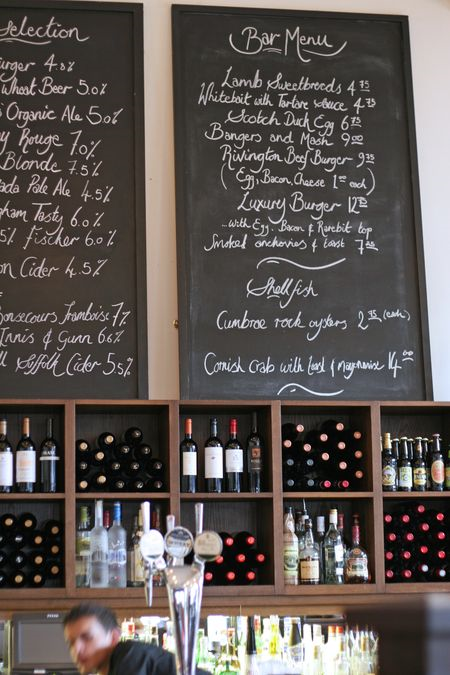 If you read in the newspapers that somebody arranged to meet up in person with some people that she’d met over the internet, and that a massacre ensued… you wouldn’t be particularly surprised in this day and age, would you?  I wouldn’t be.

And I’d have to say that this is pretty much what happened to me. :o)

I had only met Elisa once, at Food Blogger Connect in June; and I had only spoken to Ruth and Cathy on Twitter.  And we did arrange to meet up.  And a massacre did ensue.  The Great Rivington Lobster Massacre, that is!  But let me start at the beginning.

We had been discussing a TwEATup for a while and had decided on Polpo… but at the last minute there was a flurry of cancellations and in the end the majority of the remaining attendees were in the east – so we figured that for once we could go somewhere our end of town – which turned out to be the Rivington Grill in Greenwich.  It’s part of the Caprice group which also owns London stalwarts The Ivy, J Sheekey and Scott’s – so we were expecting good things.

I arrived in Greenwich on a hot summer evening to find my companions already seated outside, sipping on drinks. After some greetings and introductions, I headed for the bar to get something to drink from the extensive cocktail enu and retirned with what I seem to recall was aa berry moijito (no notes taken, I’m afraid – but it was delicious & very photogenic).  Our cascade of chatter was interrupted when a waiter walked past bearing bread for another table – in fact, the minute that the aroma of the freshly baked bread hit our nostrils, all four of our minds were focused on food and we made a committee decision to move indoors to our table. The interior of the Rivington is attractive – high-ceilinged with a mezzanine level, wooden floors, , squishy caramel coloured leather sofas near the bar, and white tablecloths with lots of sparkly tablecloths and glasses in the restaurant. The menu is brief, no nonsense, and relies strongly on British produce with dishes like Maldon rock oysters, Cornish crab, Elwy Valley double lamb chop, Devon Red chicken, and Anglesey sea bass.  But what had caught our eye was the Isle of Wight whole grilled lobster and chips for £27.  Surely, we enquired wistfully, this was not included in the TopTable 50% off deal that we’d booked under?  “Of course it’s included!” said our waitress.  As if we had been practicing our synchronised speaking for months, all four of us called out in unison:  “I’ll have that, please!”. Seeing that my main course was going to be super-rich, I opted for a light starter in the form of a Heritage tomato salad with lovage and Wensleydale cheese.  Top marks for prettiness – I loved the jumble of different types of red and yellow tomatoes, and I was thrilled to have them served at room temperature.  Nothing kills the delicate flavour of a ripe tomato faster than over-chilling!  The lovage and finely chopped red onions worked well with the sweet tomatoes and my only complaint was the single measly sliver of Wensleydale that I got (Cathey fared a little better with about 2.5…). Elsewhere, Ruth had the chilled beetroot and horseradish soul which she pronounced delicious. We also sampled some of the excellent Maldon oysters which were heavenly – creamy and full-flavoured. And then came… the main event.  Now I’ve ordered lobster in restaurants before, and often my dreamy visions of a giant red-clawed beast have been struck a cruel blow with the Reality Check Mallet when the dish arrives, to reveal something that should have been caught, tagged and released to reach (at least) crustacean puberty.  Not at the Rivington.  What we got was the lobster, the whole lobster and nothing but the lobster – and they were the big boys of the seabed – the ones that would hang about on streetcorners and bully the starfish into giving up their pocket money. Each beast was accompanied by a bowl of excellent homemade Bearnaise sauce (unnecessary but delicious) and fresh, crispy potato chips in a bowl endearlingly lined with branded Rivington paper.  Think of it as a posh version of a paper cone of chips.  Oh, and there was also a little jar of outstanding homemade mayonnaise – really good, creamy stuff.  And how was the lobster?  Heaven.  The meat was sweet, plentiful and moist.  In fact, it was so plentiful that we weren’t even tempted to try and eat the meat in the fiddly little legs – just the body and claws provided ample sustenance for our table. Silence descended on the table as all four of us went meticulously about our task with our fingers and the lobster-eating utensils provided, and slowly the pile of discarded lobster shells in the centre of the table grew.  “Looks like a massacre!” said one of us.  And thus was born the Great Rivington Lobster Massacre.  A veritable carnage of crustaceans. Desserts were always going to have a hard act to follow, considering how very good the main course was.  Even before we had arrived, Elise and I had already selected our preferred dessert off the internet menu:  honeycomb ice-cream with hot toffee sauce.  Murphy’s Law being what it is, when the waitress said:  “One of our desserts is not available this evening…” I already knew what she was going to say:  they were out of honeycomb ice-cream.  Noooooo.  In the end we settled for plain vanilla ice-cream instead.  The ice-cream itself was nothing special and the toffee sauce was nice, if not particularly memorable.  The best part for me was the shortest bit of shortbread I have ever had – it crumbled at the touch of a tooth.  Really fantastic.  Cathy had the Eton Mess (her first – she’s from Sweden) and pronounced it delicious; while Ruth thought her chocolate mousse was overly sweet and probably made with milk chocolate rather than dark.  So a qualified success in the dessert department.

Overall, I was very impressed with the meal – it’s not the sort of food you’d cross town for, but it must be a wonderful place to have as your local if you live in Greenwich – like a little piece of Central London landed south of the river.  That said, the prices are not cheap for the higher-end menu options (starters range from £4.50 to £14.50 for scallops; mains from £12.25 to £27 for the lobster) – but if you can get a TopTable discount like we did, the whole meal becomes extremely good value for money.

And here, for your viewing pleasure, are the Lobster Killers (pic courtesy of Elisa)!  You can also check out Ruth’s, Elisa’s and Cathy’s versions of the evening on their blogs. If you enjoyed this British restaurant write-up, you might also like to see my posts on the Cadogan Arms and the Lots Road Pub and Dining Room.

And in other news… nominations are now open for the 2010 South African Blog Awards.  I would REALLY appreciate it if you would take a few moments to click on the link below and nominate me in the categories Best Food & Wine blog and Best Overseas Blog.  Only the blogs with the most nominations go through to be finalists, so every nomination counts!! Pretty please with a blob of bearnaise sauce on top? When you click the link below, CookSister has already been selected as nominee in the abovementioned categories, so all you have to do is enter the security code displayed and a VALID e-mail address, then click on the link in the confirmation e-mail they send you. NB – you have to click the link in the e-mail that you will be sent, otherwise your nomination will not count!  Thanks ever so much 🙂