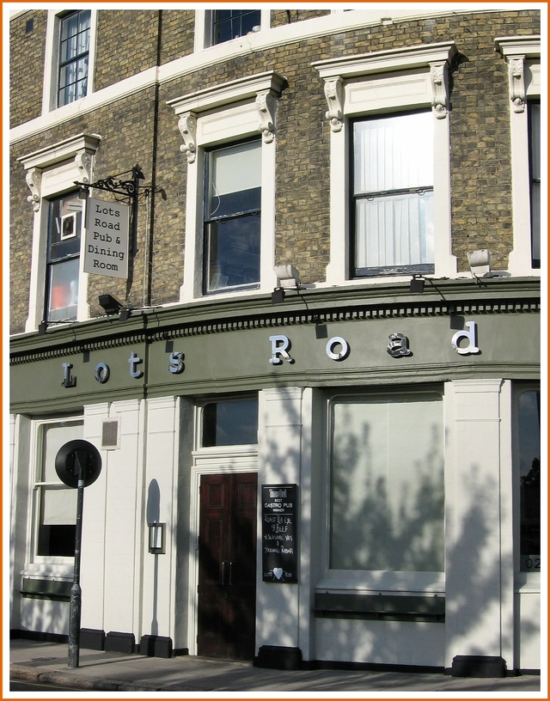 A couple of weekends ago, despite the huge attraction of lolling about in my sunny lounge and blogging on the laptop, Johanna persuaded me to meet up for lunch on the Sunday.  We had been discussing it for ages and she was keen to take me to Wizzy, a Korean place – but as Johanna arrived to fetch me from the train station, the first thing she told me was that Wizzy had closed down!  Clearly Johanna wasn’t the only one who found the service appalling…!  So there we were, on a sunny Sunday afternoon, at a culinary loose end, in West London.  What to do, what to do… But we food bloggers are a resourceful lot and soon the decision was narrowed down to a nearby Italian place that Johanna knows, or a Chelsea gastropub that Johanna had heard of. 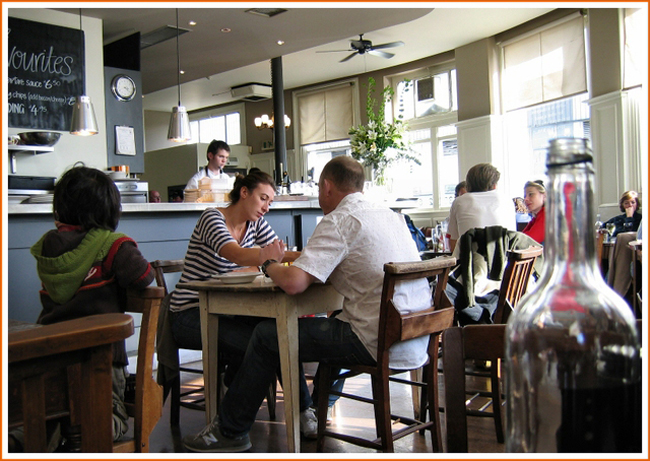 In the end the winner was the Lots Road gastropub that won our vote.  Lots Road won the Time Out Best Gastropub award in 2002 – no mean feat in a city full of gastropubs – and is still listed among their Top 10 Gastropubs in London.  The pub is situated in a curved Victorian building near the Chelsea marina.  This makes for a lovely interior – high ceilings, the gentle curve of the room and sunlight streaming through the large windows.  The furniture is more on the shabby chic than the slick designer end of the decor spectrum, but together with a couple of squishy leather sofas in the back and a pile of Sunday papers, this makes for a warm, welcoming ambiance. 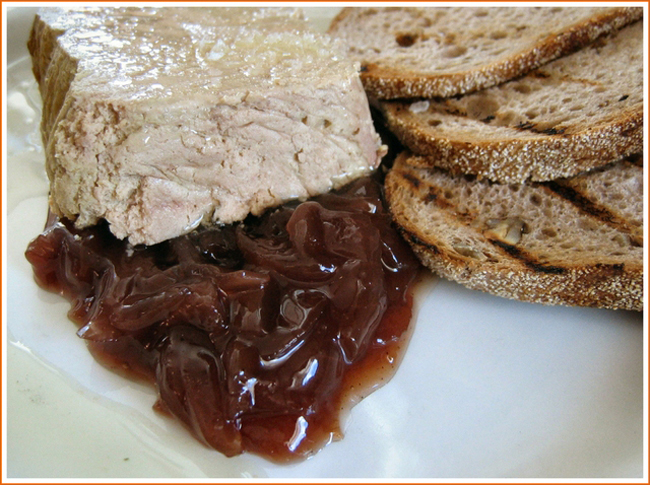 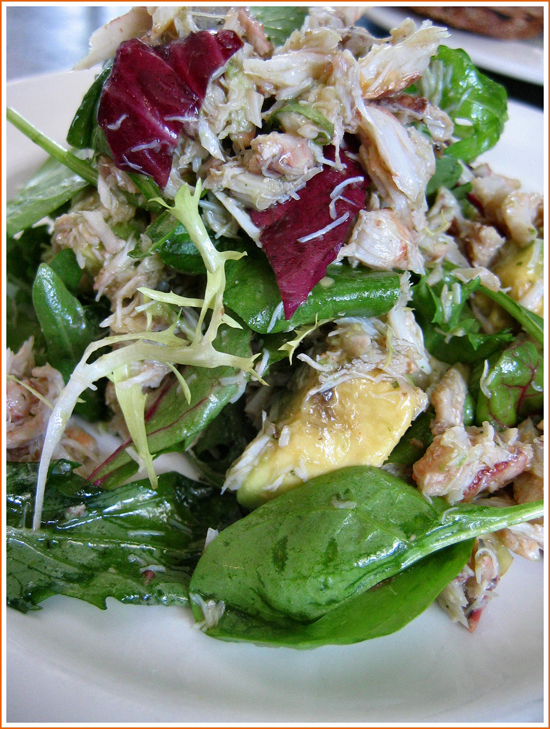 As we always do, Johanna and I decided early on to try as many different dishes as we could.   However, because neither of us felt that hungry, we plumped for a starter each and a shared main course, as the main course choices were rather heavily biased in favour of roasts.  I’m not sure if this was because it was Sunday, but I recall at least three roasts on the main course menu and although I’m sure they were excellent, none of them tempted me at all.  There was a distinct lack of the slightly quirky traditional dishes you often find on gatstropub menus – maybe this is different on weekdays.  However, the starter menu had plenty to get excited about. I chose the parfait of foie gras and Johanna went for the crab and avocado salad – but we agreed to split them both.  The parfait (pictured on the left) was just heavenly, with a light texture, a deep flavour.  It was served with perfectly toasted slices of hazelnut bread and an excellent gooey red onion marmalade – perfect accompaniments.  Yummy.  Halfway through we swapped plates and I got what Johanna had ordered: the crab and avocado salad.  This contained a nice mix of fresh leaves, a good portion of proper crab meat (not crabsticks) and that very elusive ingredient (in London, anyway):  truly ripe avocado! It was a delight to eat the yielding buttery cubes, so different to the watery, hard avocado that you are often served here.  The salad was dressed with a mild dressing and was in my book as close to comfort food as cold dishes can get. Because we wanted to leave room for dessert, we decided to split a main course.  After being singularly uninspired by the selection of roasts, we decided to stick with a pub classic:  the mighty hamburger.  We had seen the height of the burgers being brought to other tables and and there was just no way we would be able to slice one neatly in half, so we asked our waiter whether we could have our burger cut in two and served on separate plates. Oh dear – wrong question!!  We were assured that this would make the chef “very angry”, but when it arrived it was in two neat pieces, on separate plates.  Maybe it was the two cameras on the table that terrified them into submission! 😉 Anyway, the burger was very good – proper steak mince and char-grilled to medium rare perfection, topped with cheese and bacon.  It was served with mixed leaves and good, fat potato chips, and even half the portion was rather filling. 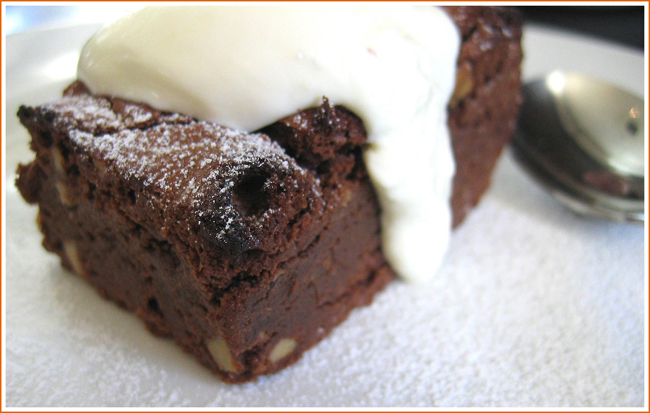 And after all that, with the room we’d saved by sharing a main course (hahaha), we felt we could afford a dessert each.  I went (rather predictably!) for the chocolate brownie served with creme fraiche.  Johanna had seen and fallen in love with the look of another diner’s apple and raspberry crumble earlier, and ordered that.  But desserts proved to be the least inspiring part of a meal.  My brownie appeared to have been reheated for too long, resulting in a top layer that was positively crispy.  And crispy is not a texture I want in my brownies!  The flavour was good and the bottom half still moist, and I liked the tart creme fraiche accompaniment, but I have to say I have had better brownies (the ones at The Cafê Below) rock my world).  And Johanna didn’t fare much better – when her crumble arrived it was disappointingly berry-less!  Although I understand that ingredients do run out towards the end of the service, it would have been good if the waiter had informed her that there were no more berries left – particularly in light of the fact that the intensely red remains of the berries on another person’s plate had been what prompted her to order the dessert in the first place!  It also seemed as if a serving of stewed apple had been scooped onto her plate and the crumble sprinkled on afterwards, not all oven-baked together.  But if you forgot all that and tasted it, it was a tasty plate of apple crumble with good ice cream, and there’s no sin in that.

The bill (with water, a glass of wine for me and service) came to £20 per head which is pretty reasonable for the area and the quality of the ingredients.  For a long lunch and perusal of the Sunday papers over a cappuccino, this is a lovely, relaxed venue with well above-average food.