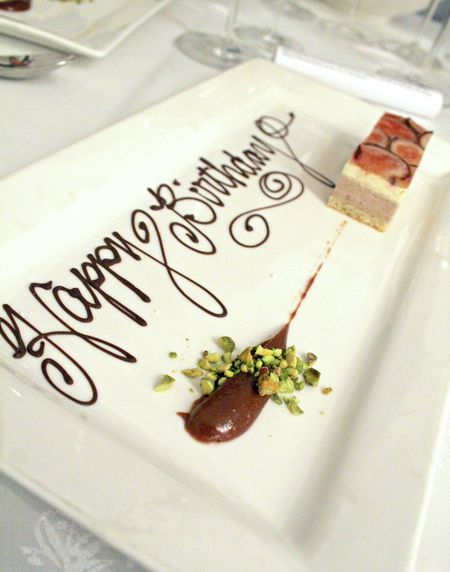 There are many things in life that I do not understand.  Quantum physics.  The popularity of Dan Brown books.  The offside rule in football.  Men.  And people who go to a high-end formal restaurant and then complain that the service was “too attentive”.  If you want casual service, perhaps you should try the Spur.  Or would you prefer eating an expensive meal with inattentive service, where you are left to languish with no food or drinks for hours while vainly looking for a server?  Me, I like having a fuss made of me when I go out to an expensive restaurant.  I like feeling like a VIP for the evening, rather than the annoying bit of dirt stuck to the shoe (which is how some London restaurant staff make you feel!).  So when I visited The Roundhouse in Camps Bay, Cape Town, earlier this year and one of my companions mentioned to staff that it was by birthday, I was thrilled to receive the complimentary dessert pictured above with its subtle chocolate message ;-).  Go ahead – make a fuss of me!  I’m a sucker for that sort of thing.

The Roundhouse is (as the name suggests) a round guard house built in the late 1700s to prevent enemies from attacking Cape Town from the Camps bay side via Kloof Nek.  It is now a National Monument and achieved a degree of fame in the early 1800s when it was used as a hunting lodge by the then Governor of the Cape Colony, Lord Charles Somerset.  Somerset and his friends used the lodge as ther base when they went out to shoot lions, leopards and buck on the slopes of Lion’s Head.  But despite the fact that Lord Charles Somerset’s is the name that most people associate with the Roundhouse, it was in fact owned from 1814 till 1837 by Jan Carel Horak, a butcher from Cape Town who grazed his livestock on the surrounding farm, and also happens to be my great-great-great-great great uncle. Since then, the Roundhouse has been a tearoom, a boutique hotel, and a derelict building with a million dollar view.  Since 2008, however, it has been lovingly restored and opened as an upmarket restaurant and was named one of the top 10 restaurants in the country in last year’s Eat Out restaurant awards.

The attentive service starts as you reach the bottom of the steep, secluded driveway lined with ancient pine trees and smiling staff welcome you to the restaurant.  As it was a perfect Cape Town late summer evening we joined our friends on the grassy terraces below the restaurant (where breakfast is also served) for a bottle of sparkling wine before dinner – I think it was Villiera Brut, but there is also an impressive range of Graham Beck sparklers on offer, alongside some French ones.  Once we moved inside to our table, I was greeted by name and wished a happy birthday by all the staff who attended to us, and the menus we were given all had “Happy Birthday Jeanne” printed at the top – costs nothing but such a lovely gesture! While we were considering the menu, a board containing nibbles appeared: marinated olives, lamb croquettes, and toasts with a little pot of heavenly truffled cream cheese.  Everything was flawless and I do have to wonder why lamb croquettes are not more popular or widely available!  The staff were knowledgeable about everything on the menu which made a nice change, but could probably have stopped short of explaining every single menu to us –  the written descriptions were perfectly clear.  But this was hardly a major flaw!  The menu is divided into starters, fish courses, meat courses and desserts, with four options in each section.  Diners can choose to have either 4 courses for R395 (R595 with matching wines) or 5 courses for R490 (R740 with matching wines).  But unlike most high-end restaurants where 4 courses means one from each section, or a chef’s menu, The Roundhouse lets you have four of whatever you want. Two meat and two dessert courses?  No problem!  Four desserts?  No problem at all! This is perfect if you are like me and usually find the starters the most exciting thing on the menu! To start with I chose green asparagus with a fried duck egg, truffle vinaigrette and a Parmesan tuille.  It scored top marks for looking fresh, summery and pretty and the taste lived up to the looks.  The crunchy asparagus were fresh and flavoursome, while the truffle vinaigrette was properly truffly and complemented the egg beautifully.  I loved both the salty hit and the crunch that the parmesan tuille provided.  Nick had the cured cob with avocado and a tempura oyster, which was like a version of ceviche and truly delicious. None of the meat courses particularly excited me, so I followed my starter with two courses from the fish selection.  First up was the North Atlantic scallops with cauliflower puree and popped wild rice.  I am a sucker for scallops and cauliflower, but this dish was just stellar in every way.  The scallops were perfectly seared but not overcooked and perfectly seasoned to offset the sweetish cauliflower puree.   The popped rice was a stroke of genius, providing both some crunch as well as a toasty, smoky flavour that complemented the rest of the dish.  I followed this with the West coast crayfish tortellini with a litchi and ginger veloute  This turned out to be one of those dishes that sneak up on you.  The tortellini were a sure thing – perfectly al dente and generously filled with sweet crayfish meat.  But it was only after a few spoons of the veloute that you realised how addictive it was: slightly sweet (which went well with the crayfish) but with the ginger never allowing it to become cloying.  I could easily have had a bowl of this as a main course! My carnivorous husband had the slow roasted pork belly with apple puree, sumigi mushrooms and Calvados jus – a very happy marriage of tender porky goodness, crisky crackling and the sweetness of apples and Calvados. After our complimentary pre-dessert of a little glass of vanilla pannacotta with strawberries, I ordered the apricot soufflé with Amaretto ice cream.  I never make soufflés at home, so when I see them on a menu it’s a no-brainer.  This one was served in all its golden, puffed up glory and then carefully pierced by the server’s spoon in order to slip a spoonful of Amaretto ice cream into the centre.  I love soufflé served like this as it means the flavour of the ice cream permeates the dish, and this certainly was the case here.  The soufflé had a great flavour – apricots and yellow cling peaches galore, rather like a dessert wine in sold form.  The Amaretto ice cream added a nice edge to the flavours and the entire dish was beautifully balanced.  My complimentary birthday dessert consisted of the baby organic fig and orange blossom parfait with honey caramel & pistachios. If anything, I found this a little too sweet, but I LOVED the way it looked, covered in a mosaic of glazed baby fig slices.  A nice touch was that each of us got a different glass of dessert wine to match our dessert – I’m afraid I wasn’t taking notes by then, but suffice to say that all four were delicious.

I don’t know where, but I still found space to share a cheese platter, plus we had two bottles of the lovely 2001 Grangehurst Pinotage.  At R650 per person, this was at the top end of South African restaurant pricing, but if you compare the price in GBP to what you would pay for a similar meal in the UK, it is a positive bargain.  I was impressed by the efficient and charming service; the beautifully appointed rooms; the concise but tempting menu, and the flawlessly executed, innovative food.  Although the pricing means that you probably won’t be hanging out there every Friday night, I can think of few places in Cape Town that would be better for a special celebration to remember.  Who knew that returning to the ancestral lands could taste so good!

If you enjoyed this review, you might like to see some of my other Cape Town restaurant reviews such as La Colombe and Aubergine.