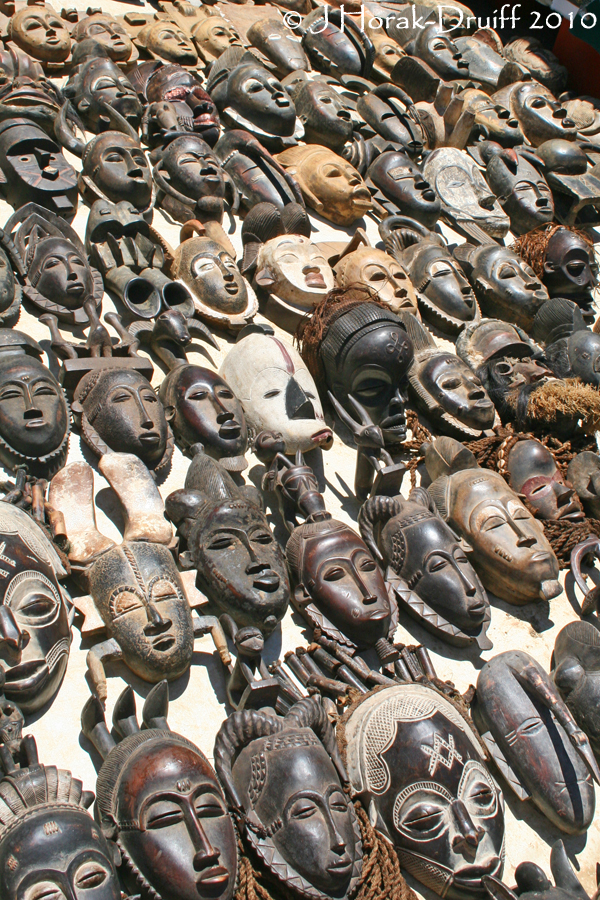 The Greenpoint market was, for many years, one of the two best-known markets in Cape Twn (the other being Greenmarket Square).  Over the years, Greenpoint market became known as one of the best places to buy crafts from all over Africa as the vendors became increasingly international.  It would not be uncommon to buy a beaded bowl from a Zimbabwean, a carved mask from a Nigerian and a bronze leopard figurine from Benin but sold by a chap from Cameroon – all in the space of one visit!  The market used to take place every Sunday in the parking lot of the Green Point Stadium, but traders have since been relocated as the old stadium was demolished and the entire area regenerated to build the spectacular Cape Town Stadium for the FIFA 2010 World Cup. As the World Cup kicked off yesterday with a spectacular pan-African opening ceremony, I though it only fitting to post this photo of masks from around the continent for sale at the old Greenpoint market.

This is part of a series of non-food photographs that will be published every Saturday on CookSister – all previously featured  photographs can be viewed on the Saturday Snapshots compendium page.  All photos featured in Saturday Snapshots are available to buy as high-quality greeting cards or prints in my RedBubble store. They make gifts, for friends or for yourself!