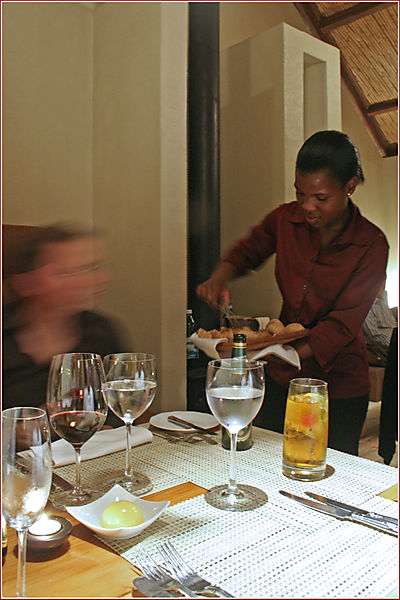 Right, boys and girls, it’s trivia time!  One of the following statements is false.

1.  An aubergine is richer in nicotene that any other edible plant.

2.  Aubergine is a popular girls’ name in Namibia.

3.  Aubergine is an award-winning restaurant in Cape Town.

Lucky for me, the third statement is definitely true, and it’s here that our fab friends Anthony and John had booked a table for our first night in the South Africa a few months back.  If I had drawn up a shortlist of restaurants that I wanted to visit on this trip, Aubergine would definitely have been on it, along with La Colombe, but it seems that Ant & John were way ahead of me and by the time I got round to focusing on where I wanted to eat, they informed me that they’d already booked a table.  Hurrah!

Like many restaurants in Cape Town, Aubergine is situated in a character-filled old house in Gardens.  The house itself has quite a history, having once been the fashionable 19th century home of Sir John Wylde, first Chief Justice of the Cape, and having boasted an estate of several acres.  Sir John was a colourful character, to say the least, but his elegant table and fine wines were renowned and it is this spirit which Aubergine seeks to perpetuate.  Owner and chef Harald Bresselschmidt (originally from Belgium) comes with an impeccable culinary pedigree, having studied in various European countries before moving to South Africa in the 1990s.  He was responsible for getting Bosman’s Restaurant at Grand Roche in Paarl named the best restaurant in South Africa for two years running before opening Aubergine in 1996. Aubergine has also been a regular fixture on the prestigious Diners Club Dine Awards winners lists since its opening.  Harald’s style of cooking is a successful marriage of European and Asian techniques, but reworked to incorporate the finest quality authentically South African ingredients.  I was intrigued already.

The building has been extensively renovated and is decorated in warm natural materials, with an open plan bar leading to the dining area.  There is also a mezzanine area which (I think) is more of a lounge bar than part of the dining area, and a beautiful outside courtyard dining area (sadly, it was too windy to sit outside the night we visited). To accommodate the mezzanine level, the ceilings have been removed which makes for a lovely airy feel but I was worried that, as in many restaurants lacking in soft furnishings and interior partitions, the noise levels would be uncomfortable.  But I needen’t have worried – some clever design feature (the beautiful reed ceilings?) made the noise comparatively muted – hurrah!  The service, which is often the downfall of high-end South African restaurants, was friendly and excellent all night:  nothing was too much trouble and our waiter was charming.

And so, to the food.  The menu is of a restrained length but provided an agony of choice, with the East meets West in Africa theme very much in evidence.  The wine list was extensive but there was very little that I would have classed as affordable or good value, which is a pity.  I must also confess that I did not make a note of what we eventually ordered as I was too busy talking to fellow-blogger Sophia who had joined us for dinner. I may as well also apologise now for the hit & miss description of the dishes – I didn’t ask for a menu and I was too busy having a good time to want to take notes – mea culpa!  These notes were made the following morning.

The amuse bouche was a pretty little bite – a rustic terrine (made with pork and mushrooms?  Truffles?), served with sweet and sour butternut and pistachios.  This was a great combo, with the flavourful and salty terrine contrasting beautifully with the butternut.  For my starter I had steamed calamari tubes with a fresh basil dressing, aubergine “caviar” and roasted cherry tomatoes.  That translucent red shard was some addictively crispy tomato skin – talk about beauty with a purpose! The calamari tubes were butter-soft and filled (I think) with some kind of forcemeat, and the roasting had exquisitely intensified the flavour of the cherry tomatoes.  A winner.  Sophia had one of the Aubergine specialities:  an aubergine and goats cheese souffle which was light but intensely flavoured and delicious. This was followed by a palate-cleansing sorbet – a lovely peach flavour which made a nice change from the usual lemon.  Choosing my main course had been agonising as there had been so many delicious contenders, but in the end I had to go for the option that I would never get on a London menu:  warthog.  Yes, I cannot tell a lie – I ate Pumbaa.  My two medallions of warthog came topped with herb mousseline and accompanied by black cherries and homemade spatzle.  I must say, I thought (and hoped) that the warthog would be a bit… well, gamier.  As it was, the meat may as well have been pork fillet medallions:  tasty, but not exactly exotically flavoured.  I found the herb mousseline to be tasty but a little stodgy for my taste.  The cherries and spatzle, however, were quite divine.  No sooner had my main arrived than I was struck by a serious case of menu envy.  The first attack came when I had a taste of Sophia’s main of 5 “pralines” of rare beef, each with a different flavoured crust (pesto, parmesan, and various others); or Anthony’s main of ostrich in a Thai green curry sauce – an unexpectedly sublime combination (not pictured).  Nick took a walk on the wild side with perfectly rare kudu steak, and John had the East meets West fish platter – I’m afraid I didn’t take proper notes, but broadly speaking, these was a dish of Asian-inspired fishcakes on noodles (East), and some goujons of white fish in a creamy sauce on asparagus and spinach (West). After this, everyone was too full for individual desserts, but we ordered two to share among the five of us.  The first was a tuille-topped pannacotta with stewed cherries and mango sorbet.  Not only was this gorgeous but each individual element was perfectly executed – particularly the sorbet which tasted quite simply like unadulterated frozen mango flesh.  The panacotta itself was perfectly trembly, and I loved the crunchy contrast of the tuille.  Our other dessert was a platter of thinly sliced pear with Camembert and pistachios – simple and delicious.  Coffee was accompanied by a complimentary plate of petit fours that were bite-sized works of art, particularly the little jewelled fruit tarts (see my Flickr album for pics).

Even leaving aside the fantastic company (!), it was a delightful evening.  And at R1,280 for five people (about £85) with wine, water and service, I thought the price was far less than the restaurant’s reputation might suggest.  When we had questions, our charming waiter was able to answer them; when we needed an extra cushion, our charming waiter supplied one.  Everything we ate spoke of excellent local ingredients and well-though out combinations of flavour and texture.  The food was unfussy and not garnished to death, but every element on the plate clearly had a role to play and played it to perfection.  Fusion food these days has become almost a derogatory term and a byword for bizarre and ill-considered combinations.  But Aubergine manages to fuse authentically South African ingredients with European and Asian cooking styles, without any jarring cluture clash.

In brief: If you are in Cape Town or planning a visit soon, Aubergine is a wonderful introduction to how good South African fusion food can be, and the price is surprisingly reasonable given its stellar reputation.

If you are still in suspense about the trivia quiz, number 2 is false.  If you want to see more of my restaurant reviews, click here.  And if you are wondering what suddenly motivated me to post this review after it had been languishing in my drafts folder since March…?  Only the fact that our uber-fabulous friends Anthony and John who accompanied us to Aubergine got hitched last weekend!  Well done guys and tons of love to you both 🙂