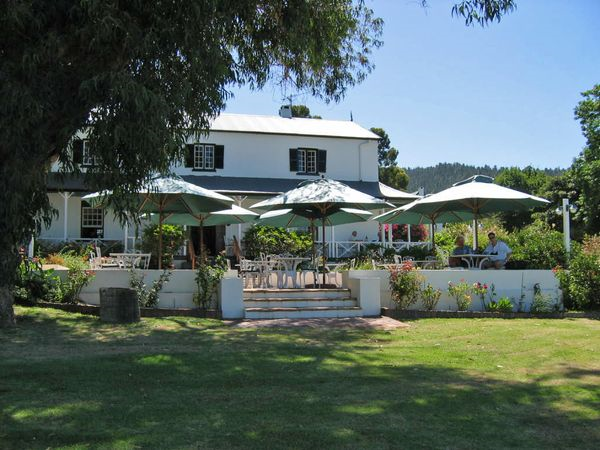 South Africa’s Garden Route coastal road between Cape Town and Port Elizabeth is over-endowed with all sorts of things – natural beauty, exceptional beaches, outstanding restaurants, and a myriad of towns where visitors can stop, stay and find novel ways to occupy themselves.  I have recommended dozens of restaurants, B&Bs and other activities over the years to friends visiting this gorgeous part of the world, but there are two places that I tend to emphasise more than others.  The one is Plettenberg Bay (about which I wrote in my review of Fu.Shi last week); the other is Knysna.

Knysna (the K is silent – say nigh-z-nah) is a dramatically beautiful town situated about 300km west of my hometown of Port Elizabeth – two towering headlands protect the entrance to a large lagoon.  The unusual name probably comes from the indigenous Khoikhoi word meanins ferns as the area was covered in near-impenetrable indigenous forests. In 1804, George Rex (a Cape Town timber merchant rumoured to be the illegitimate son of King George III) bought the land around the lagoon from one Stefanus Terblans and founded the town.  Rex found that transporting timber by ox wagon to Cape Town was a near-impossibility and so set about investigating the possibility of building jetties and transporting the timber by sea through the treacherous Knysna Heads.  Although the first ship ran aground, eventually a fairly safe route was found and Knysna was put on the map as the heart of South Africa’s timber industry.  Despite many shipwrecks in the treacherous straits, timber exports from Knysna harbour continued until 1954 when the harbour was closed to cargo and became a small boat harbour, as it remains to this day. In 1830, George Rex’s son-in-law Thomas Duthie bought the farm Belvidere from him, nestled in a cove at the western end of the lagoon.  It was here that Duthie and his bride Caroline built a small cottage for their family and later in 1849, a larger house overlooking the lagoon.  The house is still standing and is now the main building of Belvidere Manor Hotel, one of the most beautiful and tranquil places to eat and stay along the entire length of the Garden Route.  Guests are accommodated in a series of luxury cottages leading down the gently sloping gardens from the manor house to the lagoon, with each cottage following the simple tin-roofed colonial style of the manor house.  The garden with its central pool and gazebo is home to dozens of species of indigenous birds (including rare Knysna loeries) and is a little piece of heaven. Although excellent dinners are served at Caroline’s Bistro in the manor house, and pub lunches and dinners are available in The Bell Tavern (a beautiful pub housed in the Duthie’s original cottage), the meal that I most enjoy at Belvidere Manor is a light lunch on the terrace, gazing over the lagoon and listening to the oriole singing in the gigantic and ancient eucalyptus tree.  In fact, I make a point of stopping for lunch whenever we drive the Garden Route.  Whether you are staying for a week or only coming by for lunch, staff are exceedingly friendly and welcome you like long-lost family.  Nobody that has visited Belvidere Manor will ever forget Jeffrey and his refrain of “Number one!” or “Too good to be true!” and his ever-present grin. The menu is a shorter version of the Bell Tavern menu and is full of crowd-pleasing light meals including excellent salads, sandwiches and burgers; plus there is a range of tempting cakes and baked goodies for dessert or afternoon tea. On my most recent visit, I had one of my favourite dishes: crab cakes with sweet chilli dipping sauce.  Unlike most crabcakes, these generous specimens contain more crab than potato, and are delightfully crisp without being oily.  As you can see, the side salad is more than generous – all in all, a perfect light meal.  Of course, I seldom stop there as the cakes are always too tempting.  On this occasion I had a cheesecake with berry coulis, which was a proper, dense, baked cheesecake rather then the gelatine-laced fridge tarts that are often passed off as cheesecakes. Together with its homemade berry coulis, it was a feast for the eyes as well as the tongue. The meal, with a glass of wine and service charge came to about R100 per person which is a very reasonable price to be made to feel like an honoured guest and sit in a flower-filled garden feeling like visiting royalty for an hour or two.  Whether you choose to stay the night (prices start from R700 per person in a garden cottage, including generous breakfast), host a function, or simply stop for a meal, Belvidere Manor is one of the best-kept secrets on the Garden Route.  I should know – I got married there nearly ten years ago!