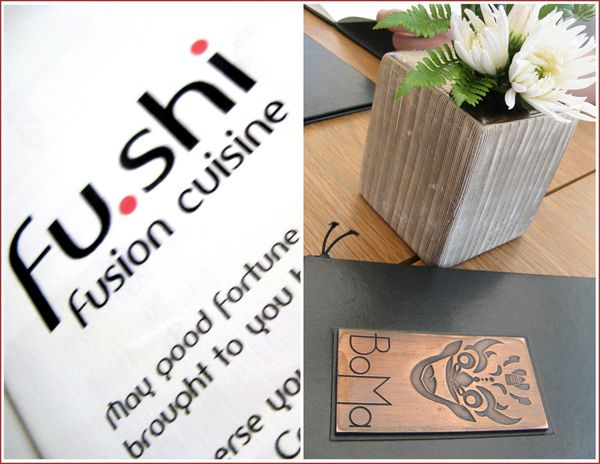 I have written before about my long-term love affair with Plettenberg Bay.  I have spent so much time there that I sometimes feel more affinity for Plett than the city were i actually lived!  Over the 35 years or so that I have been visiting Plett, I have seen many changes, most of which dismay me.  The relocation of the charming little primary school on the hill to a desolate site near the freeway; the redevelopment of The Cave nightclub into housing; the rampant housing development on the ridge overlooking the town and all along Robberg Beach; the unattractive new shopping centres built in the main street; and the disappearance of Lookout Beach in a storm about 2 years ago.  Progress – it’s a mixed blessing.  But the one thing which has improved in leaps and bounds and which I grudgingly have to accept has benefited me as a visitor, is the surge in excellent dining options.

One of these was recommended to me by a friend who is a professional chef – so how could I refuse?  Fu.Shi is situated at the top of the Upper Deck, a new building on the corner of main street diagonally opposite Plett stalwart pizza restaurant Cranzgots.  The complex houses Fu.Shi as well as the BoMa terrace and has a panoramic view across town and down to where the golden crescent of Keurbooms Beach meets the electric blue of the Indian Ocean beneath the Outeniqua mountains. Fu.shi (meaning happiness, good fortune, prosperity) opened in 2006 and is owned by Ara Manuelian and Noelle Bolton.  As executive chef, they appointed Vanie Padayachee who had worked at top restaurants such as La Quartier Francais, the Plettenberg Hotel and Grand Provence Estate. Vanie (who was still the chef when I visited last year but has subsequently moved on to found the African Relish cookery school in Prince Albert) drew on her extensive travels to the Far East to devise a menu that deftly fuses Eastern and Western cuisine.  There is an excellent sushi menu as well as a full a la carte containing dishes named rather like Confician analects:  Dappled Sunlight on Crystal Water; Feisty Morsels on a Distant Cloud; or Torn Clouds Over Foamy Seas.  The ambience is chic yet calm in a Zen-ish fashion and view is maximised with picture windows and glass balustrades on the terrace.  If you are nosey, you can also watch the sushi chefs at work in their little glass box of a sushi kitchen by the entrance. On our first lunchtime visit we sat on the terrace at BoMa drinking in the view and the perfect weather. In the midday heat, we opted for sushi and salads – and we were not disappointed.  The artichoke and mangetout salad was a nice contrast between the soft artichoke and the crispy mangetout and was topped with shavings of very good Parmesan cheese.  We also opted for a platter with tuna and salmon sashimi and nigiri, all of which was fresh and outstanding.  My vegetarian friend had the avocado maki rolls – which were probably the biggest surprise to me.  Most maki rolls that I have had in the past have been wrapped in seaweed the consistency of old boots.  These, however, had a wrapping of fresh and delicate seaweed that had a taste (as opposed to the taste of old boots!) and a consistency that you could actually bite through.  A revelation!  When it is available, the restaurant also serves yellowtail (a local fish) sashimi which is delicious and well worth trying.  Sushi ranges from about R30 – R45 for a portion of 3, 4 or 6 pieces; and assorted platters range from R140-R150. In fact, we enjoyed ourselves so much that we went back later that same week for dinner, this time in the Fu.shi restaurant.  The restaurant was packed and service was a little slow, but it was very friendly and as we weren’t in a hurry, this wasn’t a big issue.  We started with yet more sushi, after which Nick had slow-braised chilli and garlic lamb (aka Angry Samurai!), and I had a heavenly dish of black tiger prawns in a turmeric and lemongrass cream on glass noodles (Stolen Moments of Ecstasy – indeed!).  But the stars of the show were without a doubt the desserts.  I had a Concubine’s Whisper which is a chilli chocolate fondant with pistachio brittle.  The chilli/chocolate combination can sometimes be unbalanced, but here the flavours were in perfect harmony and the deep chocolate flavour lingered with just enough of a tingle of chilli to liven things up.  But despite the deliciousness of my dessert, I still suffered menu envy when I tasted Nick’s.  He had gone for Kissing Behind the Mountain – a wasabi creme brulee.  I must admit, I was a bit wary, thinking that it might be amazing or it might be an ill-conceived experiment.  But one spoonful was enough to allay my fears – this was perfection on a spoon!  The creme brulee had a lovely thick consistency, specks of vanilla seeds and the usual burnt sugar and vanilla flavours, but each mouthful ended with the subtle palate-cleansing zing of wasabi.  Utterly, totally addictive and worth a drive to Plett just to have it. As we had brought along a rather special bottle of wine from our collection, I did not have a look at the wine list – mea culpa.  Instead I will tell you about the Rhebokskloof 2001 Chardonnay Grande Reserve (15.5% alc) which we had.  The 8 years of bottle age had done it no harm at all and had turned the colour into an incredible deep honey gold.  The nose was promising with zesty clementines and sweet vanilla notes.  On the palate, it had taken on characteristics of a dessert wine (dried apricots, sweet citrus fruits and complex nutty flavours), but there was no hint of sherry-like oxidation. The wood was definitely present but subtle and beautifully integrated. And the finish was astonishingly long – all in all a fabulous wine to go with a fabulous meal.

Although I would not say Fu.Shi is cheap, it certainly is not badly priced, with starters from R35-R50 and mains from R85-R110 (more for the soft shell crab).  The setting is so glamorous, you do feel a little as if you have steppd into a movie and as I said, the view is spectacular.  But most importantly, the food is outstanding:  innovatively created from carefully-sourced ingredients.   Just make sure you leave room for the wasabi creme brulee!