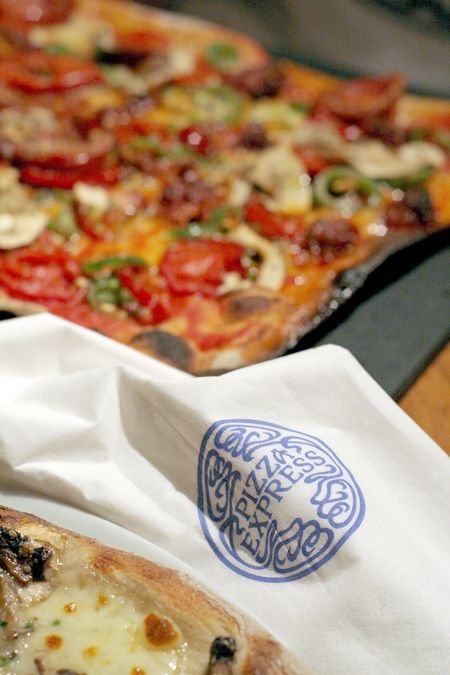 Call me easily pleased, but I think Pizza Express gets a raw deal.

When I suggest going to a branch of this ubiquitous chain of Italian restaurants for a quick meal, my husband Nick pulls a face and refuses – and he is not alone.  But can somebody please explain to me why people get so sniffy about the place??  Yes, they use electric rather than wood-burning ovens; yes, I suspect that the dough for their bases comes out of some big central site, not lovingly made on the premises by little old Italian nonnas; and yes, there is a depressing sameyness about being able to eat exactly the same food in every metropolitan area in Britain.  But all that aside, considering the volumes we are talking about, they churn out a pleasingly thin-crust (as opposed to the travesties at Pizza Hut!) and fairly consistent pizza, there are always fresh flowers on the table, and I would be lying if I did not confess a small addiction to their dough balls 😉

But what would happen if you combined the regimented uniformity of the Pizza Exprress approach with some culinary inspiration from a renowned Italian chef?  Francesco Mazzei, acclaimed for his authentic, refined Calabrian cooking at L’Anima, has provided the answer by agreeing to create six new menu items for Pizza Express.  And earlier this year, a bunch of food bloggers were invited along to meet the man himself, sample the dishes, and to try their hand at pizza-making at the Curtain Road branch of Pizza Express. Even Nick was excited – as was I.  What girl wouldn’t be, with the prospect of meeting the man who introduced spicy Calabrian sausage to London? 😉 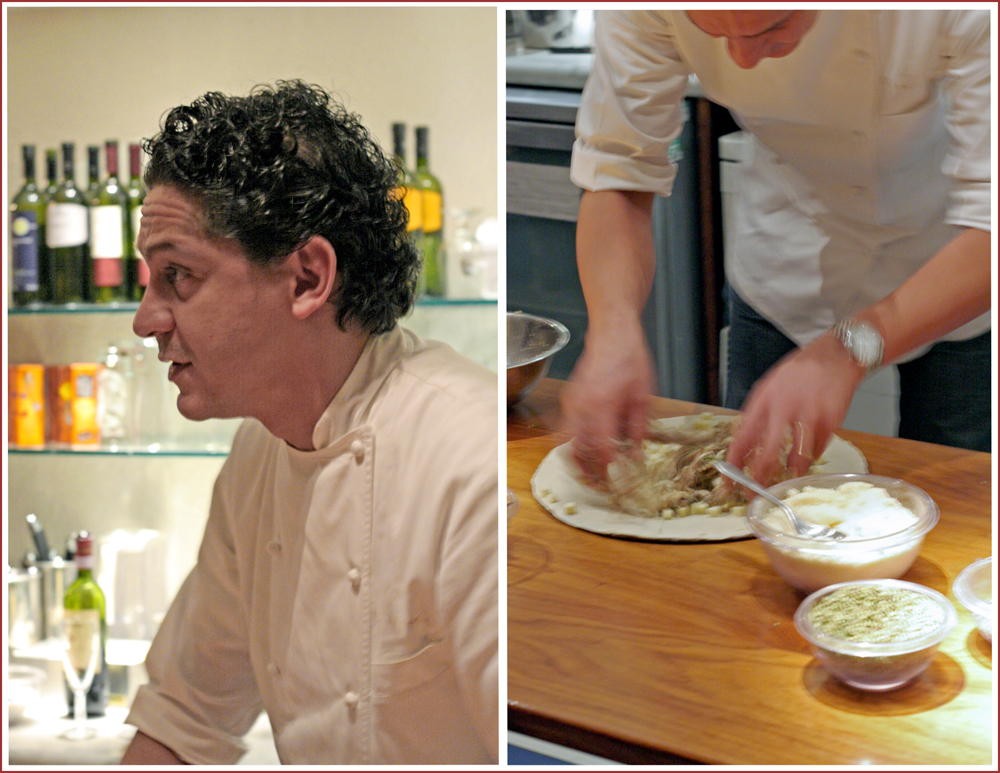 While we waited for the man himself to arrive, we chatted to fellow food bloggers Dinner Diary, Food Stories, Cheese & Biscuits, Hollow Legs, and met the lovely Mathilde’s Cuisine and the Ginger Gourmand.  At the same time we were snacking on the first two items that Francesco has added to the menu:  the Insalata Semplice (torn ciabatta bread, buffalo mozzarella, vine and santos tomatoes tossed in red onions, chives, Calabrian oregano and basil); and the Tricolore starter (buffalo mozzarella, spicy guacamole and marinated roasted tomatoes on a crisp base).  When Francesco arrived, he rather resembled an Italian version of Marco-Pierre White and quickly filled the room with his good humour and infectious enthusiasm for food.

We were treated to a quick demonstration of how to make the Insalata Semplice, followed by the two of the pizzas that he has added to the menu:  the tomatoless Mia Sofia (topped with mozzarella, a blend of portobello, button and oyster mushrooms infused with truffle paste, chives, Calabrian oregano and garlic); and the Calabrese (slices of spicy Calabrese sausage, fiery green chillies, roquito peppers and hot nduja sausage, all topped with fior di latte mozzarella and watercress tossed in basil pesto).  Suitably trained, we were then all issued with aprons and turned loose on pieces of pizza dough.  Our very patient tutor showed us how to spin the dough around to get the base thin enough, but despite a lot of flour everywhere, my base stubbornly resisted all efforts and remained a good inch too small in circumference.  C’est la vie! Good thing, then, that we were later all given perfectly stretched bases and bowls of toppings to recreate the Mia Sofia and Calabrese pizzas! 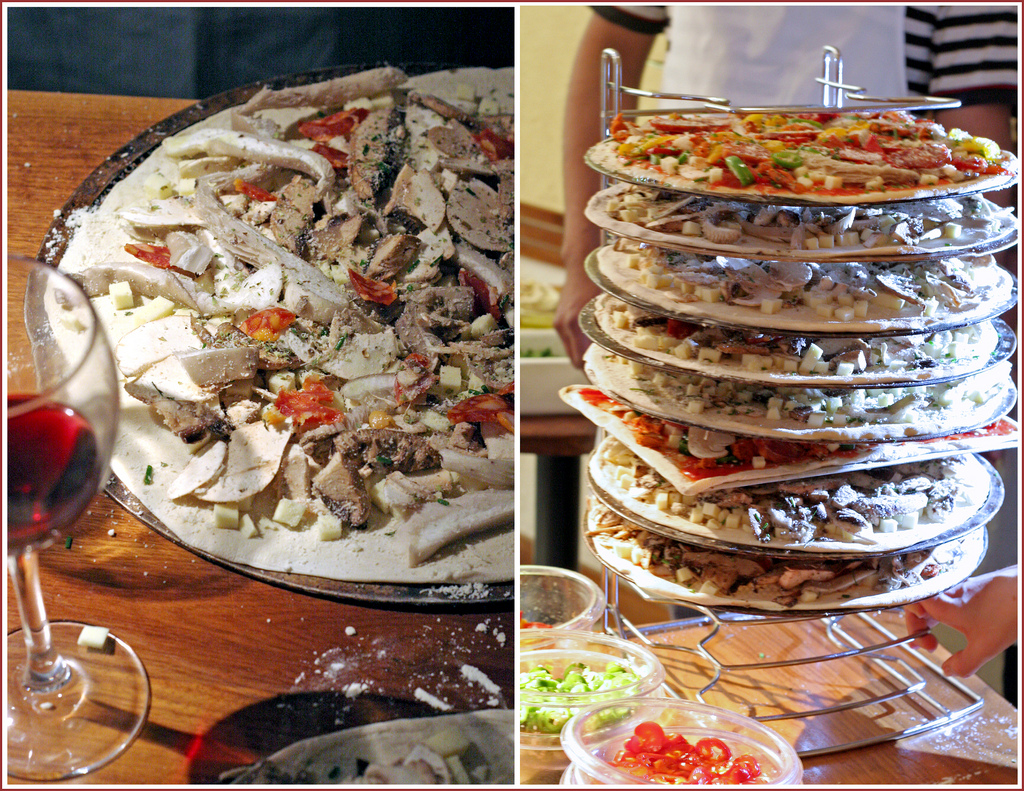 Apart from Mathilde, we also had Food For Think and Ravenous and their respective partners on our table, and I have to say that our poor tutor/supervisor had his hands full.  Nobody wanted to follow the recipe for either pizza – everyone wanted to do their own unique take on the pizzas, using ingredients from both, and general mayhem reigned.  I think we probably got the reputation as the disobedient table!! Once we had all made our pizzas, they were whisked away to be baked and were then served to us in the restaurant, with everybody receiving their own pizza back. I have to say that I love, love, love the Mia Sofia.  Although I have finally got over my childhood dislike of tomatoes, I still love tomatoless pizzas.  Throw in some truffle and garlic flavours and I’m sold.  But the biggest surprise of the night was Nick.  This professed Pizza Express sceptic devoured his Calabrese (with loads of extra hot sausage!) like a starving man and pronounced it excellent!  And subsequently he has been heard to express a willingness to visit Pizza Express, “provided Francesco’s menu is still available”.  Wonders will never cease. Big thank you to Claire and all involved in the organisation of this fun event.