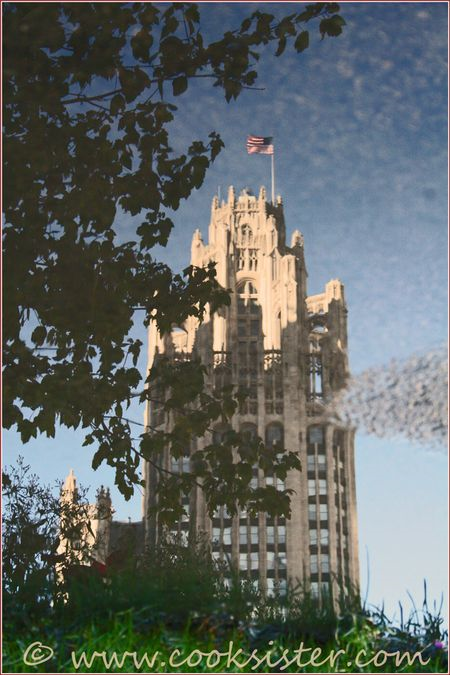 One of the most iconic buildings in Chicago is the famous Tribune Tower.  Completed in 1925, it houses the Chicago Tribune newspaper as well as WGN Radio which broadcasts from a studio with windows onto the street so that you can watch broadcasts.

In 1922, the Chicago Tribune hosted an international competition to find a design for its new headquarters, and offered a $50,000 prize for “the most beautiful and eye-catching building in the world”.  More than 260 entries were received, and the winning design was a neo-Gothic design by New York architects John Mead Howells and Raymond Hood.  The distinctive  buttresses at the top levels are what gives the building its unique shape, but it was the lower levels that I found more fascinating.

Prior to the building of the Tribune Tower, correspondents for the newspaper brought back rocks and bricks from a variety of historically important sites throughout the world. Many of these have been incorporated into the lowest levels of the building and are labeled with their location of origin. Stones included in the wall are from such sites as the Trondheim Cathedral, Taj Mahal, the Parthenon, Hagia Sophia, the Palace of Westminster, the Great Pyramid, The Alamo, Notre Dame, Abraham Lincoln’s Tomb, the Great Wall of China and the Berlin Wall, to name but a few.

This picture was taken as I walked along the Chicago River and caught sight of the building reflected in a puddle left by the previous night’s rain.