You are here: Home / NaBloPoMo 2008 / Zucchini, peppadew and feta bread 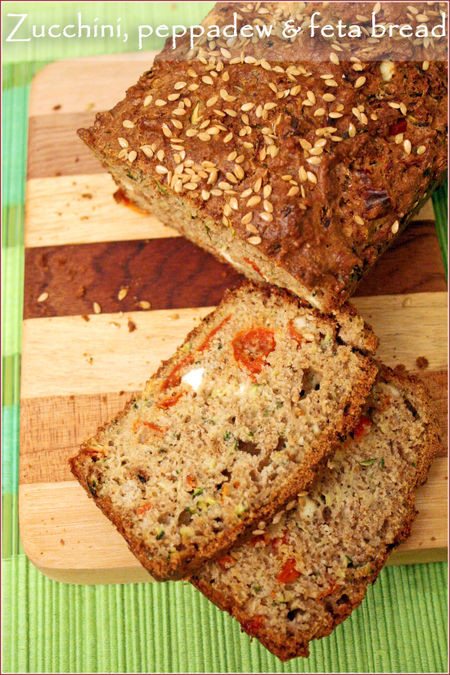 Question: what does a self-confessed non-baker bake when she’s required to bake bread for a worthy cause?

Answer:  something quick, nutritious, and delicious that reminds her a little of home.  And did I mention quick?

Now most traditional leavened breads use yeast as a rising agent, and my problem with yeast is that it takes time.  Time (and skill!) for hand-kneading the dough, and resting time for the yeast organisms to ferment the carbohydrates in the flour (and sugar) and release the carbon dioxide that makes the bread light and fluffy.

But it’s also possible to make bread rise in other ways, such as adding baking powder or beer (which already contains handy carbon dioxide bubbles!).  Or in the case of most quick breads, using baking soda together with an acidic ingredient such as buttermilk.  The reaction between the acid and the baking soda also creates carbon dioxide to make the bread light and fluffy – and the bonus is that this release of gas starts immediately!  No mess, no fuss – and more importantly, no waiting for impatient people like me 😉

I didn’t have to look much further for a recip than my Google bookmarks folder.  Closet Cooking is a site that I’ve only been following for a few months but I find myself bookmarking more of Kevin’s recipes than any other site’s.  Not only does he post mouth-watering photos, but he also posts recipes that seem so achievable that you are tempted to try almost all of them.  I bookmarked his zucchini bread as soon as I saw it, and here I have made a few slight adaptations to the recipe, such as using South African peppadews instead of roasted peppers; changing the ratio of wholewheat to white flour; and adding thyme and linseeds.

The loaf turned out beautifully, with a crunchy crust and a deliciously moist crumb, speckled with red, green and white.  The peppadews really give a bit of spicy zing to the bread, and how can anybody resist feta in bread?  It’s not only delicious fresh from the oven or toasted with butter, but also makes a great open toastie, spread with pesto and topped with tomatoes and cheese.  Thanks Kevin!

Before we get to the all-important recipe, here’s the reason why I was baking.  I have mentioned it before, but the message is important, so it’s worth explaining again: Breadline Africa is a charity close to my heart because it is a South African-based charity that is seeking to put a lasting end to poverty South Africa (and further afield in Africa) by breaking the cycle of poverty and helping comunities to achieve long-term self-sustainability.  Breadline Africa was founded in 1993 when a group of community and social workers in South Africa (who had first-hand knowledge of the uniquely African problems that they faced) formed an alliance with like-minded colleagues in Europe (who were well-placed to source donations in valuable foreign currency).  Armed with this unique combination of skills, Breadline Africa has been able to raise funds in Europe and use their local knowledge to identify which small, ground-level projects in Africa are most likely to succeed with a financial boost.

On Blog Action Day, Breadline Africa launched their Worldwide Blogger Bake-Off campaign.  The aim is to raise $1 million in funds for a project to convert shipping containers into locations for food production and distribution in Africa.  It is hoped that these sustainable commnity kitchens will not only provide food such as bread and soup to those in need, but also opportunities for skills development within poor communities.

So how does the Breadline Africa Worldwide Blogger Bake Off Campaign work?

Quite simply: bake bread, give dough. You can sign up for the campaign, make a donation, upload your bread recipes and document your culinary adventures in the media centre to spread the word. Bloggers can go even further by downloading the Blogger Bake-off widget and tagging five other bloggers to do the same – which I have done.  My five tagged bloggers are:

There are various ways for you to get involved once you’ve joined the campaign, and you don’t need a blog to participate. You can:

Categories in which you can vote for a bread recipe are:

Every donation goes towards the $1 million target, and if you spearhead the most donations (still trying to get clarification on the mechanics of this opaque statement from the organisers!), you earn the honour of having a container kitchen in Africa named after you! Plus you will receive an Amazon voucher of $500. The winners with the most votes in each bread recipe category will receive $250 in Amazon vouchers each. Grease a small loaf tin and pre-heat the oven to 180C.

Mix the flour salt, baking soda, baking powder and herbs in another bowl and then stir this into the zucchini mix.

Pour the batter into your greased loaf tin and sprinkle generously with linseeds.  Bake for about an hour or until a skewer inserted into the centre comes out clean.

Allow to cool on a rack for about 10 minutes before removing from the tin.  Allow to cool for another half an hour or so before slicing, otherwise you risk the bread disintegrating rather than slicing!

Follow me every day in November as I complete National Blog Posting Month – a post a day, every day, for 30 days!

More quick breads on the blogs: